Wherever he goes, Chef Tim Keating raises the level of culinary excellence. His latest success can be found at Urbain 40.

This isn’t a story totally about food.

It’s also a tale of a revisit to Urbain 40, about a year and a half after my first trip and a few months since the chef at that time, Jean-Stephane Poinard, left its kitchen. And it’s the story of a career chef making food his way, whether it is French, Italian or Asian, and making it very well indeed, a chef who has been in Orlando for more than a decade and yet is, in some ways, starting fresh.

Make no mistake, Tim Keating is a big deal, and not just because of his 6’8” stature. He has cooked in the famous (and famously tiny) James Beard House kitchen eight times, and has been nominated four times for a prized James Beard Award. He has broken bread with the greats, from Julia Child to Mario Batali, and still resisted the lure of celebrity chefdom. Unless you’re a diner who follows chefs (and there are a lot them; I hear them talking about the comings and goings of Orlando’s kitchens as I eavesdrop on—I mean, casually overhear—dinner conversations), you probably don’t recognize the name, or might not even care. But he’s had a lasting effect on food in this town by raising the level of its cuisine, first at Flying Fish Café at Disney’s Boardwalk, and now at Urbain 40, perched at the far end of Sand Lake Road’s Restaurant Row. 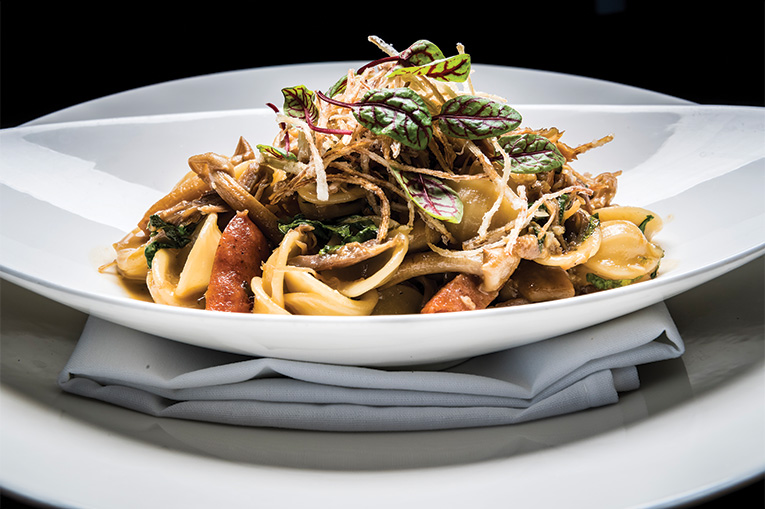 Chef Keating brings a lifetime of experience to Urbain, keeping certain very French items on the menu (onion soup and escargot, mais oui), going farther along the Mediterranean with others (caprese salad, pasta Bolognese) and swinging far into shrimp lo mein and a killer burger.

“The sign on the door says ‘American Brasserie,’ ” he says. “I think it was really wise that when they conceptualized this place that they put ‘American’ up there. We’re going to pull from the flavors, from the melting pot.”

Take his bouillabaisse Provençal ($30), a bowl of Northeastern mussels, clams from Cedar Key and wild-caught shrimp in a multi-layered tomato, saffron and fennel broth with a touch of Pernod. The burger ($19) is from intensely flavored Angus steak layered with pimiento cheese, house-made onion jam and Béarnaise sauce, and one of the best in town. “People kept asking for a chicken Alfredo,” he says. “So why fight it?” His version ($23) combines grilled chicken with marinated artichokes and a very rich Fontina cheese sauce. Also tapping Keating’s international fusion is a seemingly Italian dish of orecchiette pasta, which becomes practically French with duck confit, duck sausage, wilted rappini  and wild mushrooms. It turns into an extra treat when hand-twisted troffie pasta from Genoa is available.

In his career, Keating has gone from diners on the New Jersey Shore to an Orlando brasserie, with stops in California, Texas, Oregon and New York. World travel has been his training ground, as he has absorbed French and Italian cooking, designed first-class dining for Continental Airlines, and explored the local cuisines of Korea, Japan and Kenya. It all goes into his arsenal and appears as togarashi-scented calamari; fresh pappardelle Bolognese; and shrimp lo mein ($26), hearty and umami-rich with fresh noodles, wild Gulf shrimp and aromatics of mirin, miso, lemongrass and ginger. “I never would have thought in a million years that a bowl of noodles would make it here,” he says, “but it sold, people love it. Can I get this bowl of Asian flavors and make a broth that soaks into those noodles and make it right? Yeah, I can do that.”

Keating had a most enviable and rare situation at Flying Fish Café: heading a very popular eatery with almost total autonomous control over what came out of the kitchen, within a company known for its strict policies. It was sort of like the Liechtenstein of restaurants, an independent microstate surrounded by a giant power, but without the mountains. It was satisfying enough that the chef stayed for 10 years, and isolated enough that, like Liechtenstein, unless you went there, you didn’t know much about who was in charge. 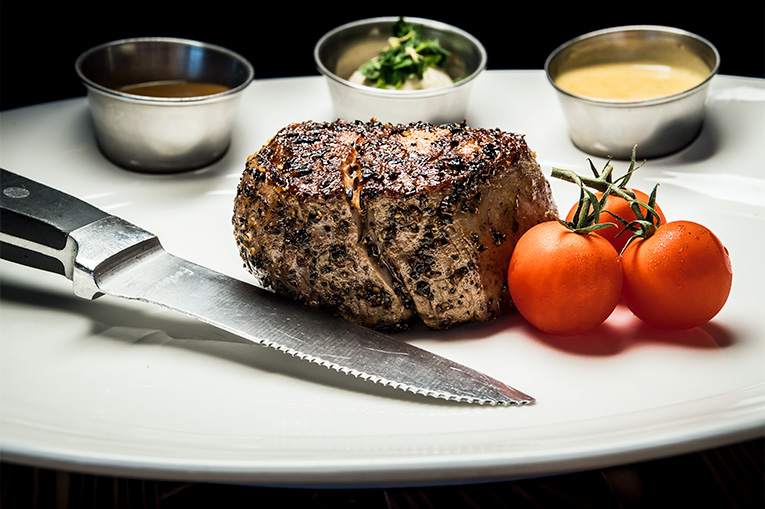 Among the Urbain 40 offerings is the 8-ounce filet (ROBERTO GONZALEZ).

The comfortable status quo changed in January 2016, when Keating left Disney. He fielded  offers until this year, when Jaafar Choufani, who owns Urbain 40 and Paradiso 37 at Disney Springs, asked him to direct and revamp both operations. And then, two days after Keating’s arrival, Chef Poinard resigned, which left Keating to run the Urbain kitchen.

Since then, Keating has flown to Morocco to teach the crown prince’s staff how to make char-crusted steak and Texas barbecue, and perused the Paradiso menu with an idea of updates. And he has re-entered the larger public eye, hopefully garnering the attention he deserves. When you eat at Urbain 40 now, you’re benefiting from years of experience brought by a self-taught kitchen alchemist. It is sure to be a satisfying visit.