Chef Venoy Rogers’ restaurant is “all over the place’’—Italian, French, Asian, deli you name it. And that approach works marvelously. 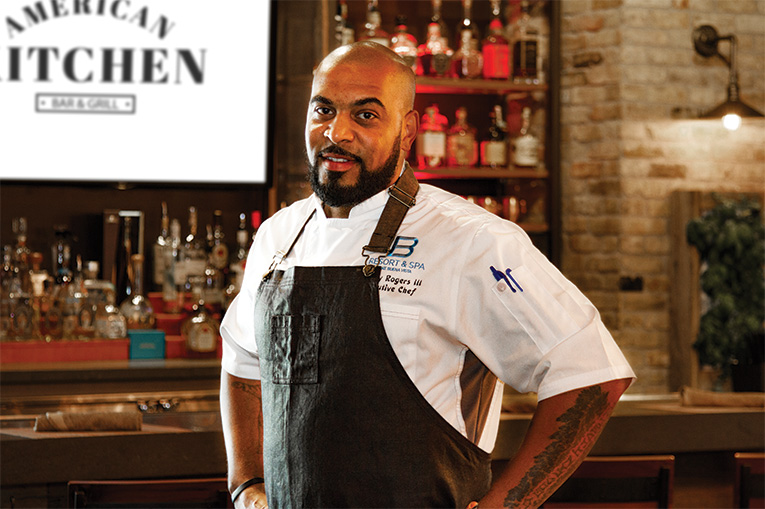 “Whatever inspires us, we use and you’ll see on the menu,’’ Chef Venoy Rogers says. The results are delectable. (AMERICAN KITCHEN BAR & GRILL)

In a universe of restaurant categories, “American” seems to be the broadest and most misread. Burgers and steaks, surely, but do tacos, or pizza, or for that matter General Tso’s chicken, chop suey or the Cuban sandwich, all American creations, fall under the American label? The salad dressing aisle might proclaim French and Russian, but they’re from the good ol’ USA.

The truth is, the melting pot also comes in sauté pan and griddle sizes, encompassing the entire American experience, and Chef Venoy Rogers, at the helm of the American Kitchen Bar & Grill at the Disney-area B Resort & Spa, knows that very well. Take for example his Truffle Chicken Alfredo ($25), a quintessential “Italian” dish that has only seen Italy as an import.

Rogers’ version heralds back to the original Roman inspiration, with house-made pasta infused with mushrooms and truffles, enrobed in a lush black truffle cream sauce and adorned with more shaved Italian truffles (white in season). The organic chicken on the side is lightly coated and seared to delicate perfection: this abbondanza di tartufo is quite a dish. (For the detail-oriented in the audience, yes, pasta in bianco—pasta in white sauce—formulated by one Alfredo di Lelio, is made in Rome, but the Alfredo we know of heavy cream, butter and cheese is definitely foreign there. And adding chicken is practically blasphemous.) 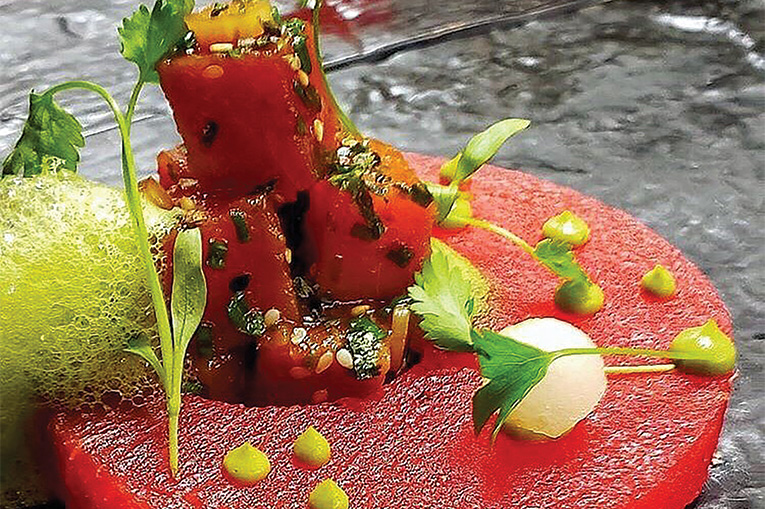 Rogers has been steering the kitchen at American Kitchen for three years. Originally Giraffe Café at the Royal Plaza Hotel, both resort and restaurant were rebranded several years ago, with American Q spotlighting farm-to-table offerings, complete with a red farm flatbed truck at the door and a rodizio-style steakhouse menu, massive helpings of in-house smoked meats presented by never-ending parades of servers with iron skewers. The skewers are gone (the truck, incongruously, is still there) and the caliber of cooking has soared, thanks to the peripatetic Rogers.

Born in Southern California, he grew up in Oklahoma, the child of a career Marine and a Brazilian mom. “When I was a kid,” he says, “I tried to cook because I wanted to eat, I wanted to taste good stuff. I spent several years in Japan as a kid, and growing up, nobody in our family was just from Texas or something like that; we had German and Filipino and all kinds of influences in food. Great people and great food.”

He found culinary school at 27 after a career in sales at AOL, but had been watching food TV most of his life. “Getting those knives and that white uniform, I was ecstatic.” Kitchens in Oklahoma City, San Diego, Vermont, Arizona, Colorado and Miami followed and exposed him to varied styles.

Rogers’ experience brings those influences to the table. “We’ve slowly started to make a name for ourselves and put this restaurant into the conversation with the other amazing restaurants in the city.”

Take the tempura avocado “small bite” ($11), a dish Rogers says he’s been carrying with him for more than six years. A wedge of still-firm avocado is coated in a light, crisp tempura batter, topped with a dollop of sweet/spicy tomato-chipotle jam and anchored by a layer of cilantro and lime suffused crème fraiche. If you like avocado you’ll love this; if you’re not a fan this is a great way to change your mind. 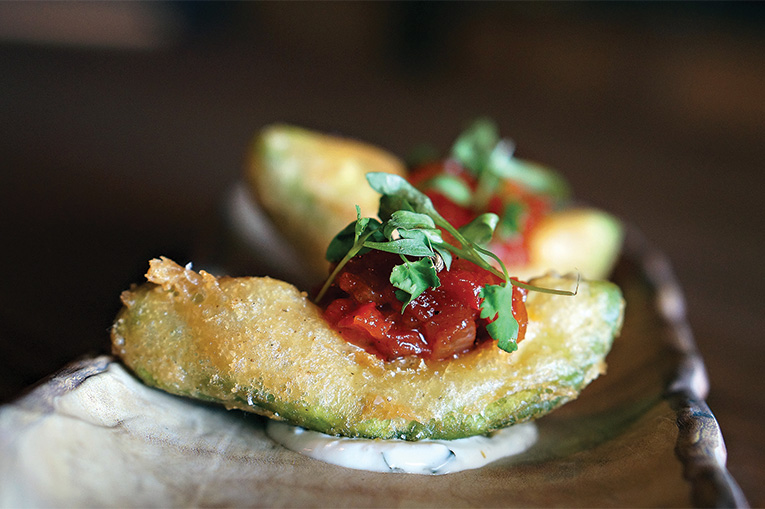 Rogers’ palate runs to umami, the deep rich taste of well-aged meats, mushrooms and aged cheeses throughout the restaurant. I got a sample of an item just entering the menu, his take on deli style, the Knuckle Sandwich. Aged Wagyu beef knuckle is marinated for four days, smoked, steamed like uber-pastrami, then layered on a challah bun with Wagyu beef fat aioli and lacto-fermented pickles. Deep, deep, deep. Even the chips are house made and darkly rich (and great).

“My style, I have to say, is true American,” he says, “because I’m all over the place. Whatever inspires us, we use and you’ll see on the menu. There’s everything from Asian stuff to true American classics with a spin. It may have a French technique, an Asian ingredient, Middle Eastern spice or something like that. We embrace that.”

Rogers says he’s greedy; he wants to be “your steakhouse, your sports bar, your artisan restaurant.”

“I want you to leave with no socks on,” he says.

Rogers tailored chef’s table menu is an American take on Japanese omakase (chef’s choice or “trust me”). With a two-week advance, chef will customize a meal of six to 10 dishes to each diner, starting at $100 per person, which could include exotics like koji cured local wild boar belly tortellini, or a jewelry-like cured tuna and yuzu compressed watermelon.

The Top 8 Best Ashwagandha Supplements on the Market