Food & Drink: A Twist on Tradition

Mia’s Italian Kitchen, in the shadow of The Wheel, excels at most offerings, including the beef Bolognese and chargrilled branzino. 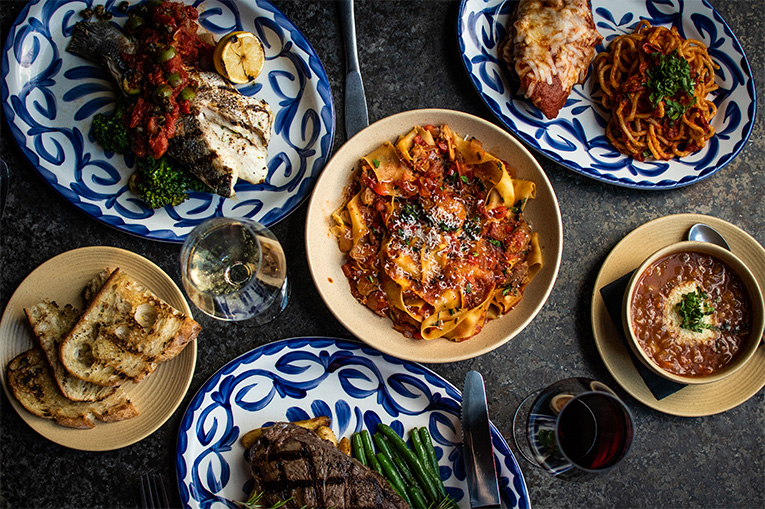 The age of the indie, handcrafted eatery has alerted restaurants both big and small that attention to ingredients and preparation can be, frankly, a moneymaker. And Mia’s Italian Kitchen has learned that lesson.

Part of a conglomerate of lounges and restaurants that includes the perennial International Drive diversion, Café Tu Tu Tango, Mia’s is a 500-seat big box, perched within view of the The Wheel at ICON Park (or whatever the “Orlando Eye” will be called by the time you read this). Pastas, as well as bread and sausage, are made daily, and they are done well. Sauces are also in-house, bright and well-rounded with good Italian plum tomatoes cooked for hours. They’re listed as San Marzano on the menu, but I was told by the sous chef that they’ve switched to the Ciao brand, which might not be certified San Marzano but are grown in the same volcanic soil near Naples. And if I hadn’t been told I wouldn’t have known by the taste.

Mia’s is an interesting space, brick and high windows reflecting a modernist idea of an Italian trattoria, with reproductions of Veronese and Caravaggio adorning the ceilings, and modern abstracts lining the walls. A bar that could have come from a 1950s Bertolucci film, all well-worn greens and leather seats, would do nicely in hip Winter Park.

Interestingly, regional executive chef Brandon Whitestone calls the food “an American twist on classic Italian food,” which basically describes what most people think is Italian food anyway. Waves of Italian immigrants came here through the 19th and 20th centuries, families primarily from Sicily and the south escaping the uncertainties of Italian unification and the onset of war. Adapting to their new country and its new ingredients meant adapting family recipes, and the further food gets from its origins, the more the food changes. What we consider “classic” Italian, like chicken Parmigiana, spaghetti and giant meatballs, and of course pizza are substantially different from their Old World counterparts, if they exist there at all.

On the other hand, looking back to a cuisine’s origins and then taking a New World spin is as valid as reinventing a Bach fugue as rock ’n’ roll. At Mia’s, there’s a little of both.

On a somewhat negative side, the giant meatball is there (called The Giant Meatball; $13), a 12-ounce, all-beef tennis ball-sized orb served with marinara and stuffed with, as they say, fresh mozzarella. I can’t recommend it; the cheese is the dry version that’s used to top pizza and turns rather chewy once inside a ball that’s braised for more than two hours. And being the Neapolitan pizza snob that I am, Mia’s pizza left me unimpressed: the dough is par-baked in a pan and then finished in the oven to order. A square “slice” is $6.50 to $7.50.

But the artisan approach is strong at Mia’s, and Nonna Filomena would be proud. I’d go there again for a good bowl of pasta any time.

The word “bottomless” plays large at Mia’s. Saturday and Sunday find the Bottomless Brunch ($26 per person) of small plates (meatball Benedict?), salads, pizza and pasta. Weekdays allow guests to indulge in the entire rather extensive menu (with two exceptions) for $34 per person during Bottomless Dining (save the jokes, please). Considering a typical app-and-entrée could put you back $40 or more, it’s a bargain.