At Urbain 40, Chef Jean-Stephane Poinard draws on his expertise and that of generations before him to create out-of-this-world French dishes.

Jean-Stephane Poinard is the product of 100 years of French tradition.

“All of my family,” says the chef of the Urbain 40 brasserie on Sand Lake Road, “including the meaning of my last name (a poniard is a small knife) is related to food. I’m at least the fifth generation chef in the family.”

The 47-year-old Poinard invents exceptionally crafted versions of classic Lyonnais dishes with locally inspired twists within the gleaming steel kitchen of Urbain 40. Bread baked fresh every day, house-made terrines, cured meats and pasta, and dry-aged local beef are some of the signatures of his exacting menu.

“It takes time to make food the proper way,” Poinard says. “That’s what French people do. It’s why we take two hours for lunch.”

And lounging over this kind of lunch—and dinner—is a grand idea. An hors d’oeuvres of salt-crusted mussels ($12) is enough for a meal, the Prince Edward Island shellfish roasted in a cast-iron skillet, the salt absorbing moisture so they roast instead of boil. Mussels arrive plump and tasting of the sea; regrettably the excess salt makes it difficult to enjoy a potentially delicious pan broth.

Poinard does wonders with the classic Billi-bi soup ($10), a creation of Maxim’s of Paris in the early 20th century. The mussel soup is alive with saffron, smoked paprika oil and plentiful cream, and Poinard twists the recipe by adding a beignet-encased mussel, à la New Orleans.

The chef believes in the effect of climate and soil—the terroir—of not just wine but also food, and seeks out local purveyors of meat and produce. His seemingly simple Bolognese ($19) is based on traditional Italian pasta al ragu, made not with ground meat but slow-roasted, wine-braised local beef and pork butt, fresh marinara sauce and cream. Served over pappardelle pasta, it is a pleasure about which both Italian nonas and French grand-mères would agree. 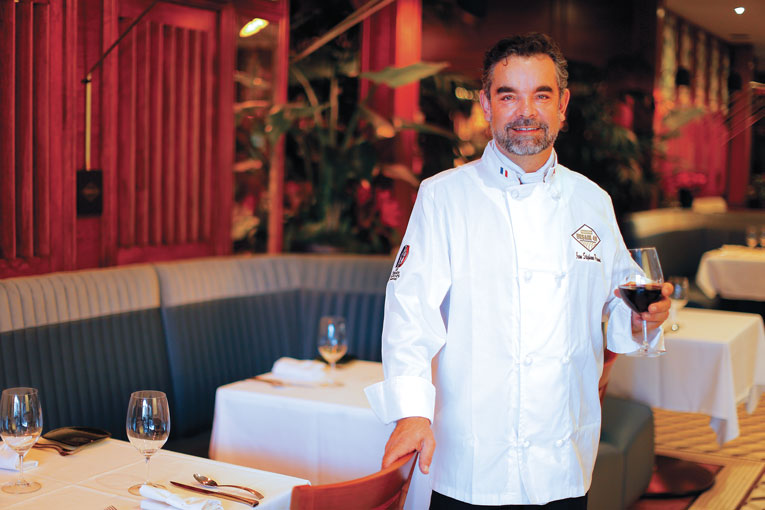 It’s hard to put a finger on French cuisine,” Poinard says, “because there are so many different types.” His hometown of Lyon has been called by author Bill Bruford, “the gastronomic capital of France and the world.” At a crossroads in central France, the town prides itself in wines from the Rhône Valley and Beaujolais, chicken from Bresse (and, according to strict Appellation Controllée regulations, only from Bresse) and famed cattle from Charolais. “Because we are in the middle of the country, Lyon gets influences from every part of France,” Poinard says. “The South cooks with olive oil, the North butter; in Lyon we use both.”

When Poinard cooks the classics, his heritage and training shows. The pate de Campagne (country pate, $9), is a classic rustic terrine made with several different cuts of house-cured pork and pistachio. Robust and deeply flavored, it’s particularly nice spread generously on Urbain’s bread.

Even something as straightforward as a burger becomes a French dish under Poinard’s care. His steakburger ($18) tops sirloin with McCall’s Irish Cheddar, a house-made onion Jam and fresh Béarnaise sauce. “It’s not just a burger,” he says. “It’s a very good burger.”

Poinard was not only, to use a cliché (which, after all, is a French word) born into restaurants, but baptized in the dining room of his parents’ Lyon eatery, the famed Hotel-Restaurant de Paris. Spanning generations of restaurateurs in Lyon and Ardèche, his family has been called one of France’s great cooking dynasties, and his youth was spent living in a hotel room above the restaurant and afternoons in the kitchen. “I played with not Play-Doh, but real dough.”

After flirting with careers in veterinary medicine and law, Poinard joined the family business and owned five restaurants in France before coming to America. “My father told me ‘try what you want. You’ll always be crazy enough to be a chef.’”

In 2007, with young children in tow, he moved to Florida and, like French explorers more than 400 years before him, discovered St. Augustine. He opened the bijou Bistro de Leon, serving crepes, slow-cooked classic onion soup and mussels in wine sauce.

Selling the business in 2015, Poinard connected with another culinary dynasty, the Choufani family. Jaafar Choufani owns Urbain 40 and is the son of restaurateur Rashid Choufani, who developed Samba Room and the much-missed Timpano, both formerly on Restaurant Row. His Boulevard Restaurants corporation still runs the restaurants at Epcot’s Morocco pavilion and Paradiso 37 at Disney Springs.

Poinard is running a bouchon, an intimate rustic inn serving traditional Lyonnais cuisine, inside a well-appointed high-end restaurant. He is the happy, welcoming kind of French chef—not the brusque, throwing cutlery kind—meeting guests, both just arrived and already food- and wine-sated, with a glad handshake and his très charmant accent.

“A chef sells pleasure,” Poinard says, and it is a pleasure to have him and his kitchen in Orlando.

​Like Timpano before it, Urbain 40 has a big-city, 1940s private club vibe. Combining several rooms for intimate or group dining, the rich woods, linen tablecloths and live jazz by engaging local musicians adds to the illusion, and the open kitchen is televised on a big screen for those interested in the action within.