At Sushi Pop in Winter Park, Chef Chau Trinh refines the concept and menu that has made his Oviedo restaurant a favorite. And the results are superb.

When the Japanese restaurant Sushi Pop opened in 2011, it was brash and hip, crackling with costume-wearing servers and nonstop anime videos, a grab-you-by-the-lapels wake-up shake to the, frankly, rather sleepy city of Oviedo. Chef Chau Trinh (just “Chau” at the time) brought expertise from a lifetime of kitchens to serve sea urchin and gold leaf-accented sashimi, sauces touched with molecular gastronomy and sushi combining techniques from Japanese, French and Korean cooking.

It eventually became a smash hit, with diners lured by the sophisticated food lurking just below the cartoon atmosphere. When Chau announced last year that a second location would open in Winter Park, just off tony Park Avenue, there were squeals of disbelief and delight. 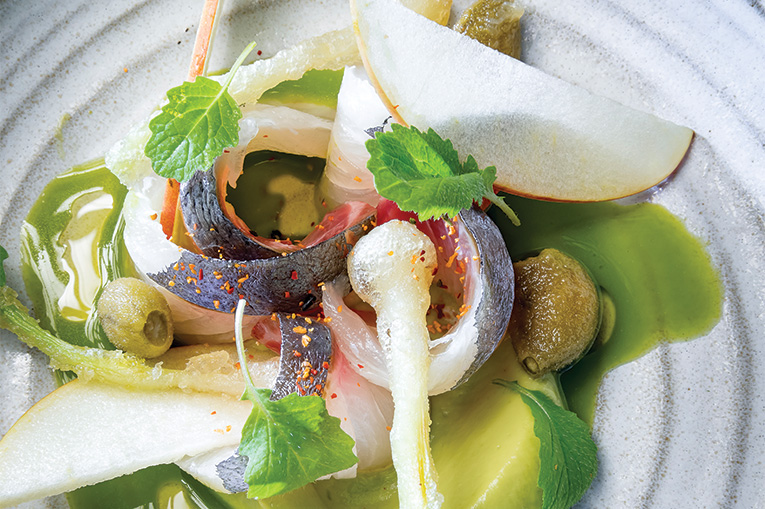 But for some patrons, the reality of SPWP is a bit . . . disconcerting. It is a different animal than the original, an “adult” version that shows not just on the skin but also in its refined menu. Oviedo’s cooking is remarkable; Winter Park’s is a revelation.

“We’re so overhyped,” says Chau, a 2013 inductee into Orlando magazine’s Dining Hall of Fame. “The bar was so unrealistically high for Sushi Pop in Winter Park, people thought they were going to have fireworks shooting out of their fish, that it would play music.” He looks out the glass doors at strolling shoppers, some peering in to check out the newcomer. “Maybe that is our fault; maybe we should have rebranded it. But I don’t think just having a name should dictate how you cook, or the style, or the culture.”

Not that Chau has ever placed limits on how he cooks. The Winter Park menu offers esoteric cold and hot tastings, such as octopus with Spanish Iberico ham lardo and sunchoke chimichurri, a Japanese version of smoked lox and tortilla “everything bagels,” and gorgeous “Pop-cakes” of octopus and scallop pancake with kimchi ($11 to $14).

Select sushi rolls are spotlighted, such as the fascinating Rising Sun ($14) of tempura green beans and tuna, topped with Japanese scallops, daikon sprouts and orange chili sauce. “Winter Park is sort a refined version of Oviedo,” Chau says. “Less rolls, say 10 rather than 15 or more. We really want you to experience the quality of the fish. When you have a really great piece of fish, you’ll remember.” The nigiri and sashimi menus expand on really great (and beyond typical) pieces of fish: king salmon and trout belly, sea perch and butterfish.

The restrained and very Winter Park-y interior may surprise those familiar with Oviedo’s eye-popping everything. Here, sleek Japanese architecture, clean lines and muted hues reign, with fascinating pops of color like a fuchsia tree and a neon sign that says “come what may …” (“It was our song at my wedding,” Chau says.)

“We did some amazing things in Oviedo. We knew we were committed to quality, but we didn’t know the level of teaching we had to do for our guests … teach them how to eat things, and try new things they didn’t even know they wanted.” He pauses. “And it took a while. You want to get to a point where they’re like, ‘We don’t care. We trust you.’ And we’ve reached that point in Oviedo. Winter Park is about being able to push that boundary a little bit more. With this restaurant, we’re able to focus more on the fish, more tasting menus, omakase, special dinners, and be able to pull those things off.”

“We wanted a grown-up version of Oviedo,” he says. “We didn’t want a copycat.”

Several days after our conversation, I returned to Sushi Pop-Winter Park to sample that focus with an omakase, where the diner surrenders control to the chef. In the hands of a chef like Chau, it is transcendental, a rock star view at the bar of razor-sharp knives, exotic and often rare ingredients, and a combination of talent and taste that distills Japanese cuisine to its finest. At least a dozen small, often one-bite courses (after a while it was hard to keep track of the number) brought tastes and textures that could revive the interest of even the most jaded eater. Sweetheart oysters followed by Japanese bream. Bluefin tuna. Shima-aji striped jack belly. Tenderloin carpaccio with diver scallops. Uni from Peru, California and Japan became a lesson in terroir and texture. Three different tunas, with an instruction to “eat it as soon as I put it down, one bite, immediately.” Tasmanian trout belly drizzled with barrel-aged maple syrup. An extraordinary display of curation from an extraordinary chef. Fortunately for everyone, these ticketed marvels happen once a month, 16 seats at a time, for $135 a person.

Of course, being in Winter Park also means Sushi Pop is not alone anymore.

“I don’t mind competition,” says Chau. “It breeds pushing boundaries. It makes me work harder. I’m pretty comfortable in Oviedo. This new baby,” he laughs, “requires a lot of attention. You don’t know sometimes why it cries, you don’t sleep a whole lot, and then you’re happy but then you’re crying. We’re still growing.”

Since his days working in his mother’s restaurant when he was seven, Chef Chau has observed, absorbed and endeavored to elevate what comes out of the kitchen. With the new Sushi Pop, he’s getting very close to the penthouse.

ChauHaus, the lunch service within Sushi Pop WP, runs Wednesday-Sunday, shifting the kitchen’s focus some 2,500 miles from Japan to Vietnam. “I grew up with this food. These dishes come directly from my mom’s kitchen.” The casual presentation of what Chau calls “Southern Vietnam’s greatest hits” is sophisticated cuisine, reflected in Chau and mother Mai Tran’s renditions of phó, based upon rich, complex soups like 16-hour beef broth and a chicken stock alive with star anise, coriander and cardamom; generous rice and noodle bowls; and Saigon-worthy bánh mì with baguettes developed with Olde Hearth Bread Co.