Take the name of Seito Sushi in Baldwin Park at face value and you might expect just another sushi restaurant. Which would be a shame, because it is far more.

Under the ownership of Jason and Sue Chin, with a menu crafted by Executive Chef Austin Boyd, Seito has been transformed over the past year from a predictable sushi roll place into an inventive, daring and sophisticated pan-Asian restaurant with a grounding in Japanese cuisine. And it is primarily due to the vision of Jason Chin. 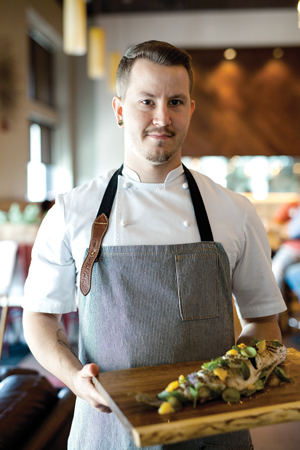 While superb sushi and sashimi combinations do grace the menu, distinctive combinations and exotic and labor-intensive ingredients such as bourbon barrel-aged soy or watermelon marinated in plum wine often excite a dish. Made-from-scratch ramen, entrees spotlighting Japanese root vegetables, Korean bo-ssam pork and clever takes on traditional chirashi platters please the eye, the palate and the imagination. It’s hard to find anything less than exquisite.

Seito’s metamorphosis began with Chin’s discontent with the menu his parents, Seil and Misun Chin, established in 2000 at the first Seito in Winter Park Village. “I didn’t really have a choice,” Chin, who was 17 at the time, says of his involvement. “It was ‘we’re opening a restaurant and you’re going to be washing dishes.’ ”

Both from Korea, Mom was a nurse, and Dad had tried his hand at different businesses, from dry cleaning in Chicago to tropical foliage nurseries in Apopka. Seito Baldwin Park opened in 2005, back when the development was a curiosity and New Broad Street was an unpaved road, and Jason discovered his new passion, not in the kitchen, but as its owner.

Ten years later, it was time for change. “I got bored with having the same kind of food as almost everyone else in town,” Chin says. Exposure to restaurants like Japonais in Chicago and San Francisco’s Ozumo, with their impeccable service and refined atmosphere, showed him what a sushi restaurant could be in Orlando. Only the name remained the same. (“It’s a derivation of my Dad’s name, and the history and that journey means a lot to me.”)

Chin’s choice of chef, a former Dragonfly Sushi employee from Tennessee, was found while the Chins were staffing their new restaurant, Osprey Tavern just across the street. (The Seito on Sand Lake Road is owned by Eric and Jennifer Springer, Jason Chin’s sister.)

The metamorphosis came at a price. “I think I was too eager,” Chin says. “We pretty much ruined it overnight, almost completely eliminating the sushi and bento box offerings to get people to try our ramen.” It was a hard lesson and led to slower and less radical readjustments, but over the course of the last year almost all of the Seito menu has been overhauled.

Ironically, Chef Boyd’s ramen is not only one of the best things on a menu of great things, but it won this year’s Ramen Rumble competition, pitted against creations by Sushi Pop’s Chau and Greg Richie from Soco. Every ingredient, from noodles to impeccably flavored broth, is from Boyd’s hands. The expansive ramen bowls ($14) come in tonkotsu (“pork bone”) or shoyu (“soy chicken”) versions, slow-cooked heady broths pulling flavors from roasted bones and rich aromatics, swimming with braised meats, Lake Meadow eggs, and superb noodles worthy of the classic movie Tampopo (find it online).

To-share plates called izakaya reveal Seito’s playful side: braised chicken and Korean bbq bao; marinated tongue, roasted mushrooms and fried green tomatoes; grilled collards and bok choy garnished with a fried egg ($6 to $15). Boyd uses cucumber flowers or fiddlehead ferns as garnishes, but ones that elevate the taste of the dish. Teriyaki chicken ($18), glazed in house-made tare and served with charcoal-charred vegetables, and bulgogi ($19), grilled marinated Korean beef, may be familiar in name, but these taste combinations are countless levels above the standard.

And yes, sushi. Yellowtail nigiri, dressed in soy aged in a bourbon barrel for a year; eel topped with charred Asian pear; and sashimi servings of Faroe Islands salmon, Norwegian mackerel or Japanese snapper redefine how raw fish tastes ($3 to $15). The chirashi items (meaning “scattered”; $22-$30) are beautiful arrangements of seasonal fish atop seasoned sushi rice—and some of the best plates in Orlando.

Without being hands-on in the kitchens of Seito and Osprey Tavern, Chin is their executive chef, his imprint and taste level reflected in both restaurants with a mindset that looks beyond the implied parochialism of Orlando or Baldwin Park and sees the potential of world-class dining in every dish. And he’s done it by bringing in two dynamic chefs and giving them almost unlimited freedom. “For the longest time, I was the one who was the best,” Chin says. “Now I have employees who are better than me, who have more experience than me, and that excites me because I’m learning again.”

“There’s still a lot of work yet to be done,” he says. I look forward to where that work leads. In the meantime, I’ll be back to Seito.

There are a lot of chef’s table experiences in town, but Seito’s unique table in an alcove in the dining room was literally built by Chef Boyd himself. There, the omakase (chef’s choice) tasting becomes a dazzling feast of exclusive dishes that appear courtesy of the chef’s whim and the freshest ingredients of the day. $85 per person, with three days’ notice.