Russell’s on Lake Ivanhoe: What To Get

The upscale casual restaurant has quickly become a mainstay for locals. 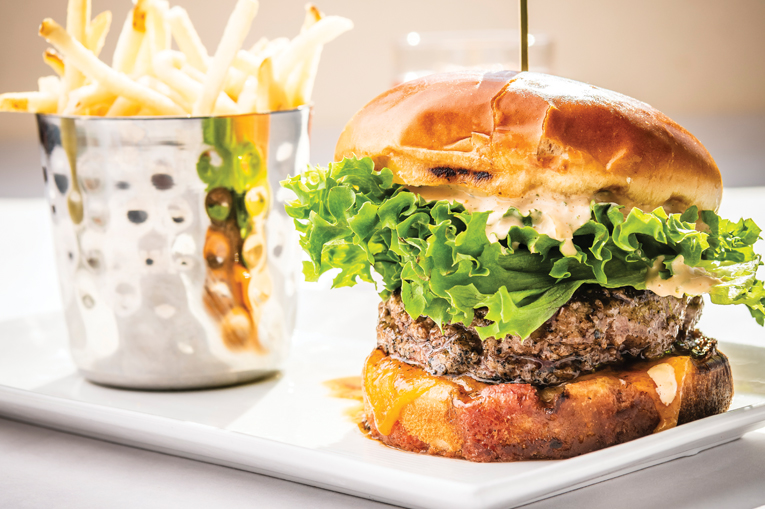 Russell’s Royale with Cheese is served with House Fries and is already a crowd pleaser. ROBERTO GONZALEZ

While taking in the view from Russell’s, it’s easy to see how Orlando came to be nicknamed The City Beautiful.

The restaurant sits near the banks of Lake Ivanhoe. The compact building’s western-facing picture windows offer stellar views of the lake, which is bordered on its other side by bustling I-4. It’s a curious juxtaposition, with tranquil lake views in the foreground and busy motorists whizzing to and fro in the distance. To the south, there’s a lovely playground situated in a neighboring park, where it isn’t uncommon to watch families with young children play, or to see patrons taking a post-meal stroll.

This is bustling Ivanhoe Village, the city’s art district, where antique stores and locally-owned shops thrive. And in short order, Russell’s has become part of the landscape. But to say that the road to success has been smooth is to glance over the events of the past year.

The future seemed bright when Russell’s on Lake Ivanhoe—so named for George Russell, who built a pineapple plantation and an amusement park in the area at the turn of the twentieth century—opened September 2020 in the space previously occupied by Mesa 21. Owner Philippe Villain envisioned a restaurant that served elevated cuisine in a comfortable setting. “It’s about high-quality, value for the customer, and it’s about treating people properly—both our staff internally but also the consumer,” he shares.

Villain set to work creating such a place, and he knew just the chef for the job—Emmanuel Clement. The two had worked together in New York City in the 1990s and had kept in touch, intersecting at various points throughout their careers, working for the same companies more than once. “We know each other, we trust each other like brothers,” explains Villain. When he reached out to Clement, it was perfect timing; the chef had just sold his restaurants in Mallorca. Villain asked Clement to come to Florida and take a look. “So I came over and spent a week here with Philippe. And I said ‘Alright, I’m in.’” Three months later, Clement moved to Florida and he and Villain went to work crafting the vision for Russell’s. 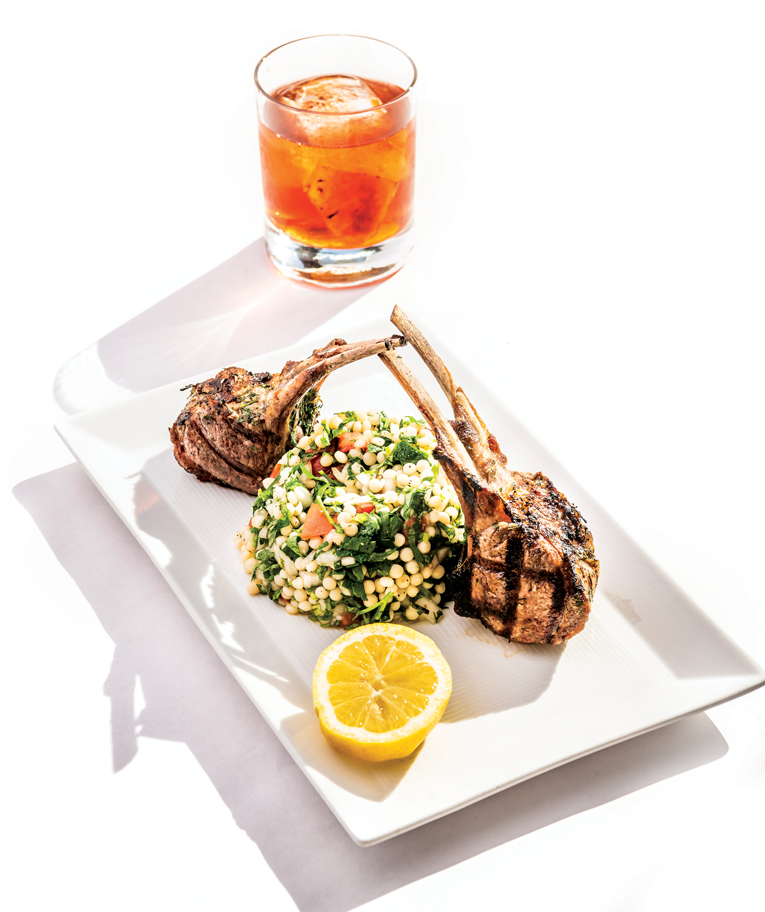 The French influences are unmistakable. To begin, both Villain and Clement believe that dishes should be made from scratch. Villain points out that Chef Clement makes all of the charcuterie, stocks and sauces in-house. “Stocks are your base. You can do whatever you want; if the stock is good, your sauce is going to be good,” Clement explains.

Getting the food right is important, but Villain also wants to ensure that customers feel comfortable and welcomed from the moment they step in the door. He feels that fine dining is, for the most part, a thing of the past, but one can still have a memorable meal without all of the fuss. “There’s pleasure to be had with really awesome food and experiences but it’s just got to be done in a more casual way,” he says. While tables in the airy dining room are dressed with white tablecloths and cloth napkins for dinner, lightly-stained woods add warmth to the space. The young waitstaff have a warm, welcoming attitude, and are ready to guide you through the menu with recommendations and advice.

When I recently dined at Russell’s with a party of seven friends, we weren’t disappointed in terms of food or service. Such a large party afforded us ample opportunity to try a broad range of the dishes, and the waitstaff were attentive to our needs from beginning to end.

While both Villain and Clement enjoy executing quintessential dishes accurately, they also want to surprise and delight their guests. Examples of both classics and twists on popular plates are evident across the appetizer menu. We couldn’t resist the opportunity to try the Tuna and Avocado Tartare, served in the style of poke with its marinade of soy and ginger. We were equally pleased with the Calamari. Rather than offering the popular starter deep-fried, Chef Clement gently sautes the small squid in garlic and parsley to complement its delicate flavor and texture. Another favorite dish of the table was the simple Scallop Ceviche, with slices of scallop dressed in an herbal vinaigrette. Finally, the Roasted Beets and Burrata Napoleon was a stellar combination of fresh, rich earthy flavors.

The menu’s French influence is also apparent with respect to main dishes. A friend who chose the Duck Confit gave the tender dish rave reviews, while another friend tucked into the meaty Grilled Swordfish. While the fish was certainly well prepared, the star of the plate was a creamy, tangy beurre blanc accented with lemony sorrel. For my selection, I chose Roasted Rack of Lamb, a dish that will change seasonally. I was treated to the summer version, served alongside Israeli couscous dressed with a bright, fresh tabbouleh. Other friends gave high marks to Shrimp Linguine, with its creamy spinach-parmesan sauce, and Russell’s Royale with Cheese, the house burger. 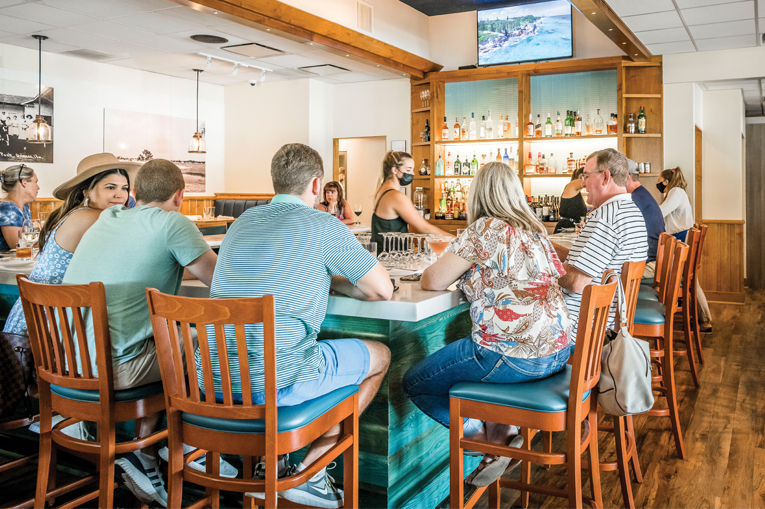 Here, I pause for a moment to further elaborate on value, which is something that’s important to Villain. Most main courses come with two sides, instead of sides being offered a la carte. From the beginning, he felt that offering choices for sides not only represented good value, but also didn’t limit the customer. “Customers have the freedom to choose, and to customize. I have seven different things, and you pick.”

While our meals were certainly satisfying, we couldn’t resist trying two of the restaurant’s most popular desserts. The White Chocolate Bread Pudding, with its whiskey sauce, was a crowd favorite. But Russell’s also pays homage to its namesake’s favored crop, the pineapple, with the Signature Pineapple Foster. Served atop caramelized banana bread, it’s rich and substantial enough to share.

And there’s so much more to enjoy. While the restaurant isn’t currently open for lunch, brunch on both Saturday and Sunday has proven to be a popular draw. The Mrs. Croc is Russell’s take on the classic Croque Madame, combining ham, Gruyere, bechamel and a fried egg. Sweet treats such as the Cinnamon Roll Waffle and Bananas Foster French Toast also have their fans. 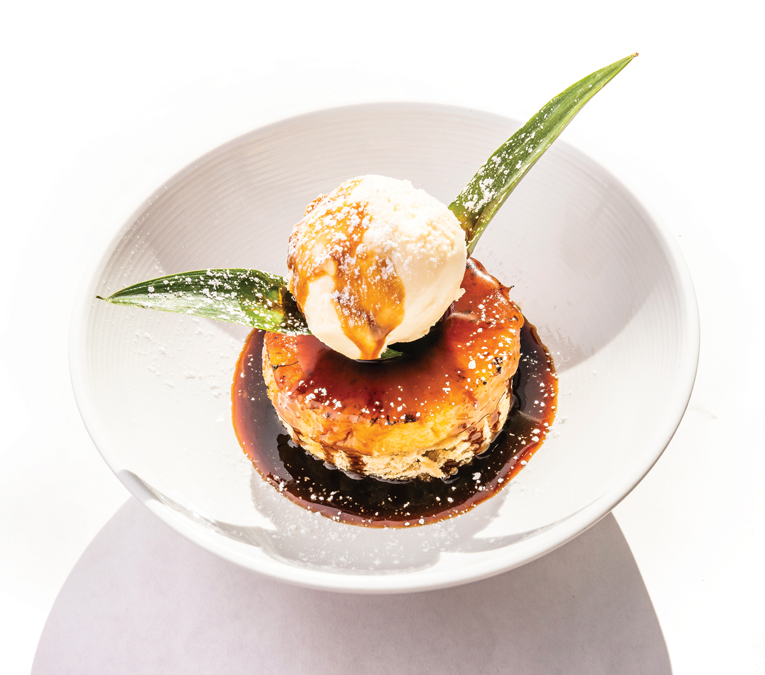 Save room for a special dessert, like the Signature Pineapple Foster, served on caramelized banana bread. ROBERTO GONZALEZ

Happy hour is gaining quite a reputation as well. And why not? Small plates such as Potato and Bacon Cheese Croquettes and Pork Belly Bao (both options at press time) are the perfect snack to nosh on alongside a specialty cocktail, like the House Pineapple Old Fashioned. Happy hour also provides incredible value, with wines for $5 a glass (including some lovely French options) and cocktails for $6 each. Beers from neighboring Ivanhoe Park Brewing Co. round out the offerings at $4.

While opening a restaurant in 2020 wasn’t easy by any stretch of the imagination. Villain and Clement feel optimistic about the future of Russell’s, noting that locals have embraced them, and he sees many repeat customers on a regular basis. “They come here and they’re happy to support local. They don’t want to go to the big chains. And I think that’s been even louder in this tough time. It’s pretty nice to hear, in a bad time, that people want to support the little local guy. It’s good for me. I like to hear that.”

Where do the pair hope to go next? The sky really is the limit. While regular customers already voice loud votes for their favorite dishes (“Please don’t ever take the filet off the menu!” one recently said), Villain and Clement want to continue to wow and surprise diners. They know that starts with trust. “And once we have their trust,” shares Villain, “let’s walk them down the culinary road, and we can get a little more daring with experiences. But they’ve got to trust you first.” Adds Clement, then, “There’s no limit what you can do.” I, for one, am ready to go along for the ride.