Orlando BBQ: The Evolution of Barbecue

While excellent examples of Florida classics abound in Orlando, there is room at the picnic table for new interpretations when it comes to the rubbed, smoked and slathered.

Editor’s Note: Charles “Chuck” Cobb, owner of Git-N-Messy Barbecue and mentioned in this story, passed away on April 29 from injuries he sustained in a motorcycle accident. Our condolences to his family and friends; Cobb made a large impact on the Florida food scene during his short but storied career.   -B.F. 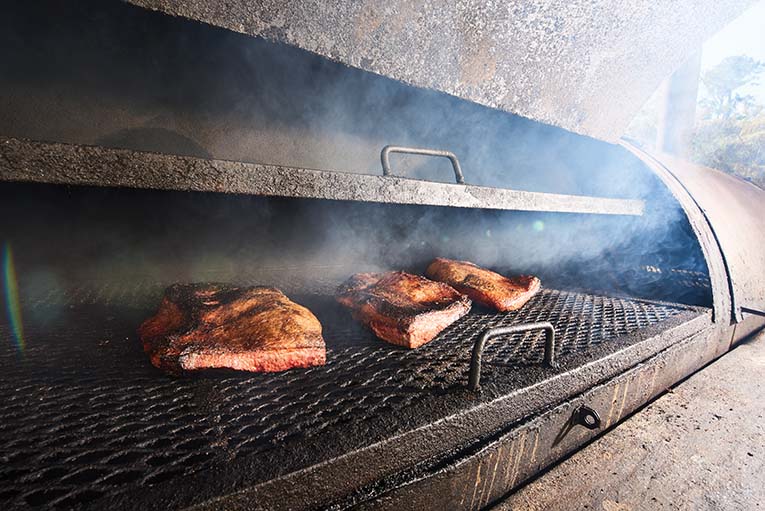 What’s in a name? A roster of classic barbecue joints in Central Florida, some long gone, reads like the cast list of a Little Rascals spinoff: Barney’s, Sonny’s, Cecil’s, Meiner’s, Keller’s, Uncle Jones, Joners, Fat Boy’s. These boys, fat and otherwise, were born in a time when you put your own moniker on your marquee. Customers greeted and thanked them in person, because they were there in person. Orlando’s younger barbecue upstarts have gotten more creative with their names and their menus, but they’re around in person, too. No matter what you call it, barbecue requires one-on-one attention.

The Taíno, the indigenous people living throughout the Caribbean, called it barbakoa. They taught the Spaniards to cook over an open flame on a raised structure made of sticks, and the Spaniards brought the technique to the rest of the New World. There aren’t open-pit restaurants in Central Florida anymore, but you will find Caribbean influences at places like old-school Oley’s Kitchen & Smokehouse in Holden Heights or Pig Floyd’s Urban Barbakoa, the welcoming neighborhood hang in the Mills 50 District.

The Spaniards also brought cattle and pigs along for the trip through the Americas. Beef and pork are still the mainstay of traditional American ‘cue, and often the first hint to a region’s particular style. Throughout the Barbecue Belt—which Florida sits below, not in—classicists tend to favor a specific protein. In the whole-hog Carolinas, chopped shoulder and pig pickins dominate. Pork ribs are the star of the show in Memphis, and in Texas cattle country it’s all about the brisket. Sauce preferences also seem to fall along state lines. The vinegar-based sauces that drench the Atlantic coast give way to mustard in the western Carolinas, while tomato and molasses find favor in Tennessee and Kansas City. Meanwhile, in Texas, a true mesquite-smoked brisket requires only salt and pepper.

It was on a trip to Texas to visit his future in-laws when John Rivers first encountered and subsequently became “infatuated” with brisket. The Jacksonville native grew up eating the kinds of barbecue that other Floridians ate: pork, chicken and smoked mullet. Brisket was an immediate draw in 2009 when Rivers lit up the “Hot Brisket Now” sign at the original 4Rivers Smokehouse in Winter Park. 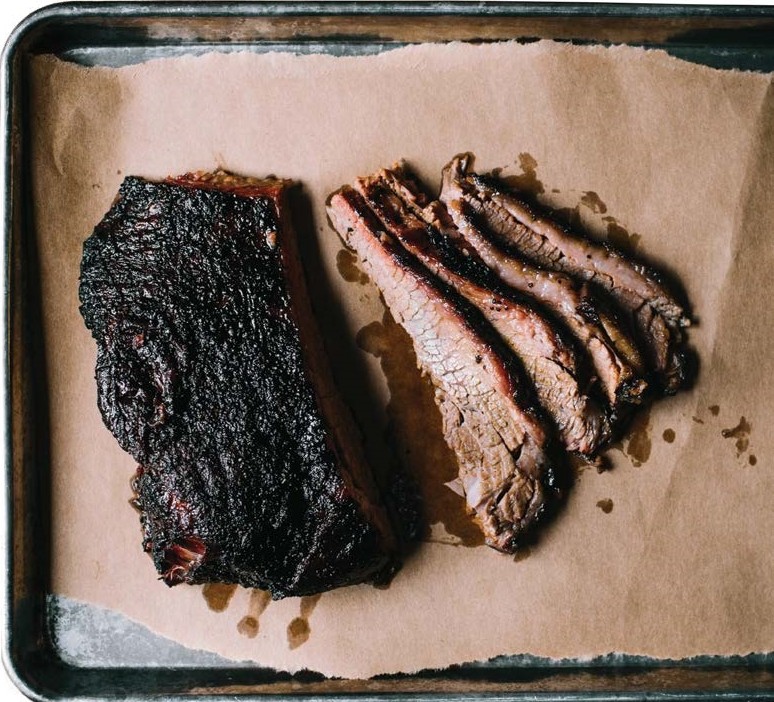 Success was not a given. According to Rivers, back in the day “you never ate beef. I think that’s one of the reasons that Floridians never took to it.” But Rivers had vision, maintaining that “my full intention was to buck every system of what was traditional Florida barbecue. First, leading with beef—everybody told me we were gonna fail.” Rivers counted on Floridians having “a good palate, especially for barbecue,” and introduced them to regional flavors such as tri-tip from California and pulled pork from Alabama along with brisket from Texas and Oklahoma.

Roughly a dozen years and locations later, that vision has both paid off and had a ripple effect. “Take a look at how many Florida restaurants now have brisket on the menu,” Rivers points out, “and frankly they’re doing it very well.”

Traditional brisket is one thing that brings customers to Git-N-Messy BBQ, but it’s pitmaster and owner Chuck Cobb’s specials that keep them coming back. Cobb attributes his take to “an evolution of menu items and recipes,” such as a one-off birria brisket ramen that his friend Quan Van once served at Kai Asian Street Fare. Van featured Cobb’s brisket in a massaman-style ramen fortified with birria broth made by Joseph Creech at Hunger Street Tacos; for his own foray into birria, Cobb used goat, the traditional mainstay of the classic Mexican stew, but smoked it before the long, slow braise.

At press time, Cobb was looking forward to offering hand-tossed flatbreads and weekend brunch. Twenty years ago, barbecue for brunch would have seemed as off-key as corn on the cob at a cotillion. But until COVID brought big parties to a halt, serving barbecue at even a schmancy wedding had become de rigueur.

Pre-pandemic, weddings were a mainstay for Swine & Sons, and Chef/Owner Rhys Gawlak was often as much a part of the show as the cake. “Everyone wanted to see the smoker and smell it when they got there. It brought an excitement to the crowd,” Gawlak says. “You’ve already got the stomachs rumbling, and as soon as the vows were over it’s like ‘yeah, let’s eat!’ ”

Since it traditionally utilizes whole animals, barbecue is often a communal event by nature. Gawlak allows that his crowd might be more “foodie-centric” than most folks, but maintains that “everybody wanted something from the wood fire, whether it was a whole pig or salt-roasted fish.”

The communal aspect, as well as the opportunity to get outside, are two elements of the barbecue culture that appeal most to Chef Albert Mann, who recently launched a whole new culinary offering: Munchie’s Live BBQ. Located on the shores of Fischer Lake in Gotha, the “immersive culinary experience” aims to lure guests out from behind their desks and into nature—even if it’s just for a couple of hours—while they enjoy nourishing food made with love and care. 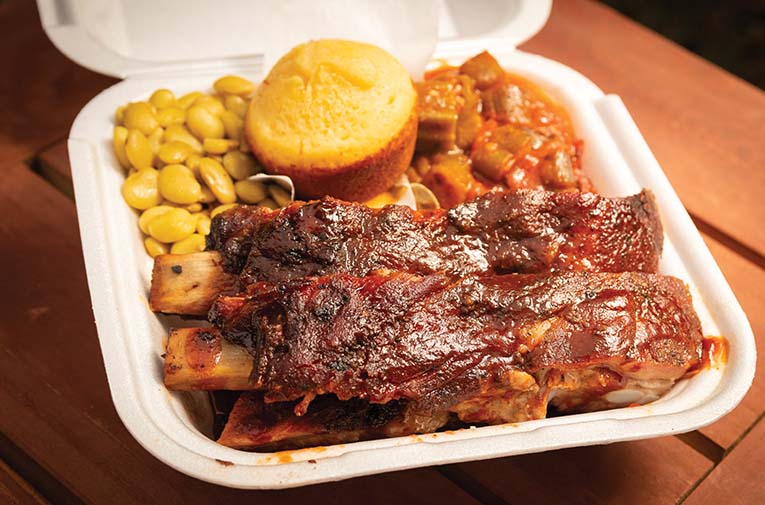 While Chef Albert mans the grill and his staff add the finishing touches to superbly executed traditional sides and refreshing drinks, guests are invited to grab a fishing pole (or bring their own), take a paddleboard for a spin, or just chill in the hammock garden. It’s a natural extension of the celebration of everyday life, according to Mann, who believes that the words of the great chef and restaurateur Charlie Trotter express it best: ” ‘After love, cuisine.’ Food is love,” he explains. “Food is connected to everything we do. Funerals, weddings. Everything is connected with food.”

Of course, contemporary ‘cue has gone beyond celebrations, observations and Sunday supper to become a weekday go-to, and with that frequency diners often want something less heavy. At The Polite Pig at Disney Springs, the farm-to-table ethos echoes that of The Ravenous Pig and Cask & Larder, its sister restaurants owned and operated by James and Julie Petrakis.

“People are a lot more health-conscious now,” says James Petrakis. “They want fresher vegetables, something a little bit lighter to cut through the smoke.” At The Polite Pig, the pick-3-sides option is as popular as most of the meatier options. Guests can also choose from smoked turkey or cedar plank salmon for dishes that are a little less decadent, but don’t skimp on flavor.

Though he grew up enjoying traditional Southern barbecue, Petrakis wanted to steer clear of it at The Polite Pig. “When we were doing research, the place that stood out to me the most was Barrel & Ashes,” which closed its doors in October of 2020 after five years in Studio City, California. “The kitchen was set up like one you would see in a fine dining restaurant, with elevated takes on the sides that everyone knows, along with a full bar.”

Petrakis attributes much of the demand for innovation to the media, noting that “as in all realms of dining, the Food Network has created the buzz” around barbecue. Before the network that birthed a billion foodies came on the scene in 1993, however, the Kansas City Barbeque Society was preaching the gospel of classic, untrendy, American-style barbecue. The nonprofit’s beginnings were as humble as barbecue itself: fewer than 30 competitors participated in three contests in 1986. Today KCBS boasts more than 20,000 members and sanctions 500 competitions worldwide, including the Sonny’s Smokin’ Showdown, which held its inaugural event in 2016 at the Central Florida Zoo. (The event moved to Camping World Stadium in 2018.)

Venue matters little; wherever a KCBS-sanctioned event takes place, the rulebook is the same. Judging is double-blind, so the official who accepts each team’s box—a 9″x 9″ styrofoam container identified only by number—changes the number before passing it to the judges. According to Emily Detwiler, the CEO of KCBS, the thousand or so volunteer judges that the organization certifies each year are “mostly lay people who love barbecue, but might be too intimidated to compete themselves.”

In a Masters Series competition like Sonny’s Smokin’ Showdown, teams must cook all four of the big meats: chicken, pork shoulder, pork ribs and brisket. In the Backyard competitions, it’s chicken or pork ribs, which are deemed as more accessible for the newbies. The Lakeland Pig Fest, which is scheduled for May 14 and 15, 2021, in Lakeland, offers competitions in both the Masters and Backyard categories, as well as a contest for kids ages 6 to 16. “The adults help light the fires, but the kids do everything else,” Detwiler explains.

It’s impossible to say whether any of these competitive kiddos will catch the barbecue bug and shape the future of Orlando’s smoked scene in a decade or two. By then, it may even be fashionable again to find a real person’s name on the sign.