What have you been smoking? Barbecue is a wacky celebration of good taste. 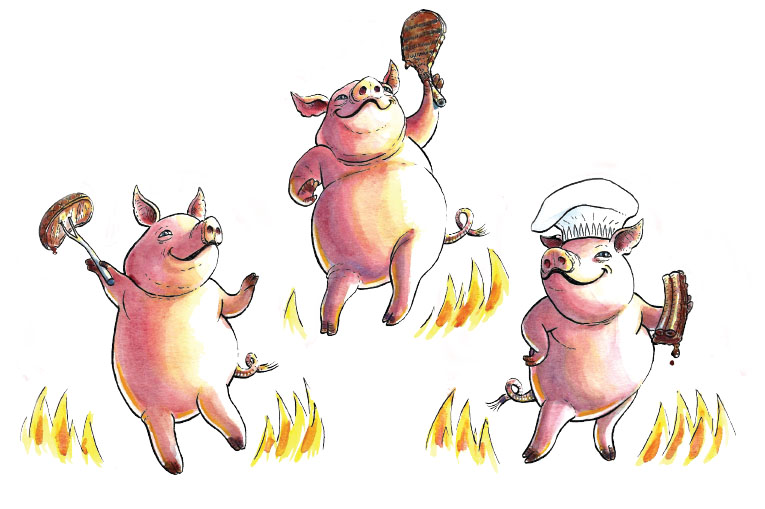 According to my baby book, which my mom gave me many years ago, my first serious attempt to say something was “gom-de-gom.” That was followed a few days later by my first actual word: “barbecue.’’

Surely I jest. But barely. As a lifelong Southerner, I have found barbecue to be happily unavoidable and wholly irresistible—a supreme delicacy that transports me to a place where pigs can fly (and be smoked nicely for a day). After decades of messy research, I have concluded that my ‘cue devotion is composed of three main elements: variety, culture and memories. Oh, yeah—smell and taste too.

I’d like to tell you that my family was full of barbecue masters who regularly created plates of goodness. Growing up, however, barbecue chicken at my house was oven-baked thighs in a Pyrex dish with a bottle of sauce emptied over them. Later, most everyone in the family tried their hand at smoking chicken or chops on a flimsy charcoal grill, achieving acceptable flavor with just a hint of lighter fluid.

So we generally left our enjoyment of barbecue to restaurants or takeout joints. My earliest recollection of the stuff was a hybrid called hash, a stew-like concoction of shredded pork served over white rice. My dad bought it by the quart in the mid-1960s at a tiny stand in Athens, Georgia. Over the decades, of course, I became addicted to the more substantial offerings of ribs, chicken and pulled pork, preferring the traditional ketchup and molasses sauce to the mustard-based version popular in my native South Carolina.

No matter the style, though, barbecue has always been an experience. There’s nothing quite like the anticipation of watching a platter filled with ribs, chicken, fries, baked beans and garlic bread brought to your table. Or the thrill of sauce dripping from a pulled pork sandwich onto your shirt as you drive with one hand and eat with the other. (Tip: Don’t ‘cue and drive.)

I love the one-of-a-kind names that celebrate the wacky joy of barbecue. Locally, we have Git-N-Messy, The Polite Pig, Bubbalou’s Bodacious Bar-B-Que, and Pig Floyd’s Urban Barbakoa, among others. And what other cuisine features logos with mascots celebrating their own demise? There are pigs with chef hats holding forks and laughing while surrounded by the fires of hell.  Are they about to cook themselves, or their friends? I don’t want to know.

Then there are the memories. A spot from college days that resembled a church social hall and offered plenty of white bread to sop up the sauce. Lunch in the 1980s at long-gone B’s Bar-B-Que off Mills Avenue. My 1-year-old son, on his first meal out, wearing a bowl of Sonny’s baked beans on his face and loving every bite. 4Rivers Smokehouse delivering free lunch to the magazine’s offices a few years ago, just because John Rivers is that kind of person.

As the late, great Anthony Bourdain once said: “Barbecue may not be the road to world peace, but it’s a start.’’ If you are not a ‘cue fan, I strongly urge you to give peace a chance.