Chef John Tesar brings his elevated steak and seafood concept to one of Central Florida's most hallowed culinary spaces.

Just over a year after Norman’s closed, The Ritz-Carlton Grande Lakes has welcomed a new restaurant to its fold. Knife & Spoon is open and is now accepting reservations. 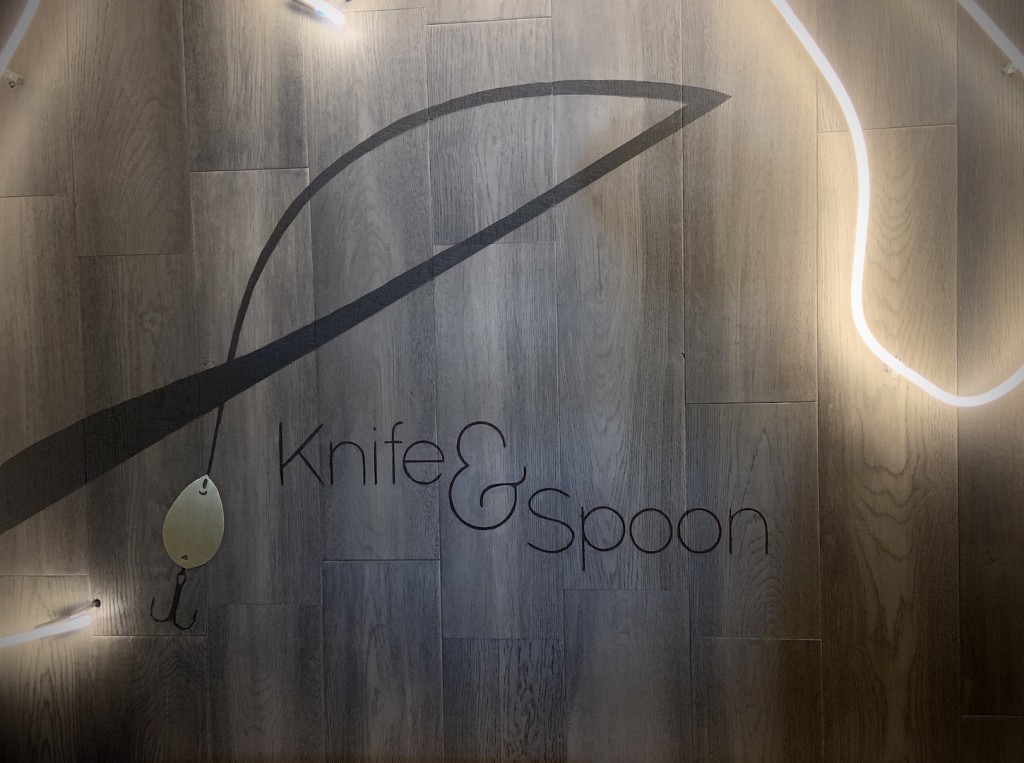 Tesar and the Curious Case of the Utensils

The new spot is the brainchild of Chef John Tesar. Celebrity chef fans may recognize Tesar’s name from any number of accolades that he’s amassed during his career, including multiple James Beard Award nominations and appearances on the television series “Top Chef.” Chef de Cuisine is Gerald Sombright, whom we’ve seen previously at The Four Seasons here in Orlando. 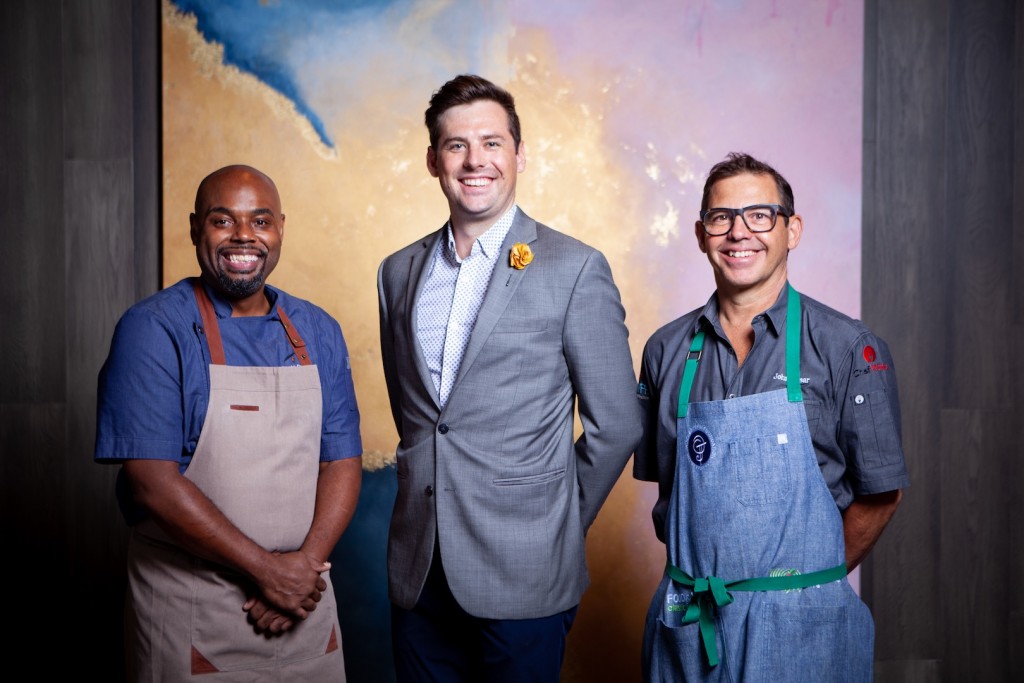 The name “Knife & Spoon,” I was told by my server, pays homage to Tesar’s other restaurants, located in the Dallas, Texas area. Spoon Bar & Kitchen, though now closed, focused on seafood in raw and lightly cooked preparations. The two locations of Knife, one in Dallas and the other in Plano, are best described as “a reinvention of steak,” using locally sourced, Texas beef and meat as well as produce. (If you’d like to learn more, be sure to check out Tesar’s conversation with Where Dallas Editor Jennifer McKee last year.)

For Orlando’s Knife & Spoon, Tesar melds the two concepts together. Team Surf offers thoughtful takes on raw, chilled, and lightly cooked fish and other seafood preparations alongside some of the dishes that he’s made famous during his television appearances. At the other end of the culinary spectrum, beef dominates the rest of the menu, with some space allotted for pasta, chicken and lamb in the middle.

We were invited for a media preview prior to the restaurant’s opening on October 7. Here are some of my first impressions of Orlando’s latest fine dining venue.

From the entrance, guests are greeted with an airy, sophisticated, modern setting. An understated sign is crowned with a modern fluorescent-style light installation, marking the waiting area outside of the restaurant. 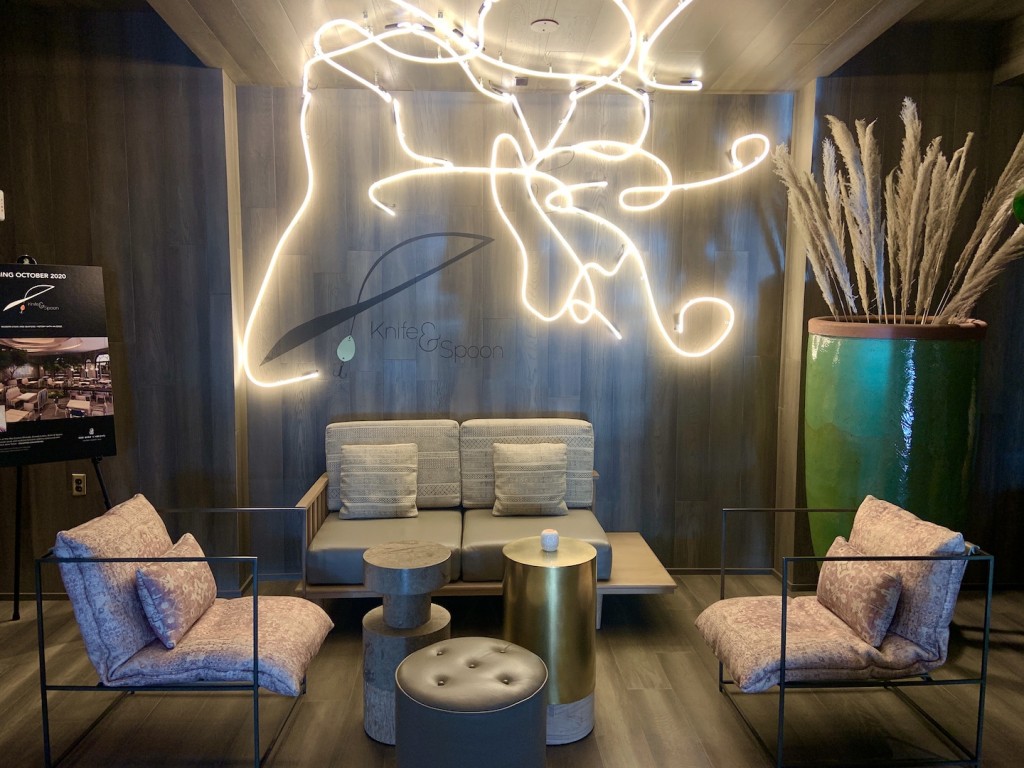 As I turned right to head into the lounge, these doors caught my eye, with their striking detail. 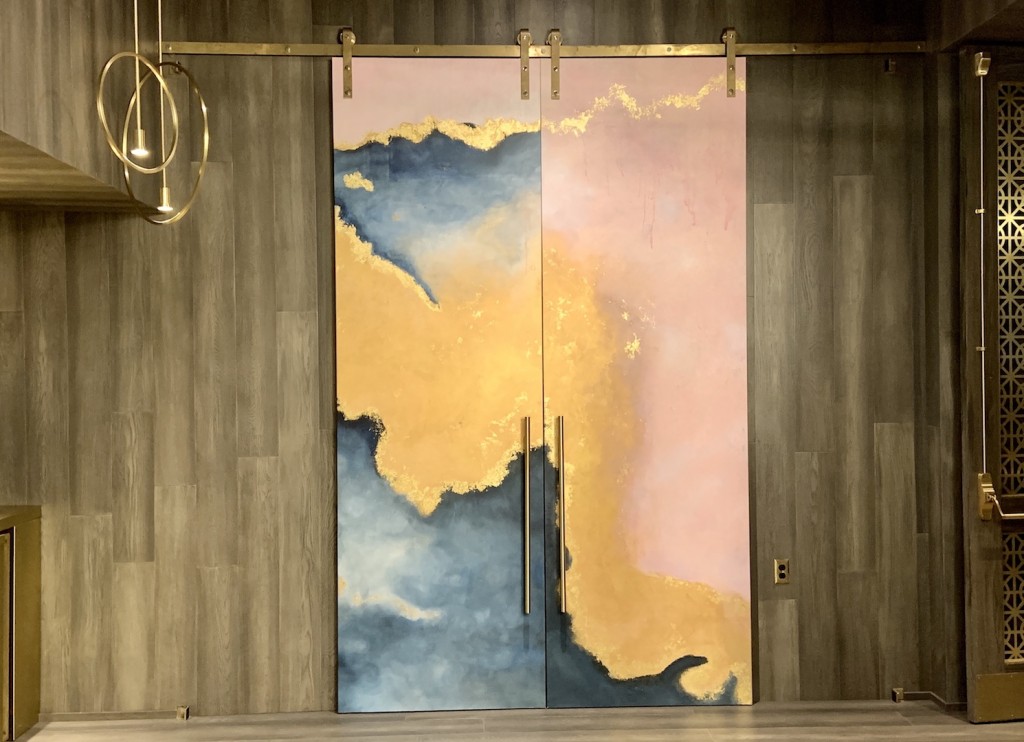 The comfortable lounge, with its low furniture, seemed like a good place to grab a drink with friends, either as a precursor to other fun, or prior to a reservation in the dining room. 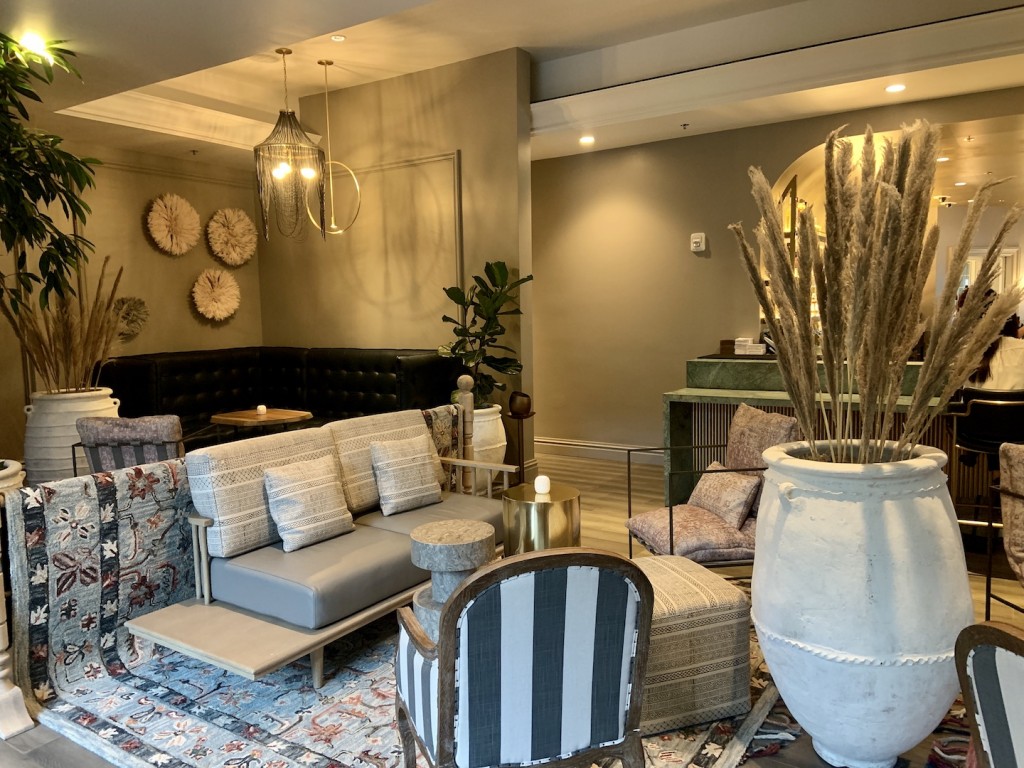 My dining companion and I were ushered through the lounge and past the bar to the hostess stand, before turning once again toward the dining room. 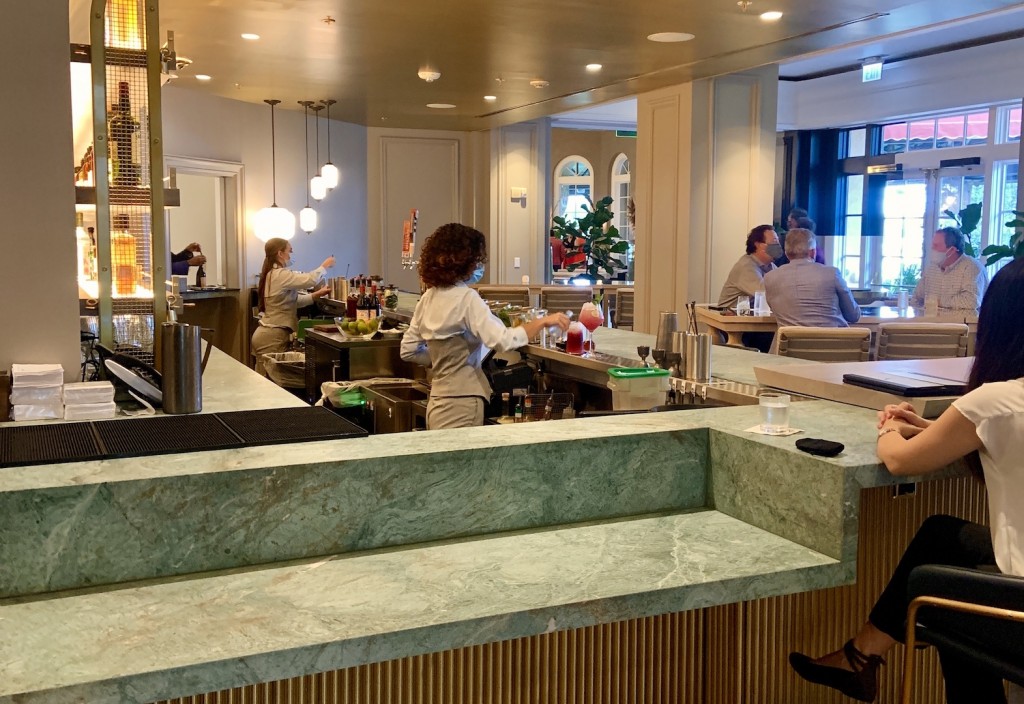 Fans of Norman’s will certainly recognize the space, and yet, everything is different. Modern furnishings in a palette of greys and blues have replaced the dark-stained wood and Mediterranean feel of the previous decor. The middle of the room that once held bottles of wine has been opened up, with a striking ceiling detail above, and what appears to be a mossy hill below. 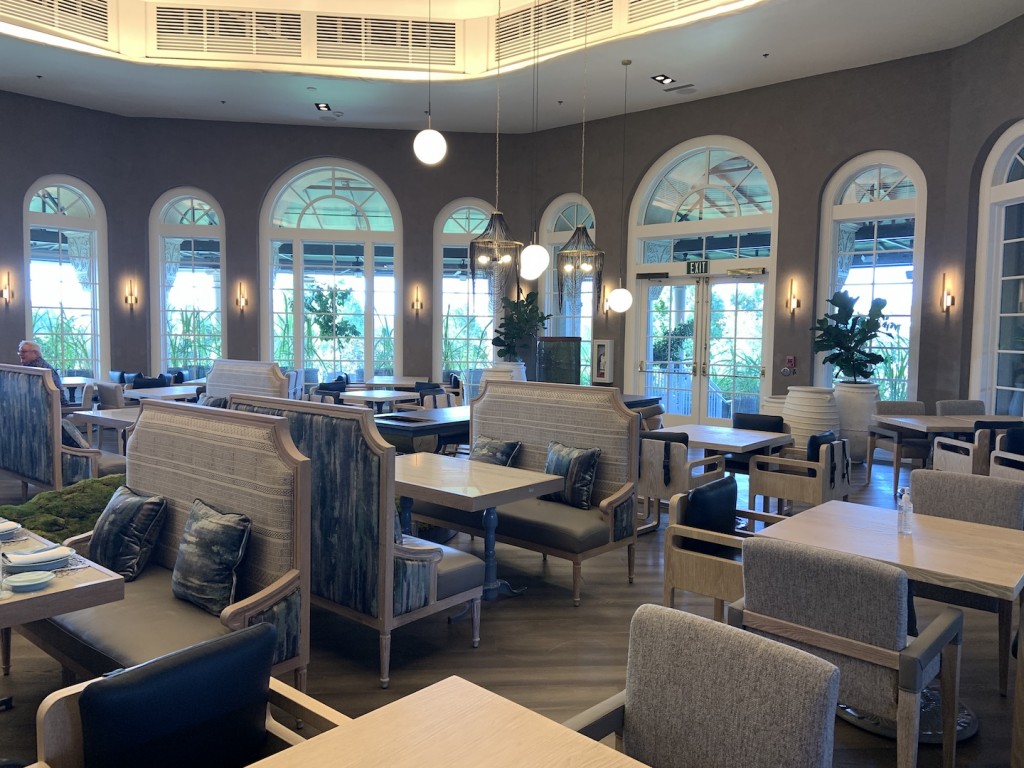 And while a tour of the space is interesting to you I’m sure, it’s the food that you’ve come for. So let’s get to it.

To begin, we couldn’t pass up one of Knife & Spoon’s specialty cocktails, and the Seared Citrus Old Fashioned ($20), with Barrel-Select 1792 Full-Proof Bourbon and Seared Orange Cordial, did not disappoint. 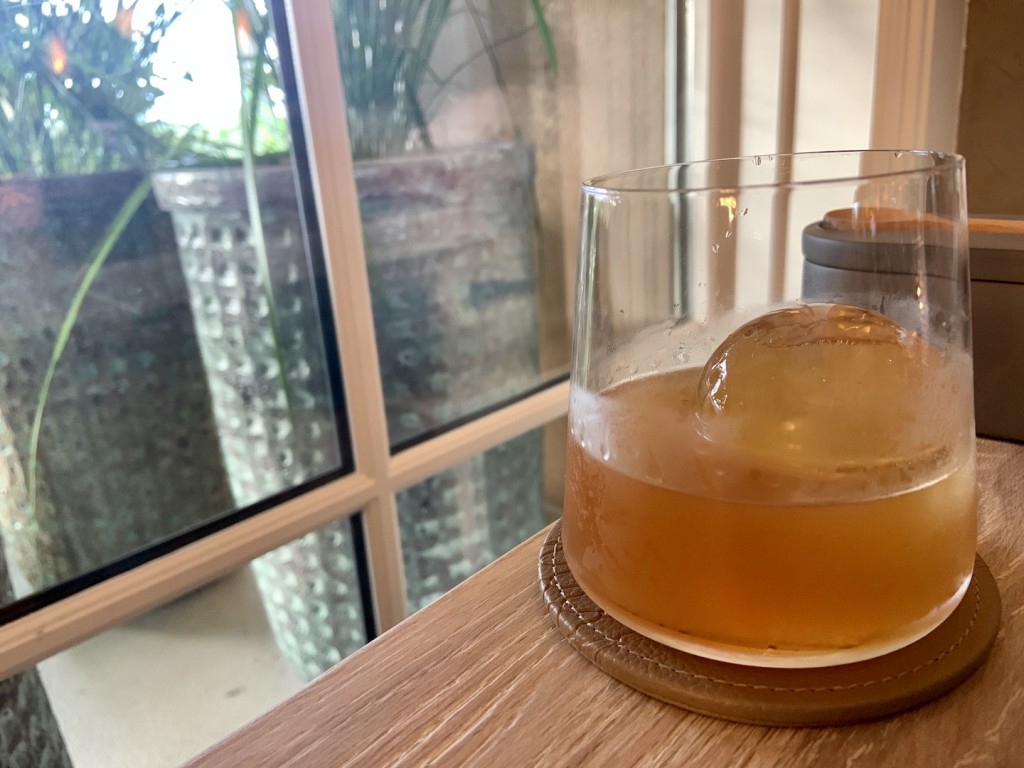 And when they say “full-proof,”—believe them. I probably should have skipped the glass of wine with dinner, or not finished this (perfectly delicious and) potent drink.

At this point, it became clear that I was in a restaurant that was a marriage of the minds: there was plenty in the mix that reminded me of other Ritz-Carlton dining occasions, from bread service and a lovely amuse bouche to mignardises at the end of the meal (photos coming of those jewel-like treats.) But I’m getting ahead of myself. I’m showing you everything, because I want you to know just how lovely the flow of this meal was.

A steward carrying a linen-lined tray filled to the brim with tasty breads offered us a selection. It wasn’t an easy choice. 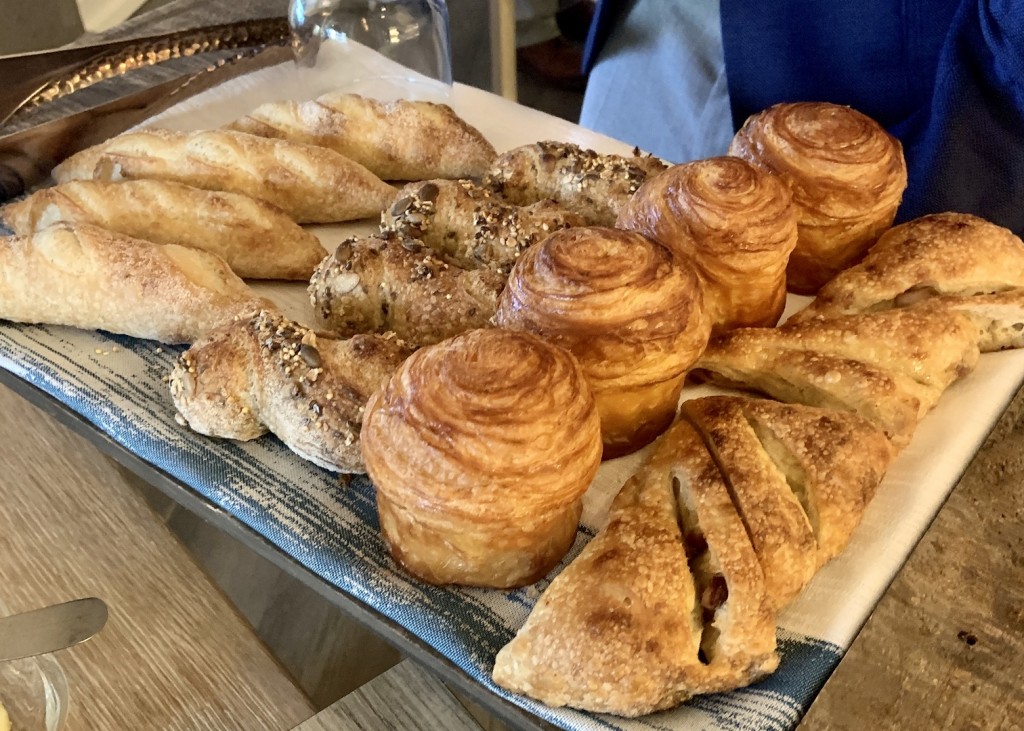 After asking detailed questions about the offerings, we made our selections. A delicate ravioli topped with roe and complemented by a sauce reminiscent of lobster bisque was the perfect two-bite beginning to our meal. 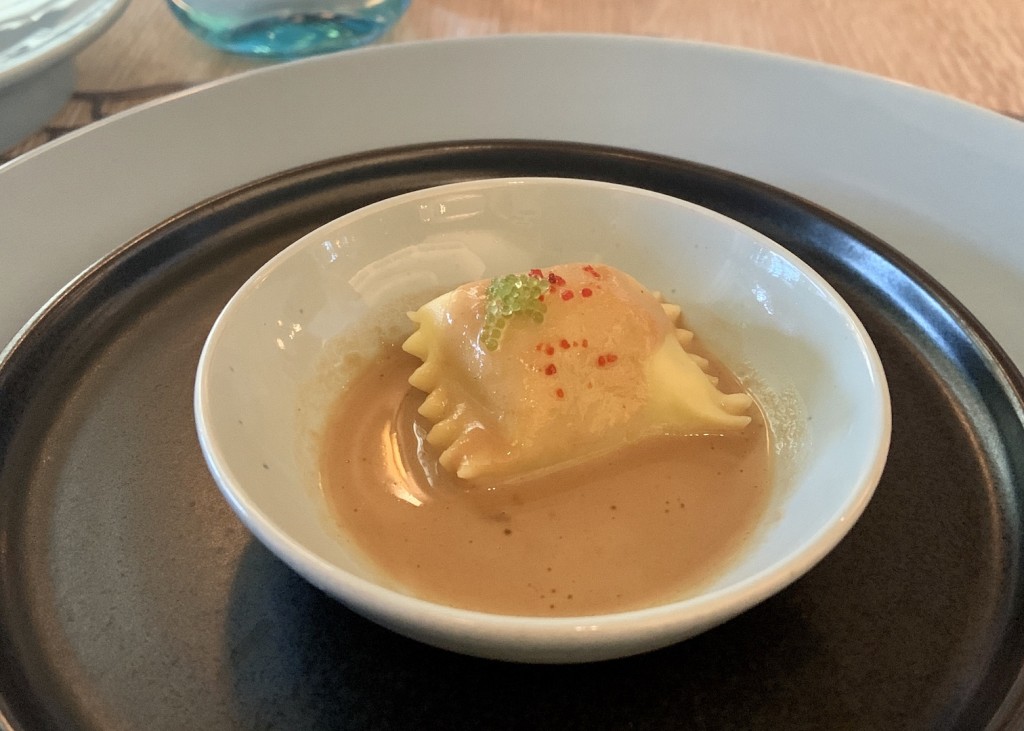 We decided to focus on the seafood offerings as our first course, and shared the Pounded Big Eye Tuna ($36). The firm piece of incredibly fresh tuna covered a hidden treasure of foie gras torchon perched atop wafer-thin toasted baguette slices.

You may not think that sushi grade tuna would pair well with foie gras. But you would be wrong. Richness from the foie gras meets the meaty texture of the tuna in calculated union,  and the crisp baguette serves as a perfect foil. I would have been happy with this as my meal. 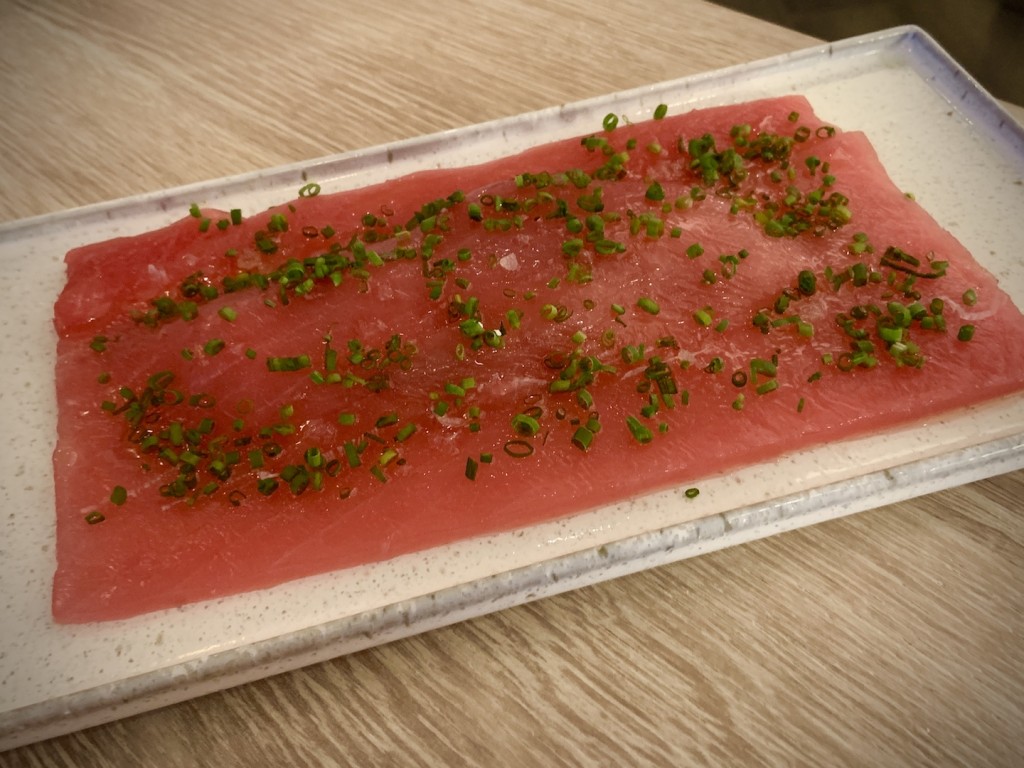 Friends who were dining nearby enjoyed the Passmore Ranch Caviar (mp), served inventively with sturgeon chicharrones. Tangy yogurt was served in place of the traditional sour cream in the dish. 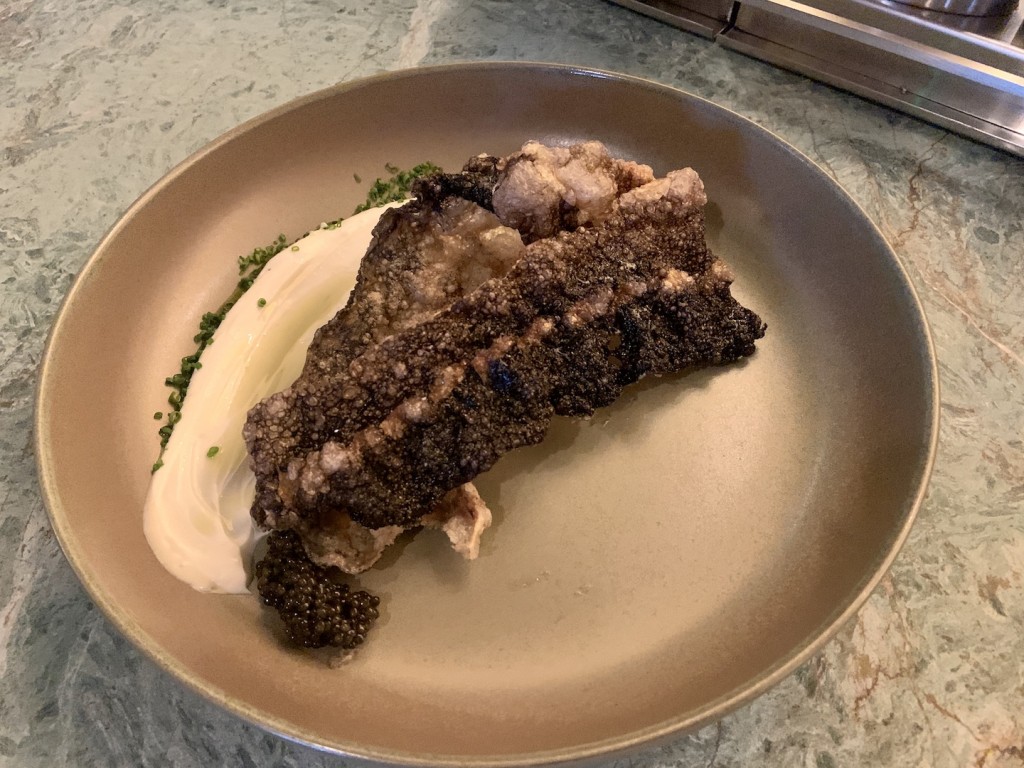 On our server’s recommendation, we began our entrees with the Deconstructed Scampi ($32), a dish re-imagined with Alaskan king crab in place of the traditional shrimp. The warm crab is served atop an herbal emulsion that was so good, we unabashedly dipped our bread into it. A garlic froth, suggestive of sea foam, finishes the dish artistically. 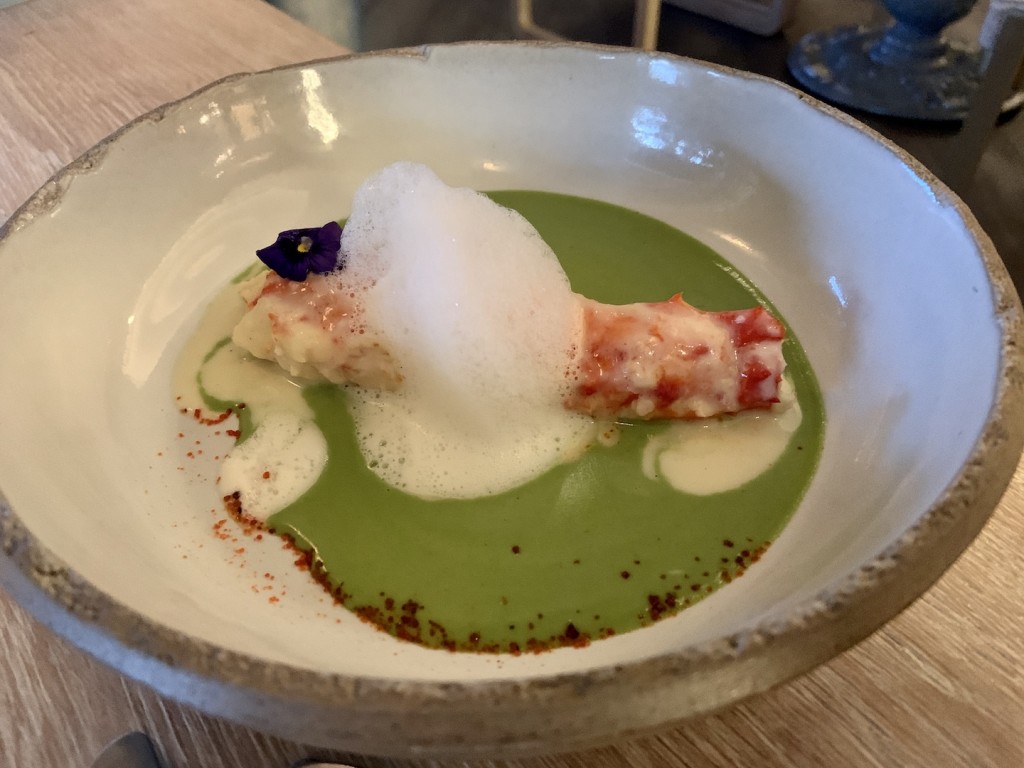 Knife and Spoon has, however, been billed as a “steakhouse concept” from the first announcement, so we felt honor-bound to try one of the steak offerings. It wasn’t a difficult choice: we went with the show-stopping, 45-Day Dry-Aged 32-ounce Bone-In Ribeye ($130). And I must say it. This is the best steak I have ever had. 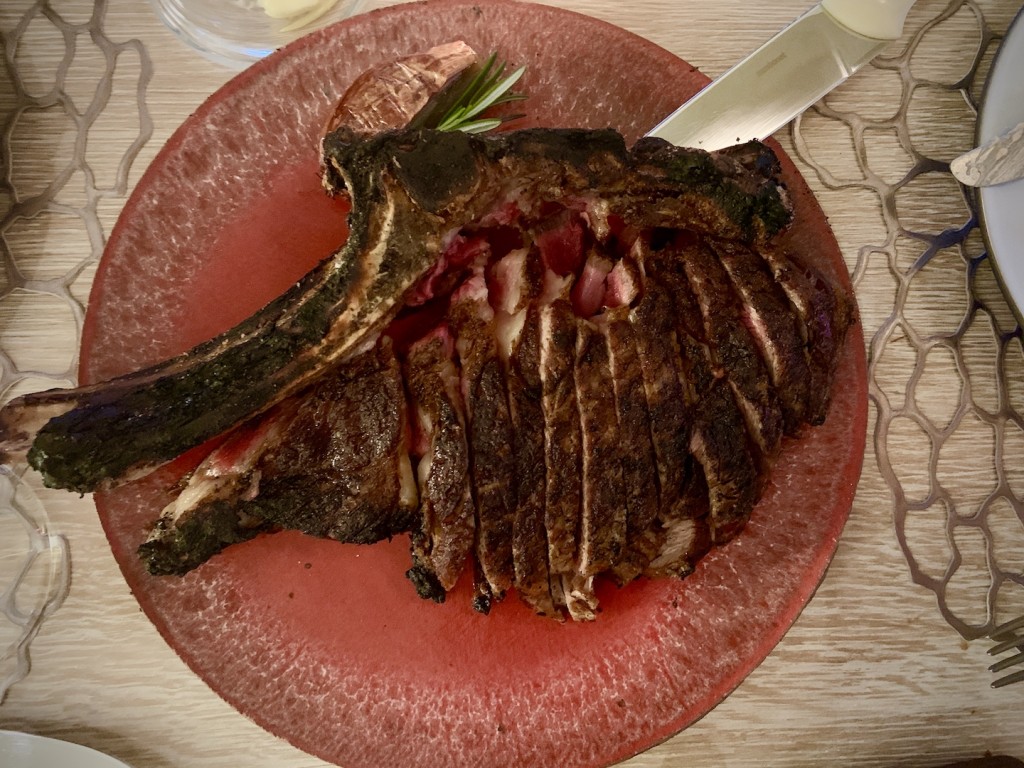 The  aging process imparts rich, buttery notes to the meat, distilling its flavors marvelously and imbuing a tenderness that I had never experienced in a ribeye. If you are a red meat lover, this will be a high point to your culinary journey. (Keep in mind that there are also 60-, 90-, 150-, and 240-day aged options, as well as non-aged beef, if you are so inclined.)

This is one hefty steak; although I split it with my dining partner, we still took home leftovers.

One more item to note about the beef: Chef Tesar sources much of his prime beef from 44 Farms in Texas, a ranch that dates back to 1909 and uses a myriad of best practices to produce some of the best beef on the market. You can read more about them on their website. (The menu also includes a few selections of Heart Brand Akaushi beef as well.)

As is traditional in many steakhouses, sides are separate and generous. We opted for the Kimchi Creamed Spinach ($17) and the Potato Puree ($15). While the potato puree was absolutely perfect, I give the edge here to the far more interesting spinach. It’s everything that you want this classic side to be, and more: subtle spice, creaminess, and a bit of a sour note to balance the flavors. I plan to beg for the recipe in the near future. 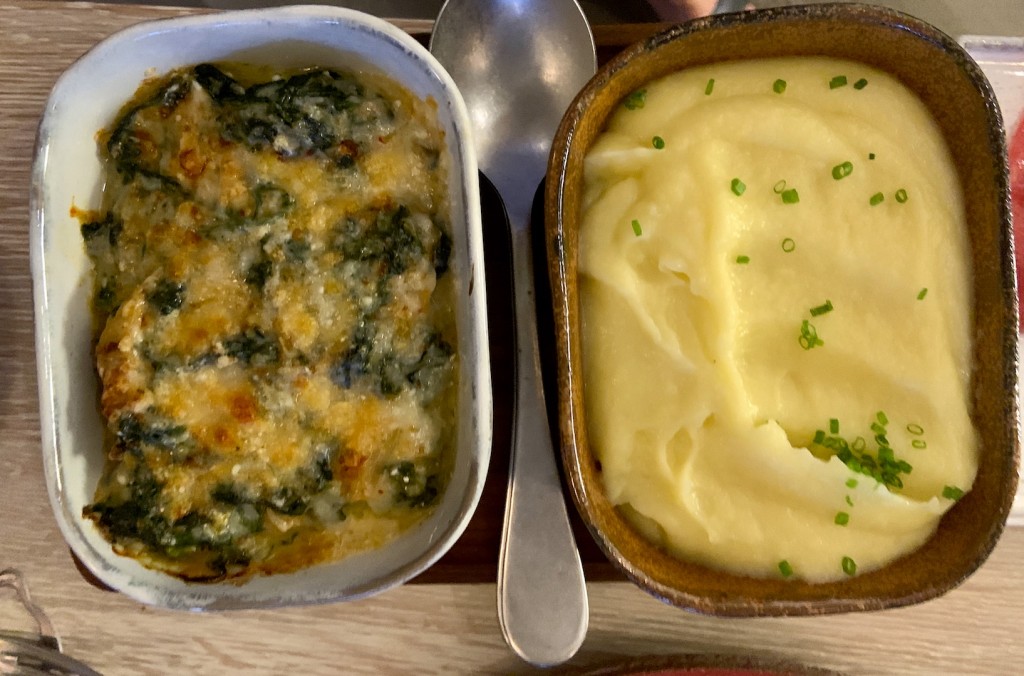 We decided to skip the Financier French Fries ($27), a move that I later regretted when I saw this plate on our friends’ table. Rather than fries, the dish is comprised of potato pave (a layered, fried potato preparation) topped with caviar, chives, truffle, and bonito. I can’t speak to the flavor, but the dish looked pretty impressive. 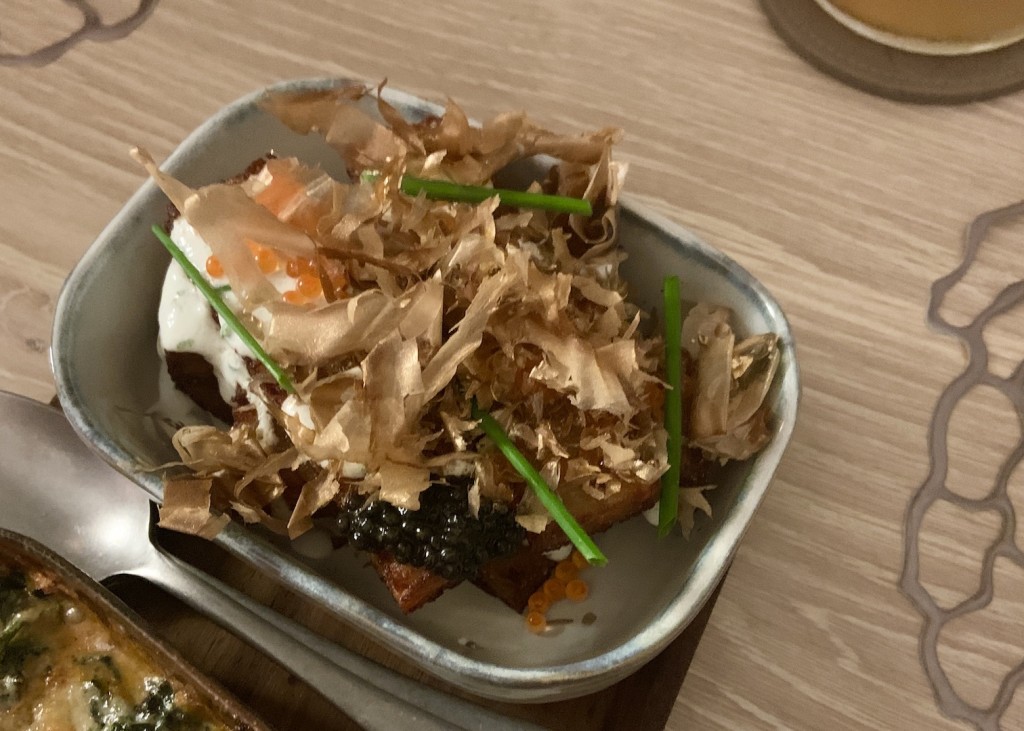 We decided we couldn’t call it a night without taking a look at the dessert menu, which is organized simply by each selection’s dominant flavor. I chose Orange ($15), a fluffy Grand Marnier souffle complemented by a puckery passion fruit sorbet. 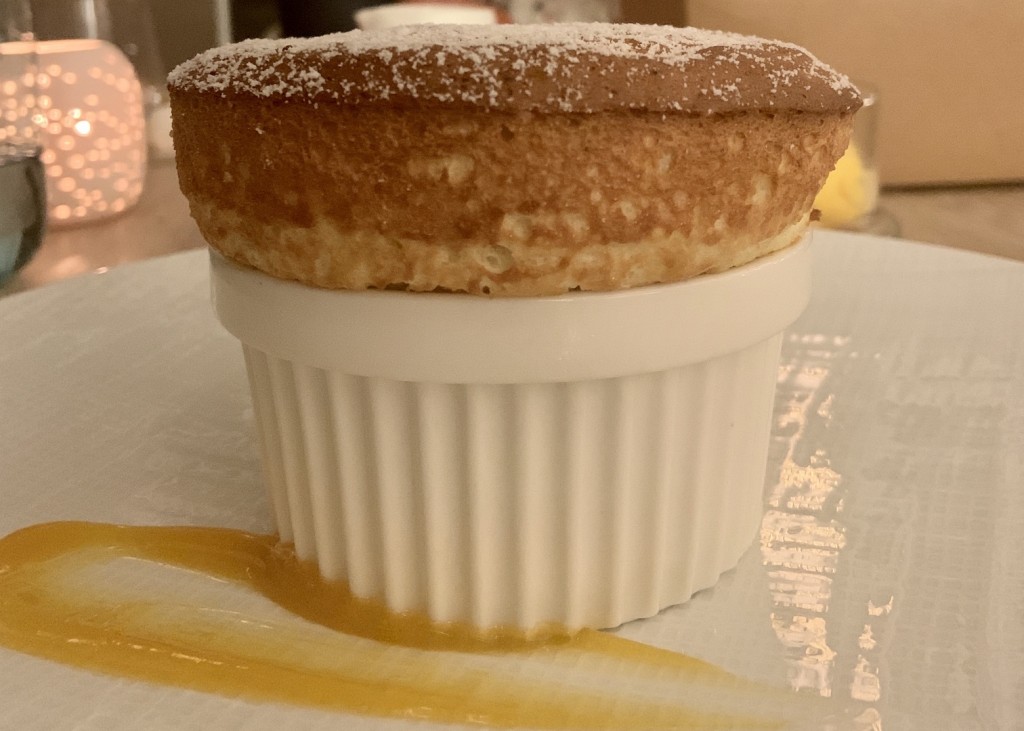 My companion opted for the Raspberry ($15). 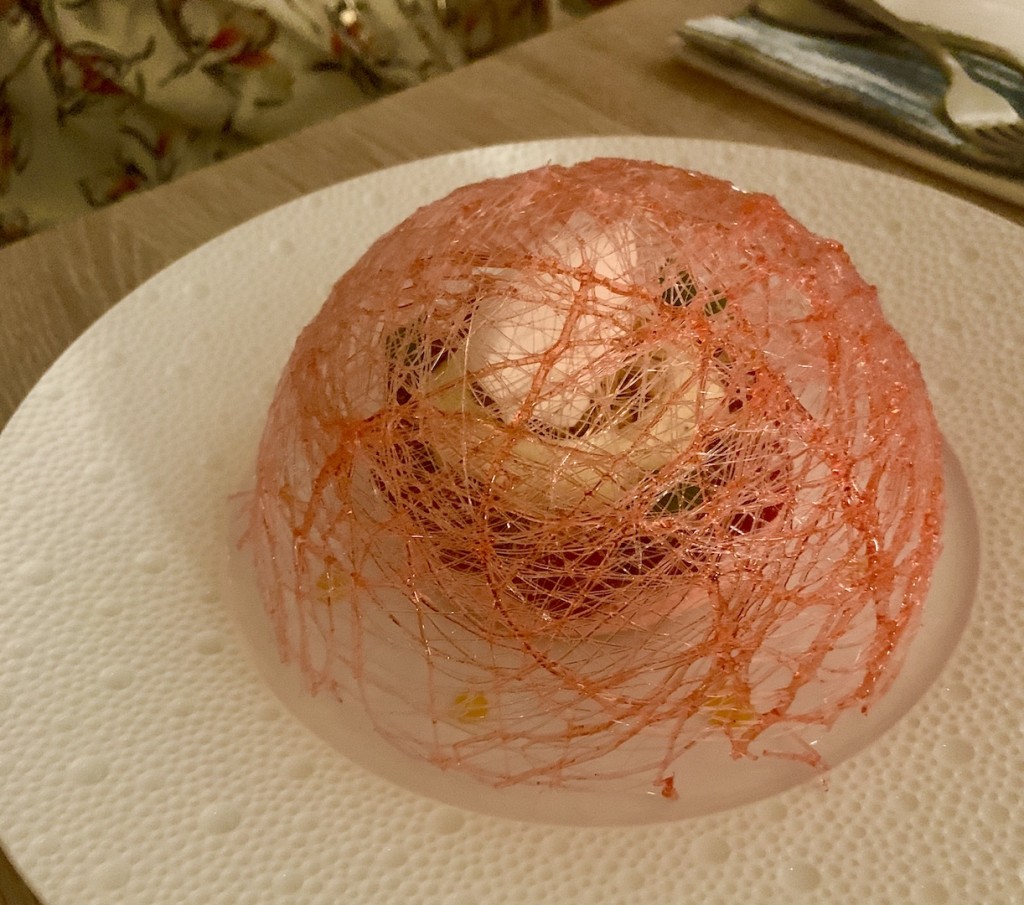 Beneath the spun sugar cage, the sweet consisted of an almond macaroon (aka a macaron) topped with diplomat cream, accompanied by yuzu sorbet. The menu terminology, while classic, proved to be just a little confusing, as my friend expected a macaroon made of coconut instead of a macaron made of almond. Still, it was a pleasant ending to the meal. 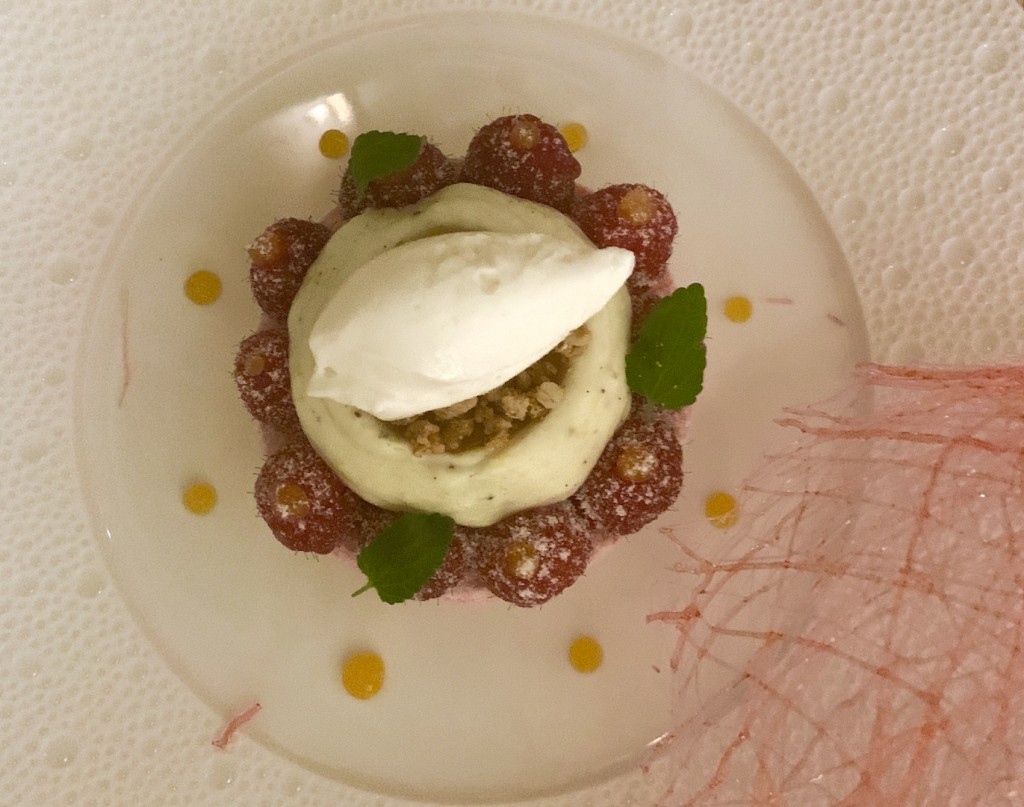 But we weren’t quite finished. Beyond our desserts, we were treated to a collection of jewel-like mignardises to accompany our rich cups of coffee. 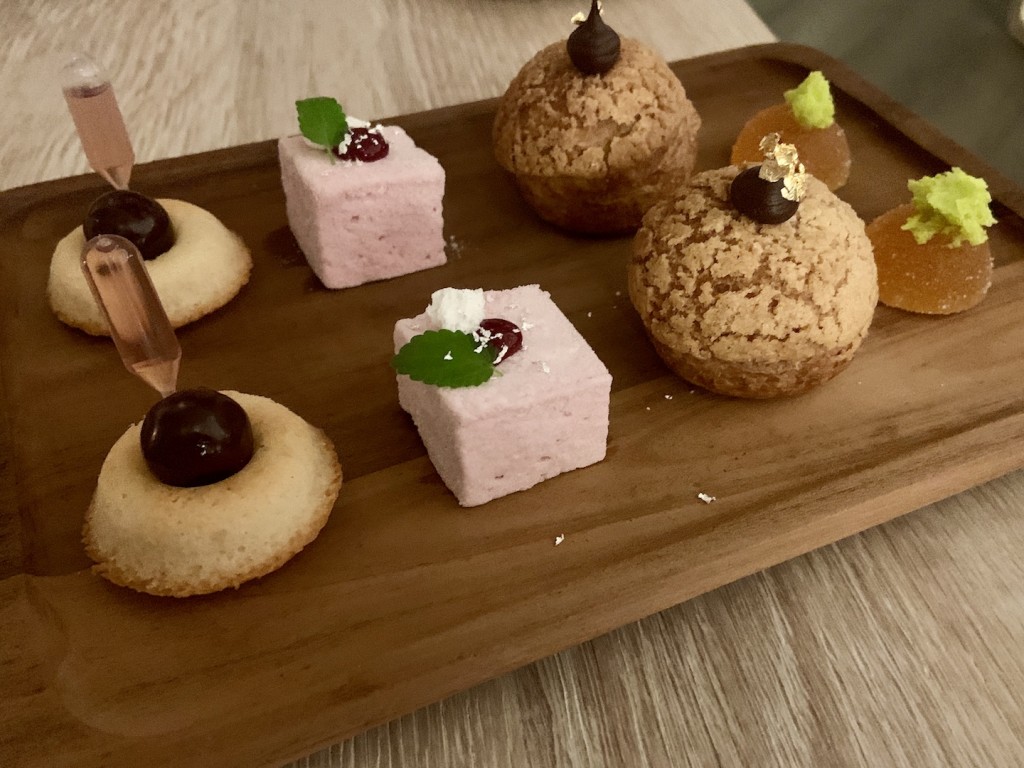 From the miniature babas to the pate de fruit, all were exquisite.

A meal at Knife & Spoon is clearly meant to be an experience. It’s perfect for the vacationing visitor, the conventioneer in town with a sizable spending account, or locals looking to celebrate a special occasion.

While the prices are hefty, the quality of service and cuisine that we enjoyed are in line with what one would expect to pay. This is especially true of the aged beef, some of which spends the better part of the year lying in wait to become your dinner, offering a truly remarkable dining experience. And with several special occasions coming up in our family, I feel certain that I’ll be returning to dine at Knife & Spoon in the very near future.

We were invited for a complimentary media dine at Knife & Spoon. Views and opinions expressed are our own.