Editor’s Note: Charles “Chuck” Cobb passed away on April 29 from injuries he sustained in a motorcycle accident. Our condolences to his family and friends; Cobb made a large impact on the Florida food scene during his short but storied career.   -B.F.

Before he turns in for the night, barbecue pitmaster Chuck Cobb sets alarms on his smartphone so he can walk outside every hour to check on his baby—a smoker in the driveway firing up brisket and ribs he will serve later that day.

If that sounds like some sort of bizarre urban legend, rest assured that Cobb’s Git-N-Messy BBQ is the real thing.  Although if the number of customers singing his praises on social media is any indication, the ’cue chef and his takeout creations have already achieved legendary status. 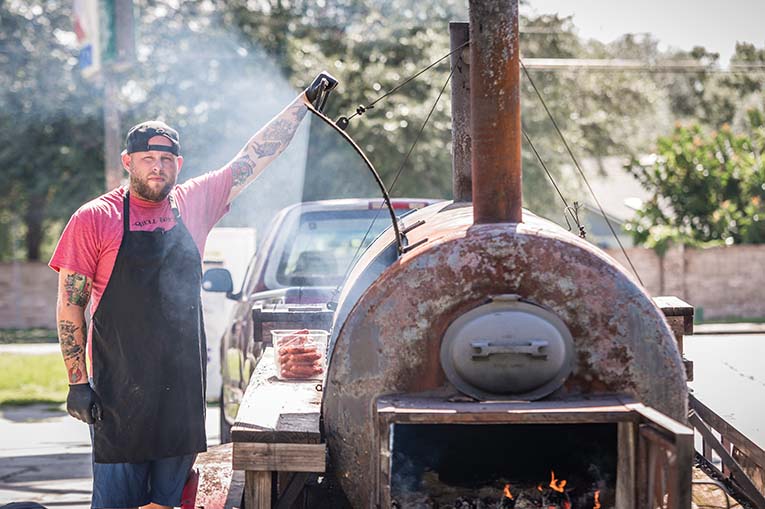 There’s his brisket, smoked for more than half a day, and the St. Louis ribs (not fall-off-the-bone, thank you), absorbing the flavor for 4½ hours. There are the sandwiches, like pulled pork, Nashville hot chicken, and chicken with Alabama white sauce. And there’s the delectable artery buster called Southern Poutine, consisting of sidewinder fries smothered with pulled pork, coleslaw, cheese sauce,  cheese curds and barbecue sauce. That landed Cobb a virtual appearance recently on Live With Kelly and Ryan.

Everything is piled into Styrofoam containers along with hearty sides like barbecue beans, collards, slaw and mac ’n cheese and offered at reasonable prices—a half-rack of ribs with two sides is $15.95, while the brisket goes for $17.99. On weekdays, Cobb is a one-man show, including cashier, chef and prepper. He has a couple of helpers on weekends.

Until recently, it all took place in a tiny corner inside the Citgo Quik Mart on Hall Road east of Winter Park. In late September, Cobb moved the operation to Red Eye Sports Tavern in Winter Springs. He’s busy with other chefs on a Halloween-themed collaboration on I-Drive during October but will still offer pulled pork and ribs at Red Eye. Next month, though, he plans to go whole hog at the new location.

Born in South Georgia and raised in North Florida, Cobb was steeped in ’cue culture early. “Every Thanksgiving instead of turkey, we did sliced pork,’’ he recalls. At his uncle’s house, “that smoker would be rolling, and around lunchtime they’d be slicing it and we’d be saucing it.’’ 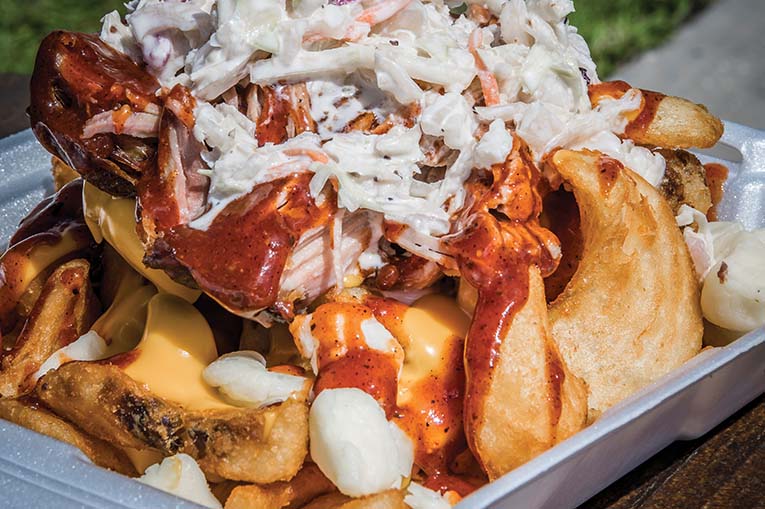 He briefly attended Orlando’s Le Cordon Bleu culinary school and was a pitmaster at various barbecue places. He tried his hand at sushi, and was chef for a time at a venture in downtown Sanford called Zoetic Sushi & Omakase. But the smoky stuff was always on his mind. He started Git-N-Messy last year and set up shop in a Sanford gas station/market. When that store closed because of financial troubles, Cobb found the Hall Road location and had been there since January before the move to Red Eye.

He has an enthusiastic fan base and it’s easy to see why: Cobb posts constantly to his Facebook page about specials (prime rib is an occasional item), out-of-the-ordinary creations (from smoked goat to a fried green tomato sandwich), collaborations with other chefs, his 20-hour days, even admitting he fell asleep and burned the brisket.  And then there’s the dreaded “Sold Out’’ notice (he doesn’t believe in keeping leftovers).

“I believe transparency is the key to success,’’ the chef says. “You have to let your customers know what’s going on.’’

The other key: His barbecue is just darn good. Cobb uses a mixture of oak, cherry and hickory wood in his smoker. He experiments with the dry rubs that flavor the meat—butter pecan coffee was a recent one. At the end of the workday, the smoker is loaded with a fresh batch of brisket, ribs and pork butt and comes home with him, pulled behind his truck. And in his driveway, the fire magic begins.

“I try to keep that temperature at 200 or 225. I don’t want it to be too hot because I don’t want to overcook the meat,’’ Cobb says. “That takes a lot of thinking about ‘How many logs do I throw on to keep it at 225 degrees for three hours?’ ” Then he adds with a laugh: “I lie in bed worrying about it!’’

Barbecue Nation thanks you.

This article appears in the October 2020 issue of Orlando Magazine.
Categories: Food & Drink
Tags: bbq, food and drink, Git-N-Messy
Want to read the whole issue? Download and read this issue and others on Magzter.