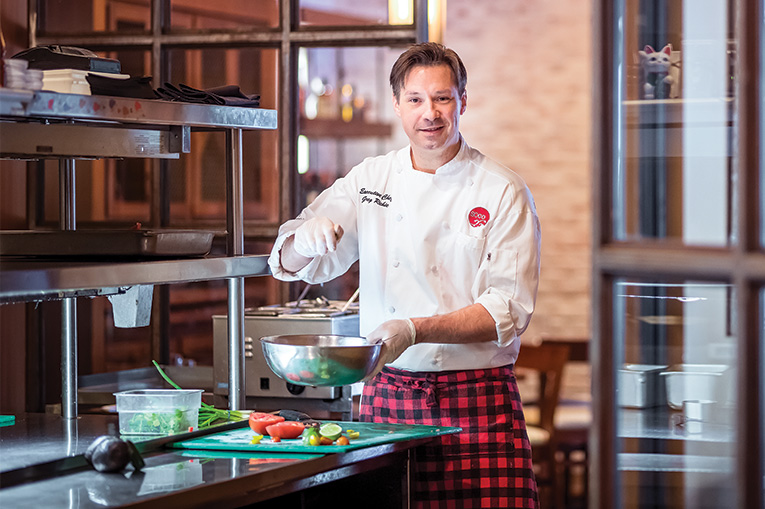 The term "Southern Contemporary" may sound like a Grammy Award category, but it is in fact the guiding force behind Greg Richie’s Thornton Park landmark restaurant, Soco. Executive Chef/Partner Richie presents a Southern focus on a world of dishes: hummus made from boiled peanuts; ravioli filled with black-eyed peas; crispy Korean-style fried Lake Meadow chicken. And some of the best biscuits in town.

Moving from Hawaii in 2000, Richie opened the Orlando location of Roy’s and then ran the kitchen at Emeril’s Tchoup Chop. But even back then, he had the Soco concept in mind. It almost opened in Ocoee, and then again at the former Harvey’s in the Bank of America building downtown. Eventually, Thornton Park became the perfect location. Richie also took over the nearby Cityfish kitchen, which became his Asian fusion experiment, Baoery. Now his focus is purely on Soco.

“This place is exactly what I always thought it would be,” he says. “The food has changed a little bit, the uniforms are different, but we’re not faking it in the kitchen. We make our own butter for goodness sake. We’re not bs’ing.”

Richie is a casual guy, formed by his Texan family, Georgian childhood and stints in Hawaii and South Carolina. But his professional attitude is laser sharp.

“I look at everything here–does the room look good, is the music too loud or too soft? I walk through here some days and I get the biggest smile on my face. When I see happy people enjoying great drinks, I walk by and the music kicks ass and I see the bartender, he’s shaking that drink really nice…I just smile. This is great. I’m happy.” * Central Boulevard at Summerlin Avenue, Thornton Park, socothorntonpark.com —J.H. 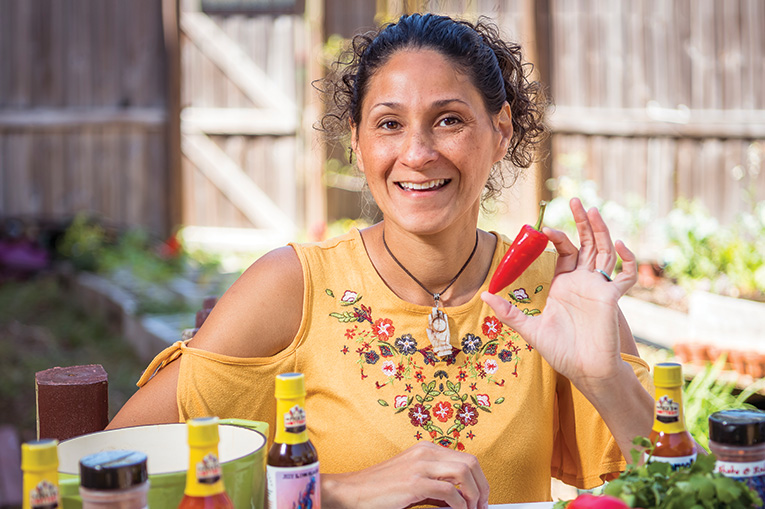 Wendy Davis, hot sauce entrepreneur, creator of the annual Sauce Cook-Off food and music event and the Hot Saucy video cooking series, may be the perfect ambassador for Orlando. As owner of Poca’s Hottest, she has created 21 locally grown and bottled products that spotlight Orlando musicians such as Gargamel! (hot aged habanero), Kaleigh Baker (ghost pepper whiskey) and Shak Nasti (Cajun honey mustard). A vocation that began as a whim now draws attention to Central Florida in more than 300 stores and restaurants, including Winn-Dixie and Lucky’s Markets, and on Amazon.com

“I didn’t even like hot sauce,” Davis says. “I started 12 years ago—an overnight success. I had a ton of peppers." Bobby Koelble, her partner of 21 years, “was addicted to Sriracha sauce, and I needed to do something with the peppers.

"I was one of those music festival hippies; I figured if I put a label on this bottle with band information [guitarist Koelble was in the popular Junkie Rush], then I could go out and promote the band and sell the sauce, make a little extra gas money to stay on the road.” It was cross-promotional merchandising by accident. “I couldn’t just make a T-shirt; I’m a chef!”

Davis had been cooking for her family since she was seven. “My mom worked full time, so I was in charge of the house. My grandmother was a really good cook, but she wouldn’t allow kids into the kitchen, so I would sit on the back of the rocking chair and watch, and go home and try to copy it. Later, she told my mom, ‘If I would have known she was going to grow up to be a chef, I would have let her in the kitchen.’ ”

In 2000, Davis went to school at Southeastern Culinary in Kissimmee (“culinary and car repair,” she laughs). She’s worked at The Globe, Trastevere, Buca di Beppo, “gathering info, sucking it all in.” She even cooked at Rachel’s Men’s Club. (“From what I was told, the first woman ever allowed in the kitchen … well, first clothed one anyway. But the food was really good.”)

She has new spicy ventures; a starring role in the documentary The Executive Empress, which features Florida women entrepreneurs; and a remarkable daughter, Coral Sue (“my Sue chef!”). Orlando is fortunate to have Davis as an advocate.  *pocashottest.com —J.H. 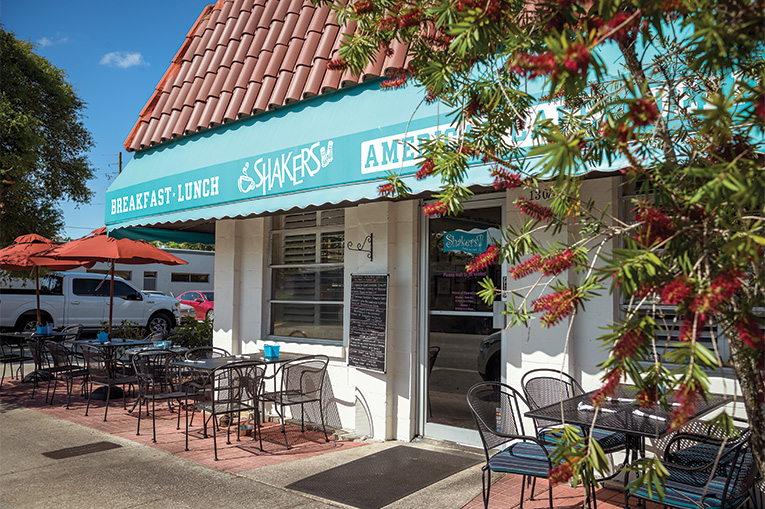 A pinch of creativity, a big dash of goodness.

For a 50-seat restaurant that is only open until 2:30 p.m. (2 on Sundays), Shakers has the clientele and reputation of a much larger restaurant serving dinner.

“We serve over 300 people on weekends,” says Greg Granda, who, with wife Terry purchased the venerable College Park eatery in 2014. “It’s mind-boggling. We stay full for four to five hours straight.”

A graduate of the Culinary Institute of America, Granda worked for 25 years in kitchens and restaurant management. After leaving the business for a decade at FedEx, he yearned to cook again. Shakers was actually Granda’s model of the kind of place he wanted to own, even specifying the name to his realtor. Two years into the search, he got the call: Shakers was for sale. It became available on a Thursday, and by Saturday there was a contract. “Sometimes when you ask for things,” Granda says, “you’ve got to be prepared.”

Opened in 1993 by Ben Borsellino and David Ross, later owned by Keiko and Mitsuhiko Yoshida and then, since 1997, Sunny Nelson, Shakers has always featured an ever-growing novelty salt and pepper shaker collection on walls, shelves and tables. “I put up more shelves,” Granda says. “Every now and then I’ll get a UPS box from some little city and it’ll have seven sets of shakers. We can’t sell them because they’re all donated.”

After almost four years, Granda says he couldn’t be happier.

“When we first bought the restaurant, people were saying, don’t change it, we love it just the way it is. I bought the restaurant because I was a customer too,” Granda says. “I decided to leave the menu alone. The basic breakfasts are still there, people still insist on Folger’s coffee.’’

He points to the giant chalkboard, where a chorizo and goat cheese omelet, beef short rib hash and cinnamon roll pancakes vie for attention against the standard two eggs and sausage.

“Those are four years of trial and error,” he says. “The ones that worked stayed on the board. And 30 percent of my orders come from the board. It’s not because we have the best bacon and hash browns; it’s because we experiment with menu items.”

Granda doesn’t see an expansion to evening hours in his future.

“I bought this place because I didn’t want to work nights.”  * Edgewater Drive between Maxwell and Golfview streets, College Park, shakerscafe.com —J.H. 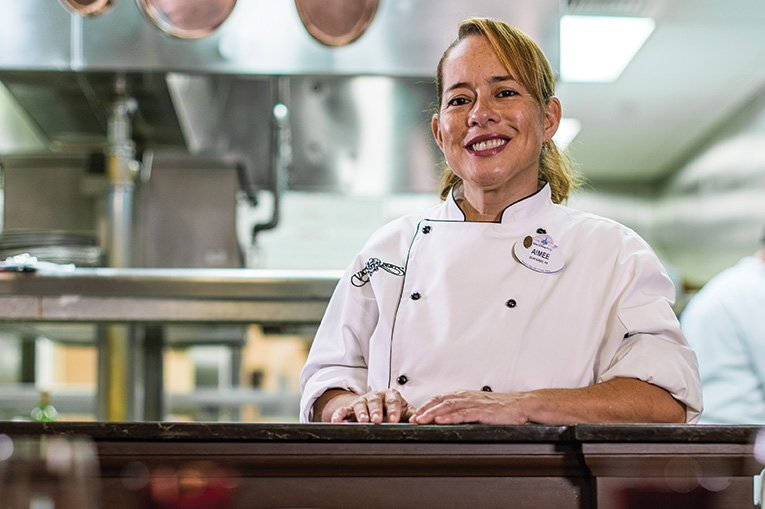 A commanding presence with a magical menu.

Atop Disney World’s Grand Floridian Resort sits the most celebrated restaurant in Orlando.

Helmed for 22 years by Chef Scott Hunnel (a member of our first Hall of Fame in 2003), Victoria & Albert’s has garnered eight James Beard Award nominations for Best Chef, 18 consecutive AAA Five Diamond awards, a 2018 Forbes Travel Guide Five-Star Award, a staggering 50 Orlando magazine Dining Awards, and enough Zagat, Wine Spectator and local accolades to fill a book (or two). In its three spaces—dining room, eight-seat Queen Victoria’s Room, and the in-kitchen chef’s table—are served up to 21 courses of highly curated and flawless food, sourced (sometimes exclusively) from around the world.

Hunnel took on the role of executive chef for the entire Grand Floridian Resort last year, overseeing operations at all 11 of its food outlets. But he says he schedules his own shift in one of the kitchens “at least twice a week. I need to keep my hand in.” Commanding the V&A kitchen now is Chef de Cuisine Aimée Rivera, who has worked at the famed restaurant since 2002.

“I’ve been here long enough to know how this kitchen runs,” Rivera says. Much of the chef staff have worked at V&A for many years, some for decades, and they understand the core of the cuisine, what Rivera calls “the Real Food.” The market-fresh menus may include Australian Kobe beef, Scottish langoustine and Alaskan sable, coupled with Rivera’s love of bold flavors.

She also understands the mission. “We come in every day, as if we’re trying to earn our first award. The job is the priority.”  *Disney’s Grand Floridian Resort & Spa, victoria-alberts.com —J.H.