When the former Flying Fish Café came out of its extensive redo two years ago, diners were impressed with the rich gold and blue décor, the superlative Chef’s Counter in front of the kitchen, and mostly the continued commitment to highest quality seafood carried on by Executive Chef Tim Majoras. “I take the sustainability situation seriously,” Majoras says. He shows a respect for seafood that is, as he says, “harvested directly from the waters of the world.” It shows in elegant dishes like Florida coast pumpkin swordfish, Hawaiian kanpachi, and Hokkaido scallops with Key West pink shrimp. That such a high level of craft lives in a fun environment is the added bonus. * Disney’s BoardWalk, disneyworld.disney.go.com/dining/boardwalk/flying-fish —J.H. 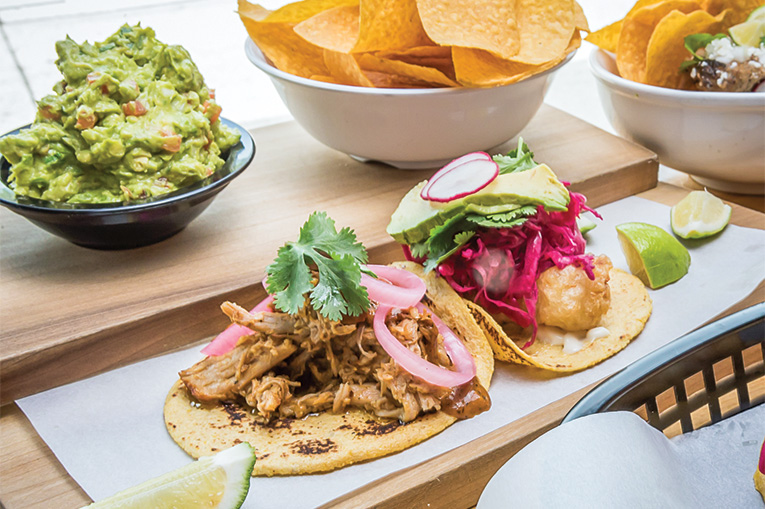 The current craze for tacos can be looked at in several ways: hip, ubiquitous serving vehicle for all manner of food (look Ma, no plates!); hot but slightly overused trend; or respectful traditional cuisine. Take the third, add outstanding combinations of flavors and ingredients like smoked kale and mushrooms, slow-cooked beef shoulder and made-to-order guacamole, and you have Black Rooster. John Calloway, my Best Chef pick last year, hasn’t dropped a note in his quest for taco excellence in this tiny Mills Avenue space. “Since the beginning,” Calloway says, “we have strived to provide a delicious quality product quickly and efficiently with exceptional service in a cool environment. This has always been our mission.” * Mills 50 District, blackroostertaqueria.com —J.H. 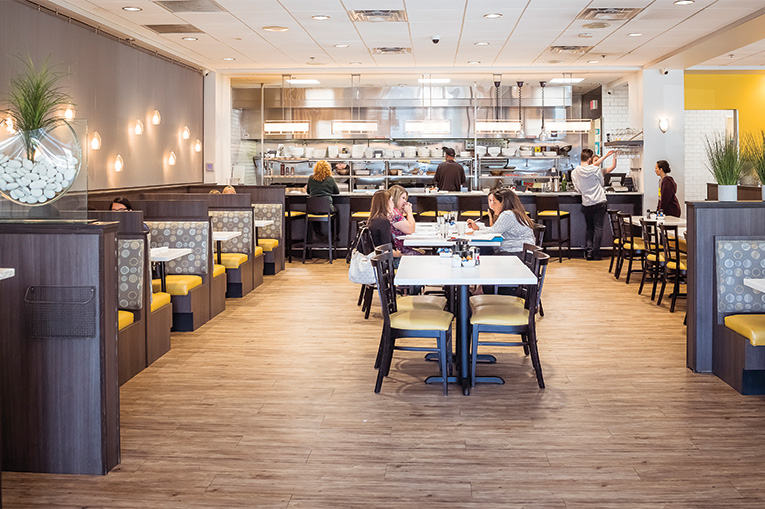 Overstuffed build-your-own omelets, a pancake bar, breakfast bread bowls (why hasn’t someone done this before?) and a three-way chicken and waffles “flight” make for appealing morning offerings. Omelet Bar opened in January 2017, a sort of “proof of concept” of a proposed five-location chain and the brainchild of Tarek Kanso, a UCF business school graduate. The food is good enough to be the Millennials’ First Watch. Only open until 2:30, the UCF-area eatery still manages to offer unlimited mimosas to go with that Lobster Benedict for Sunday brunch. * At Alafaya Trail and University Boulevard, omeletbar.com —J.H. 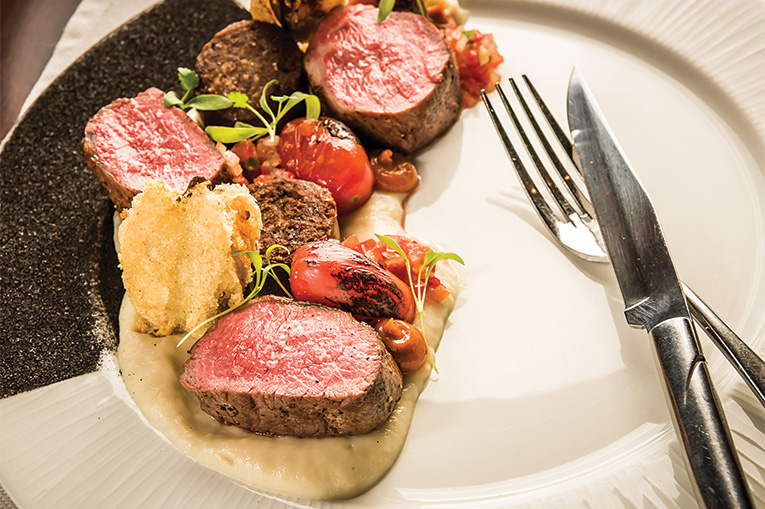 If we expand the “theme park” definition to include “area,” then there are a bunch of contenders—Flying Fish, Strong Water Tavern, Maria & Enzo’s, Bull & Bear—but for on-property goodness I’m sticking with Tiffins. The 252-seat, remarkably constructed restaurant is unlike any other Disney experience, absorbing the worldliness of Animal Kingdom’s districts and rendering intricately crafted meals. Chef de Cuisine David Njoroge has moved from Jiko and Sanaa restaurants at Animal Kingdom Lodge to a place filled with art, both on the walls and plates, with dishes like Ethiopian coffee-infused venison and berbere-spiced lamb. * disneyworld.disney.go.com/dining/animal-kingdom/tiffins —J.H.

Domu is a modern take on a very traditional ramen bar, and I am heartily disappointed when I can’t get in. And with a 90-minute wait most nights, one can’t get in a lot. But Domu is worth the wait, with Chef/Owner Sonny Nguyen’s sterling assortment of pork, chicken and vegetable broth ramen with house-made noodles (and no-broth mazemen and chukka), stupendous crispy wings in kimchi butter (trust me, order them) and a grilled octopus dish that might be the best-tasting bargain in town. * East End Market, Audubon Park, domufl.com —J.H.

What could anyone want from a late-night spot except crafty sophisticated drinking and a bit of a bite? The short evening snack menu includes roasted fava beans, house-cured olives and a Mediterranean-influenced Brie, prosciutto and fig jam sandwich, but the atmosphere is exquisitely parlor-loft casual and the bar stays open until 2 a.m. Just far enough away from the less appealing aspects of Orange Avenue after midnight, Mathers manages an air of coolness without making you feel underdressed. * South Magnolia Avenue, across from Gallery at Avalon Island, downtown Orlando, mathersorlando.com —J.H.

With its sleek modern interior and cutting-edge fusion cookery, it’s hard to believe that Seito in Baldwin Park is 13 years old. But emerging through owner Jason Chin’s growing pains while updating the menu in 2015 is a mature, energetic and thoroughly enjoyable restaurant that just plain serves great food, regardless of the cuisine. Executive Chef Huy Tin has been in Chin’s kitchens since 2010, and brings his experience in Japanese and Chinese cooking (his father owned a Chinese restaurant in Orlando) to a menu that ranges from scratch ramen and celebrated sushi to Korean bi bim bap and a sophisticated take on the food court staple, pepper steak. “We’re extraordinarily lucky to have him,” Chin says of the chef. * New Broad Street, Baldwin Park, seitosushi.com —J.H.

Owner/Chef Chelsie Savage refers to her restaurant as “plant based” and “healthy” before the word “vegetarian” is mentioned. In truth, most of her clientele at Sanctum is “beyond the vegan and vegetarian crowd,” she says. Sourcing locally and organically whenever possible, the recently expanded neighborhood favorite is now offering dinner menus and Sunday brunch along with the very popular lunch fare such as coconut polenta cakes with cabbage slaw and Sriracha, and the Southern Soul bowl of mushroom gravy, black-eyed pea tempeh, organic potato and brown rice. In the development stage is a teaching kitchen a couple of doors down. “I’m delighted by how much of Orlando is voting for healthy food,” Savage says. * Fern Creek Avenue, just north of Colonial Drive, thesanctumcafe.com —J.H. 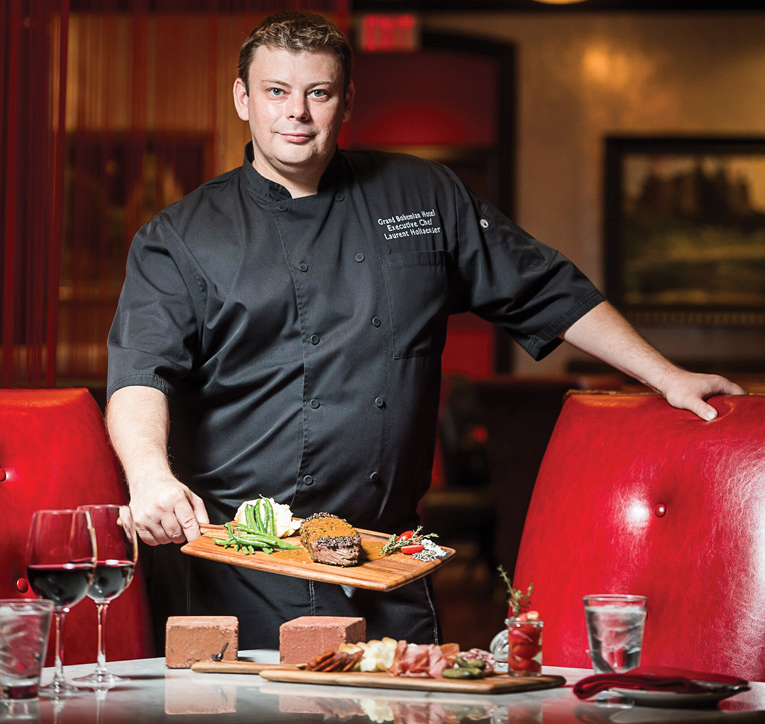 Executive Chef Laurent Hollaender arrived at The Grand Bohemian in 2012, bringing with him decades of experience in France, D.C. and New York. During a recent trip to France (“my first trip back after 10 years,” he says), he was inspired by the elegant simplicity of the food. “I realized the food there was so much better than what I was cooking in Orlando. I was looking at new trends too much, with too many things on the plate.” Hollaender’s enlightened rededication to focused cooking may prove to be even more exciting than the superb food he’s already been creating, with hints of French street food, a focus on impeccable vegetables, and wine dinners to come. * Across from Dr. Phillips Center, downtown Orlando, kesslercollection.com/boheme-restaurant —J.H.