Tampa and St. Pete boast an abundance of worthy new hotspots and legendary mainstays where you can eat, drink and be merry.

Being situated on our narrow Florida peninsula means you can watch the sun rise over the Atlantic while having breakfast, enjoy lunch in Orlando, then witness the green flash of sunset in the Gulf along with dinner. Indeed, just a 90-minute to two-hour drive from our city can transport you to a food-filled weekend on the West Coast, with some superb places to stay, eat and drink.

While you’re seeking out the local culinary hotspots, The Hotel Zamora (thehotelzamora.com) in St. Pete Beach is a sleek place to lay your head, a tiny gem sparkling between views of the peaceful Intracoastal Waterway and the vibrant Gulf of Mexico. The first new area hotel to be built in decades, the 72 rooms are sleek and plush, service is private resort personal, and the Castile Restaurant, led by Chef Louis Scaramuzzi, does wonders with seafood, like the yellow fin tuna poke dressed in sesame oil and crisp lotus root wafers.

The popular downtown Saturday Morning Market (saturdaymorningmarket.com) runs from early October to late May, offering a direct-to-consumer trade from the likes of The Dancing Goat “egg and milk boutique,” heirloom vegetables from Little Pond Farm and fresh catch from Fisher’s Seafoods. Its popularity has inspired a unique venture in the emerging Fourth Street North area: the Crescent Lake Market, an open-air food hall built on the bones of the old Monticello Motel, featuring cutting-edge chefs and vendors selling from the converted motel rooms.

In a gallery and restaurant-filled stretch of downtown’s Central Avenue, the trendy Mandarin Hide (mandarinhide.com) prides itself on a speakeasy vibe and vintage cocktails like Sazeracs and Sidecars.

The city’s Hyde Park and SoHo (South Howard Street) areas are abuzz with gorgeous Arts and Crafts homes and a burgeoning food scene. John Rivers just opened his latest 4 Rivers Smokehouse in the neighborhood, complemented by the funky Datz gastropub and treasures from the sea at Copperfish Seafood and Oyster Bar.

There’s no separation between restaurant and resort at the Epicurean Hotel (epicureanhotel.com). Built in partnership with the legendary Bern’s Steak House, the unquestionably boutique 137-room lodging sits at the edge of the Hyde Park neighborhood. Hand-polished Venetian plaster finishes the walls, and custom-built furnishings fill each room. From the wine store at the entrance and in-house patisserie to the justly celebrated Élevage restaurant led by James Beard Award finalist Chef Chad Johnson, the hotel wears its culinary trappings proudly. The most interesting amenity might be the Epicurean Theatre, a demonstration kitchen offering classes for wine pairing and Thai cooking, local restaurant competitions, and events featuring celebrity chefs like Norman Van Aken and Simon Majumdar. It is extraordinarily lush in every respect.

The grandfather of the Epicurean is Bern’s Steak House (bernssteakhouse.com), just across the street. The family-owned eatery grew from humble beginnings when advertising man Bern Laxer opened a strip mall breakfast joint in 1956. The industrial exterior in no way prepares you for the slightly mad trappings within, a warren of red velvet rooms, Romanesque sculptures and weathered white brick. From the 65 different cuts and weights of perfectly prepared steaks to the 85-page wine list; an in-house cheese “cave”; a staff including 20 pastry chefs and 8 butchers; and an upstairs Dessert Room constructed of California wine barrels, a visit to Bern’s is mandatory.

Restaurant BT by Chef BT Nguyen (restaurantbt.com) offers twists on classic French-Vietnamese cuisine with some of the most stylish plates in Tampa. The Peking duck burrito and green papaya salad are almost too pretty to eat. 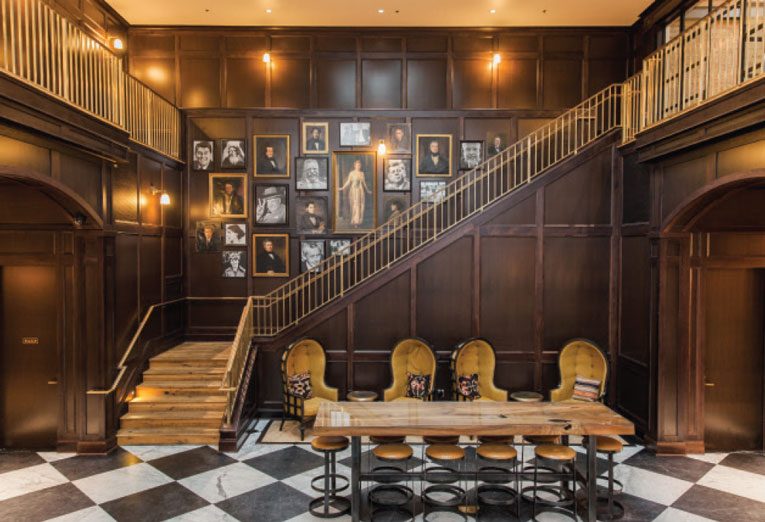 The gorgeous atrium at Oxford Exchange.

Downtown, the Oxford Exchange (oxfordexchange.com) opened in 2012, the brainchild of local business owners Allison Adams and her brother, Blake Casper. They resurrected an abandoned property that may have been the stables in the 1800s for the Tampa Bay Hotel, now part of the University of Tampa campus, to a glorious standard. The space glows with burnished wood and vintage brick, containing an immaculate Rizzoli bookstore, coffee and tea shops run by local suppliers, a gift shop reflecting Adams’ own unique tastes, and a 90-seat conservatory restaurant serving breakfast and lunch (the fried Brussels sprouts and spicy chicken burger are delights).