Norman Van Aken is already well known to Central Florida. Credited by Smithsonian Magazine as having revolutionized the American restaurant scene, Van Aken has won and been nominated for multiple James Beard awards, written several cookbooks and an autobiography, and is in Orlando magazine’s Dining Hall of Fame. 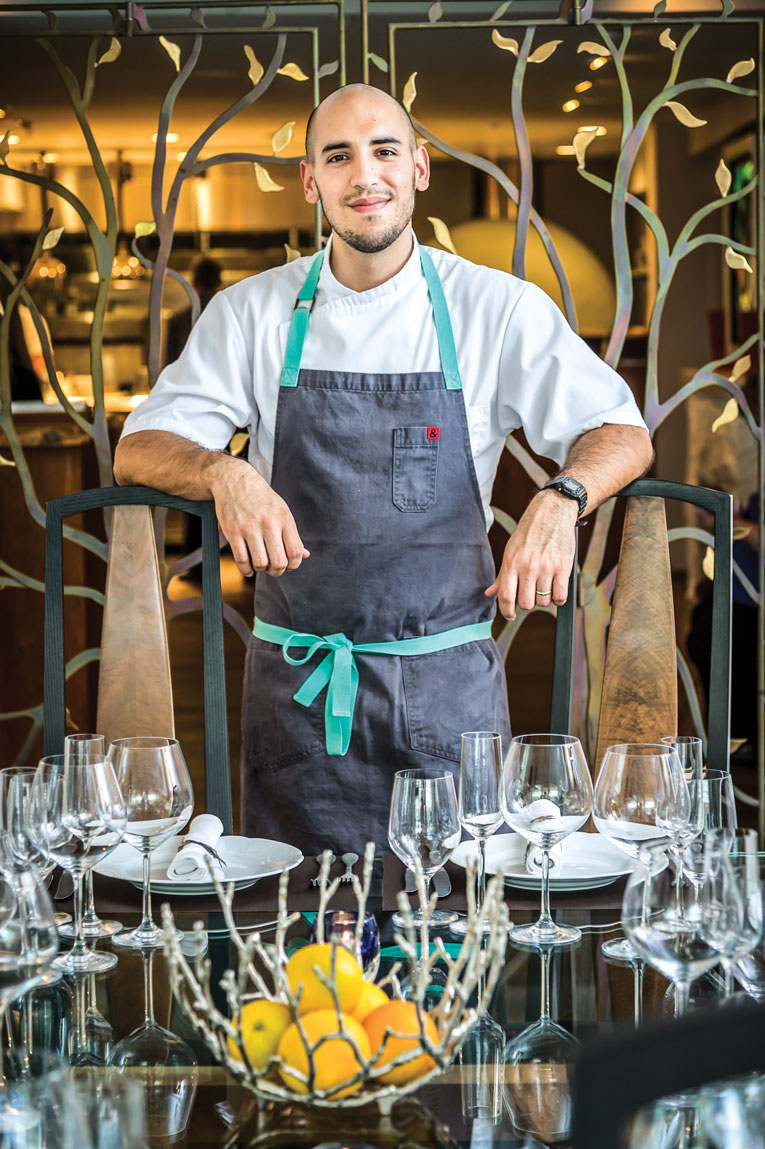 So when this high-powered chef announced he was opening a new restaurant in Mount Dora, a town known for antiques but not necessarily high-end cuisine, you could practically hear eyebrows being raised.

The 14-year-old Norman’s restaurant at The Ritz-Carlton Orlando, Grande Lakes, is a culinary landmark, and Van Aken’s recent opening of a cooking school and restaurant in the Wynwood section of Miami is already changing that area. While he has looked at restaurant locations as far afield as Los Angeles, he says, “Our happiness is in Florida.” A casual visit to Mount Dora led to discussions, and Van Aken saw the potential in this very residential town.

But there was more to this venture than an opportunity to open a celebrity chef showcase. Food and the arts are powerful influences that can change and revitalize neighborhoods. With 1921’s association with Mount Dora’s Modernism Museum—which has lent artwork and furniture to the restaurant—Van Aken has a chance to leave a lasting mark on this community. How many times does someone get the chance to transform a town? 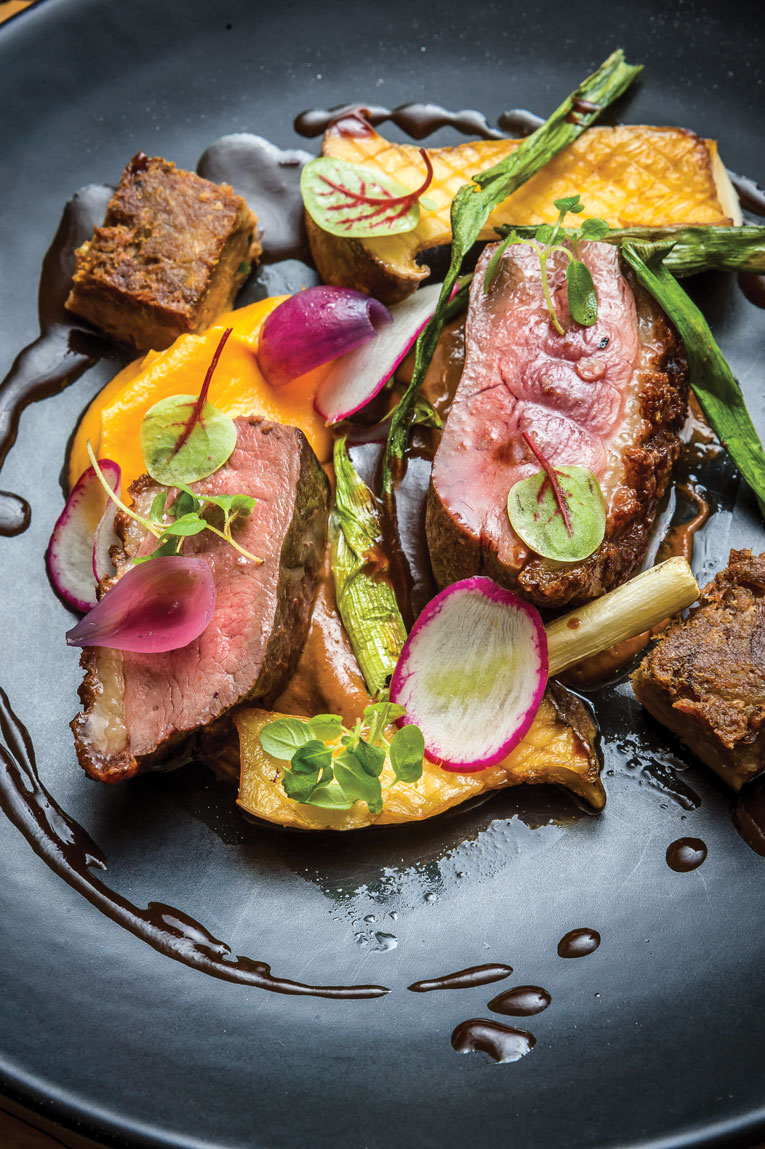 Just as his Norman’s offerings are New World cuisine, Van Aken calls 1921 New Florida Cuisine. “This restaurant isn’t a time capsule,” he says. “This isn’t food out of The Yearling.”

It is, in fact, a love letter to Florida. Chicken from Lake Meadow Naturals, New Smyrna clams, Key West yellowtail, Florida wreckfish and produce from farms mere minutes from the front door highlight the menu.

Read the descriptions carefully, roll the idea of each ingredient and combination thoughtfully around your tongue, and you’ll begin to understand the depth of skill that goes into each dish.

Spheres of local heirloom tomatoes, watermelon and avocado ($10) have a freshness that makes you rethink salad. Pan-roasted duck breast, sweet potato cooked in a hot wood oven, Ancho pepper and guava jus, rich mole sauce enriched with poblano pepper. Each level of flavor builds on the last, the lush, almost beefy duck elevated by guava sweetness, the flavor and smell of smoke and chocolate mole as complex as fine wine ($35).

A starter of Florida spiny lobster and rock shrimp dumplings ($12), enrobed in house-made pasta and partnered with shiitake and lobster mushrooms, is bathed in the concentrated flavor of country ham dashi stock. The “Korea Town” fried Cornish hen ($24) is juicier, lighter and less crystalline crunchy than Korean chicken, and highly addictive. Each dish is strength upon strength.

Chef de Cuisine Camilo Velasco pilots the ship daily, and he is the perfect steward for Van Aken’s vision.

Not yet in his 30s, Velasco was born in Cali, Colombia, coming to Florida with his family when he was 14. “I grew up eating one thing—what we eat in Colombia,” he says.” When I came to America there was new food at every corner. I thought the best way to discover my new home was in food.”

Velasco enrolled in the culinary program at Valencia Community College, and his talent landed him in the kitchen of Victoria & Albert’s while he was still in school. Two years later, he was sous chef at Norman’s, then chef de cuisine at just 21. After a time in Miami, he returned to Orlando to head an experiment with dining at Barnie’s CoffeeKitchen. Then Van Aken called with a new proposition.

“It was everything I was looking for, “Velasco says. “Chef [Van Aken] is very trusting. I understand his philosophy. A lot of the menu at 1921 is a collaboration between us.”

While Norman’s in Orlando basically re-created the food from his former restaurant in Miami, none of the same dishes appears in Mount Dora. “Really complex dishes are fun,” Van Aken says.  “Here I’m looking to simplify, to focus down to what is really essential.”

Occupying the former Garden Gate Tea Room, with the year the building was erected, 1921, embossed on the wall, the restaurant sits next to the gift shop of the Modernism Museum. Across the street, the Modernism is so integrated into the atmosphere of the restaurant that a walk through the museum is like an appetizer, and an ideal visit should begin there.

But meandering through the Modernism doesn’t prepare you for the multi-leveled 1921, its use of wood and metal, the tree of life wrought-iron gates in front of the chef’s table, or the attention to detail, from flatware to refurbished floors. Special notice must be given to general manager and sommelier Scott Geisler, who has an unerring sense of wine pairing.

When asked about the differences between running grand restaurants and this intimate eatery in a small town, Van Aken says, “The approach I take at 1921 is more like making a play than making a movie. But it is still theater at the end of the day.”

To which I say, bravo.

Modernist Jewel
The Modernism Museum across from 1921 is a breathtaking tour de force of understatement. No staged mannequins or ticks of choreographed lighting; just a representation of the "greatest hits" of the Modernist craft movement. Staircases reminiscent of Dali-like trees, everyday objects such as record players crafted as art, and the one-of-a-kind Steinway Caligari Piano all add up to a stunning collection. modernismmuseum.org​