The Sky’s the Limit with Aerial Yoga 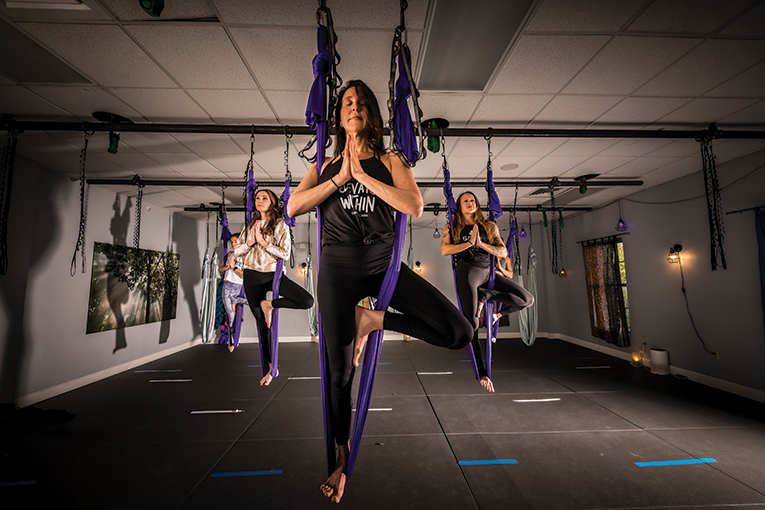 Maybe you’ve been in awe of Cirque du Soleil artists who perform acrobatics in the air while they’re  entwined in long strands of silk. Now imagine developing those skills as a fitness regimen, or using looped strands of silk to take yoga to the next level. Many exercise enthusiasts have not only imagined it; they are on that silk road to fitness through aerial artistry.

When people see aerial acrobatics they always think it’s so hard, says Carol Hendren, a student at Orlando Aerial Arts. “They say, ‘I could never do that.’ It’s surprising that some of the things you see in a Cirque show are actually accessible if you have good equipment and the right instruction.”

A longtime yoga enthusiast, Hendren sampled an aerial class a decade ago and kept going back. “The cool thing about the aerial studio is when you go to a class, it doesn’t feel like exercise,” says Hendren, who dislikes lifting weights. She credits aerial workouts with helping to strengthen her core, increase her upper-body strength and improve her flexibility. Safety is a priority, she notes, as instructors help participants progress at heights with which they are comfortable.

According to Jennifer Drabik-Pierce, owner and artistic director of Orlando Aerial Arts, those heights can extend to 28 feet off the ground. “Most things can be performed low to the ground,” where students can build confidence, she says. But as students master techniques such as drops and inversions, they require more height and clearance, she explains. Acquiring those skills requires time and individual instruction.

Whereas aerial arts work uses a pair of long silks, aerial yoga uses one long, looped silk hammock suspended from the ceiling on either end. In aerial yoga, the silks are “mainly used as a fun workout,” says Michelle Brown, instructor and owner of Vixen Fitness Orlando, which offers classes in both aerial arts and aerial yoga. In aerial yoga, students go no more than 2 feet off the ground, while on aerial silks, “you can go to the ceiling”—18 feet at her studio. 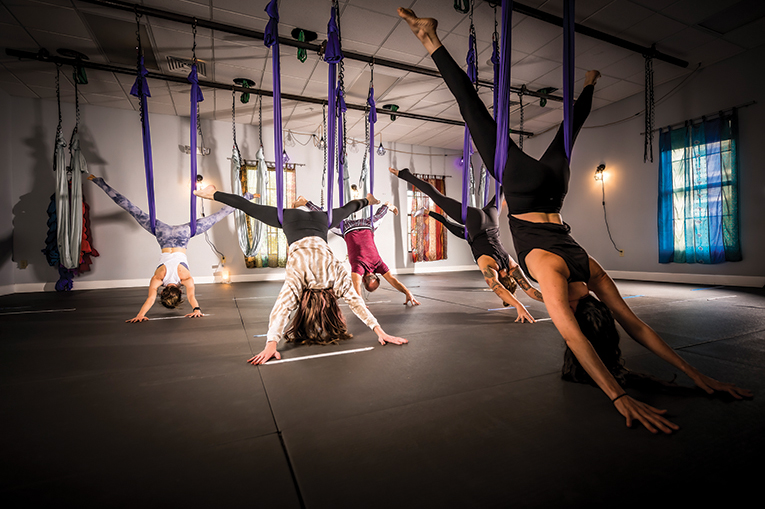 Fear of heights (acrophobia) is addressed early on, Brown says, as it must be if you want to cavort midair on a length of fabric. Brown has seen students overcome their fear after four to six sessions. “Our suggestion is to take at least four to six intro classes and then move on to a beginner class,” she says. “By the time students get to the beginner level, they’re a little bit more confident with climbing. When they continue to take classes, they see the way their bodies [get toned] from the strength it takes to lift their own body weight.”

For yoga enthusiasts, the silk hammocks allow students to “get into postures you may not ever be able to get into on the mat because [the hammock] gives you support. It’s great for accessibility, flexibility and building your own strength,” says Niki Kincade, aerial yoga instructor at Elevate Yoga Center. “You will build upper-body strength because you’re holding the hammock in a lot of postures, so your grip strength will increase. You’ll work your shoulders, arms and core.”

All three studios offer classes for adults—men and women—as well as for children. “Typically, our ladies tend to have more inherent flexibility, and the guys a lack thereof. If someone comes in, whether male or female, we make sure we customize those exercises and then we give them little tips and tricks that will help them be successful,” Drabik-Pierce says.

“Kids love it,” says Kincade. “It allows them to be the kids they are,” while gaining strength, flexibility and confidence through aerial exercises.

Brown has experienced for herself the benefits of aerial fitness. “Before I opened Vixen, I had arthritis really bad. I have no pain now,” she says.

For Elevate Yoga student Jennifer Bourque, the effects have been both physical and mental. “Being suspended with the hammock provides that level of support where you can let all the tension go from your body,” she says. “When I can’t get out of a depressive episode or I have high anxiety, I just come here, and it’s almost immediate relief,” she says.

For fellow class member Caroline Buendia, her aerial fitness regimen provides relief from back injuries as well as a healthy dose of self-care. “It doesn’t feel like a workout,” Buendia says. “It feels as if you’re living one hour of your day for yourself, and you’re doing something to give back to yourself.”