Half tasting room, half gallery, The BANDBOX reimagines the lounge experience, but without alcohol. 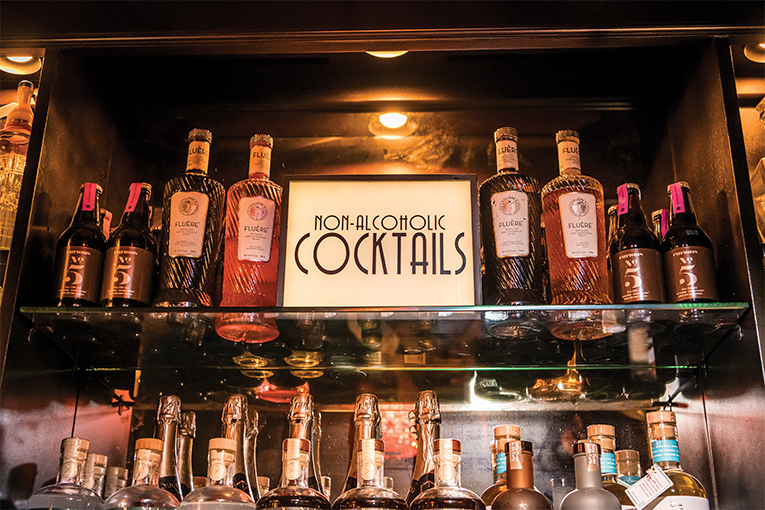 The BANDBOX will offer alternative spirits made without alcohol. (ROBERTO GONZALEZ)

So, you want to go out and have a good time with friends.

But you have to be up early in the morning.

At The BANDBOX, opening in late spring, you won’t need an excuse not to consume alcohol. But you’re still guaranteed a craft beverage and an intimate space to gather with friends.

The non-alcoholic bar isn’t a new concept. Dating back to the late 1800s, the Dry Bar, or Sober Bar, has made its way around the U.S., primarily in markets like New York, Austin and California.

Now, The BANDBOX will bring the same experience to The City Beautiful with an anticipated late-spring opening.

Initially an Art-Deco-inspired boutique art and photo gallery with vintage goods and collectibles, The BANDBOX morphed into a spirit-free tasting lounge once owner Kevin Zepf considered offering non-alcoholic drinks to guests, similar to the way galleries offer wine and beer for exhibitions.

“Our goal was to provide a place for those non-drinkers or those who are sober-curious to have an evening social experience where they can be surrounded by other non-drinkers and not feel pressured to drink alcohol,” Zepf said. “Our judgment-free zone takes that edge off knowing that a majority of our guests understand that you don’t need alcohol to have a great time.” 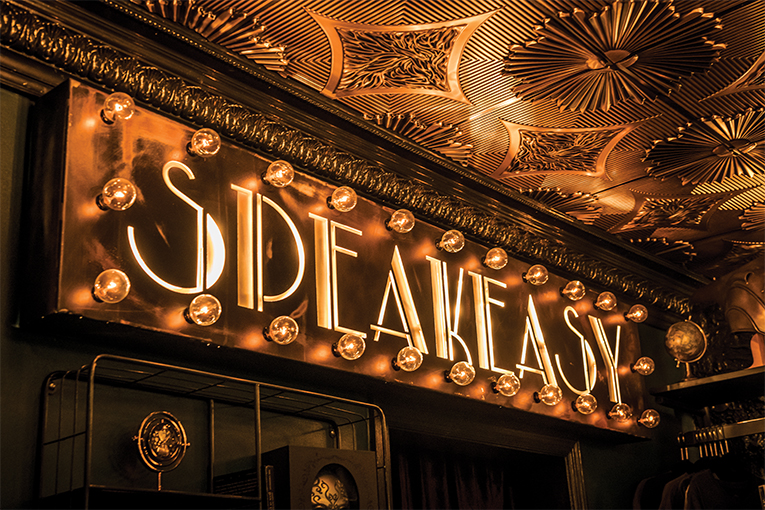 This is not a ‘Mocktail’

Let’s face it: that term is tired. It’s often associated with pre-made, batched drinks served from a pitcher. At The BANDBOX, non-alcoholic craft cocktails are made with a variety of alternative spirits like gin, rum, whiskey or tequila (sans-alcohol) and sometimes mixed with juices, syrups, mixers, bitters and traditional garnishes.

“These non-alcoholic spirits are meant to mimic the flavor profile of their alcoholic counterparts,” Zepf said. “Each one is crafted with the intention of keeping the calorie, sugar and sodium intake on the lower end…but they try to maintain…the kick you would expect from drinking the real thing.”

The tasting lounge menu at The BANDBOX will feature a mixture of zero-proof craft cocktails, alternative pre-packaged non-alcoholic cocktails, sparkling alcohol-free wine and craft beer, leisure sodas, vintage fizzy pop and more. Plus, The BANDBOX will be an exclusive distributor of some selections (NOPE, GinISH, RumISH, and more), so you can try drinks that aren’t available elsewhere in Central Florida.

“Our goal is not to convert guests into non-drinkers but rather open minds and educate guests surrounding all the new non-alcoholic options and alternatives available in the market today,” Zepf said. 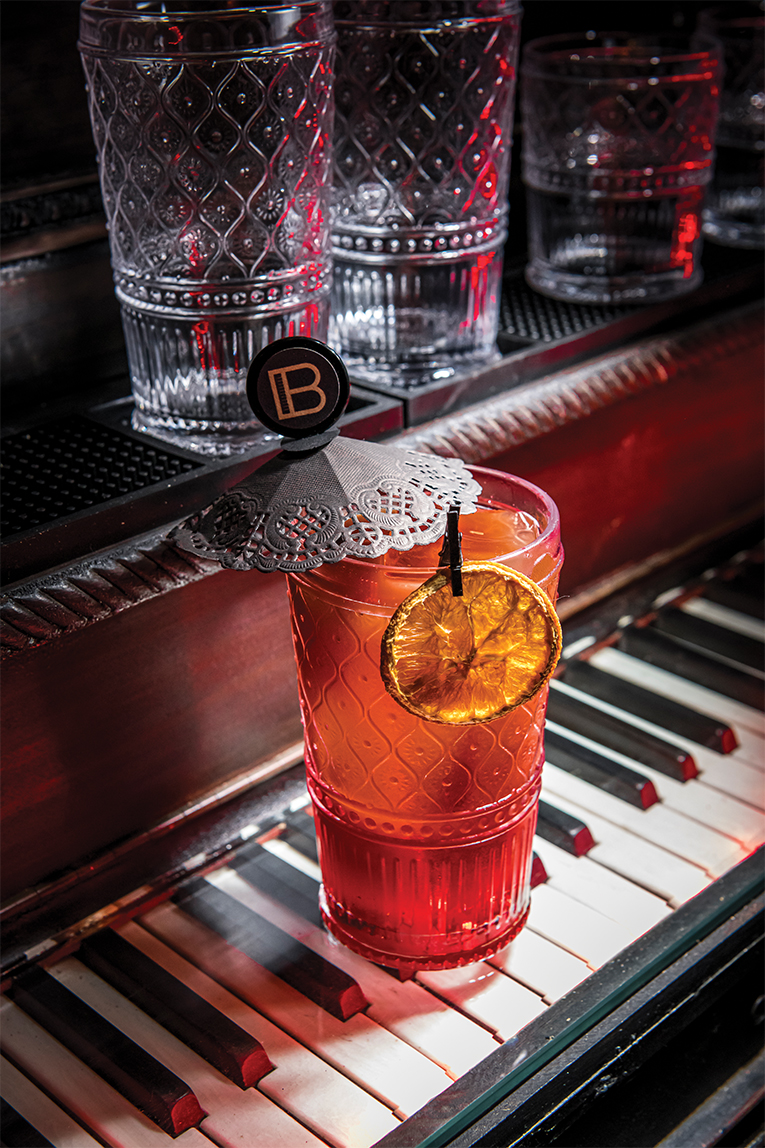 That’s the Berries. Both cocktails are buzz-free. (ROBERTO GONZALEZ)

Zepf and his team began scouting the Mills 50/Ivanhoe Village area due to its popularity for nightlife and finally secured the space for The BANDBOX in 2020. Walkability and perception of safety—both indoors and out—were considered when imagining The BANDBOX.

“We [wanted a venue where] we could recreate that NYC restaurant vibe; a setting with a smaller number of tables that fosters more personal interactions between staff and guests that sometimes gets lost in larger open spaces,” Zepf said.

The Art Deco-inspired interior provides an intimate experience for guests. In line with the 1920s theming, there will be Hollywood-Regency-style swag lighting, flickering candlelight, antique gold ceiling tiles, velvet drapery and chandeliers to set the mood.

“While we won’t have a dress code, we do recommend dressing it up a bit so you feel as chic, sharp and glamorous as the venue itself,” Zepf said. 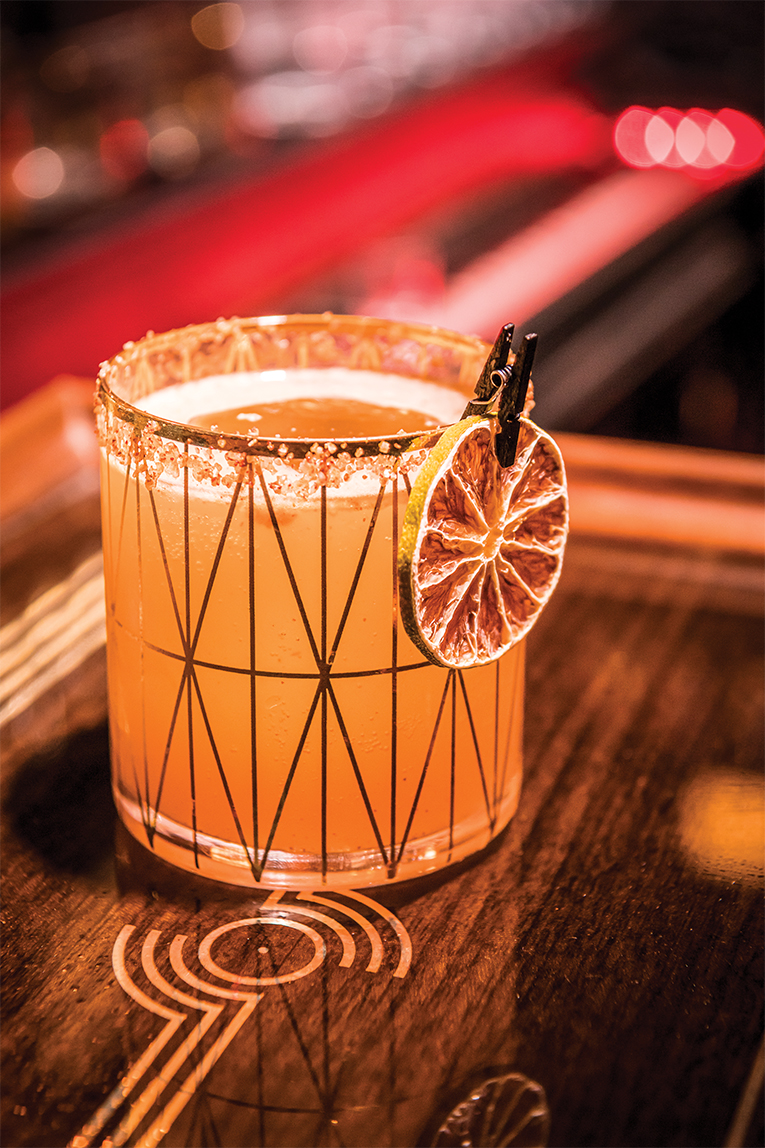 Fire in the Engine. (ROBERTO GONZALEZ)

On the walls and ceilings, patrons will find artwork, photography, collectibles and lighting fixtures available for purchase.

“Our ultimate goal is to inspire and actively foster creativity and to acknowledge and celebrate Orlando’s unique history,” Zepf said. “We were thinking…of a curated mini museum, but rather than everything behind glass, you can pick up or interact with a majority of the objects,” Zepf said.

In addition to artwork and non-alcoholic cocktails, patrons will be drawn into the experience with costumed staff, live music and performers, tableside magicians, vintage black-and-white films, table games and a complimentary photo booth.

“The BANDBOX will be an ideal date night spot to start your evening, [whether you] plan to pregame with us for a non-alcoholic beverage before hitting the bar scene downtown or perhaps later in your plans after you have spent your evening in the bar scene. We consider ourselves the perfect bookend experience to either start or end your evening.”

Looking for more non-alcoholic, crafted drinks? While we anxiously await the opening of The BANDBOX, try one of these spirit-free options at other local hotspots.

Designed to mimic the ultimate summer vacation, Grills’ mocktails come in a variety of options, from the Deckhand Daiquiri (minty mango daiquiri served with whipped cream) to the Marooned Margarita (non-alcoholic watermelon margarita served on the rocks with a salt rim).

Though there are no set zero-proof cocktails on the menu, The Courtesy recommends asking the bartender to craft one, as they do so all the time.

Be their guest…just without the spirits. Instead, try the Garden Spritzer (herbal distilled non-alcoholic spirit, lime, agave, soda) or the Rosemary Cooler (lemonade, vanilla, rosemary).

This article appears in the April 2022 issue of Orlando Magazine.
Categories: Dining
Tags: Craft Cocktails, mocktails, Tasting Room, The BANDBOX
Want to read the whole issue? Download and read this issue and others on Magzter.