Wolfgang Puck’s new venture at Disney Springs showcases the true talents of the famed chef, with standout offerings of pasta, seafood and pizza.

Fame is a funny thing. At Wolfgang Puck Bar & Grill, the latest iteration of Disney eateries by the prolific chef, a woman approached the namesake chef in the lobby and simply stated, “I’ve seen you on TV!”

Of course she has.

The name “Wolfgang Puck” can be found on more than 40 restaurants from Detroit to Shanghai, Las Vegas to Qatar (eight in Japan alone), including several branches of his iconic Spago; at 24 additional airport locations; and in supermarkets, kitchenware departments, bookstores and newspapers. A hotel I stayed in recently had a packet of Wolfgang Puck coffee on the dresser. And, of course, there’s television. He played a character on The Simpsons, pushing wasabi-infused Rice Krispie squares. And was on the show Tales From the Crypt. And was the voice of Chef Smurf. And has appeared on too many Top Chefs, Hell’s Kitchens and other food shows to count. 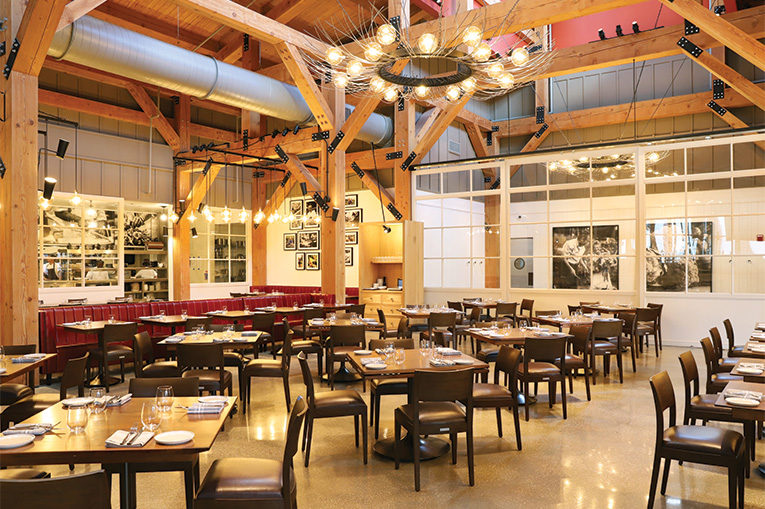 I sat down with the famed Austrian chef at his new restaurant at Disney Springs and asked how it feels to see his name everywhere.

“I don’t think of my name as a brand,” he says in his distinctive accent. “I don’t think about that big picture. I compartmentalize everything in my life. It seems to have worked so far. By accident.”

Puck’s “accidental” cooking career started at age 14 in Austria, and has included an astounding array of culinary lights: Hôtel de Paris in Monaco, L’Oustau de Baumanière, Maxim’s Paris and the legendary Ma Maison in Los Angeles, where he became chef and part owner at age 26. His iconic Spago opened in 1982. Michelin stars, James Beard and Daytime Emmy awards and, unusual for a chef, a star on the Hollywood Walk of Fame followed. He has been the official caterer of the Academy Awards Governors Ball for more than two decades. And yet he has remained relevant and thriving in a very cutthroat market.

“We have an evolution,” he says. “We have to be willing to change.”

Change is most evident in the transition to Bar & Grill from the multi-venue Grand Café, which closed last August after a 20-year run as part of the original build for  Disney West Side. If you’ve only eaten at that restaurant, you haven’t experienced the food of Wolfgang Puck. Financial considerations forced him to sell Grand Cafe to Levy Restaurants Inc. soon after it opened, but the name was retained under license. It was not a happy situation for Puck, who was dissatisfied with the quality of the food. The combination of contracts ending and the arrival of José Andrés’ Jaleo on the Grand Café spot allowed Puck to build Bar & Grill under his own company. 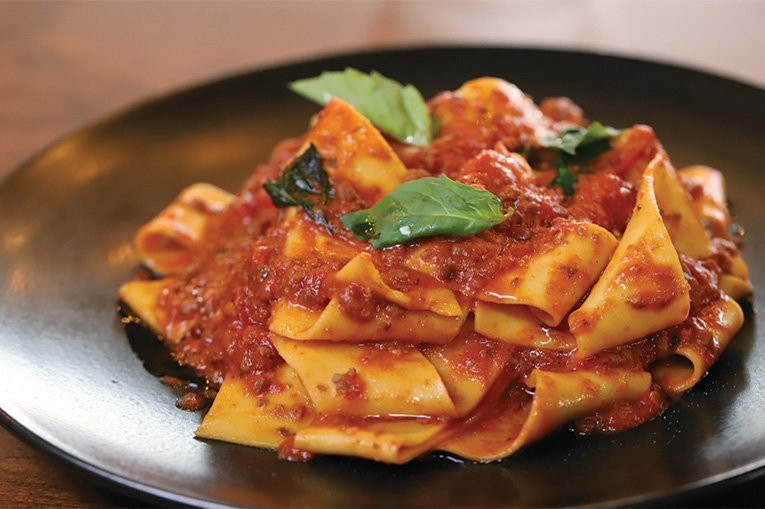 Gone are the funky, ’90s era California trappings, the pastel and Formica surfaces—and the sushi (which people still request). In place are chunky barn beams, clean lines and artistic lighting. It is a fine place, serving from its open kitchen creations by Executive Chef Michael Tiva, a Florida boy who spent many years at Puck properties in Las Vegas. He’s happy to be away from the desert and in Orlando’s fertile environs.

“In the desert, the local produce market was 4½ hours away,” Tiva says. Here, “I was just at Lake Meadow Farms visiting the chickens. I can take a quick drive and gather blueberries. Local burrata. Tomatoes in October! It’s amazing.” A simple dish such as pappardelle ($25), the pasta hand-made with Lake Meadow eggs and a traditional Bolognese meat sauce, is a delight. “In Vegas,” Tiva says, “I would have to buy specially-fed fertilized eggs to get that rich yellow color that I’m getting here right from the farm.”

To prove the local sourcing point, head-on Canaveral wood-grilled shrimp ($15) is a savory appetizer, served on a luscious white bean ragu. Tiva has a refined touch with seafood; poached and seared Florida red snapper ($34) is elegantly served with clams, mussels and fingerling potatoes. The whole grilled sea bass ($41) atop a shaved fennel salad is respectful of marvelous fish.

Puck made his reputation on California-thin versions of that Italian staple, the pizza. At B&G, pizzas from the classic Margherita, with mozzarella from Orlando’s Agostini Factory and primo San Marzano tomatoes, to Puck’s signature smoked salmon are made from three day house-raised sourdough starter and fired in a beautiful copper-clad 600-degree Wood Stone oven.

The ever-evolving Puck says of Disney Springs, “I take this place very seriously.” And it shows. Bar & Grill is so much more than a bar and grill, and more than we’ve seen of Wolfgang in many years.

In his younger days, Puck was the screaming chef stereotyped in movies and TV. “It was like in another life,” he says. “When I started, the chef used to come behind you and kick you in the butt, a slap in the face, it was how it was. But when I went to Maxim’s, I screamed at someone, and the chef said, ‘I hear you screaming at someone one more time, don’t wait for me to tell you—just leave.’ So you learn.”