On the Philippine territory of Luzon, you can explore an island in a lake that itself is on an island, which in turn is in a lake on an island. In Orlando, you can dine on a boat, on a lake… inside a hotel, under glass, and be glad for the visit.

Complete with lit rigging and full sails, the proud wooden ship Gaylord is moored just outside MOOR, the flagship—pun firmly intended—restaurant of the Gaylord Palms Resort & Convention Center, a hotel complex so vast that it contains a water park, tropical gardens and re-creations of Key West, St. Augustine and Everglades environments under its 4½-acre glass atrium. Within the Key West dome is a manmade water feature filled with Florida native fish (big ones) and a walkway that leads to the sailing vessel and the fine restaurant that sits on its dock.

Once doing business as Sunset Sam’s Fish Camp, the rejuvenated MOOR is called a “sea to table” restaurant, proudly listing the locations of their “off the hook fresh” seafood, which changes daily. Fish may include mahi-mahi from Fort Pierce; hogfish, a sustainable, spear-caught reef fish with fabulous taste and texture, from Madeira Beach; and tripletail, a surprisingly abundant and delicious warm-water fish from Cape Canaveral. 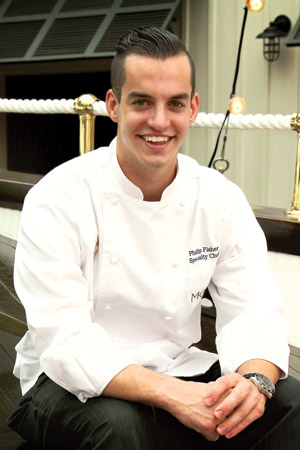 The Gaylord’s executive chef, Paul Player, oversees the restaurants in the resort, of which there are several, including the very tony Sora sushi bar. But the hand of Specialty Chef Phillip Fisher is on every dish at MOOR. Still in his early 30s, Fisher began his culinary career in his teens, working as a sous chef in North Carolina, at the Amelia Island Plantation Club and at the Ocean Key House Resort in Key West. True to his name, the man knows seafood and what to do with it, which sometimes can mean a preparation as simple as a quick sauté and placement atop a beautifully made risotto.

Among Fisher’s masterly statements is the she-crab soup ($8), a staple of the Carolinas, rich with long-simmered court bouillon, Atlantic blue crab, cream and sherry—something the chef probably learned to make at his mother’s knee. Shrimp and grits may have become as ubiquitous as French fries, but Fisher’s version of Gulf-caught white shrimp atop Anson Mills white corn grits ($29) has complex flavors of andouille sausage and drizzled brown butter to lift it above commonplace.

Even the flatbreads—and I am honestly weary of flatbreads—are special, with firm crisp dough and an actual taste of their own, topped with house-smoked duck and goat cheese ($16), or crab brightened with fresh lemon ricotta ($19).

The kitchen uses chicken from Lake Meadow Naturals for their chicken and waffles (made with scratch ricotta cheese and drizzled in maple syrup-reduced pan drippings; $29), adds corn from Zellwood to its grits when in season, and steams famed Cedar Key sweet clams in IPA from Winter Garden’s Crooked Can Brewing. Something as simple as a burger shows commitment to the seasonal and hand-crafted: local heirloom tomatoes, pickles and apple slaw made in the kitchen, cheddar cheese from Cypress Point Creamery near Gainesville and fresh ground beef.

Baking, pickling, sausage making and salad staples are home-grown. There are casual condiments on the menu, such as green tomato chowchow, bacon jam and tomato aioli, that should be sold by the jar. Herb and vegetable gardens are visible both hanging on the walls of the restaurant and in spaces within the atrium. Plans call for larger plots outside on resort grounds, and with the hotel sitting on 63 acres, they should make for quite a salad.

Outside, and there is a real sense of being outside regardless of the fact that you are inside (this may get confusing), tables hug the shoreline and fill the 60-foot ship’s deck. All that’s missing is a light breeze and the creaking of the mast, which I’m sure could be done with a bit of mechanical wizardry. The inside space is tastefully appointed in wood and light tones, various rooms expanding out to side patios and a long stretch of agate stone bar.

The Gaylord is expansive enough to feel like a trip to another place, and there are few things more relaxing than a having a well-considered, wonderfully executed meal while messing about in boats. Especially when the boat is serenely attached to the shore. The menu suggests that you “moor yourself to a good time,” and I would have to agree.

MOOR’s dessert assortment, mini canning jars presented inside a handsome wooden toolbox, may be the most adorable/best man-toy I’ve ever seen in a restaurant. A decadent peanut butter pie laden with dark chocolate, refreshing Key lime with flavors of South Florida, angel food cake layered with strawberries and a thick S’mores concoction, come in at $4 each and I dare you not to order them all.