In praise of our nourishers as they strive to weather this crisis. 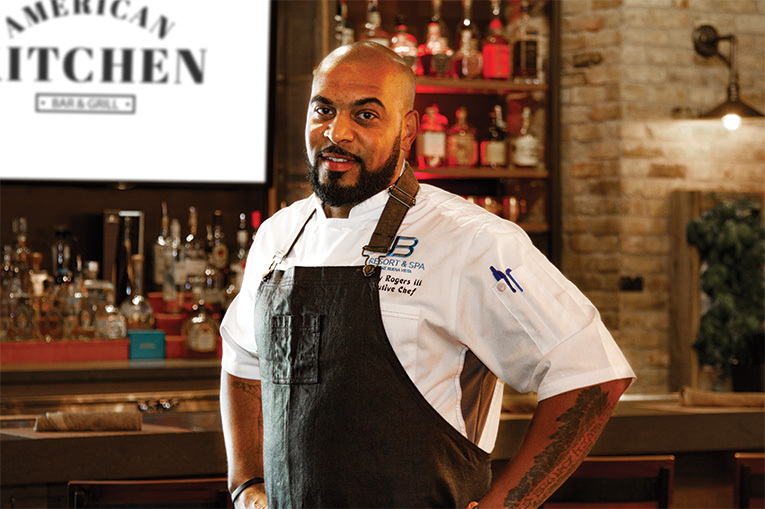 Prophetically, the concept of ghost kitchens had been the buzz of early 2020, “restaurants” that have no public space but operate via online ordering and delivery, growing from underground to a viable business model.

Skip to March, and all of Orlando is a ghost kitchen, the food scene a ghost town.

I’m going to trod on some rules of journalism here. First, journalists are supposed to be, expected to be, objective and impartial (quite a fanciful statement these days). It’s different with criticism. The best of us convey our experiences; how else can we say if one restaurant or chef or dish is better than another? And we’re definitely not supposed to get involved with our subjects.

So, I’m breaking those rules. Because I care about this community of food people, some of them are my friends (who I continue to review when necessary, always objectively and truthfully, and they know that). I am involved in this scene not only as a reviewer and writer, but I’ve produced several dining experiences as part of my theater and jazz projects. So, I’ve heard about the pain of this New Society not only through news reports, but directly from those affected.

I’ve been writing about all things Orlando since 1997, and the growth of its culinary landscape has been extraordinary. When official word came down that all dining rooms were to be closed, you could almost hear the collective gasp, but I think it is because we have progressed and matured so far that owners and chefs were able to adapt and hold out as long as they did.

The coronavirus pandemic has hit writers along with their subjects. Everyone who has ever written about, photographed or eaten food has published a list of take-out options in Orlando, and why not? We don’t have anything else to write about. But the parameters have changed almost hourly: in one day, proclamations went from half occupancy to pickup only to locked bars. Six-foot distancing has become curfews and mandatory orders to stay at home. Whether it’s limiting seating, cutting hours or simply closing the doors, the options for chefs and owners have been painful.

James Beard winner Melissa Kelly (Primo in Orlando and Maine) has taken to her New England-based kitchen to assemble pre-packaged meals for curbside pickup. With the Orlando location shut down (along with the entire Grande Lakes two-resort complex), Kelly has concentrated on keeping her flagship restaurant running–in a way. “It’s me and two cooks,” she says. “One on the phones, one running food to guests.” Normal staffing at the 150-seat restaurant comprises eight cooks, two dishwashers, 12 servers, plus prep cooks, managers and three farmers. “I’m making about 150 meals a day right now.’’

Kelly admits it is a scary situation. “The loans to pay, the employees that depend on us … how can we plan? It’s day by day.” She does say that, at this point, an expansion and renovation of the Orlando restaurant that was intended for the fall is still in the works.

Others aren’t so fortunate. Rhys and Alexia Gawlak (Swine & Sons) informed me privately of upcoming plans for expansion and changes in their thriving but stressful business when we spoke at the beginning of March, plans that would be the culmination of a years-long dream. “We pulled out of the new project,” Alexia told me last week. “Too much unknown.” 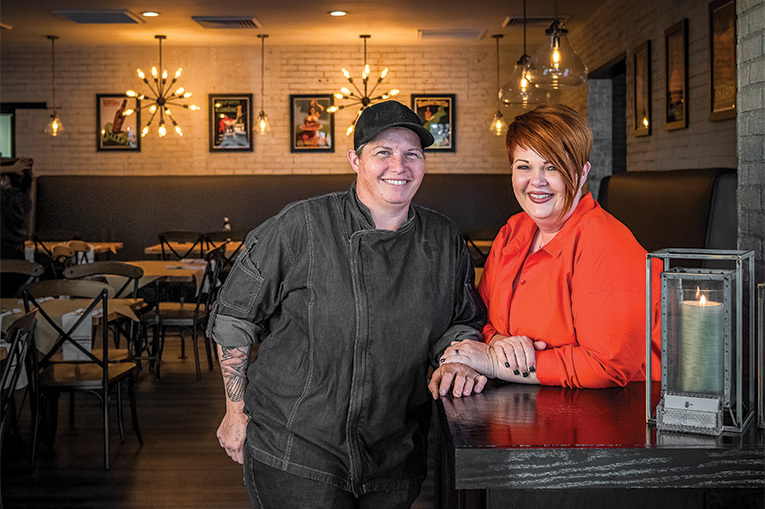 Maxine’s on Shine and the Se7en Bites/Sette family suspended their curbside and delivery services on March 23, three days after shifting to the new model; Lee & Rick’s Oyster Bar closed that night. “This is the right decision if we want this to be over,” Se7en’s Trina Gregory-Propst told me. “And if I have to set an example, then so be it. This is serious and I need to be responsible.”

Diners accustomed to eating out as their main social activity have treated curbside pickup as an evangelical mission, or a new form of Pokémon—gotta hit them all.

Some businesses, like P Is For Pie, kept their dining room open longer than most, but eventually switched to pickup only. Their business, based on made-to-order pastry as well as counter service, has been doing well. “Our midweek sales are pretty good,” co-owner Ed Tomljenovich told me. “And Saturdays, our busiest day, are holding on.”

Redlight Redlight fell under the “bars and nightclubs closed for 30 days” restriction set up by the state on March 17, and immediately switched to a takeout model. Owner Brent Hernandez told me, “It’s like a never ending hurricane but we still have power. We’re getting by, barely, but still thankful for the support!” Once restaurants were ordered to lock their doors, pickup options were allowed to include alcohol sales, a primary source of profits in the margin-thin dining trade.

Meanwhile, restaurants like the recently opened Sixty Vines and The Porch are selling family packs, party packs and “quarantine kits” of meat and produce—basically paring down their larders while they can. Seito Sushi, Reyes and Osprey Tavern, owned by Jason Chin, are offering “ready to cook” dinners along with grocery staples—milk, eggs, proteins and produce—from their supply.

Plants don’t stop growing because there are fewer places to sell the produce. Restaurants are trying to help the small farmers and suppliers that feed us. Chelsie Savage’s three restaurants, Proper and Wild, Sanctum and Sanctum Coffee & Juice Bar, have moved to a dedicated online ordering system for their takeout options, and are pickup points for local growers Sugar Top Farms and Frog Song Organics. Lake Meadow Naturals (whose chickens don’t care about a pandemic) has teamed with Winter Garden growers The Farmacy to sell their produce in the LM store. Dexter’s New Standard is doing the same with Waterkist Farms. Olde Hearth Bread Co, already taking curbside pickup orders, offers flour and sugar at $1 a pound. On March 25, they became the last artisanal bread bakery in the area still operating.

Venoy Rogers, executive chef at American Bar & Grill, is also struggling through this limbo. “I’m doing better than a lot of my compatriots,” he says. “But our dining room is closed. The pool bar has a small menu and we’re still feeding employees in the hotel’s cafeteria, but the hotel itself [B Resort & Spa] is down to about 10 percent occupancy. In fact, we started cutting services three weeks ago when management saw a substantial die down in reservations. All of the events we had scheduled were canceled for the rest of the year, and that was even before we knew how bad this really could get.”

Rogers says this pandemic is much different from a hurricane, a fast-hit disaster we’re familiar with. “I’m normally an optimistic person, but we’re not going to just bounce back. It will take some time.” And then he brought up a point that is chilling. “Even if it ends relatively soon, we’re chewing up the end of the season; we’re going into what would be the slow season anyway.”

On the media front, Orlando Weekly, dependent on nightlife and restaurant advertising, laid off 13 people in all of their departments when owners Euclid Media Group slashed 80% of the workforce in its seven alternative weeklies nationwide. Without new restaurants to discover and dishes to photograph in painstaking detail, the formerly thriving food blogger universe has been occupied with lists of restaurants delivering food, sharing kitchens and shutting doors. Here at Orlando magazine, we’ve postponed our Dining Awards issue, which normally runs in May, and along with it the ceremony for the winners. Two weeks after I launched my own dining project, “Pompeii’s Table,” at the Orlando Science Center (designed to support their massive touring exhibition, Pompeii: The Immortal City), every one of my participants in the Italian-themed series of experiences was either on the delivery-only model or closed for the duration. I hope to pick up the series again when the world recovers.

The past few weeks have been filled with people doing their best to help themselves and benefit others, and much of it from this local community of good food folks: chefs and restaurant owners, servers and bartenders, farmers and writers and delivery people looking out for each other, trying to stay afloat so that they are able to continue or reopen when this calamity is done. There will be restaurants that cannot weather the losses and storefronts will remain dark (in a way, Lucky’s and Earth Fare got away easy by closing their stores at the beginning of the year).

Things happen behind the scenes, unselfish and heartening, that most of you will not hear about, that the doers of these things have told me, like “We don’t want this publicized, we simply want to help.’’ Forget the toilet paper hoarders and the brash snatchers of groceries. The fellow humans out here working on making another sandwich or gathering a box of mushrooms or bringing noodles out to your car are the ones who will help us through. They are the ones who nourish us, literally and spiritually, supporting themselves and each other in this time of social distancing. That is the story of this pandemic.

As chef Rogers says, “I’m hoping people will come back in when we get out the word that, hey, we’re still here.”

You can reach Dining Critic Joseph Hayes at joseph.hayes@orlandomagazine.com‘