New life comes to an old favorite, and it seems like Chef Melissa Kelly and her team are just getting started. 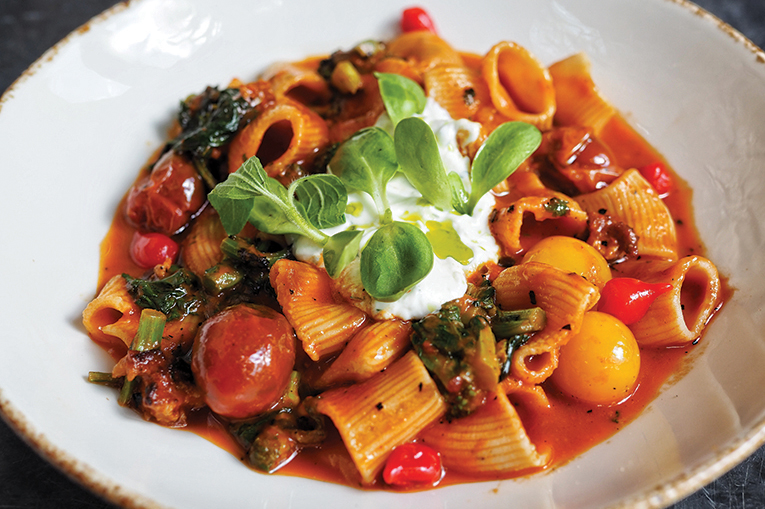 House made Fennel Rigatoni with Primo sausage, charred tomato, farm greens and silky ricotta is a feast for one, or shareable with friends. 9©LISA WILK/TASTECOOKSIP.COM0

Primo at the JW Marriott Grande Lakes is back. And it’s better than ever.

The restaurant by two-time James Beard Award-winning chef Melissa Kelly has a long history in Orlando, having originally opened its doors in 2003.

A recent months-long renovation saw not just a redesign of the menu, but of the space as well. “It’s not just lipstick and rouge. We’re gutting it,” Chef Kelly explained when we spoke recently. It was a project that may have been long overdue.

Kelly was approached to open the Orlando location just a few years after she opened the original Primo in Rockland, Maine. When she decided to take on the project, the Grande Lakes restaurant had already been created. “I came in late to the game when we originally opened. The kitchen had already been designed so there were challenges we’ve had the whole time that we’re fixing.”

Longtime fans of the space will certainly notice the changes to the front of the house, too. Gone are the heavy wood accents and the dated decor. The bar has been moved, the kitchen reconfigured. The new dining area takes its inspiration from the masserias of Italy’s Puglia region—large farm houses situated on estates, many of which have more recently been converted to hotels, where staples such as cheese, olive oil and wine are crafted.

Italophiles will recognize the design elements inspired by Puglia at once, from the entrance and bar that are fashioned after the traditional Italian courtyard, to tumbled limestone and handmade ceramic tile. The redesign pays homage to Kelly’s Italian heritage, but it’s also more in harmony with the Florida climate. “It kind of matches the Florida feel—open, lots of plants,” she explains. “Stone walls, light earth tone colors, lots of green.” And a more homespun aesthetic, which she says better matches her style of cooking. “Even the plates are more rustic. My food is pretty rustic; I feel like it lends itself to more rustic pieces than a white plate,” she shares.

Kelly wanted that new aesthetic to translate to the menu. “Small plates are a big focus for the new menu. The airiness of the dining room, I want that reflected in the food,” she said. Also, as she has evolved as a chef, locally-sourced ingredients have become her top priority. “Farm to table for me has become more about local than organic, because most of the local farmers aren’t using pesticides, and they’ve been able to figure out how to run their farms without putting poison in the ground,” she explains. As such, her philosophy, borrowed from Italy, is a standard of “Zero Kilometers.” It’s not enough, she says, to look at Florida farms. “We are looking at farms within 50 miles of the hotel.” 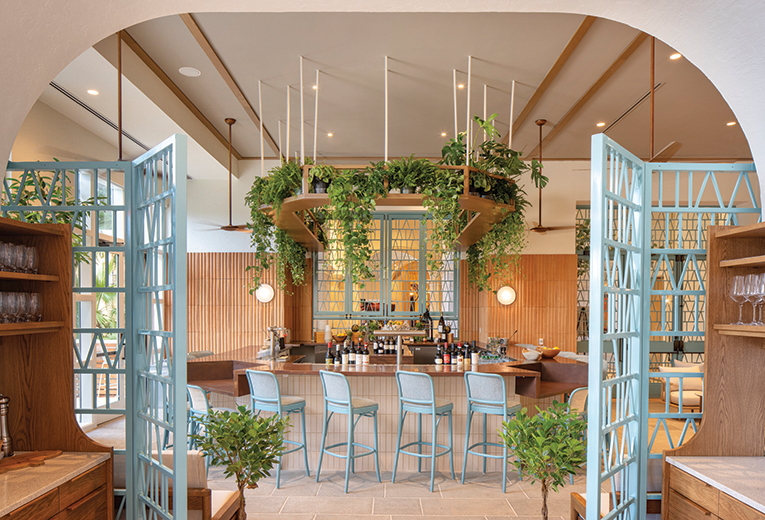 While Kelly believes that the term “farm to table” has been “wildly abused,” she strives to walk the talk. Although many aspects of the restaurant feel like it’s a brand new spot, her established relationships with local purveyors highlight Primo’s deep Central Florida roots. The restaurant sources fruits, vegetables, herbs, honey and eggs directly from the farms located on the resort’s property, which it supplements with produce from Mick’s Farm and Frog Song Organics. Kelly can’t raise pigs adjacent to the Florida operation like she does in Maine, so she sources them from Mountain Trail Farm in Clermont. She’s also worked with Lake Meadows Naturals from the beginning, and gets chickens and ducks from the Ocoee farm.

On two recent visits to the new restaurant—one date night, another with the whole family—we were impressed by the care and attention to each dish. We found many of the restaurant’s plates to be perfect for sharing, including a sublime Arancini stuffed with mozzarella and presented on a bed of perfectly-seasoned Bolognese; and the darling Manti, beef dumplings served in a tomato and chicken brodo. Pizzas baked in a wood-fired oven are also solid choices. You won’t go wrong with the Funghi, featuring locally-grown mushrooms, fontina, roasted garlic and sweet potato greens. But if your tastes run to meat, and it’s available, don’t skip a pie topped with housemade sausage.

Pasta dishes are shareable as well. Our favorite was the Fettuccine tossed with oxtail ragu, made with piquant shishito peppers and topped with creamy stracciatella for a magnificent contrast, but there’s really no wrong choice here.

Entrees that feature various meat options are also worth your time and plate space. On both visits, we opted for the beautiful Pork Saltimbocca, made with Kelly’s grandfather’s recipe, and a staple of the Primo menu. The Prime Beef Ribeye is a substantial option for meat lovers, and guests who prefer seafood will enjoy the locally-sourced Swordfish.

Finally, save room for the sweet stuff; the Grand Cru Dark Chocolate Cremoso is as lovely as it is delicious, with its creamy combination of praline emulsion and bright pear sorbetto.

Whether indulging in date night, celebrating a special occasion, or treating yourself to some of the best quality food available in Orlando, Primo is worthy of a spot on your 2022 dining list. Enjoy. And let us know what you order.

This article appears in the January 2022 issue of Orlando Magazine.
Categories: Dining
Tags: JW Marriott Grande Lakes, Melissa Kelly, Orlando, Primo
Want to read the whole issue? Download and read this issue and others on Magzter.