A Lo Cubano continues to gain fans and recognition for its inventive take on classic Cuban cuisine. 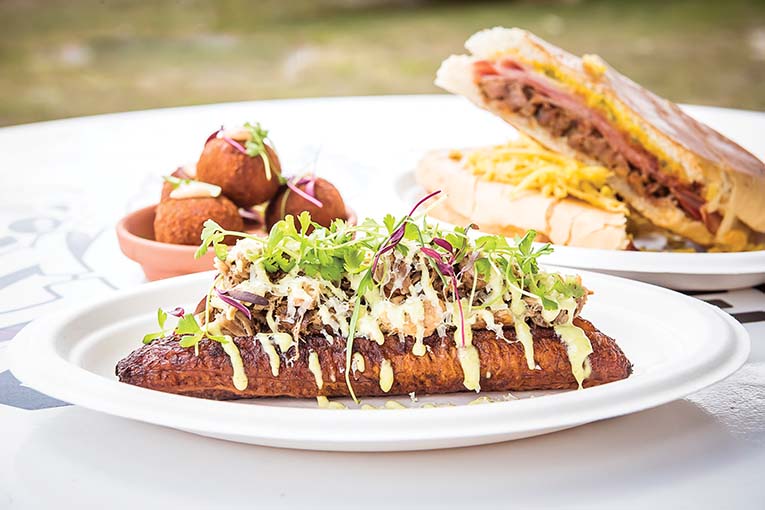 A selection of menu items from A Lo Cubano. (ROBERTO GONZALEZ)

With a five-year-old daughter and four-month-old son at home, Yojan Gonzalez and Lisa Plasencia roast the 180 pounds of pork they serve each week from their A Lo Cubano Kitchen food truck in shifts.

Pork is the star in many of their dishes. Marinated in mojo sauce and pulled to shreds, it nestles inside a whole plantain—which is coated in simple syrup and fried to a crisp—before it’s topped with pink-hued microgreens in their Plátano Tentacion dish. The same pork is smothered with Swiss cheese and layered with mustard, pickles and ham in the dense, crusty Cuban Sandwich. For their crispy pork belly dish, it’s doused with a coffee glaze.

The couple started A Lo Cubano Kitchen (“a lo Cubano” means “the Cuban way” in Spanish) shortly after moving from Miami to Orlando in 2014, because they couldn’t find Cuban cuisine with that “Miami twist,” which they define as modernized classic dishes from the island.

“Everywhere we went, the flavors were different. The way of cooking was different. We didn’t get the vibe that we were looking for,” says Gonzalez, who moved to Florida from Havana with his mother in 2006.

“We wanted that authentic Cuban, run by Cubans, made by Cubans,” adds Plasencia, who is Cuban-American from Miami.

Their signature dish is Croquetas, a meat fritter that’s a staple in Cuba. Gonzalez says they’re typically made with leftover meat and eaten at parties, as a snack and for breakfast with coffee. The couple’s twist is the different flavors they use—honey ham, smoked bacon, chorizo and manchego.

“We make so many that we can’t use leftovers anymore,” Gonzalez says with a laugh.

Another reimagined Cuban classic is their Queso Frito—white cheese fried to a crisp and served with homemade guava jam. It’s a fancy version of Timba, a popular Cuban snack of white cheese and guava paste on a cracker.

The eatery has more than 3,700 Instagram followers and more than 1,500 Facebook followers. In reviews, customers post about traveling from as far as Melbourne and Miami to visit the truck. They sold around 170 Cuban sandwiches each weekend they worked the fall festival at Southern Hill Farms in Clermont from Oct. 16-Nov. 8. They also won first place Reader’s Choice in Orlando magazine’s 2020 Dining Awards.

A Lo Cubano also serves as a connection to Cuban sodas that are hard to find here, such as Iron Beer, which is similar to root beer, and Jupina, a pineapple-flavored soda. They’re sweeter, fruitier and more intensely flavored than American sodas.

The couple’s plans to open a brick-and-mortar restaurant this year were derailed by the pandemic. They are currently eyeing locations throughout Central Florida and are hoping to settle in Orlando sometime next year. Asked why they want to make the move, Gonzalez jokes, “Because the truck is too hot!”

But seriously, they say putting down roots will provide better accessibility for their customers and more menu consistency. They frequently change the menu because of limited space in the truck. Currently, the best way to find out what they’ll be serving is through social media.

“We want everyone to get their Cuban on as much as possible,” Plasencia says.