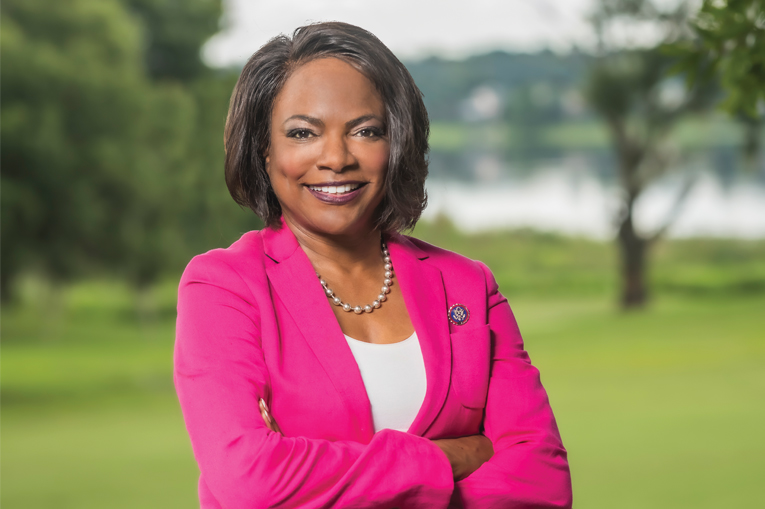 One question brings a free-flowing conversation with Rep. Val Demings to a pause. Seconds tick by. Silence. Her stare is steady, but her mind is clearly racing. “Wow!” she finally blurts. She refers to me by my first name, a nice touch for a politician—one that journalists would be loath to admit jolts their ego with dopamine. “I appreciate that question,” she says, “and I’ll answer this way.” That is to say, she answers a yes-no question without saying yes or no.

Do you want to be president?

That the question caught Demings offguard, especially considering how well she communicates her message and story, is surprising. But it shouldn’t have been. Demings, voted Orlando magazine’s 2021 Most Powerful Person in Central Florida, is a rising star in the Democratic Party. In fact, her star is shining so brightly that Demings made Joe Biden’s short list for vice president. Had she been selected, Demings today would be a soon-to-be-79-year-old’s heartbeat away from the Oval Office.

As it is, Demings, 64, currently represents Florida’s 10th congressional district in the House of Representatives, which is an impressive rung on the political ladder. Now she’s after the next rung: Demings is challenging Republican Marco Rubio for his U.S. Senate seat in the 2022 midterm elections. The decision came as Demings’ fellow Democrats pulled her in two intriguing directions—go after Rubio’s Senate seat or run for Florida governor to supplant Republican Ron DeSantis. 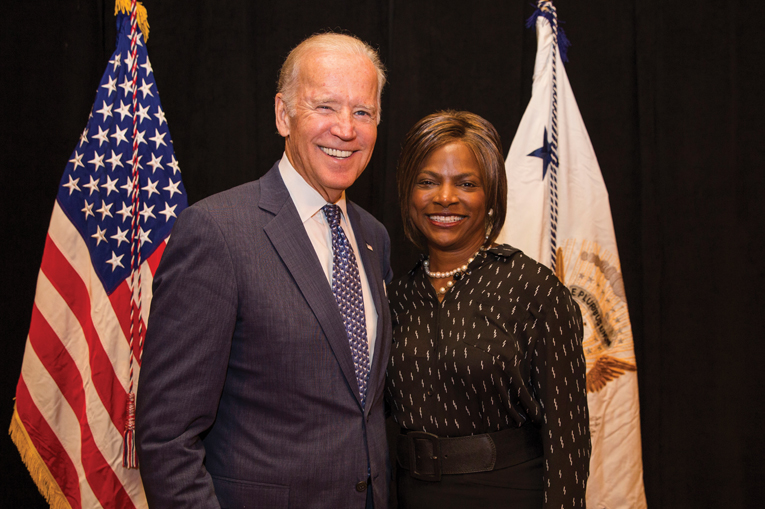 Just a little over one year ago, Demings was among four vice-presidential finalists considered to join the ticket with Joe Biden. Although she ultimately wasn’t selected, Demings is looking forward to her next political step—running for the U.S. Senate. COURTESY ORANGE COUNTY GOVERNMENT

It is a heady climb from the humblest of roots. Demings’ great-great grandparents were slaves, and her parents, Elouise and James Butler, were poverty poor in Jacksonville, raising seven children in a two-room house, with Valdez Venita Butler (her mother named her after a friend) being the youngest. Meager income came from her mother working as a maid and her father as a janitor and taxi driver. Demings was the first in her family to go to college, and that was hardly a given. She spent her first five years of public education in a segregated school. When she was 14, she worked as a dishwasher at a retirement home. At 16, she worked at a Dairy Queen and then at a McDonald’s, where she planned to work after high school.

But her mother saw something in her—a drive, an intelligence, an intangible something special destined for a better future than cleaning homes, hallways or flipping hamburgers. Her mother emphasized doing for others, and to “never tire” from doing so. She told Val to go to college and that they would find a way to pay for it. She did, applying and getting accepted to Florida State University. She earned a degree in criminology in 1979 and then wanted to go to law school, but she was broke. So she went to work as a social worker in her hometown of Jacksonville, immersing herself in one foster-child situation after another. Eventually, after 18 emotional and impactful months, she took her criminology degree and pursued a career in law enforcement.

In 1983, a 26-year-old Val Butler graduated from the police academy as class president and joined the Orlando Police Department. It was there she met a detective named Jerry Demings. They married in 1988, had three sons, and today have five grandchildren. Jerry Demings, currently the mayor of Orange County, became the OPD’s first black police chief in 1998. Nine years later, in 2007, Val Demings became the OPD’s first female police chief. She spent 27 years in law enforcement, but it is the four years between 2007 and 2011 that are most noteworthy, because it was during her tenure as police chief that Orlando’s violent crime rate plummeted. 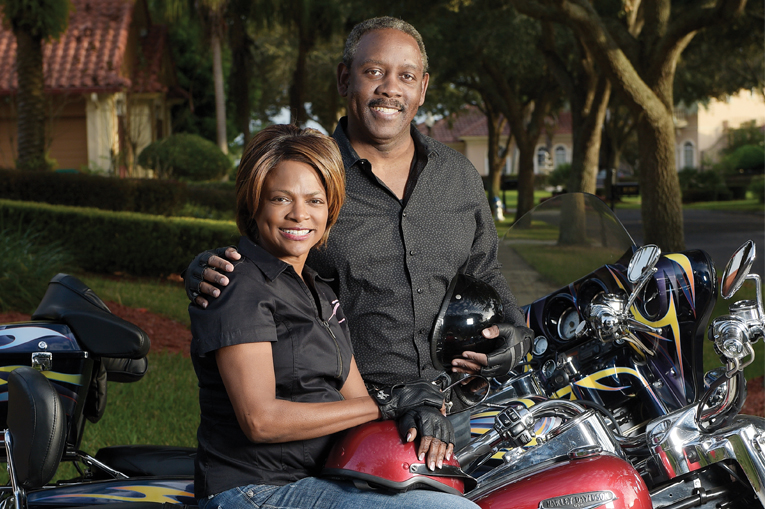 Demings employed an integration of social work and police work. “We started an initiative in a crime-ridden complex,” she says, “forming a partnership with the tenants to build a better relationship and address some of the quality-of-life issues plaguing the area.” At a community meeting, she invited residents to call her personal phone number if they were having a problem. One woman did. The problem was not the type that Demings was expecting to hear, but she listened.
“She told me her refrigerator had gone out and the management company at her complex did not seem interested or in a hurry to repair or replace it, and her food was spoiling. It had been three days. I thought it was shameful that there was so little regard for this mother and her four children, so I directed one of my deputy chiefs to have an officer go out there and not leave until the woman’s refrigerator was replaced or repaired. It was immediately.” Some believe Demings paid for the refrigerator, but she wouldn’t say. She did note this, however, “We started a GED program, built a playground, formed a tenants’ association, and used technology to improve overall safety and security. The relationship between the police and the tenants improved significantly and violent crime went down by over 30 percent.”

It came to be known as “The Fridge Factor.”

Says Demings: “Small investments can make all the difference.”

Her path to politics hit a few roadblocks in the early days. Demings first ran for Congress via Florida’s 10th congressional district in 2012, but narrowly lost to freshman Republican Daniel Webster. She then ran against incumbent Teresa Jacobs for mayor of Orange County in 2014, but dropped out. When redistricting made the 10th district substantially Democratic, Demings ran for it again in 2016 and won.

Now serving a second term, Demings captured national attention when she was selected as one of seven managers who presented the first impeachment case against then-President Donald Trump. Under the glare of an international spotlight, Demings was impressive—smart, detailed, articulate, passionate—more than holding her own against seasoned Republicans in what sometimes became fiery exchanges. So it wasn’t surprising when Biden short-listed her for his running mate. She wasn’t on just his radar, but also the national radar.

Fortune magazine and the Washington Post ran an opinion piece by Yale senior associate dean Jeffrey Sonnenfeld titled, “Why Val Demings is the perfect running mate for Joe Biden.” Sonnenfeld cited Demings as “a tough crime fighter” and “effective community problem solver.” He also noted a balanced and powerful piece Demings had written for the Washington Post in the aftermath of George Floyd’s death. It was titled, “My fellow brothers and sisters in blue, what the hell are you doing?” In the piece, Demings explained the importance of balancing law enforcement’s need to maintain power and authority with a community’s need for trust and safety.

Like moths to a bright light, the national media swarmed around Demings. She was on ABC’s “The View,” NBC’s “Late Night with Jimmy Fallon,” and CNN and other news outlets, to name just a few.

But it all nearly came to an end on Jan. 6, 2021, when a mob descended on and breached the U.S. Capitol as Congress counted electoral votes to confirm Biden’s presidential win. Demings says she was “expecting … to die that day.” She was taking selfies with fellow lawmakers in the House gallery when, as Demings says, “all hell broke loose.”

The Capitol Police burst into the House chambers, shouting, “Get down! Get down!” while passing out gas masks. Demings, flashing back to her 27 years in law enforcement, felt an awkwardness overtake her, “because I’m usually the one telling people to do that.” She saw terror on the faces of her colleagues, while others were trying to tell the Capitol Police what to do. She says she implored them: “Just listen! Just listen to them! No one knows this building better than the Capitol Police. We have to follow their instructions.” One of the instructions was to lie prone on the floor. As they did, her eyes met those of fellow Democratic Rep. Lisa Blunt Rochester of Delaware. The joy of the preceding moments evaporated amid the terrifying sounds of doors bursting open and glass shattering. “I thought there was a very good possibility we would die,” Demings recalls. “I didn’t think they were breaking the doors down to shake our hands and say, ‘Good job.’ ”

“Val, what is going to happen?” she says Blunt Rochester asked.

“I’m not sure what is going to happen,” Demings replied. “But one thing for sure is that if we die today, what we stand for and what we’re working for will not die with us. If we are who we say we are as a nation, then others will come in and certify those electoral votes declaring Joe Biden the president and Kamala Harris the vice president.” 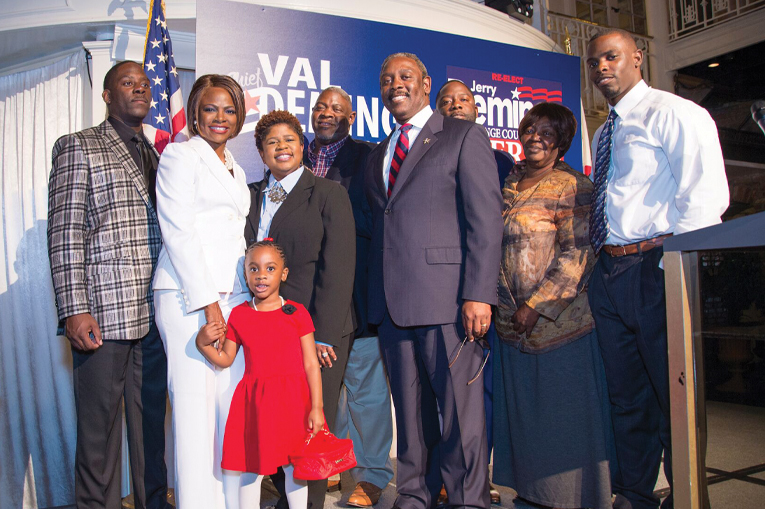 America knows the rest of that story, but Demings’ story is still being revealed.

“Let’s back up to 2016,” she says. “My girl [Hillary Clinton] did not win. But we bowed to the will of the people. I attended the inauguration of President Trump. People criticized me for doing that, but you know why I did it? Because I wanted to watch the peaceful transition of power. I felt it was my duty. What happened on January 6 was disgraceful, shameful, and I’ll say what I’ve said as a career law enforcement officer— everybody counts but everybody is accountable. The people responsible for that day should be, and must be, held accountable. Not just those who were there beating police officers with bats and poles and fire extinguishers and everything else they could get their hands on, but those who helped incite it have to be held accountable.”

Demings reflects on all the times she has taken an oath of office. “What I realized that day,” she says, “is why the oath includes ‘and domestic’ when it says we will support and defend the Constitution. This was not a foreign adversary attacking the center of who we are as a nation. This was a domestic act of terrorism. So while I’ve said and taken the oath, and believe in the oath, I never thought that would happen in the United States of America.”

She points to the congressional race she lost in 2012 and says, “I did not decide to march to the supervisor of elections’ office or to the Capitol in Tallahassee, or to the U.S. Capitol, God forbid. I bowed in humble submission to the will of the people.” She has also never blamed her loss on gender and/or race. She also doesn’t use moving target labels like “African American” and “person of color.” She simply refers to herself as “a Black woman.”

As she runs for the U.S. Senate to affect what goes on in the country, and not just in Florida, Demings brings a powerful personal and professional resume to the battle:

Put it all together and Demings is convinced she will win her Senate race against Rubio. And then? There is undeniable concern among Democrats that Biden, who turns 79 on Nov. 20, will be incapable of running again in 2024. And it’s no secret that Vice President Kamala Harris has hardly convinced the base she has what it takes to be elected to the highest office in the land.

This article appears in the October 2021 issue of Orlando Magazine.
Categories: News and Features
Tags: 50 Most Powerful, Leader on the move, politics and goverment, val demings
Want to read the whole issue? Download and read this issue and others on Magzter.