From cheese sandwiches to meatballs, these restaurants zero in on one culinary category—and produce some tasty variations on a theme.

With big box restaurant offerings spreading into mega-chaptered tomes, clever chefs are hyperfocusing on one-item specialties, attracting an enthusiastic and choice-weary audience. While we might not have places like London’s FishDog (fish finger sandwiches) or Chicago’s tuna noodle nirvana, Johnny Casserole, homegrown and national specialists are carving unique niches out of the Orlando dining landscape.

Owner Rafaela Cabede and her charming Brazilian staff serve up what looks like the largest portion of hash browns you’ve ever seen. It is in fact a rosti, a plate-sized, UFO-shaped Swiss delicacy called a batata Suíça in Brazil. At our own batataria, Mrs. Potato doesn’t sell only spuds, but the majority of the menu features baked, fried and shredded taters. Topped and stuffed with Brazilian beef jerky, pulled chicken, acres of melted cheese and Catupiry (ka-too-peer-ee, a brand of soft cheese called requeijão that was an obsession in the host country of the recent Olympics), each dish seems large enough to share with your party. But it’s easy to get selfish with a meal this good.

How many things can one do with chicken salad, you might ask. Enough to make it interesting. Founder Stacy Brown started her Alabama-based fast casual in her kitchen in 2007, and now has several dozen locations across the Southeast. Themed for feminine appeal (a sign in the men’s room says, “Tell her how beautiful she looks today”), the menu’s pared-down approach starts with a basic savory chicken salad recipe and leaps into several variants, including Olivia’s Old South (adding nuts, fruit, sweet pickles and egg), and and the eye-opening Kickin’ Kay Lynne with Buffalo sauce, bacon, cheddar, jalapeno peppers and ranch dressing. Every choice is picnic worthy. 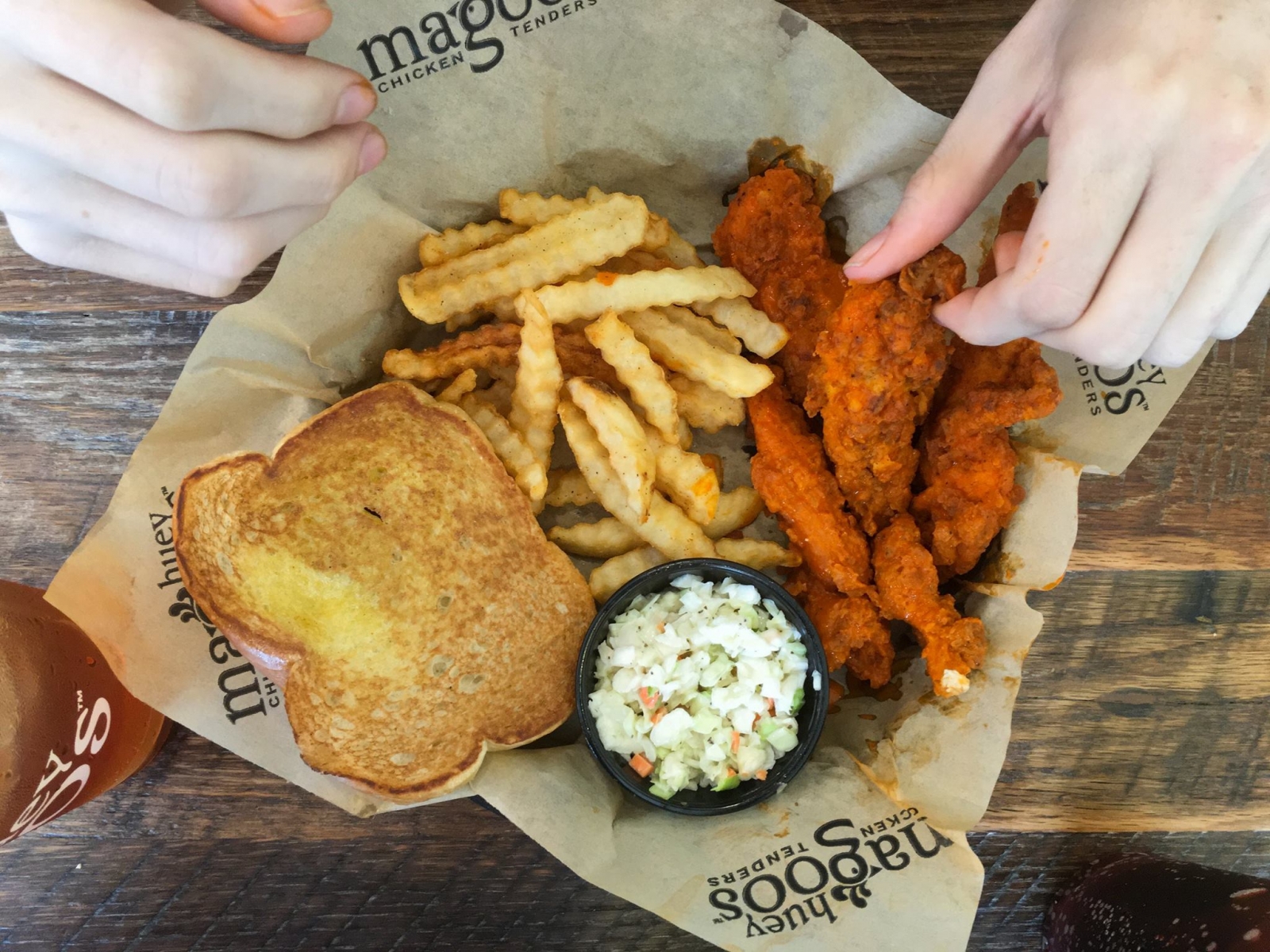 If there’s ever been a lunchtime place that crosses all age boundaries, it’s Huey Magoo’s. Based in Oviedo, this callback to chicken finger childhoods offers grilled or slightly spicy breaded and fried tenders on plates, or in sandwiches, wraps and salads. It’s an eating experience best described as “perky”; the young lady who took my order told me, “You’ve never had chicken like this—you’ll need new taste buds.” My existing taste buds were good enough to enjoy the hand-breaded chicken, enlivened by an assortment of house dips and decent crinkle-cut fries. “This is the best decision you could have made for lunch,” my new friend told me, and I have to say she might have been right. 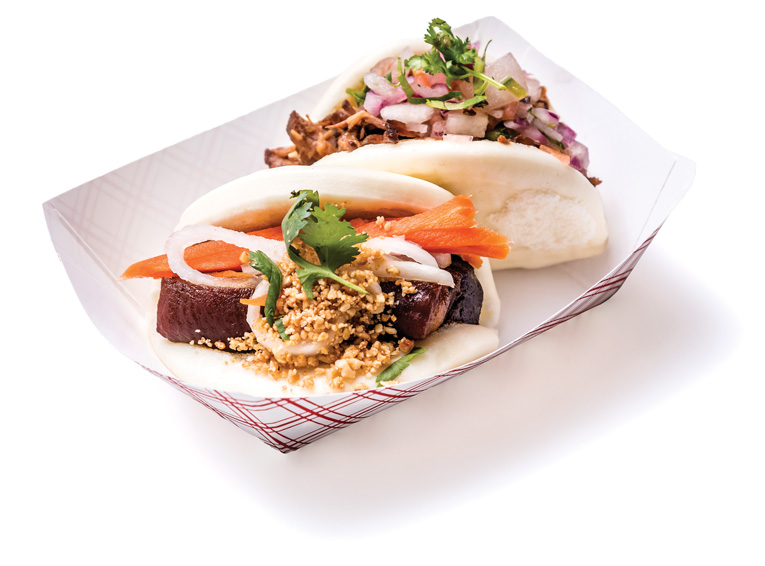 Soft steamed bao buns filled with an almost unending manner of things were developed in China and spread throughout Asia. Now, Orlando, like much of the country, is in the grip of a bao frenzy, and King Bao rules. Ranging from light and pillowy to sturdy chew-worthy rolls, the variety at the former Rahpsodic Bakery location is puffy enough to devour quickly and dense enough to hold superb pork belly, shrimp, kimchi fried chicken or even ice cream. Fascinating, thoughtful flavor combinations, like Asian pear salsa on the Glen Rhee Korean short rib, or shallot, pepper and ginger relish on tofu “Veganville” handhelds, emphasize the well-thought-out flavors. And much like nearby TakoCheena, the bargain is in multiples: three bao and a drink for $9 is hard deal to pass up. Take a bao. 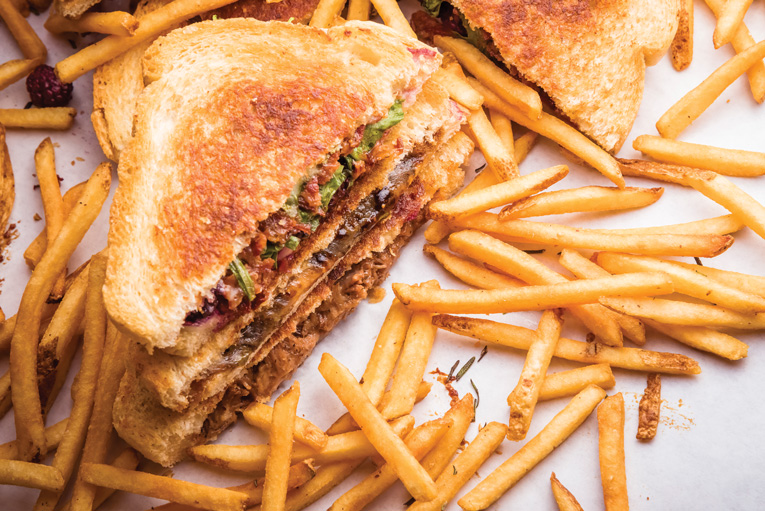 Born in Winter Park, Toasted is a marvel of design and taste. Any place that has a Periodic Table of Cheese on the wall (Sw—Swiss—atomic weight 23; Lb—Limburger—a hefty 38) is okay by me. Sandwiches like The Big Cheese, a mashup of cheddar, Swiss, Muenster and Jack cheeses and As Gouda As It Gets (smoked Gouda, roasted chicken, garlic and spinach) prove the universe of cheese flavors is almost infinite. For those looking for something slightly less cheesy, the burger menu offers several diverse choices, including a bahn mi turkey burger, and a superb bacon and blue cheese burger so surprisingly powerful it brought tears to my dining companion’s eyes. In a good way. 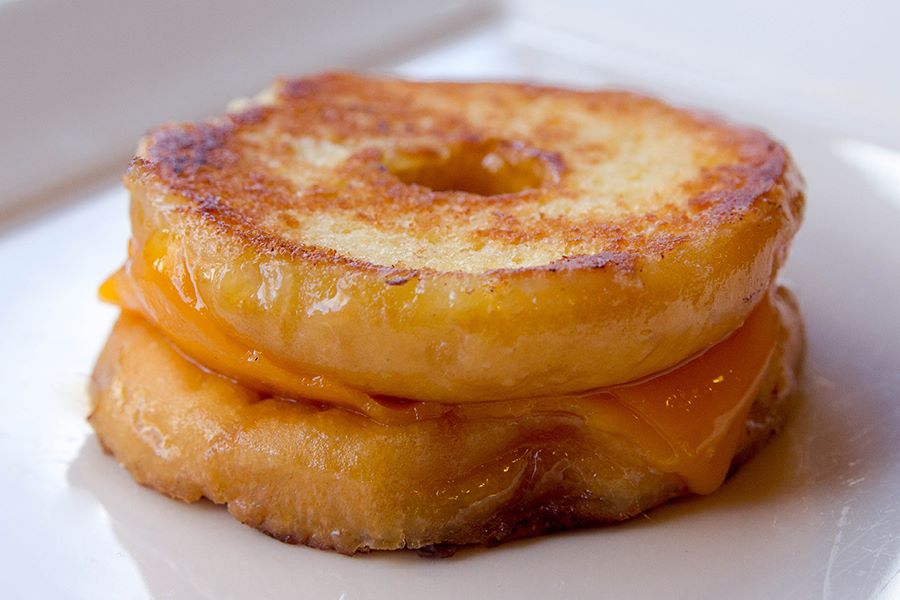 Another grilled cheese specialist, T+C burst onto the food scene after heavy exposure on ABC’s Shark Tank. The Cincinnati brand features a menu of “fancy” sandwiches like the Grilled Mac+Cheese (that’s right, a mac ’n cheese sandwich), Hippy+Chee (hummus, cucumber, cheddar and wheat berries) and my favorite, the Mint Summer’s Night—chocolate mint candy, chocolate mascarpone, strawberry and mozzarella on a grilled doughnut. The “Tom” part is three rich and flavorful tomato soups, completing a concept that would have your mom’s approval. Although possibly not the doughnut part. 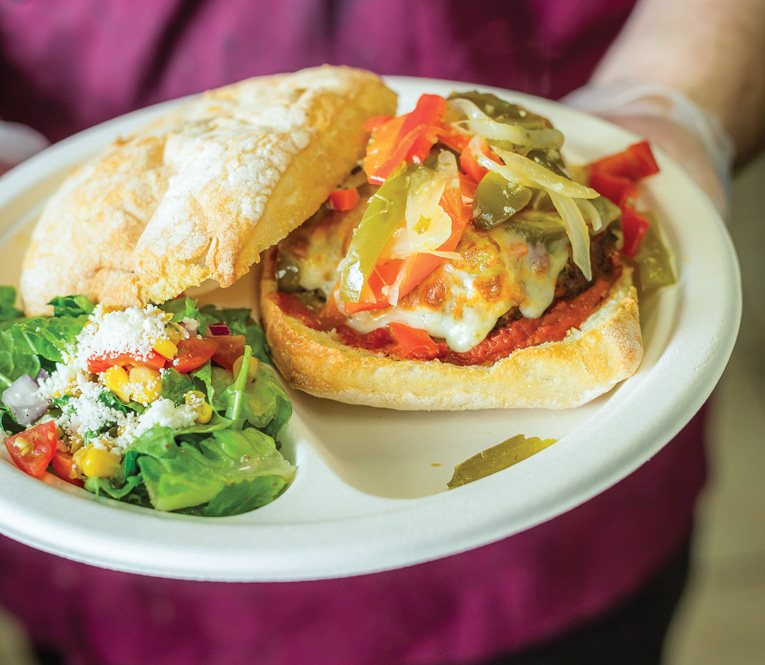