Chef José Andrés has brought the talents of his culinary team to Disney Springs. And the results—from a spread of ribeye and piquillo peppers to a half-dozen kinds of paella—are mouthwatering.

Chef José Andrés is no stranger to fame or success. Since coming to America from his home in northwestern Spain in 1991, he has built 20 restaurants in 30 locations, and received Michelin stars, James Beard awards, and the esteemed Order of Arts and Letters from the King of Spain. Teaching culinary physics at Harvard and a course called “World on a Plate” at George Washington University comes as easily as his five books and long-running PBS series, Made in Spain (along with two others). And you may be surprised to know that he was the “culinary consultant” for the TV show Hannibal—but alas, no dishes with fava beans at Jaleo, his new restaurant at Disney Springs.

One of Andrés’ latest endeavors, the Orlando Jaleo is the largest of five across the country, replacing the former Wolfgang Puck’s Grand Bistro with a modern tribute to tapas and Spanish cookery (Wolfgang moved 900 feet away to his new Bar and Grill). Jaleo’s bold splashes of red and yellow, a massive photo of a bullfighter’s suit of lights and a patio overlooking Lake Buena Vista make for an exciting space to enjoy the specialties of Andrés’ childhood. 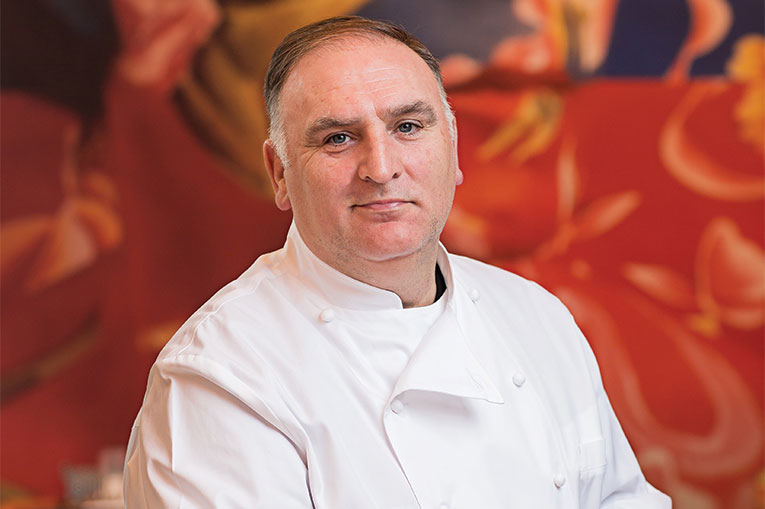 The restaurant is purely Spanish, timeless dishes worthy of sharing given a modern twist. Basque and Asturian cheeses; mini-burgers made from Ibérico pork and bacon (Ibérico de bellota, $9); and 45-day aged Angus ribeye served with wood-smoked Spanish piquillo peppers (chuletas de cordero, $40) are just some of the delights. Andrés makes sebiche from oysters doused in what is basically a gin and tonic ($18), or a remarkable dish of fire-roasted red peppers, eggplant and sweet onions (escalivada catalana, $9).

Of course, it wouldn’t be a José Andrés restaurant without aceitunas modernas y clásicas ($12), a famous product of José’s days at el Bulli with molecular gastronomy wizard Ferran Adrià. Olive juice is gelled with a variety of stabilizers to make a sphere that looks like the accompanying stuffed Gordal olives, but flows back to liquid at first bite.

Spanish chef Ramón Martínez met Andrés in 2004 at the Basque Culinary Center at the beginning of the latter’s trajectory as a television personality. Martínez was convinced to come to America, he says, “as a trial. I said I’ll try it for a year.” Fast forward fifteen years, he’s the culinary director for all Jaleo operations and essential in menu development.

“José is passionate about Spanish food,” says Martínez. “He always says there are two ways to do things—good, or bad, there’s no middle. It took him 10 years to get FDA approval to bring the real jamón Ibérico or puntallitas, the baby squid, to America, but he never gives up. His passion never stops.”

It’s those authentic ingredients that make Jaleo’s menu rise above most other tapas places in town. Jamón Ibérico, 36- to 48-month cured ham from free range, acorn-fed, black-footed Ibérico pigs found only in Spain, is carved tableside into paper-thin leaves ($38), or served with a small dollop of sturgeon caviar (José’s Taco $18).

Croquetas de pollo ($12) are labeled as “traditional chicken fritters” on the menu, and the  filling of these crisp little tubes of pulled chicken and bechamel is immediately recognizable—it’s the gold-rimmed red cushion they arrive on that causes a stir. But the story behind how the croquettes are made is even better.

“I wanted to see if there was any machine that could help us make it the way we do,” Martínez says. “It doesn’t work. It’s still handmade, how my grandmother used to make it.”

“We improve it every time we make them,” says Willy Ong, who has worked for Wolfgang Puck and in the Grand Floridian kitchens, as his hands rapidly transfer each thumb-sized piece from flour to egg to breadcrumbs, as many as 1,000 a day. There are easier ways, faster ways, cheaper ways of making little croquettes or dates wrapped with bacon, or stock distilled from whole chickens every morning. So why not do that?

“Because the quality is never the same,” Martínez says. “José is obsessed with quality: even if you use a machine instead of a knife to chop onions, it changes the dish.”

Jaleo couldn’t represent Spain without paella. Like Moroccan tagine and Indian tandoori, paella means both the meal and the pot it is cooked in. Andrés’ are a lesson in seasoning, the value of fine ingredients and traditional methods, cooked in massive pans in an enormous center-kitchen open wood-fire pit (with a ventilation system that may cost more than your house). There are usually five or six variants on the menu—not all available at all times—such as the archetypal paella Valenciana, savory short grain Calasparra rice cooked with chicken, rabbit, lima beans, green beans, and saffron. Versions with vegetables and mushrooms; chicken; shrimp and squid; and arroz a banda con bogavante with lobster, complete the rotation. The flavors meld together, yet sing separately; and all range between $25 and $38. Listen for pot banging and a shout of “PAELLA!” to know it’s ready.

After setting up the Disney Springs location, Martínez has left the kitchen in the able hands of Executive Chef Rodolfo Guzmán, who met Andrés in 1995 as a dishwasher at the D.C. Jaleo. “My first job in my whole life was Jaleo,” he says.

Some chefs have fame thrust upon them; some earn their reputations. José Andrés and Jaleo deserve their celebrity.

News of José Andrés humanitarian efforts with his not-for-profit NGO, World Central Kitchen—bringing food to disaster-torn Houston, Alabama, Cuba and Peru (not to mention aid to furloughed government workers during this year’s shutdown)—has garnered the attention of the James Beard Foundation and Nobel Prize committees alike. He has fed more people in Puerto Rico after Hurricane Maria than the Red Cross and Salvation Army combined, and once left in the middle of a Beard dinner to find a helicopter to travel to fire-ravaged California.