Find out how in the story below! 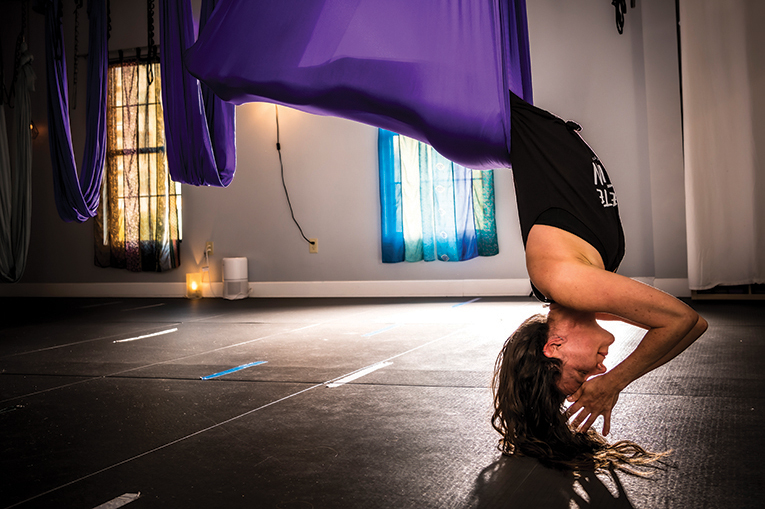 Elevate Yoga Center owner Bob Brant was all in when I asked if I could visit his studio to see aerial yoga in action and do some interviews for this story. But he doesn’t allow observers, he told me. In other words, this acrophobic grandma with an old back injury and an inability to relax would have to participate.

But first, Brant had to adjust my silk hammock. This required me to flip upside down (known as inverting) with my legs wrapped around the silks. He had to keep raising the hammock until my head cleared the ground as I was inverted. I was hanging upside down, and class hadn’t even started yet.

Class began with Kincade instructing us to lift our bodies into our hammocks until we each were enveloped in our hammock. Then, we put the soles of our feet together with our arms hanging out overhead and took several deep breaths. I noticed that, for the first time in my life, I felt completely relaxed.

Soon, we were using the silks with yoga moves, such as warrior pose, downward dog, and bow and arrow. By the end of class, I was inverting on my own with little fear of dropping head-first onto the floor. And even though the class with a real workout, especially for my upper body, I still managed to walk several miles that day and experienced no morning-after regrets.

The takeaway: If a grandma, albeit a physically active one, can do aerial yoga, virtually anyone can do it.

This article appears in the January 2022 issue of Orlando Magazine.
Categories: Health & Beauty, Home Page Features
Tags: aerial yoga, exercise, Yoga
Want to read the whole issue? Download and read this issue and others on Magzter.