Joseph Creech grew up a missionary’s son in Guadalajara and Acapulco (“I was a beach kid,” he says. “I hate the beach.”), and while the family moved to Central Florida when he was 6, he and his brother David still spent summers south of the border. In his college years Joseph moved back and fell in love with the street foods of Mexico City. The Creech boys bring those influences to Hunger Street Tacos with delectable tacos, quesadillas and tostadas that define the real Mexico. 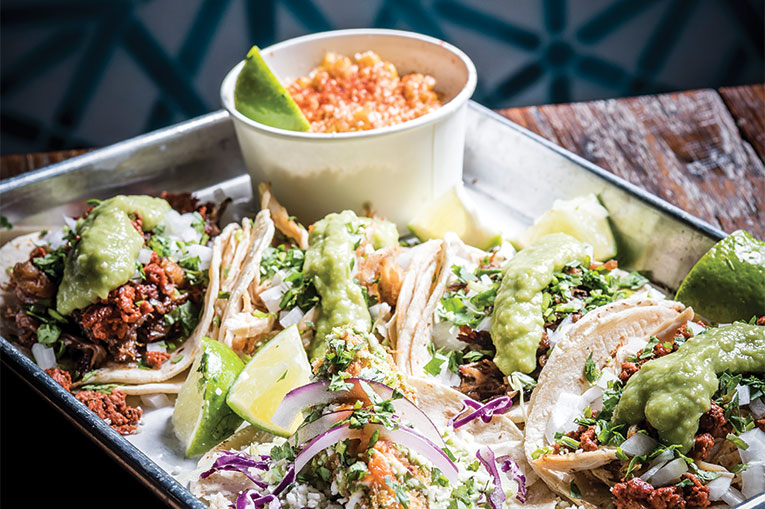 Creech calls the suadero (3.75) “the only taco native to Mexico City,” normally using a cut of beef not readily available in America. So here, marinated brisket is seared on a hot flattop before adding cilantro, lime and an avocado-tomatillo salsa that contrasts beautifully with the deep meat flavor.

Everything on the menu is vibrant and influenced by Mexican flavors. Sautéed hibiscus flower and guacamole ($3) is a most unusual combination of flavor and texture and “very big right now in Mexico City.” Two dishes that leap from classic to fusion are “Grilled Cheese” ($4), melding halloumi, refried beans, Serrano-lime salsa and mint; and a panko-fried avocado wedge ($3.75), served with shredded cabbage, pepper-lime crema and salty queso cotija from Michoacán.

The Creech brothers see authentic Mexican cuisine to be as sophisticated as any French kitchen, and bring a fervent passion to their remarkable food. The little setting that gave birth to the 4 Rivers empire might just be the lucky location of our next great food destination. 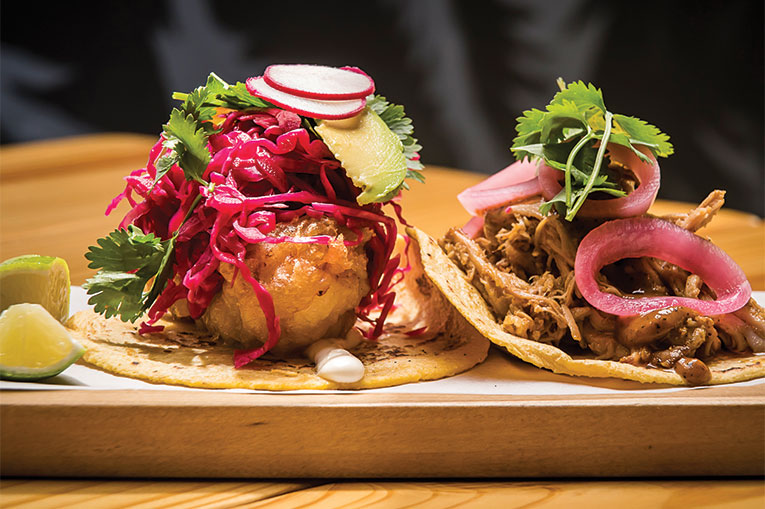 The exact origins of the taco are shrouded in legend, myth and outright fabrication. But just about everyone can agree what a traditional taco looks like. . .what goes inside in our pan-cultural fusion age is another matter.

Bartaco brings a South American flair. The chain, stretching from Connecticut to Colorado, is inspired by the beach culture of Brazil, Uruguay and Southern California and creates items such as chorizo, ancho-crusted tuna, tamarind-glazed duck and even falafel tacos. The Orlando location is on Dr. Phillips Boulevard, just off Restaurant Row. bartaco.com

We can’t neglect John Calloway of Black Rooster Taqueria, who won my Best Chef nod for Dining Awards 2017 by taking Mexican and Colombian influences and adding the skill of a very creative chef. The smoky achiote pork, slow cooked in a banana leaf for 36 hours and served on hand-made corn tortillas, is sublime. Mills 50 District. blackroostertaqueria.com

Herbert Tinjaca, former co-owner of the Kalbi Hau5 food truck, pulls the focus from grilled meats and brings a guacamole flair to the GUACAMOLI CO truck, with five styles of avocado spread including an amazing pomegranate variety. Tacos spotlight the guac and add chicken, beef barbacoa or tofu on fresh corn tortillas. guacamolico.com

It’s odd to think that a restaurant that opened in 2011 can be considered a veteran, but Tako Cheena came at the forefront of the “fusion” taco and still serves up Asian-marinated beef, char sui pork and Latin flavored mojo shrimp on generous tortillas. Mills 50 District. mytakocheena.com