Plant Street Market is home to more than a dozen culinary vendors who offer an eclectic mix ranging from wontons and chocolates to pretzels and brews.

In Communities like Seattle, Brooklyn, Columbia, S.C. and our own Audubon Park, collaborative markets have revitalized old neighborhoods and created “food hubs” brimming with local produce and purveyors. The building housing the new Plant Street Market in Winter Garden might look like another abandoned warehouse repurposed for the foodie good. But the impressive brick edifice and strong industrial lines of this 6,500-square-foot space were built from the ground up by three enterprising families with no prior experience at running a market. And it’s a beauty. 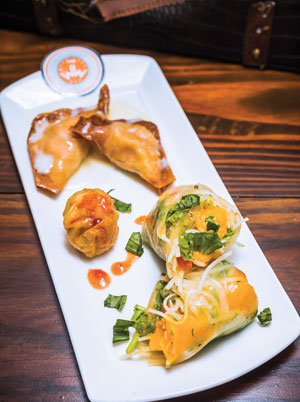 Opened in May by Jared Czachorowski (with a background in construction at Universal), local financial consultant Andy Sheeter and Culinary Institute of America graduate Robert Scott, the Plant Street Market is home to the massive Crooked Can Brewing Co., which is run by the three partners. Suzanne Scott, Robert’s wife, handles day-to-day operations of the rest of the property, harboring local food purveyors and craftspeople.

“After a group trip to Colorado,” Suzanne says, “the ‘boys’ got very excited by a visit to a craft brewery, and by the time we were back home they had a plan.” Once the former Shady Hills Apartments were demolished, the City of Winter Garden kicked in funds for sidewalks and parking, but the vast bulk of the development—to the tune of  $4.6 million according to Scott—came from the owners.

The brewery takes up one end, with a further expanse for as many as 25 vendors. (The non-food merchants offer items ranging from apparel to essential oils. ) The space is welcoming, open and very exciting. Axum Coffee, with a location on Plant Street near the Garden Theatre, wanted a site where they could actually roast their beans, and the massive roaster is a feature of their space here. Winter Garden Juice Bar moved from a much smaller location into the market. And a chance meeting at Publix led to the head butcher of Winter Park’s Meathouse opening The Local Butcher and Market as a sister company.

Collaboration extends not just to sharing space, but resources and product as well. The food counter at Five Thymes Five orders meats from The Local Butcher and Market; the butcher uses bread from Euro Bake World for their sandwiches; Crooked Can Brewing utilizes beans from Axum for its coffee stout.

Scott sees guests pooling resources as well. “Pick up bread from Bake World, some chicken salad from Market to Table, a bottle of Press’D juice… you have yourself a nice picnic.”

In July, Scott announced that a sushi counter would take over an underutilized wine bar, and afternoon teas, weekend yoga and beading classes are in the future, making the market a community space as well as a foodie destination.

AntiquiTEAs: Directly across from the Axum Coffee bar is a place for fresh brewed teas of a dizzying variety, from smoky lapsang souchong to invigorating herbals.

The Local Butcher and Market: Grass-fed and organic beef in cut-to-order servings, an in-house charcuterie selection and sliced-to-order sandwiches.

David Ramirez Chocolates: Orlando magazine Dining Hall of Famer Ramirez is creating interesting gelato and macaron flavors along with his gorgeous chocolates. $5 gets a sampler of five items, including gelato.

Euro Bake World: German pretzels, rye sourdough and Bavarian tarts from master baker Denny Gruendner, who has worked with bread since he was an 8-year-old in East Germany. The actual bakery ovens are above Hamburger Mary’s on Church Street.

Market to Table Cuisine: A veteran of Victoria & Albert’s, Chef Ryan Freelove makes those chef-y things like truffle butter and demi-glace available to the home chef.

The Pop Parlour: A staple of downtown Orlando that uses local, all-natural and organic ingredients in its fruity, creamy and “boozy’’ popsicles.

Press’D Juice Bar: Local, farm-fresh produce in a very seasonal selection of cold-pressed juice and smoothies, along with vegan wraps and snacks.