From seafood to fowl, the plates crafted by The Osprey Tavern’s Joseph Cournoyer-Burnett tell a story of delicious daring and creativity.

Every once in a very great while, a new restaurant comes along that offers food of such high quality that it creates a standard by which others might be judged. The Osprey Tavern in Baldwin Park is such a place.

The plates imagined and executed by Osprey’s chef de cuisine, Joseph Cournoyer-Burnett, are often challenging, familiar in unexpected ways, and daring without being, for lack of a better word, silly. He doesn’t combine ingredients for the sake of being trendy, yet manages to make dishes that are refreshing and new. 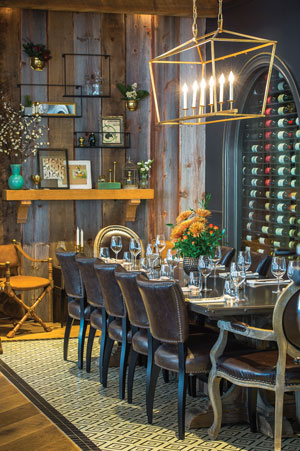 A section of the dazzling dining room

“We work on things that will please the average person,” he says, “and some things that might be scary.” Or unusual, at least. His use of borage, for example. Placed atop a dish of Texas quail ($25) the herb had a sharp, medicinal taste on its own that I thought off-putting in the presence of a spectacular bird that literally melts in the mouth. But combined with juices from the quail, bits of sweet corn, mushrooms and tomato, it created an irresistible gravy at the bottom of the pan.

Born in England, Burnett says he started his culinary career as a dishwasher at 15 in St. Petersburg, then went to school to study graphic design. But he found the grind unbearable and so, with no formal culinary training, introduced himself into the Miami kitchen of Norman Van Aken. In three years he had risen to chef de cuisine, which led to another six years at Norman’s in Orlando.

Van Aken recalls, “Joe led our in-house sausage and charcuterie program way before that became status quo elsewhere. He was very focused, quiet and on the road to success from the very beginning of his time with us.”

That road detoured into hotel hospitality, but he was lured back by the groundbreaking Ravenous Pig (Burnett’s wife went to the Culinary Institute of America with Pig owner Julie Petrakis). After three years as chef de cuisine at the Winter Park restaurant, Burnett finally heeded the call of his own kitchen. “It was time to stand on my own,” he says.

Seven months after taking over the kitchen at Osprey, he says he’s “still getting started.” If this is the beginning, I want to be around when he hits his stride. A striking figure in his leather and canvas apron, Burnett truly is an “executive” chef, guiding the kitchen team, including Sous Chef Elek Kovacs (also of Ravenous Pig and Norman’s), in the fine details of every dish, finding the story on the plate.

Co-owners Jason and Sue Chin also have the successful Seito Sushi across the street, and Osprey was styled and designed by Sue. The superb room is not a restaurant pretending to be in a big city, but an open and inviting big city restaurant. Sectioned into booths, tables and a central bar, sightlines flow from the massive windows right to the open kitchen area, to the marble-topped bar level with surrounding seating.

Behind the serving counter where Burnett checks every plate is “The Josper,” a Spanish wood oven that burns Florida oak to 900 degrees and imparts an earthy flavor to practically everything. “This can cook a 32-ounce ribeye in 12 minutes,” Burnett says. “It’s the original microwave.”

Plump peel-and-eat shrimp ($14) come out of The Josper so tantalizingly charred that I ate them shell and all, peeling be damned. You might be tempted to bypass the accompanying “comeback sauce” with shrimp this good, but you’d be missing a 16-ingredient masterpiece blending chili sauce, Worcestershire, curry powder and a host of other flavors that should be bottled for sale.

The blistering oven creates superb seafood. I was so impressed by the Florida black grouper ($27), crisp and charred on the skin and remarkably moist within, perched atop gnocchi made from Anson Mills corn and a medley of squash, that I avoided ordering a grouper dish the next night, fearing it would suffer in comparison.

Burnett admits to being cerebral in his cooking, carrying a small notebook in his pocket to record inspiration for dishes and ingredients. “The menu is a living thing,” he says, and it will change as ingredients and whim allow.

The kitchen seems to occupy as much acreage as the dining room, the visible area backed up by yet another kitchen behind. “This is a Ferrari,” he says of his domain. “It’s the best I’ve worked in.”

Burnett takes cues from his travels to Mexico and India, culinary traditions that favor a multitude of flavors. “Food is what I always remember,” he says. In Burnett, we are in the presence of a true chef, one whose thoughtful, carefully crafted dishes make you think, explore, discuss and, most of all, enjoy.

Months after eating at Osprey Tavern, I still remember the food, as will you.

Pastry Chef Kristy Carlucci honed her craft at Cask & Larder and The Greenbrier in West Virginia. She’s been given free rein at Osprey to create whimsies like the Peas and Carrots dessert, chunks of robust carrot and pea shoot cakes, served with burnt butter ice cream. It shouldn’t be delicious but it is. The pastry trolley on hand during brunch is a rolling wagon of temptation.