I don’t think I’ve ever written about a restaurant that needs less introduction than Emeril’s.

The two-story steel and stone eatery at Universal CityWalk opened in 1999, a worthy counterpart of the flagship restaurant on Tchoupitoulas Street in New Orleans and the biggest name in the entertainment/dining arcade.

As for Emeril, the chef… everybody knows Emeril Lagasse. Since opening his first namesake restaurant in 1990 and launching the Essence of Emeril Food Network series in 1994, the chef, philanthropist, TV personality and drummer has added to his mononymous name a dozen restaurants, 18 cookbooks and several catchphrases I don’t even need to remind you of.

Locally, Lagasse is owner and executive chef of Emeril’s as well as Tchoup Chop at the Royal Pacific Resort. Like most celebrity chefs, he started his career by being innovative and adventurous in the kitchen; unlike some who have built culinary empires while leaving the kitchen behind, he’s still a kickass chef who takes pride in what his properties offer, and he hires the best for when he’s not in-house. 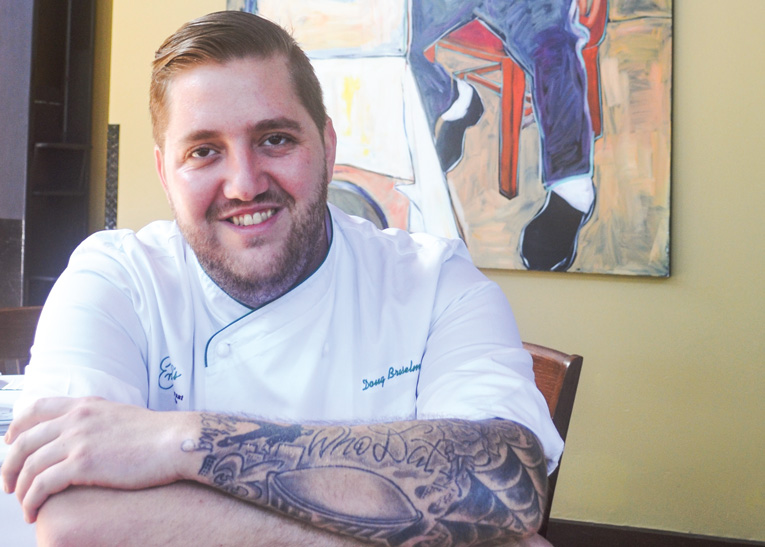 Chef Douglas Braselman, Emeril’s resident chef de cuisine, arrived in Orlando in 2015, and the menu he helped devise reflects the mix of French, Spanish, African, Vietnamese and purely Louisianan influences that make up the cultural gumbo of New Orleans.

“It’s all represented on the plate,” Braselman says. “Instead of a turkey burger for lunch, we give you a shrimp po’boy.” Which includes Leidenheimer bread and Zapp’s potato chips imported from the Pelican State. The Gulf shrimp is quickly fried and served “dressed,” as they say in New Orleans, with lettuce, onion, tomato, pickles and mayo, the toothy bread a great contrast to hearty shrimp so fresh it still has its own snap ($16). The like-minded fish sandwich ($15) is an enormous serving of beautifully crusted Okeechobee catfish that rivals NOLA’s Parkway Bakery or Domilise’s. Braselman has also been known to make a surf-and- turf combo of rich, slow-roasted beef and fried shrimp that is a masterpiece—ask if it’s available.

Distinctive, taste-of-New Orleans starters include a roasted chicken and andouille sausage gumbo ($8) that has enough heft and spice within its dark roux base to make a meal, and shrimp and mirliton soup ($8), plump shellfish in a spiced tomato broth with chunks of chayote squash.

The season dictates the fish at this kitchen, but the preparation of redfish, drum or other seasonal beauties in an andouille sausage crust ($36) is worth ordering regardless of the catch, served atop a mound of shoestring potatoes and dressed in a lemon butter meunière sauce. Grilled bone-in pork chops in a Latin American sweet-sour tamarind glaze ($32) shows the versatility of the kitchen, the tender chops basted in a chili, pistachio and poblano pepper mole.

The life-changing banana cream pie ($10) has already held a special place in our February Sweets issue and, if anything, gets better every time.

The restaurant occupies a corner lot of CityWalk, down the hill from Cowfish and just before Margaritaville. A multi-story main space and mix of industrial and hardwood stylings make for an open and echoey space, while the enclosed patio offers a bit more quiet and unmatched tourist-watching. A chef’s table option is available, with the multi-course, wine-paired dinner served in the kitchen. The hovering second story houses a 10,000-bottle wine cellar and a cigar room. Two hours of free parking is offered to lunch guests, and CityWalk parking is free to Florida residents after 6 p.m.

Chef Braselman is a son of New Orleans, generations of his family having lived and cooked in the city’s Eighth and Ninth Wards. It doesn’t get more hardcore N’awlins than that. Braselman grew up in the cool shade of his grandfather’s bar, and started cooking at the legendary Trey Yuen Chinese restaurant in Mandeville just across Lake Pontchartrain.

“I never strayed from culinary,” he says. “I tried other things—butcher, baker—but the kitchen was always calling.” He went to work for James Beard Award winner Susan Spicer (whom I adore) and the famed Brennan family before joining the Emeril’s team in 2010. He brings his Crescent City sensibilities with him and an eye toward reviving an image that had gone slightly askew. “I think it may have gotten away from its roots,” he says of the Orlando restaurant. “Not necessarily the New Orleans, or New New Orleans style. But just because we’re in the middle of two theme parks and dealing with thousands of visitors a day doesn’t mean we should abandon our ways.”

There is a specific character to chefs from New Orleans, a generosity of spirit and camaraderie that shows in a ready laugh and an easy confidence on the plate, and it lives here between the parks. If you used to go to Emeril’s, go back. If you’ve never been, let Chef Braselman show you what good food is like in Emeril’s parish.

Emeril Lagasse has become a champion of the Florida culinary environment. Along with his appearance at the Dr. Phillips Center in April, where he talked about his life and work with our own John Rivers, his Cooking Channel show, Emeril’s Florida, has joyously spotlighted four seasons of the Sunshine State’s treasures. Our own COOP, Prato, Sushi Pop, Capa, K, Cress, The Ravenous Pig, Two Chefs, Luma and many more have been featured, and most with an eye toward their commitment to local and sustainable product.