‘Cue the Plants: Vegan Barbecue is a Thing in Central Florida

It’s no secret that Orlando is home to many of the world’s best attractions as well as a diverse culinary culture. One dining hidden gem that’s finally getting its due praise is Orlando’s vegan food scene. The eats go far beyond salads and açaí bowls. We’re talking about plant-based options that could even sway the heart of the most devout barbecue purist. 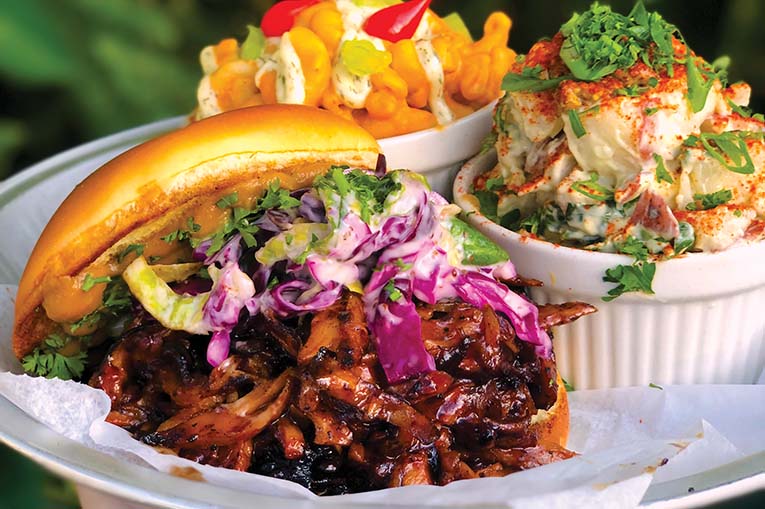 When exploring Orlando plant-based barbecue options, start by sampling fare with a Southern twang from Dharma Fine Vittles. Who needs meat when you can have jackfruit? Known by many vegan food enthusiasts as “the fruit that can save the world,” jackfruit mimics the texture of pulled pork when seasoned and slow-cooked in barbecue sauce. The culinary wizards at Dharma Fine Vittles take vegan barbecue to new heights with two sandwiches. Guests can choose the Carolina BBQ Pulled Jackfruit or my personal favorite, The Orange Bird. Their version of a sloppy joe is topped with slaw and served open-face on a toasted potato bun with slow-roasted garlic spread. Extra napkins aren’t just encouraged; they’re a must.

Next, head to 4Rivers Smokehouse, which serves up a vegan take on its wildly popular Burnt Ends sandwich. Enjoy a large portion of Beyond Meat that is smoked in a sweet and spicy sauce, slow-roasted until caramelized, and then sandwiched between two pillow-soft buns. Pro Tip: Dip the crinkle fries into the vegan 4R Signature BBQ Sauce for the perfect decadent side.

Suddenly in the mood for ‘cue? 4Rivers Smokehouse and Dharma Fine Vittles have multiple locations in Central Florida with dine-in, pickup and delivery options.