We’re hopelessly trapped between morning and afternoon—and loving it. Here are some local best bets for the popular repast.

Orlando is packed with happy hours, late-night specials and lunch deals. But the big draw for the dining-out crowd these days is brunch, a mid-morning/afternoon concept that Smithsonian Magazine tracks to the late 19th century, old enough to have fallen in and out of favor too many times to count.

From taco brunch in parking lots to high-end carving stations alongside hotel swimming pools, the combination of eggs and everything under the sun has captured our taste buds. There’s even an amateur baseball team called the Orlando Brunch. Here’s some help keeping up with the new midday treats.

Lots of eatin’ and drinkin’ at Homecomin’ with a new weekend menu of Smith’s Southern delights. From cheddar cheese drop biscuits to short rib hash, shrimp and grits, and fried green tomatoes with country ham and eggs, Smith defines a hearty breakfast. “We reinvented the Benedict,” he told me, “by creating cakes from our hush puppy batter instead of using English muffins as the base and then we added pimento to the hollandaise.” Fried chicken and sugar donuts are a must (waffles are so passé), as are an order of mini-doughnuts coated with pecans and bacon bits or Chef Art’s Church Lady Deviled Eggs. The morning cocktail crowd can sample the Southern Mary, with tomato vodka, smoked bacon, fried green tomato and pimento cheese-stuffed olives, or try the white peach moscato sangria. Sat. and Sun., 10 a.m.-2 p.m.; homecominkitchen.com 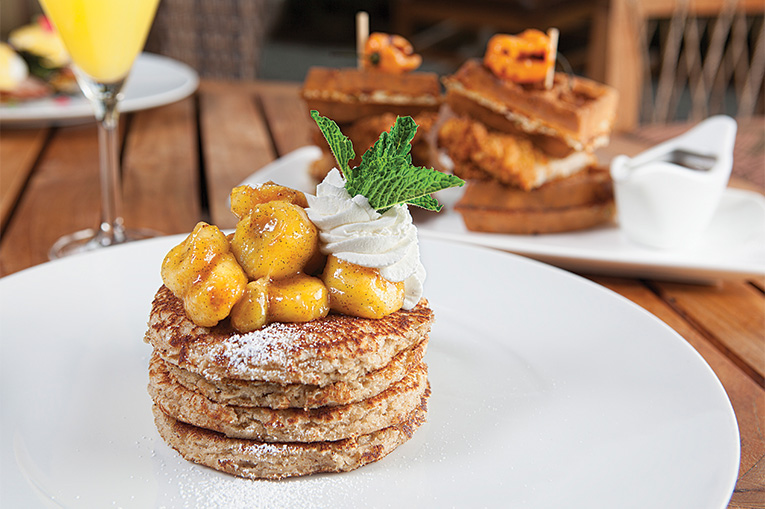 Here are some other enticing brunch offers:

(a la carte unless price is noted)

Orange County Brewers had a change of food offerings this summer. Switching from Orlando Pizza and Wing Co. to lobster rolls and pizza via Red Claw, its weekly “beer and lobster brunch” now features wild game, sausage or lobster pies and three types of rolls, along with $5 “Beermosas.” Sun., 11:30 a.m.-4 p.m.; theocbrewers.com

One overlooked brunch spot is Plancha, adjacent to the Tranquilo Golf Club at the Four Seasons Resort Orlando at Walt Disney World Resort. Open to more than just course duffers, the Cuban-style restaurant is an undiscovered treasure: The three-course brunch menu includes a choice of entrée surrounded by appetizer and dessert buffets, along with bottomless mimosas and Bloody Marys. $68 adults, $20 children. Sun., 10 a.m.-3 p.m.; fourseasons.com/Orlando

Café Linger, the latest eatery to fill the NYPD Pizza location in College Park, offers a Continentally accented brunch  that includes the ubiquitous avocado toast, ricotta pancakes with house-made jam,  a “Madame Linger” sandwich combo of ham, Swiss and an egg in a basket, or steak and eggs. Sun., 10 a.m.-4 p.m.; cafelinger.com