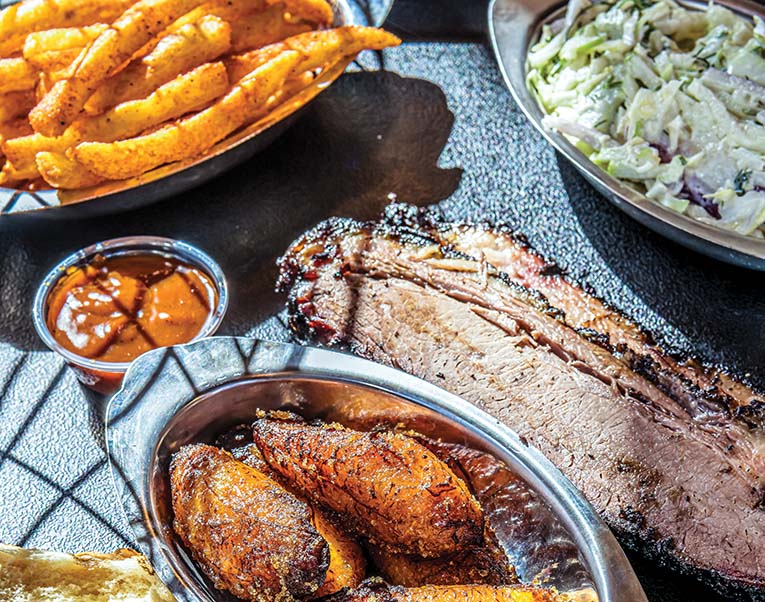 Barbecue, accompanied by our favorite side dishes,  has been a dine-in and takeout go-to for decades. In recent years, global and plant-based trends have nudged traditional barbecue sides like baked beans and creamy coleslaw to the back burner, making room for exciting new options. Caramelized maduros, crispy Brussels sprouts, new twists on sauces and tempting desserts now elevate the local barbecue experience.

When Thomas Ward opened Pig Floyd’s Urban Barbakoa in the Mills 50 District seven years ago, he took barbecue to the next level with flavor profiles that deviated from the norm.

“Palates have changed over the years, and there’s a lot more international food available. It’s important to provide those different enhanced flavors that are popular worldwide,” Ward says.

To complement barbecue staples like ribs and slow-smoked brisket, Ward’s team got creative with unexpected sides like yucca frita with “fancy sauce” and outside-the-BBQ-box tacos such as pork belly topped with citrus peanut slaw. Main-dish accompaniments including caramelized maduros and apple-fennel slaw with an apple cider vinegar/mayo base, served atop the Plain Jane Pulled Pork sandwich, have been hits. Sandwiches arrive on fresh coconut pineapple rolls that add unexpected (and addictive) flavor elements to every bite. Other unexpected sides include black beans with white rice and deep-fried tofu.

Pig Floyd’s sauces bring sweet, spicy and fusion flair to every plate, from its chimichurri and honey sriracha to a hot sauce with Korean chili powder. 407-203-0866; pigfloyds.com

Oak-smoked meats, inventive side dishes, and donuts for every palate effect a dreamy trifecta at Smoke & Donuts, a joint venture by Ian and Juliana Russell. “From a culinary standpoint, sweet and savory together make sense. It’s magic!” says Chef Ian, whose classical training at New York’s Culinary Institute of America (CIA) informs the menu’s sides, including roasted and smashed potatoes with lemon-garlic gremolata and brisket burnt ends.

Creamy Florida red potatoes elevate beautifully with a zesty boost. “That’s where gremolata, a classic Italian sauce, comes in,” Russell says. “It’s bright and herbaceous to give the potatoes a lift.” His crunchy red and green cabbage slaw with cucumber, candy-red radish and red onion in a sherry and rice-wine vinaigrette is a light, tangy complement to the meat. Mac ‘n cheese, just added to the menu, comes in a vegetarian option and a “fried-like-an-omelet” pitmaster version inspired by a ham and cheese crepe he once tasted in Paris. It features that “crunchy fried cheese flavor” with pulled pork, scallions and caramelized sweet onions.

Donut desserts come in glazes of bourbon & maple, candied lemonade, peanut butter and more, with toppings that include Heath bar, chocolate chips, sprinkles, brisket burnt ends and sea salt. Sliders have a sweet-savory kick—vanilla-glazed donuts packed with brisket or pork and a toasted guajillo or guava quince sauce. Find all of this and more at Smoke & Donuts’ food truck at À La Cart street food and beer garden pavilion Monday-Thursday 407-476-1591; or plan to pick up at Smoke & Donuts To-Go production kitchen located in College Park, Friday and Saturday, 5-9:30 p.m., 321-352-7070.; smokeanddonuts.com 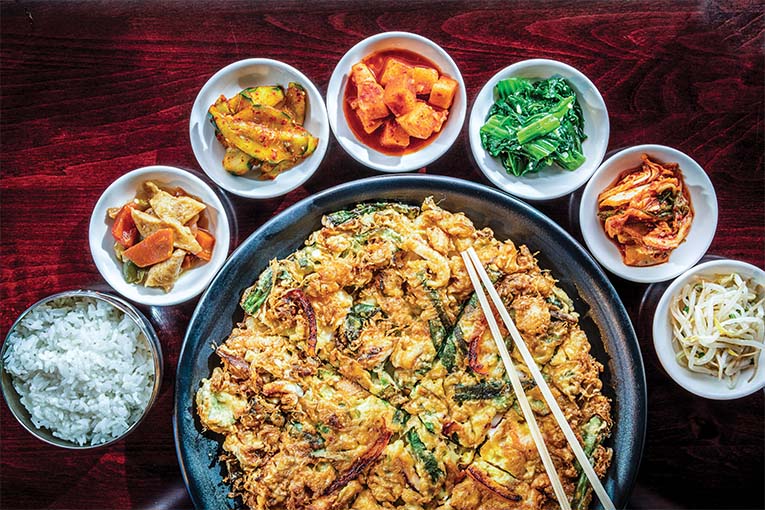 The haemul-pajeon pancake and accompaniments from Korea House. (ROBERTO GONZALEZ)

At The Polite Pig in Disney Springs, Chef/Owners James and Julie Petrakis do offer baked beans and creamy mac ‘n cheese for guests who want to stick to tradition, but their menu of side dishes is so plant-friendly that guests who favor veggies often go for the “choose 3 sides” option.

“Disney wanted a bit healthier menu, and they knew I had the farm-to-table background and experience doing interesting things with vegetables,” says James, who met his wife, Julie, during their chef training at CIA. The couple’s Winter Park restaurant, The Ravenous Pig, hosts legions of regulars.

Roasted beets with goat cheese, smoked pecan granola, yogurt and oranges; BBQ cauliflower with paprika sour cream and candied pepitas; grilled street corn with chipotle aioli; and crispy Brussels sprouts with a whiskey caramel glaze are delicious on their own or as complements to a full array of entrees.

One of Petrakis’ favorite lunch combos is the smoked cedar plank salmon with maple-Dijon glaze, a side of beets, and the tomato and watermelon salad with feta, mint, and pickled watermelon rind. His smoked turkey paired with grilled street corn is another favorite. Petrakis says the bright veggies cut through the smoke to cleanse the palate, giving diners a chance to make the most of their meat or fish.

These traditional Korean barbecue accompaniments, unfamiliar to many, “are like little amuse-bouche dishes and come with every barbecue order—it’s healthy to get vegetables and rice with your meal.” 407-896-5994, Orlando; and 407-767-5918, Longwood; koreahouseorlando.com 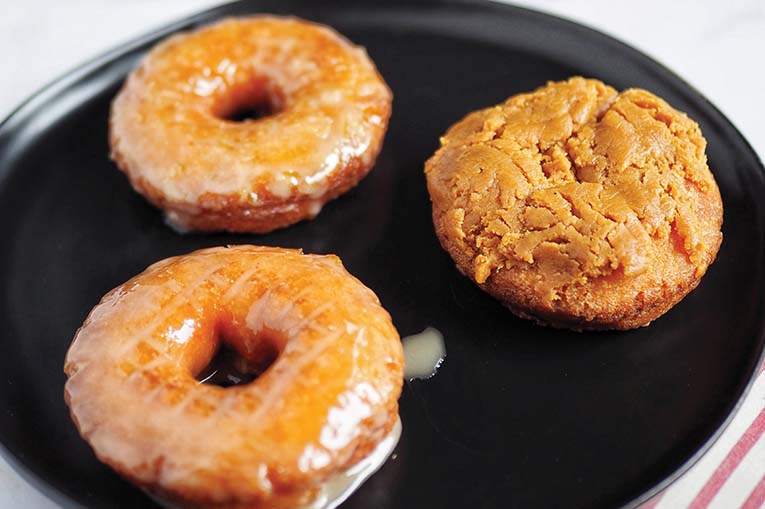 Many barbecue restaurants have upped their dessert game for diners who need a sweet finish. At 4Rivers Smokehouse, the Crispy Cream Bread Pudding made with Krispy Kreme doughnuts, raisins and a house-made glaze assures a happy ending. The 4Rivers Sweet Shop is known for baked goods. Pig Floyd’s offers seasonal desserts and, of course, house-made donuts soothe the sweet tooth at Smoke & Donuts. At The Polite Pig, you can have your bourbon chocolate chip cookie or your red velvet cake, and eat it, too.

Expect even more surprises in the ‘cue revolution as pitmasters rise to the challenge.

“The barbecue tradition has been evolving over the years due to the fact that all these flavor profiles are popular in mainstream cooking,” Thomas Ward says, “and channels like Food Network have made our taste buds in America evolve.”