During his years growing up in Apopka, Jason Chin’s relationship with Mexican food was formed in the small taquerias nearby, often found attached to a grocery store or gas station.

The food was made with lower-quality ingredients, mostly because customers demanded it be inexpensive, Chin says. As an adult who lives for food, he says Orlando deserves better.

“Mexican food is a gift to our civilization. It’s one of our great global cuisines,” says Chin, owner of Reyes Mezcaleria in downtown Orlando’s North Quarter District.

He says he opened the restaurant in May 2017 with the intention of serving food that would “improve our culinary landscape. It has to challenge people so they feel like they’ve learned something. It has to improve our city.”

To meet the neighborhood’s needs, Chin says Reyes had to be nice, but not too upscale, to build a base of regulars. He also knows to be daring with the food but to keep the menu stocked with familiar dishes to establish comfort and trust.

“Then comes the exciting part of them putting their guard down and trying something new.” He referenced the chapulines, or grasshoppers, that Reyes serves with their mezcal flights. “I mean, people are eating bugs!”

Six to 10 new dishes will be added to the menu over the next year. Chin says their seafood offerings are what makes Reyes shine, such as the shrimp aguachile—a common Mexican dish.

“I definitely have a lot in store for the restaurant,” he says.  *  North Orange Avenue north of Colonial Drive, uptown Orlando, reyesmex.com —Megan Stokes

Tamarind has captured the Best Indian cuisine category among readers for four straight years. Perhaps it has to do with Chef/Owner Amit Kumar’s fabulous spice blends, which are slow-roasted in an oven for two days and then burst with flavor in dishes ranging from the familiar Chicken Tikka to the vegetarian tadka dal (yellow lentils with tomatoes and onions). Tamarind’s menu also allows diners to choose a meat—chicken, lamb, shrimp or grouper—to pair with a sauce. The latter range from hyderabadi (curry sauce made with sesame seeds, coconut, peanut, tamarind and red chili) to roganjosh (fennel-flavored mild curry with curd). And the dosa is a wonder to behold—a crepe filled with potatoes and vegetables. * Lee Road and Highway 17-92 in Winter Park; East Colonial Drive near UCF. tamarindfl.com —Barry Glenn

For Wendy Lopez, the most honest, relaxed conversations happen in the kitchen. That’s where her family, which emigrated from Mexico when Lopez was 6 years old, spent time together—in the kitchen and around the table.

“In my culture, food is always the center of life. Every day, everything surrounded what we were having for dinner,” she says.

Lopez hails from a long line of professional chefs, including her father, who owned a family restaurant. She grew up entertaining customers and learning the inner workings of the food business. When she was home, she’d watch her mother spend hours making dinner. That training comes in handy in her job as executive chef at I-Drive’s Tapa Toro.

Lopez cooks for a 250-seat restaurant and makes everything from scratch, just like her mother did. “It is doable,” she says. One dish she learned from her mother is mole, a smoky, spicy sauce made from chili peppers, chocolate and nuts. She used to watch her mother grind the peppers and listen to stories about how Lopez's grandmother made the sauce.

As much as she likes to think of herself as a back-of-the-house person, Lopez is most at home in Tapa Toro’s Paella Pit, where customers can watch chefs prepare custom-made paella. This, she says, is her signature dish.

“We can cook 12 different paellas at a time. It’s a little overwhelming. You have to be sure not to burn something, not to burn yourself and keep the conversation going. Adrenaline gives me energy. For me, it’s a positive thing.” *   I-Drive 360 in front of Coca-Cola Orlando Eye, International Drive, tapatoro.restaurant —M.S. 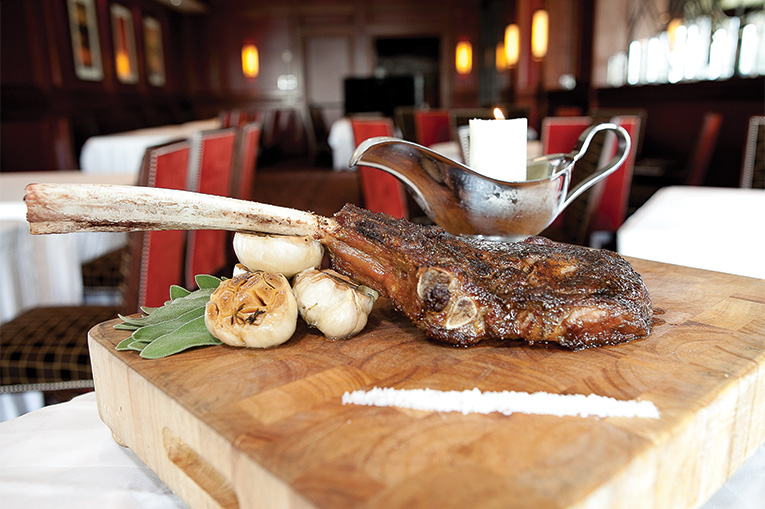 Nearly half of Waldorf Astoria Orlando’s Bull & Bear restaurant guests come from outside of the hotel, which Food and Beverage Director Jonathan Raz attributes to its staff’s undivided attention to each diner.

A team of four servers is assigned to no more than three tables at a time, creating whatever environment the guest wants, whether it be to marvel at the elaborate house-made bread presentation, have a culinary learning experience from their dining captain or get a more fast-paced service for a business dinner.

Raz says Bull & Bear has earned a reputation for protecting the anonymity of their guests, from the major celebrities who dine there to the business elite who close deals there.

“These superstars can be in our restaurant all the time but no one will ever know it,” he says. “In that spirit, our business guests, they’re experiencing that same feeling.”

Despite the upscale air, there's no stated dress code at Bull & Bear. Guests who don’t have reservations can opt for lounge or bar dining.

Maxine’s has won the Best Neighborhood Restaurant category three of the past four years, and if there were a Most Neighborly award, owners Kirt and Maxine Earhart would no doubt capture that one too. The welcoming atmosphere of this Colonialtown spot is enhanced by Chef George Vogelbacher’s creations, including Lobster Ravioli, Skillet Lasagne and Chicken Maxine’s. Plus there’s live music from the likes of guitarists John Gallagher and Drew Yardis (as well as Maxine herself), and a popular weekend brunch. Best Kept Secret? Consider the secret out. * Shine Avenue just south of Livingston Street. maxinesonshine.com —B.G. 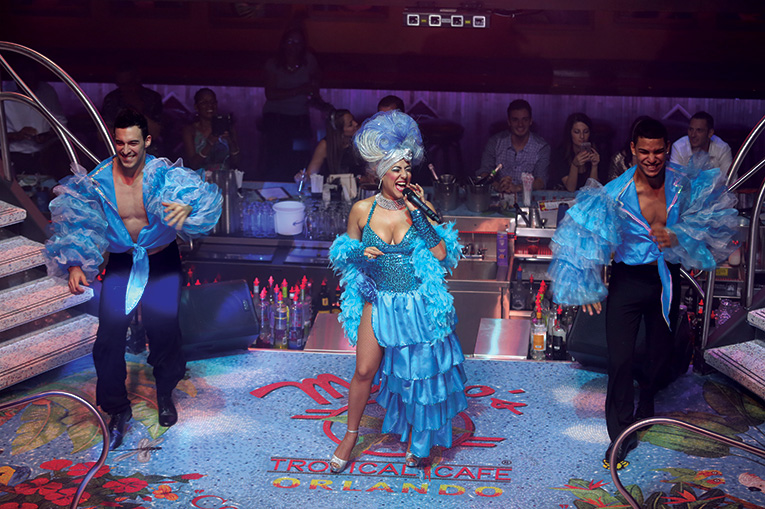 This is the perfect place to go if you have a large party that wants to…well, party! We’re talking a dinner show featuring a smorgasbord of colorful singers, dancers (yes, you too), a live band, and tributes to artists ranging from Bruno Mars to Selena to Michael Jackson. And don’t forget the coconut mojitos. * International Drive south of Sand Lake Road. mangos.com —B.G.