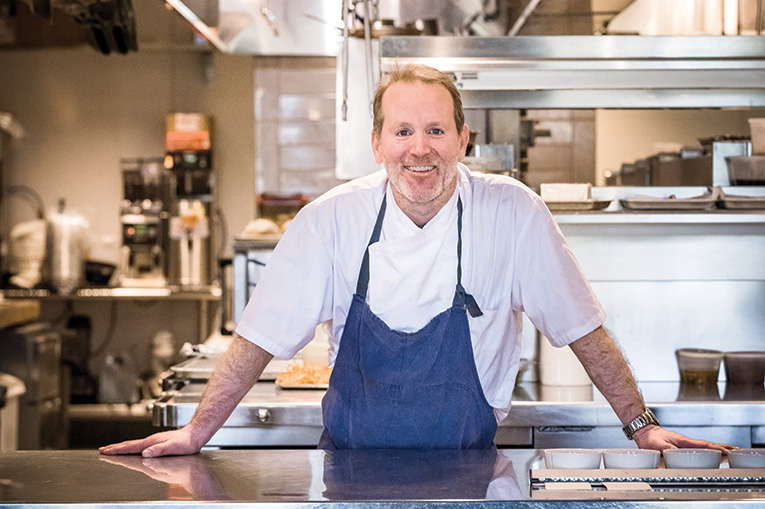 The Best Restaurant category is a tricky one, encompassing many variables: the atmosphere, the décor, the service, the chef, the food, those elusive somethings that define your reaction from that first step through the door. And DoveCote has it all, prime among its riches the artistry of award-winning chef and co-owner Clayton Miller (above) and business partner Gene Zimmerman, the wine and craft cocktail wizard of downtown’s Courtesy Bar.

Miller’s cooking cred stems from years working with and for Norman Van Aken, Daniel Boulud, Floyd Cardoz and Thomas Keller. It is maintained by the consistently superb creations of the DoveCote kitchen that range from a killer onion soup and magnificent chicken pâté, to dishes such as short ribs and grilled chicken whose exacting technique belies their simplicity.

“The menu is a living, breathing entity,” says Zimmerman of the upscale yet relaxed concept of DoveCote. “The idea of a brasserie appeals to a broad palate. And we’ve only scratched the surface.” In Zimmerman’s domain, the wine selection is a personalized curation that pares champagnes, French and American wines and fascinating cocktails (a rye, Cognac, Benedictine, vermouth and bitters Vieux Carre, anyone?) down to the essentials. The Klimt and Miro inspired décor, designed by scenic artist Drew White at Lot 1433 (who also designed The Courtesy), reflects a timelessness that would have fit in 19th-century Paris and is on point right now.

Zimmerman points to a recent partnership with Foxtail Coffee Co. as an example of DoveCote’s evolution. Foxtail took over the breakfast and coffee kiosk on the Bank of America lobby side, while DoveCote will provide food for several of the rapidly expanding Foxtail’s new locations.

“We want to appeal to our audience by being true to what we do, creatively,” Zimmerman says, “and offering what we know people will love. We are a restaurant for Orlando.” * Bank of America building, downtown Orlando, dovecoteorlando.com —Joseph Hayes

Joseph Creech is an evangelist for true Mexican cuisine. He and his brother, David, treasure the antojitos sold from Mexico City markets, bicycle carts and street stalls—small dishes that locals devour three times a day—and they fill their minuscule Winter Park taqueria with the familiar and the unusual. “This is the food we grew up eating in Acapulco and Mexico City,” Creech says. “Octopus, tuna tostadas, grilled snapper. We recently started making a tlacoyo, like a Mexican calzone, a thick corn flour sopa stuffed with chickpeas. It sells out every time we make it.”

Hunger Street makes good use of its tiny surroundings, the building that housed the first 4 Rivers Smokehouse location. Like John Rivers before them, the number of people who line up every day proves that quality of food more than makes up for a lack of dining space and linen napkins. And when you are serving items like sautéed hibiscus, bone marrow and grilled halloumi along with brisket, chorizo and guacamole, it had better be executed perfectly. Which is what Hunger Street does.

“2018 is phenomenal,” Creech says. “We were busier this past January than we were in December, and December was great.” Plans include an expansion of their catering business, with consulting help from local chefs such as Bruno Fonseca (Millenia 106) and Albert DeSue (Yuki Hana).

“The biggest lesson we’ve learned,” Creech says, “is that if we are faithful to tradition, people will love it.” * West Fairbanks Avenue, Winter Park, hungerstreettacos.com —J.H. 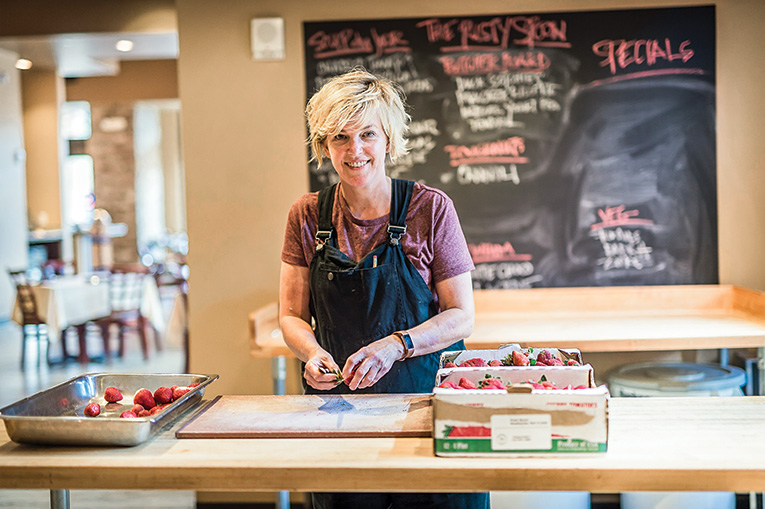 Kathleen Blake is a four-time James Beard Award nominee, a veteran of the Beard House kitchen, and a member of Orlando magazine’s Dining Hall of Fame. Her restaurant, The Rusty Spoon, is the model that all restaurants proclaiming themselves “local and seasonal”—and supremely good—should strive toward.

A champion of local farmers and fishers, Blake is also a steady presence at the many charity events that fuel Orlando’s nonprofit scene. “Somebody calls and says they need something,” she says, “I usually say yes. That’s what we’re supposed to do.”

Blake began her Orlando career as chef de cuisine at Melissa Kelly’s Primo in 2003, opening The Rusty Spoon in 2011. At the forefront of the movement to encourage women chefs, the dinner she organized at Lake Meadow Naturals in March, Women in the Kitchen, included such luminaries as Kelly, Melissa Khoury, Jody Adams and Elizabeth Falkner, a national network of extraordinary chefs that finds Blake at its center, where she shone as brightly as anyone.

But she remains as humble as her Iowan roots allow. “I feel like I do a darn good job, and I work hard at it every single day,” Blake says. At her restaurant, she takes pride in serving seafood only from Florida waters, and savvy diners choose her famous “55” burger stuffed with bacon and Gruyère cheese or the “Lake Meadow” salad of greens, eggs and chicken livers from Lake Meadow Naturals farm.

“I want to do more,” she says.” I always feel like there’s something I haven’t done yet.” * Church Street, downtown Orlando, therustyspoon.com —J.H.

Sure, it looks like (and is) a butcher shop, so old-fashioned a concept that it should be spelled “shoppe.” But like the retro rebirth of vinyl and Viewmasters, hands-on butchery is hot, and Orlando Meats is among the hottest. A much-discussed highlight is lunch (breakfast, too). Not wasting anything, including influences from the 1950s, potato chips are fried in beef tallow. The menu includes a fried turkey bologna sandwich (with yellow mustard on white bread); and beef, meatloaf and burgers are roasted, baked or ground on premises. * Mills 50 District, orlandomeats.com —J.H. 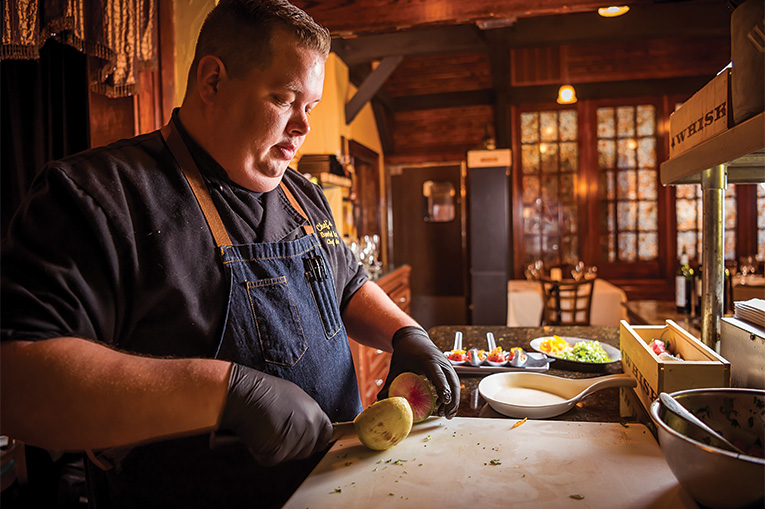 Chef’s Table at the Edgewater

Honestly, I’ve wanted to sign over the category permanently to Kevin and Laurie Tarter’s Winter Garden restaurant, so indelibly intertwined with the name over the past decade that it is the first restaurant that comes to mind. Chef de Cuisine David Lampman came to Chef’s Table in 2009 and is now the main hand in the kitchen, executing Tarter’s culinary vision with plates of lowcountry perloo, New Orleans-influenced fish, and fork-tender osso buco. * Plant Street, downtown Winter Garden, chefstableattheedgewater.com —J.H.

When asked about the progress of 1921 by Norman Van Aken since its opening in 2016, the eponymous James Beard Award-winning chef responded, “I’ve got a lot to say about that, but the first three words are … Rock and Roll!!!” Garnering national attention for (formerly) sleepy Mount Dora may have been a calculated side effect, but the main objective of 1921 is the food, a paean to Florida fulfilled daily by prodigy chef Camilo Velasco and irresistible treats from pastry wizard Gloriann Rivera. With a seasonally changing menu spotlighting produce from farms mere minutes from the front door, local lamb and Florida octopus, 1921 delves into the internationally flavored stewpot that is Florida cuisine. “What is so nice is the ongoing warm welcome [wife] Janet and I get from the people who live in Mount Dora,” Van Aken adds. * Fourth Avenue, downtown Mount Dora, 1921nva.com —J.H. 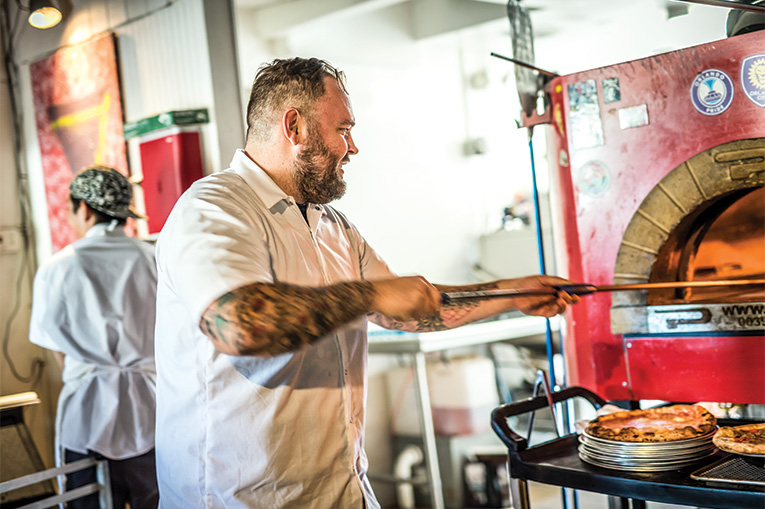 The rush to check out “the new place” is over, and now Pizza Bruno is noisily packed with the folks who really want to be there. And there are a lot of them. Perhaps it’s the presence of live flame from the wood-fired ovens. Chef/owner Bruno Zacchini explains, “We let the space create itself. Nothing would matter if the food wasn’t great, so the food is the focus.” He knows something about risk (he comes from a long line of circus performers), and took it with a rambling neighborhood joint that turns out the epitome of Neapolitan pizza and has attracted attention internationally. “Keep it relaxed,” he says. “Keep it friendly, keep it honest.” * Curry Ford Road, pizzabrunofl.com —J.H. 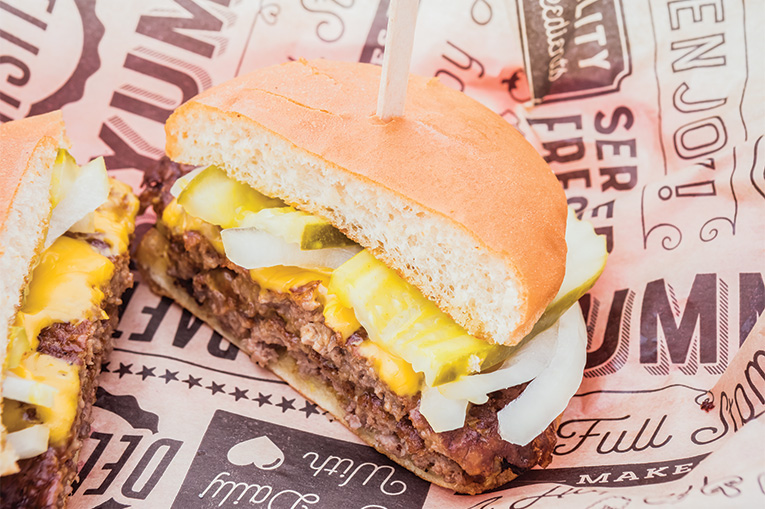 It’s been almost a year since the Burger Battle extravaganza, and I still remember the excellence of the Original Double that won the Judge’s Choice for best. Like a throwback to old-school Steak 'n Shake, Freddy’s (and there is an actual, 93-year-old Freddy) is just pure and simple skinny burger on a toasted bun. And the frozen custard is pretty damn good too. Yes, Freddy’s is a 300-store chain, but each manager considers the store his or her own, and it shows. * Three Orlando-area locations, freddysusa.com —J.H.

For the 2016 Dining Awards, my Critic’s Pick for Best Chef was Joseph Burnett, then of The Osprey Tavern. I mentioned his thought-provoking and memorable use of flavors, and I frequented the restaurant as often as my schedule would allow. And by 2017, Chef Burnett had left Osprey, searching to carve out a domain of his own. That he is now creating casual masterpieces at The Deli Downtown in Winter Garden seems to have escaped notice, but the sandwiches, soups and salads crafted by Burnett reveal once again his mastery of taste. Except for a small selection of Boar’s Head meats, everything that can be made by hand is, from condiments to cookies. The (my) award-winning Buffalo chicken sandwich might seem ordinary on paper, but the combination of tender beer-braised chicken, fragrant Marbleu blue Monterey Jack cheese, house-pickled celery and house-made ranch and Buffalo sauce distills the essence of Buffalo wings into a handheld delight (and I don’t even like Buffalo wings). Crisp and hearty ciabatta rolls from Winter Garden’s Pane D’Or are a smoky platform for a market tomato and fresh fior di latte Caprese with the perfect touch of balsamic. Jack fruit and whiskey BBQ sauce; carved roast beef and horseradish; pulled pork and Oaxaca cheese are all perfect touches that make good use of Chef’s palate. The Deli Downtown is a small treasure that should not remain undiscovered. * North Boyd Street, just off Plant Street, downtown Winter Garden, thedelidowntownwg.com —J.H. 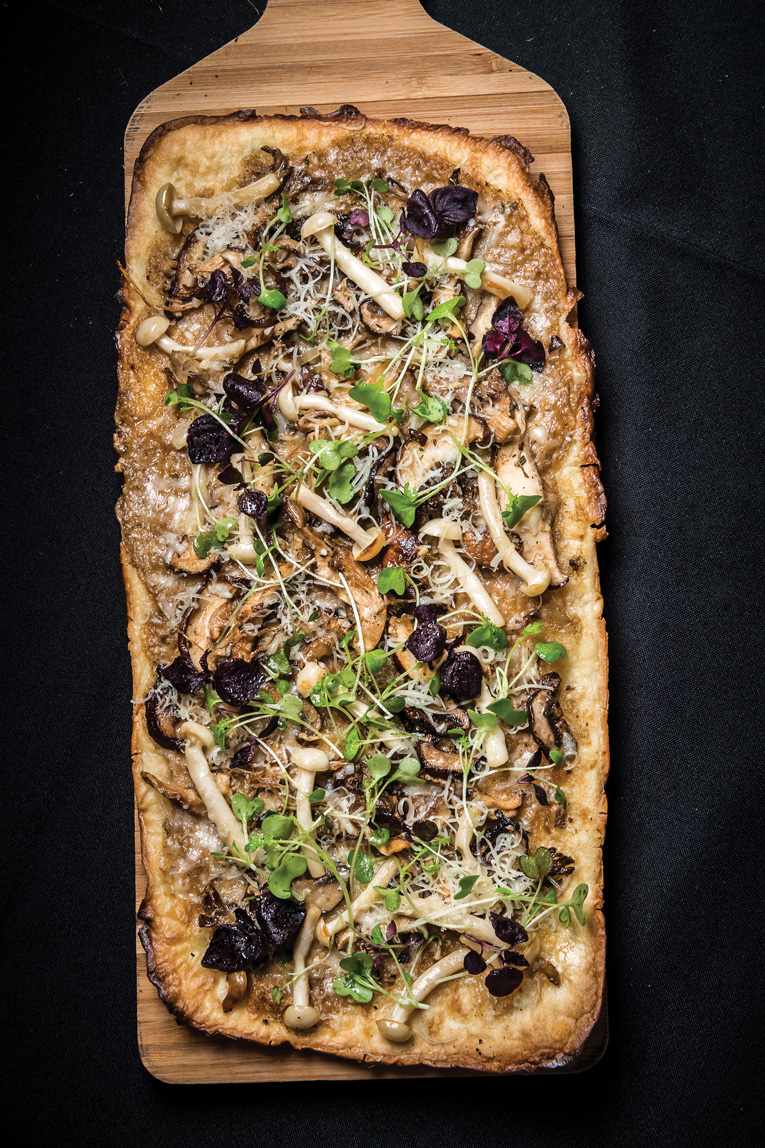 The American brasserie that is Urbain 40 continues its exploration of the culinary melting pot under the tutelage of master chef Tim Keating. With accents of French, Mediterranean, Asian and most definitely American fare, the menu is peppered with togarashi-scented calamari, red Argentine shrimp risotto and Angus Delmonico ribeye. “Some things you don’t want to change,” Keating says of his seasonal menu. “We’ll always have great steaks, we’ll always have a salmon dish.” And they’ll always have a casually elegant and unquestionably entertaining atmosphere. * Restaurant Row, Sand Lake Road, urbain40.com —J.H. 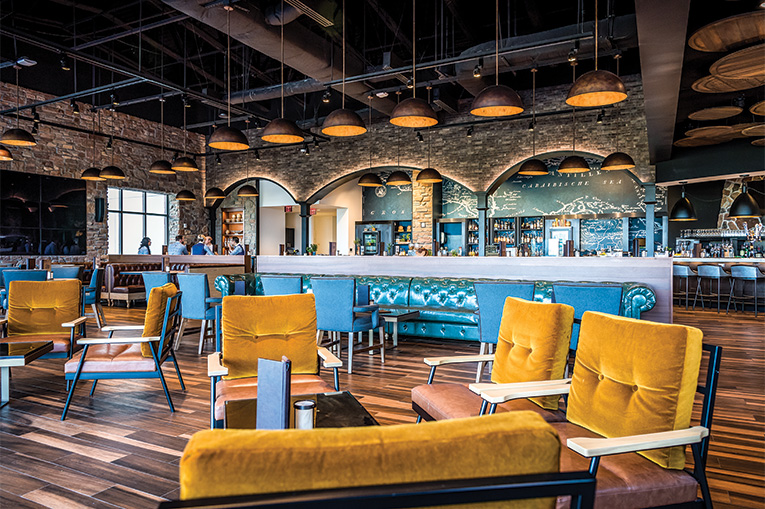 Strong Water could also win awards for Best Kept Secret, Atmosphere, Hotel and Neighborhood Restaurant (if you live in the Universal neighborhood). The tropical tavern is one of those places that, once found, is rarely forgotten. Submerged in its identity as the Sapphire Falls Resort’s “lounge bar,” Strong Water offers an enthusiastically tropical menu crafted by Chef Carlos Castaño, with highlights of Caribbean ceviches, Jamaican curry goat, Mexican tamales and 75 different types of rum. Add it to your Best Place to Bring Company list, too. * Universal Orlando Resort, loewshotels.com/sapphire-falls-resort/dining/lounges —J.H.