In celebration of Orlando magazine’s 70th anniversary, we catch up with four previous inductees into our Dining Hall of Fame. 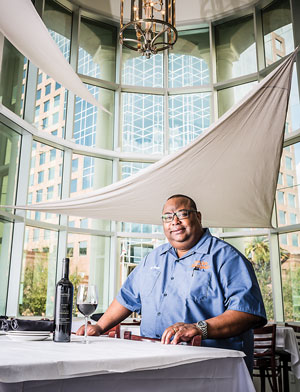 When Chef Bernard Carmouche was inducted into the Hall of Fame in 2004, he had been cooking for Emeril Lagasse in Florida and New Orleans for close to a decade. As Emeril’s culinary director, he had an influential hand in what made Emeril’s Orlando at Universal Citywalk and Tchoup Chop at the Royal Pacific Resort successful. But in the back of his mind, Carmouche wanted to “spread my wings and move on.”

Raised in Uptown New Orleans, on the east bank of the Mississippi, the young Carmouche washed dishes at the legendary Commander’s Palace and learned home cooking and the art of lagniappe, the little something extra, from his family and neighbors. Leaving the Emeril’s organization in 2014, Carmouche partnered with fellow chef  Larry Sinibaldi to open Two Chefs Seafood, and the unpretentious kitchen in the North Quarter area celebrated its first anniversary in April. “We’d been talking about opening a nice, small neighborhood joint for five years,” Carmouche says. “I always wanted a friendly open bar, like you find in New Orleans, and a farm-to-table kind of kitchen. We go out and buy fresh every day; there are no walk-in coolers here.”

His recipe for success: a little fresh fish, some oysters for Tuesday Oyster Night (“Dollar oyster night—we went through 900 this week!”), and lessons learned from one of the best chefs in the business. “I took the love,” Carmouche says, “and brought it to Orlando. It feels good when you’re doing it for yourself.” 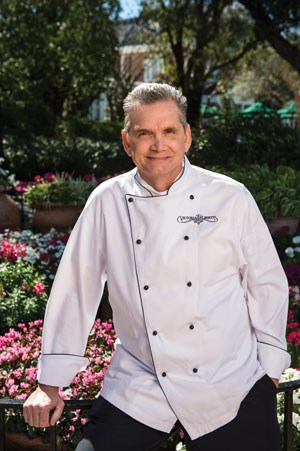 Chef Hunnel is unique on the local dining scene. The jewel-box restaurant he heads, Victoria & Albert’s at Disney’s Grand Floridian Resort, has been awarded the AAA Five Diamond Award for 16 straight years—only eight restaurants in the country have held the prestigious award longer. While you might expect a chef in a theme park hotel to labor under corporate restraints, Hunnel is given total control and considers himself the proprietor of this exemplary, world-class restaurant.

There are no views of fireworks or costumed characters dancing among the tables here—not that there’s anything wrong with that. The often three-hour, multi-course event that is a meal atop the Grand Floridian is, in a way, a throwback to the meticulous service and eye-opening cuisine reflected in the Victorian conceit of the restaurant. And if the paired servers at each table were still called Victoria and Albert, a practice that stopped several years ago, Hunnel would be King George, ruling over all he surveys.

Hunnel’s menus reflect his meticulous attention to detail and a never-ending delight for the finest, often exclusive ingredients from homegrown and exotic locales—Florida shrimp, langoustines from Scotland, Japanese Miyazaki beef, sable and king crab from Alaska (“I have a deal with the fishermen,” he says with pleasure. “We get the last crab off the boat sent directly here, it’s never frozen.”) Only three wild turbot, costing up to $1,000 each, come into the country at any one time; Hunnel gets two of them. These luxuries come at a price, the 10-course dinner in the private Queen Victoria Room running up a $340 ticket per person. But every seat is filled up to six months in advance, with more diners hoping for cancellations, and the reason is the artistry of Scott Hunnel.

"Food will take you anywhere,'' the proprietor of V&A says as he talks about  culinary excursions to Greece, Japan and China and their influences on his creations. In his 21st year at the restaurant, Hunnel can still be found in the kitchen, cooking, every day. “I still work the line,” he says, and he is just as excited about creating new experiences for the unending stream of guests as when he started. 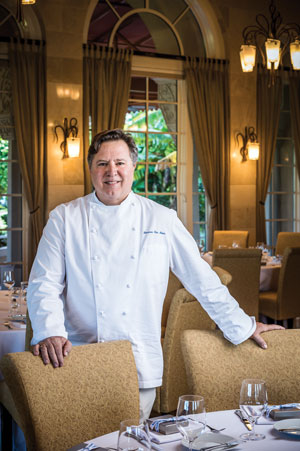 Since his induction into our Hall of Fame, the James Beard Award-winning “founding father of New World Cuisine” has continued the exploration of fusion food that began in tiny Key West kitchens and grew into a restaurant and cookbook empire.

Van Aken eschews the lure of celebrity chef television, takes any opportunity to play harmonica and readily references French philosophers and Eric Clapton with equal veneration (Clapton perhaps more). Which doesn't mean he's ignorant of his worth as a brand—his restaurant of 13 years at The Ritz-Carlton Orlando, Grande Lakes, is called Norman's, after all—but simply takes his role as culinary elder statesman on his own terms.

Two books and experiments into new restaurants have marked the past eight years. "We've looked at opportunities in Los Angeles," he says, "but it has become clear that our happiness is in Florida." Ventures in Coral Gables and at Miami Dade College's Culinary Institute have come and gone, victims of the real estate economy and bureaucracy, but it appears that Van Aken has maintained a desire to explore uncharted territories that he forged early on by inventing the term "fusion cuisine."

The imminent opening of his latest restaurant, 1921 by Norman Van Aken, may establish a new destination for innovative cooking and leave a lasting mark on Mount Dora. And he's moving forward with his own cooking school, In the Kitchen With Norman Van Aken, at the food-centric Wynwood Arcade complex in Miami.

"I get inspired," he says, coming back to his heartfelt musical references, "and then I jam. I have a fascination with teaching in my life." He has already taught well. Local alumni of "The University of Norman" include Chef Joseph Burnett of The Osprey Tavern; Viviana Altesor of Narcoossee's (and Burnett's wife); Camilo Velasco, who headed the Barnie's CoffeeKitchen food program and is now returning as executive chef of 1921; and Austin Boyd, executive chef at Seito Sushi.

With a new, Florida-focused cookbook in the works, and the menu at 1921 reflecting the treasures of modern Florida, Van Aken sees his future path as one traversing the Sunshine State. "I find something very special in Florida," he says. "I called what I was doing in my restaurants in Miami (and their echoes in Orlando), New World Cuisine. I think what we'll do at 1921 will be New Florida Cuisine." 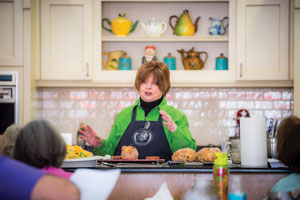 This is my love,” Marci Arthur says of her College Park cooking school, Truffles & Trifles. “When I started 33 years ago, there was nothing, no cooking schools, no Food Network. I was it!”

Conducting classes in food preparation for singles, couples, families and team building for corporations from Disney to ExxonMobil, Arthur and her team of chefs guide students through instruction in everything from chopping salad to creating hand-made pasta.

Since she was inducted into the Hall of Fame seven years ago, her classrooms have been renovated, the once-popular kitchen shop has been replaced with a “conference kitchen,” and she’s experienced drastic health issues that put her in a wheelchair for years. But at 74, the happy dynamo is back on her two feet and, as she says, feeling better every year.

“The idea of  ‘retired’ doesn’t compute…I don’t get it.” When asked about expanding or franchising, she’s very direct. “I can’t clone myself,” she says. There are, on average, a dozen classes a month, and Arthur’s book of recipes, When I Was a Good Mother, comes out in October.

Arthur says she was never interested in becoming a chef, that Truffles & Trifles, as a cooking school, was always her purpose. “I’ve done this, on my own, as a woman,” she says. “That is critically important to me.”

Her biggest surprise was the rapid intimacy that develops when people prepare food together. “I didn’t expect to become everyone’s mother. People will tell me anything.”

Half the sessions focus on team building, where corporate groups tie on aprons and learn to cooperate while exploring the mysteries of the kitchen. The rest are would-be cooks taking classes such as a recent paella and tapas night, or the family-inclusive Father’s Day night where the Truffles & Trifles menu runs from stuffed jalapeños and flank steak to brownies made with Nutella.

“There’s only two things I haven’t had happen here,” Arthur says. “Death, and an actual birth—one women even went into labor, but she refused to stay. I don’t understand, I’ve got hot water, I could have fed her right away…”

But Arthur can claim 20 marriages that began from people meeting at her classes.