Wish They All Could Be California Grills

A makeover freshened up the menu and dining room, but left intact the Disney mainstay’s 19-year tradition of superb food and an outstanding view.

Joseph Hayes,
There are things about Disney’s Contemporary Resort hotel that I adore. The reveal of its massive A-frame architecture as you approach from the Magic Kingdom on the monorail, and the magic trick when the train actually glides through the building. The fact that Richard Nixon delivered his famous “I am not a crook” speech in one of the Contemporary’s ballrooms in 1973. And the sign inside the kitchen of California Grill that commands, “Meticulously attend to every detail.”

The restaurant sits perched 15 floors above the Seven Seas Lagoon in the Contemporary, a crowning destination for West Coast-inspired cuisine and unique views of ferry boats by day and fireworks over the Magic Kingdom by night since 1995. A seven-month closure and refurbishment has freshened up this perennially popular restaurant, bringing a new focus on local, seasonal ingredients. Fortunately, like the view, the updated menu still continues to please. 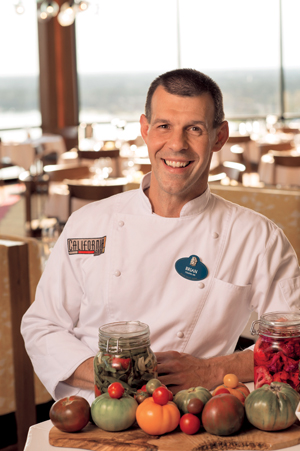 Disney’s decision to redesign the restaurant was a challenge and opportunity for Chef de Cuisine Brian Piasecki.
“The project was beyond my wildest imagination,” he says. “Just think, you take something that’s so immensely popular… and shut it down.” At 43, Piasecki is a 23-year Disney veteran. He credits his grandfather, a cook in the Coast Guard, with inspiring his love for food. He’s led the kitchens at Le Cellier at Epcot’s Canada Pavilion and Jiko at the Animal Kingdom Lodge, and in 2009 became chef de cuisine of California Grill.

Diners have always had great expectations of this high-flying location. California Grill opened as a reflection of the California cuisine movement, popularized by such West Coast chefs as Alice Waters and Wolfgang Puck. Few “contemporary” diners realize that this sleek and modern space was home to the Top of the World Supper Club, a hip adults-only eatery (“coats for gentlemen, please”) open from 1971 to 1993, which featured one of the area’s best Sunday brunches and nightclub entertainment from headliners like Mel Tormé and Sammy Davis Jr. (the place was open until 2 a.m.). In the ’80s, a twice-nightly Broadway-themed dinner show replaced the Rat Pack vibe.

So while a young California consciousness replaced the cabaret sensibility in the mid-90s, physically the kitchen was 40 years old. Now the facilities include the latest culinary gadgets such as immersion cookers, smokers and a blazing oak-fired oven.

While the room was being retooled, Piasecki was rethinking the menu. “We have control over every aspect of what’s on the plate,” he says. He has incorporated a fresh appreciation of seasonal produce, making good use of the recent boom in local and organic suppliers—when it’s appropriate. “I won’t serve Florida tomatoes in the winter. You can get them, but they’re not the best. If we can’t do it perfectly, we’re not doing it at all.”

I was lucky to have unintentionally timed my arrival on the 15th floor to view the spectacular sunset through the virtually invisible wall of windows. There are new airy, organic shapes to the furniture and lighting, and the color palette has changed from oranges and browns to pale cream and chrome, making the space seem bigger and brighter. Service is still as remarkable as ever; many of the servers have been in this room for decades and they bring practiced skill to the table. 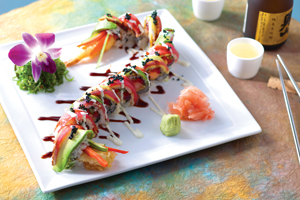 The renovation gave Piasecki a chance to update old favorites such as flatbreads (the triple cheese with pecorino, Asiago and aged provolone is particularly good; $12) and their famous sushi.

The menu changes daily, but some things are constant: pork is a favorite, served as Pork Two Ways ($37), tender grilled tenderloin and Asian-inspired pork belly, served with rich goat cheese polenta; deeply flavored beef filet ($49), straight from the searing wood oven; Sonoma goat cheese ravioli (an in-demand returnee, $14); and a new specialty, Duck in All Its Glory ($17), which almost made me applaud with 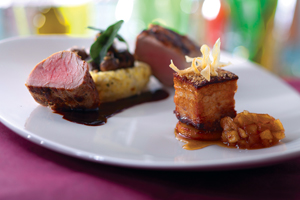 delight. The splendid charcuterie plate of duck sausage, rustic pâté rillettes and smooth duck liver, and a salty, chewy, marvelous prosciutto, was a perfect example of the curing arts.

Show business is still alive at the Grill, which seats 600 diners a night. Piasecki refers to the part of the kitchen visible from the dining room as “out here on stage.”

Asked if the “re-imagining” meets his own expectations, the one-time burger cook from Toledo pauses. “If I’m too happy, I’ll just get complacent,” he says, then pauses again. “But we’re damn close.”

New to California Grill is a 10- to 14-course omakase menu, a chef’s choice experience that places one group of diners nightly at the sushi bar for an extravaganza of the kitchen’s freshest. The $175 spread might include everything from traditional jewels of sashimi and rolls not found on the regular sushi menu to sesame beef tartare and spicy Florida oysters.

This article appears in the March 2014 issue of Orlando Magazine.
Categories: Reviews