Where Wood Is Understood

At Hillstone, it rules the grill and décor to perfection. The marvelous lakeside view is hard to beat too.

Joseph Hayes,
Across the busy street from kitschy
Red Fox Lounge and just up the road from the corporate mega-burritos at Chipotle, the high-end delights of Hillstone may seem oddly situated on a busy Winter Park thoroughfare. But I guess you take your idyllic lakeside locations where you find them.
Resting on beautiful Lake Killarney, Hillstone has been serving its well-crafted menu since 1996, when it was called Houston’s, and attracts the kind of crowd that can fly in with seaplanes to the back door. But people in cars like it too.
I’ve directed several out-of-towners in search of a stylish night here, and I usually get a call saying they can’t find it. Maybe it’s because the sign outside screams RESTAURANT while whispering Hillstone. Or the fact that many people still say “Houston’s, or whatever they call it now, Hill … something.” The parent company (also Hillstone), runs a dozen different brands across the country, and while Houston’s still exists in other locations, the name change to the Winter Park restaurant in 2010 both confused some regulars and made new converts by drawing attention to the restaurant.
The interior is a construction of acute angles and soaring spaces; floors, walls and tables built of warm burnished woods, a theme that will reappear on the menu. The paneled roofline extends through ceiling-high windows over outdoor seating and lounge areas, which in turn lead to park-like walking paths, hidden benches and ultimately to the lake. The discovery of the raised gardens was a pleasant surprise, boxes of rosemary, basil, peppers and tomatoes overhung by arbors of grapes and passion vines. The contrast between this calm and sophisticated oasis and the mayhem of the road at its front door is remarkable.
As, may I say, is the food.
Most of the menu items are wood grilled, a quick and relatively healthy way to prepare deceptively simple dishes, and if I had any complaints about Hillstone it would be the hyperfocus on grilling. If you don’t like burgers, steaks, fish, chops or chicken burnished with the smell of hardwoods, you might want to make a stop for tacos a few doors down. If you do relish the char and earthiness of a smoky entrée, Hillstone is the place.

The wood-grilled artichoke is to die for, as is the view from the patio.
I’ve had baby artichokes straight from the field in the ’choke capital, Castroville, California, as well as savored pan-braised carciofo alla giudia in the Jewish quarter of Rome. But none of that prepared me for Hillstone’s wood-grilled artichoke starter ($13). The sweetness of the heart, the perfume and crunch of charred leaves, the atavistic art of scraping the petals through your teeth while getting that primal frisson of danger from the smell of burning wood (Run! But eat first!), makes for a marvelous and deservedly popular dish. I would return just for this dish.
Cooking with wood is never a straightforward process. Even the best equipment has flare-ups and hot spots, and wood is itself uncooperatively temperamental. So to deliver a piece of fish so perfectly done as the hardwood grilled trout ($24) is no small feat. Simply presented on an unadorned white plate with a veg of the day, the fish has crunch on the edges and moist, tender flesh in the middle, and that’s as it should be.
The plain plating might be a surprise in this age of mile-high presentation and inedible garnishes, but food is the star here. A “Best Ribs” nominee in our Dining Awards, Hillstone delivers a plate of a dozen pork ribs ($27) with shoestring potatoes and little else. The meat is so tender it quite literally falls off the bone. The slightly sweet sauce may not have the kick of some local ’cue favorites, but it complements the smoky pork. The pile of extremely thin fries should be eaten quickly, as they seem to stick together after a few minutes, but you’ll be sopping up the sauce with them so that shouldn’t be a problem.
Chuck steak, ground in-house, firm, slightly sweet buns made on premises, high-grade cheddar and good, often house-grown tomatoes makes for a cheeseburger ($15) I’d stack against any in town, and my burger-centric friends agree.
I’ve heard reactions pro and con about the service, but I’ve visited three times since the makeover, and I’ve always been impressed—nay, stunned—by the attention and professionalism of the servers. Our charming waitress delivered the specials as a piece of theater, complete with dramatic pauses and sympathetic eye contact; and maybe it’s the playwright in me, but I developed a small crush on her right there.
With a large part of the menu focused on wood grilling, Hillstone may sound like a one-trick pony. But they perform that trick marvelously well.
HILLSTONE
215 S. Orlando Ave, Winter Park
407-740-4005
hillstone.com/hillstone
Entrees: $15-$36 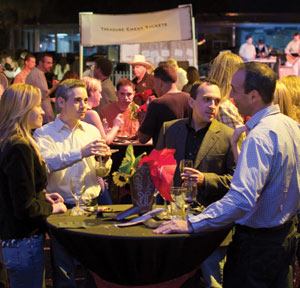 The culinary festival scene hereabouts expands this year with the creation of the Winter Park Food & Wine Classic. The festival is a two-parter: last year’s Cows ’N Cabs event, which combines offerings from 16 local restaurants and international wine merchants, and a Friends of James Beard dinner. Both events will be held in the west meadow
of Central Park.
The dinner on October 26, limited to 150 guests, is a scholarship fundraiser for the Rosen School of Hospitality. Featured chefs include John Rivers, James and Julie Petrakis, Henry Salgado, Kevin Fonzo, Kevin Tarter, Brandon McGlamery and Jamie McFadden. Cows ’n Cabs, happening on October 27, benefits the Coalition for the Homeless and Community Food an

d Outreach Center, and will offer cowboy-bedecked guests a chance to sample food from Cress, Mi Tomatina and Bosphorous Turkish Cuisine, among many restaurants.

Both events start at 7 p.m. Beard dinner tickets are $80; general admission to CnC is $110, with VIP early admission going for $140. wpfoodandwineclassic.com

This article appears in the October 2012 issue of Orlando Magazine.
Categories: Dining