From pork chops to Korean fried chicken, Chef Ryan Vargas infuses Emeril’s Tchoup Chop with creativity. And he can do wonders with the sizzling robata grill.

Joseph Hayes,
Celebrity chef Emeril Lagasse has become a champion of Florida restaurants. From Central Florida hotspots Rusty Spoon, Cask & Larder and Cress, to Maison Blanche in Longboat Key and Up the Creek Raw Bar in Apalachicola, the Emeril’s Florida TV show on the Cooking Channel has cast a much-deserved eye on the Sunshine State and declared it good.

He probably could include his Tchoup Chop restaurant without much argument.

Here’s a dichotomy: a highly regarded restaurant named after a street in New Orleans, in a South Seas-inspired hotel that serves neither Cajun nor Polynesian cuisine. Fortunately, if you ignore that puzzle, the food lives up to the hype. 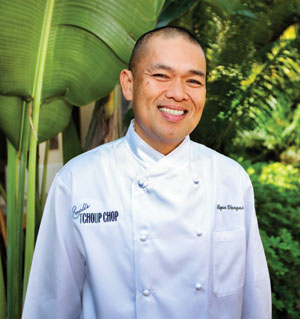 I first visited Tchoup Chop when it opened in 2003. (It’s pronounced “chop chop,’’ a fusion of Tchoupitoulas, Emeril’s flagship restaurant’s home street, and the various meanings of “chop”—cut of meat, chopstick, and a measure of ability, as in “he’s got great chops’’). I was impressed with the setting, tucked within the lovely gardens of the Loews Royal Pacific Resort (call for directions to the hard-to-find valet) and the menu’s potential. But I found things a bit too frantic and over-thought.

It seems far more relaxed now, particularly after a recent renovation. Service is attentive and knowledgeable (great wine staff) without being obtrusive, and the new menu, courtesy of Chef Ryan Vargas, has a bit of fun and flair.

Vargas joined the team in late 2013 and brought with him influences of his childhood in Hawaii and years helming kitchens at the Four Seasons Resort in Hualalai and the Ritz-Carlton in Kapalua Maui. The 50th state, with its sun-drenched amalgam of Japanese, Filipino, Chinese, Portuguese and traditional Hawaiian cookery, gives Vargas a taste for combining flavors and ingredients: Okinawan potatoes and Argentinian chimichurri; Caribbean boniato and pineapple mash with passion fruit sauce; pesto made with macadamia nut.

You can’t have a place called Tchoup Chop and not have a pork chop. This interpretation ($27) is a lesson in good technique, and the simply grilled meat is triumphant with a garnish of diced mango salsa and a splash of Korean barbecue sauce. Good chops for chops.

I really looked forward to trying Vargas’ take on Korean fried chicken (“KFC,” $24), an item that has become popular in hip circles. One of the menu’s “composed dishes,” this rather too-composed adaptation places crunchy chicken bits atop kimchee-peppered smashed potatoes. I wish Chef had really taken it to the limit. Traditional Korean chicken has a paper-thin, spectacularly crunchy crust and a sweet, garlicky, spicy coating, and Tchoup Chop’s wasn’t quite there. Still, if you’ve never tried this new KFC, you’ll like Vargas’ unique take on it.

The remodel, aside from removing a troublesome water feature above the open kitchen, has done little to change the décor. The rather staggering wall of blue-lit tiles gives an underwater-ness to the restaurant, with giant glass flower leis and an impressive stained glass ceiling overhead. A pool of water lilies (ceramic, unfortunately) runs the length of the dining room, which is highlighted by low seating with round Japanese bolsters.

One major addition to the showcase open kitchen is a 1,000-degree robata charcoal grill, one of two in Orlando (Dragonfly Sushi has the other). Watch from your table or the sushi bar as magical things happen here: smoky charred eggplant cooled with mint sauce; Shishito peppers, dashed with lime and salt, blistered and potentially dangerous (one out of 10 is unexpectedly spicy); flavor-rich Korean bulgogi-style skirt steak; vinegar-splashed fatty pork belly. Order it all. 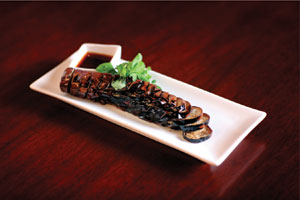 Vargas’ father was a chef in the Navy in Hawaii, exposing young Ryan to life in the kitchen at an early age. A Culinary Institute of America graduate and martial arts enthusiast (any member of his gorgeous family could kick your butt), Vargas moved to Florida nine years ago, and was more or less stolen by Emeril from a restaurant in Palm Beach. He’s an effusive and passionate chef, and his eyes lit up when I suggested he add robata-grilled Spam to the menu.

“I’m gonna do it, man,” he said, his face glowing with the possibility. “And it will
be great!”

This article appears in the June 2014 issue of Orlando Magazine.
Categories: Reviews