Tony Mantuano: Master of His Craft

At Terralina, Tony Mantuano is drawing upon his grandmother’s culinary wisdom to create superb Italian dishes. And loving every minute of it.

In 1988, Portobello Yacht Club was a stylish eatery at Disney’s newly opened Pleasure Island entertainment complex, with Americanized dishes and one of the first wood-fired ovens in the area. The fictional home of the Pleasure Island founders, it became simply Portobello when James Beard Award-winning chef Tony Mantuano started advising the kitchen 10 years ago. “For many years Portobello was the only Italian restaurant around,” Mantuano says. “I think we have to try a little bit harder now.”

That effort has been transformed into the just-opened Terralina Crafted Italian, styled as a trattoria in the Lake District of northern Italy. A sweeping glass conservatory overlooks Lake Buena Vista, and the spacious bar leads to a dining room replete with stone floors, expanses of shuttered windows and stone walls straight out of il Bel Paese. 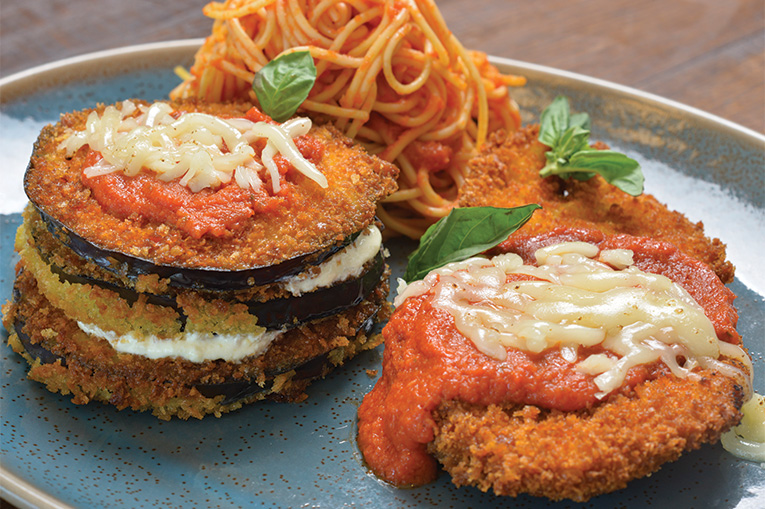 The food focus is Rome and parts South, delicate pastas and savory pizza, grilled seafood and tender mozzarella. While enticing presentation is important, flavor and simplicity is key for Mantuano, who’s been known to say that the most important ingredient is the one you leave out.

“Re-creating flavors that my grandmother introduced to me, burned into my memory,” he says. “The more you do it, you realize it’s just leaving stuff out. It’s not like you’ve got to add more … pork bones browned in olive oil and garlic, and Italian tomatoes, that’s it; you let it cook, you’ve got the best-tasting sauce ever. So that drives me.” His “Nonna’s pork ragu” turns up on hand-rolled gnocchi ($25) so light they could hover above the plate. A simple dish of bucatini and clams ($26) builds from sea-fresh shellfish and the tang of lemon to a kick of Calabrian pepper-spiced ’nduja sausage.

Along with a bestselling cookbook and multiple Top Chef appearances, Mantuano’s fame includes the award-winning Spiaggia and River Roast restaurants in Chicago; Mangia Trattoria in his hometown of Kenosha, Wisconsin; and Terzo Piano at the Art Institute of Chicago.

“I could eat Italian food every single day. I don’t know if I could say that about anything else,” he says. “And people know a lot more than they did 20 years ago, 15 years ago. A lot of people have been to Italy, so now you can grow from the Italian-American standards. What we’re doing you can find in Italy.” Even for those demanding their eggplant parmesan fix (a beautifully stacked presentation for $21), the expected side of spaghetti is made to order and presented tableside with fresh pomodoro. 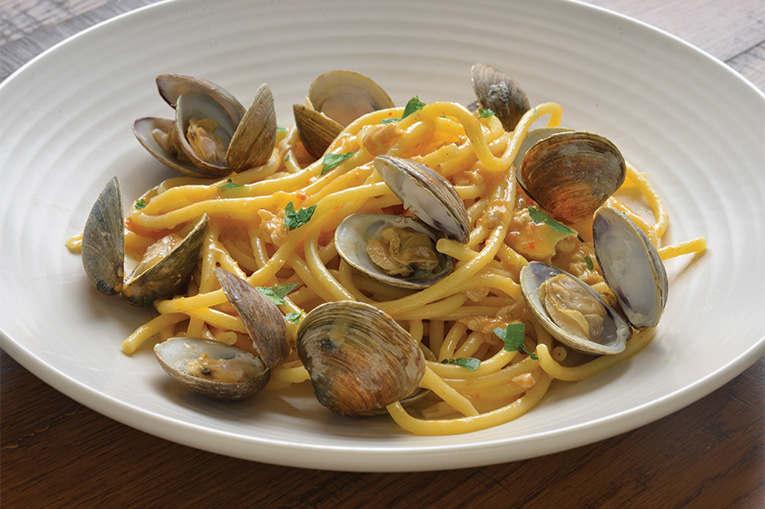 “It’s not just food on a plate,” says Mantuano. Echoing an origin story shared by other great chefs, Chef Tony inherited a love of food not from family-owned restaurants, but from tradition.

“Growing up in an Italian-American family,” he says, “every holiday was around food. I grew up in Kenosha, Wisconsin. My grandparents started in the auto industry, then opened a grocery store called Mantuano Food Shop.” A determined look crosses his face. “Which damn, I want to do again one day—but they always had the best ingredients. He was a butcher, she was an awesome cook. So that’s your life, you think everyone’s grandparents have a shop. Then going to college as a music major [he’s a trombone player] I knew that’s not what I wanted to do. I wanted to work in restaurants.”

The memory transports him back to his roots.

“It’s honest work; we take pride in the food we put on the plate. We make dough from scratch, we make pasta from scratch, and I think that pride carries through. Thirty-five years later I’m still here, still doing it, still loving it.”

There’s a fascinating dynamic in the kitchen, benefiting not only from the sensibility of a James Beard Award winner, but also a name familiar to veterans of the local dining scene: Executive Chef Justin Plank. When he helmed the kitchen at the late Park Plaza Gardens, his name preceded the restaurant’s on the awning (as in “Chef Justin’s’’), much to Plank’s chagrin. “It was kind of embarrassing … I grew up in Winter Park, the last of nine kids,” he says. “The sign said ‘Home of Celebrity Chef Justin Plank,’ and my brother still calls me CCJ.”

Plank, who tailors the menu with Mantuano, points to seafood cannelloni ($26) as a standout. “So much good stuff,” he says. “Shrimp, scallops, salmon, mahi, firm bits of swordfish, sweet corvina, mascarpone cheese, wrapped in pasta that’s paper-thin, baked in a lobster cream sauce with lemon zest and mozzarella. It’s probably my favorite.”

Plank’s journey traces from Manuel’s on the 28th and Harvey’s Bistro, to Downtown Disney’s Wolfgang Puck Café, to HUE and Park Plaza Gardens, then establishing the BB King’s Blues Club franchise around the world as a general manager. After nine years in a tangent field, he was called back to his Disney stomping grounds to revitalize Portobello when Mantuano joined the team. “Tony and I hit it off,” he says. Chef Justin calls the new Terralina “the prettiest restaurant I’ve ever been in.”

Include the world-class caliber of the food, and I think you’ll agree.