The Edison/Maria and Enzo’s complex at Disney Springs shines with superb food in fantastical surroundings.

The Story: Almost everything at the work-in-progress that is Disney Springs has a Story, a saga that everyone involved enthusiastically tells at every opportunity. Being a storyteller myself, I understand the fervor in the fiction, although I’d rather hear the real background of chef and locale, because that’s my job. But let them have the fantasy.

So, the Story of Maria and Enzo: Two immigrants from Italy arrive at the Disney Springs Air Terminal (or seaplane terminal, depending on whom you ask) of Trans Global Airways, and start a bakery. When the Terminal closes, they open the Pizza Ponte pizza a taglio for slices, sandwiches and dessert. Their success allows them to buy the defunct airport building and launch the upscale Maria & Enzo’s Ristorante. During renovation, a set of rum runner tunnels between the old terminal and the decommissioned 1920s power station next door are discovered, and Enzo’s Hideaway Tunnel Bar is born. Conveniently, the tunnel gives Maria & Enzo’s guests access to The Edison, a massive steampunk-styled restaurant and nightclub created in the powerhouse’s shell. 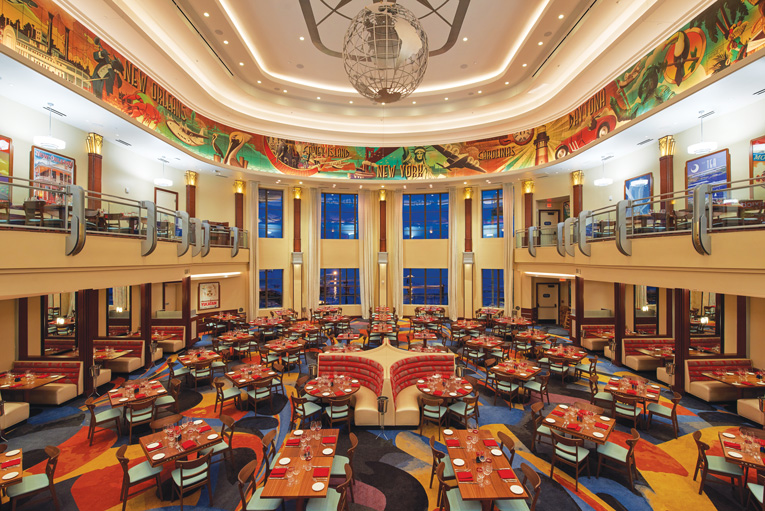 The dining experience is also made memorable by an awe-inspiring main room with floor-to-dome windows amid a retro airlines theme. (PAUL LOWELL)

If we follow the story, then we have to wonder who on the city planning board thought putting a power plant right next to an airport was a good idea. But let’s not get too logical.

The Reality: Built on the steel bones of the late lamented Adventurer’s Club (my all-time favorite Disney experience) and the BET Club dancehall, the four restaurant Edison/M&E complex is vast. (The operators of the entire facility, Patina Restaurant Group, also run Epcot’s Tutto Italia and Via Napoli, as well as Morimoto Asia.) Old Pleasure Island habitués will be in awe at the expanse of M&E’s 50-foot-high main room—the building never seemed that big before—and the floor-to-dome windows overlooking the lagoon. The Edison is stacked on two levels, filled with industrial remnants found at estate sales and on eBay. Below, in one of the fabled underground Disney access passages that cast members used to enter the building, is the atmospheric Hideaway Tunnel Bar, which I have to say is the part I like best.

Maria & Enzo’s, with its “international gateway” theme, has faint ghosts of the Adventurers Club, an exploration of faraway lands. The Art Deco frieze surrounding the dome points to destinations at every compass cardinal from New York to Mexico, and hosts are dressed in sharp, 1920s airline styles, from back when air travel was a prestige event. The Italian “ambassadors” found throughout the Enzo Empire are recruited by the Patina Group from Italy, and live in a company-owned apartment building during their yearlong residencies.

Executive chef Theo Schoenegger is a big deal, raised in the Tyrolean town of San Candido in Northern Italy, an area with varied culinary influences from a history of ownership by Roman Italy, Austria, Bavaria, the Napoleonic Empire and Italy again (and again). Schoenegger’s young upbringing at his restaurant-owning mama’s elbow made his career in the kitchen inevitable.

“I never had the desire to do anything else,” he says. “My passion is Italy.” Chef Schoenegger, who has moved to Orlando, has headed Sinatra at Wynn Las Vegas; Patina at the Walt Disney Concert Hall in Los Angeles, where he earned a Michelin star; and several acclaimed restaurants in New York, including Rock Center Café.

His cuisine here is of Southern Italy, the somewhat neglected area south of Naples and down to Sicily. Tender calamari, palm-sized arancini rice balls and interesting thumbnail-sized fried cheese fritters made with robust caciocavallo cheese start the meal. Schoenegger is proud of his tomato sauces, bright with fresh flavors, and a mustarda di frutta (fruit mustard) that is right on the cusp of the Next Big Thing.

House-made pasta from spaghetti to casciata al forno, a layered dish with vegetables, meat sauce and cheese virtually unknown outside Sicily, is worth ordering. Steaks are eye-openingly good: I would put the tenderloin against almost anything in town. And the three Parmigiana dishes—chicken, veal and eggplant—are all enormous (the chicken fills an entire plate) and impressive. Also monumental: the exclusively Italian wine and craft cocktails menu. Service is very Italian, attentive but not intrusive.

Pizza Ponte is next door, a by-the-slice pizzeria that turns out thin crust Roman and thick, square Sicilian “grandma” slices, crisp and leopard-spotted from hot ovens. Photos from Enzo’s family line the walls (if the Story is so important, what is their last name?), and the combo pizza and sandwich counter makes you hungry before even ordering, a gleaming red meat slicer at ready to carve mortadella, prosciutto di Parma and cotto ham. The bakery case is brimming with Italian pastries; fresh filled cannoli, olive oil cake and mascarpone cheesecake, made at the Italian Pavilion at Epcot. 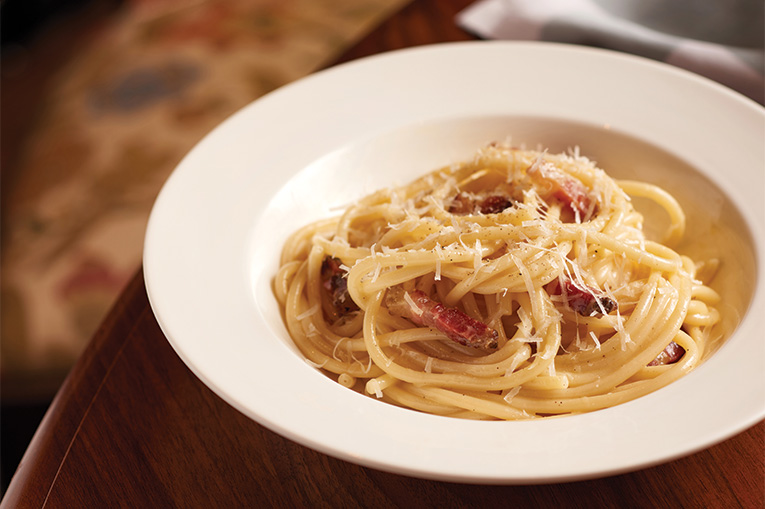 A walk outside the “terminal” leads to a round cupola, neon lights pointing to Enzo’s Hideaway Tunnel Bar and Restaurant via a set of stairs ending at an unmarked iron door. Within, the tunnel atmosphere and speakeasy décor opens into a large room with bar, wine cellar and graffiti-filled concrete walls. The casual feel reminds me of Tutto Gusto, Epcot’s wine bar, reflecting an osteria of Prohibition vintage, echoed in the menu of rums and bourbons, house-aged salumi and cuisine of the Roman style. And honestly, my friends, there’s not much better than food from the Eternal City.

Chef John Miele, who has worked with Bryan Voltaggio in D.C. and Ed Brown in New York, resides in this kitchen. His is one of the very few places that has carciofi alla giudìa on the menu, fried artichokes spread out like a crispy sunflower and delicious. Rustic staples like bean and vegetable soup, beautifully overflowing antipasti platters and little polpettini meatballs are enough for a meal with a glass of wine. More hand-made pasta highlights exceptional bucatini alla carbonara with house-aged pancetta. And like its big sibling, the steak, charred and impeccably cooked, is remarkable.

In classic smuggler tradition, in the back of the Hideaway, behind the wine racks, is a “secret” tunnel that leads to the lowest level of the Edison Gothic illusion… but anyone can use it.

The Edison, the overarching (and overshadowing, with its towering brick smokestack) presence, doesn’t share the Italian identity of its neighbors. Instead, reimagined takes on tavern food join an intensive cocktail menu from three bars.From the giant, working (and loud!) clock in the upstairs lobby, to a working steam engine and roaming “inventors,” the Industrial theme is strong. The menu offers items like the “hawkers box of balls” (lamb meatballs in a harissa sauce, served in a wooden box); candied bacon strips hung on a mini-clothesline; crabcakes, fried chicken and bacon-wrapped meatloaf; and a sirloin, shortrib and brisket burger. Late-night breakfast is available for the afters crowd.

Set for family dining during the day, the space becomes an over-21 entertainment venue after 10 p.m. (with cover charge), filled with a live, Postmodern Jukebox-style band, palm readers and acrobats recruited from the recently shuttered Cirque du Soleil, performing what has been unofficially called “Cir-lesque.”

All together, the four restaurants, indeed the entire complex, are prime examples of how to use the talents of world-class chefs and resourceful designers to their best advantage. The exceptional efforts at the Mario & Enzo restaurants produce a respectful take on classic Italian cuisine that rises above expectations for a tourist entertainment center, and the environment and attention to detail, both at M&E and the quirky, fun Edison, is thrilling. I can’t wait to return.