Chef Venoy Rogers, formerly with the American Kitchen Bar & Grill, was recently named executive chef at the Grand Bohemian Hotel and its signature restaurant, The Boheme. 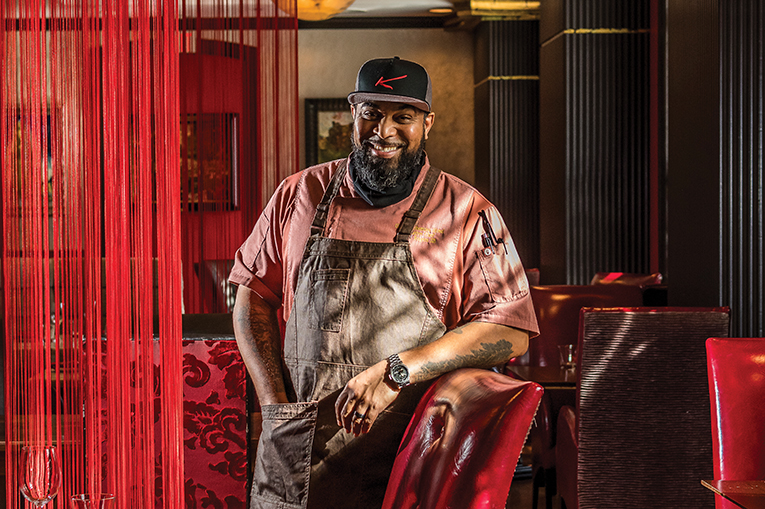 Describe your role at Grand Bohemian.

As executive chef, anything food related on that property is my responsibility. We also have banquet and catering operations. We have a fair number of groups to cater including MLS (Major League Soccer) teams and WMLS. We started with the NBA recently, getting in the teams that are visiting to play our Orlando Magic—their pregame lunches, postgame dinners, arrival brunches.

What inspired you to become a chef?

My first love of food is to eat it. That’s what got me cooking in the first place when I was a kid.  We lived in Japan for four years when I was a kid. My mother was from Brazil. My father (a U.S. Marine) was from Oklahoma, so I had South American food and Southern American food going on. Our family friends were from all over the place. When there was any type of celebration, there was always a smorgasbord of different types of food.  I loved every single one of them.

Who’s been your greatest professional influence?

My mentor, Chef Andrew Black. I worked for him at the Skirvin Hilton Park Avenue Grill at the tail end of culinary school and after graduating. He made the biggest imprint on me as far as my foundation of how the kitchen works and how to work the kitchen. He’s Jamaican—a Black guy like me—which was cool and easy to look up to. His style was admirable and exciting—he was a no-rules guy but at the same time respected all the traditions, techniques and old-school culinary values.

When I was a young boy we lived in Japan for about four years. We used to go to the Chicken Shack. We lived in Iwakuni, Japan, and it was up in the mountains.  I remember the ambiance of the place with the koi ponds in the restaurant, and you’re sitting outside on the side of this mountain. If I close my eyes I could almost taste this chicken.

What’s an underappreciated flavor you think people need to know about?

Umami. Just finding it, understanding where it comes from, what it is. Knowing that most of us have it in our cabinets or refrigerators whether it be soy sauce, tomato paste, mushrooms, parmesan cheese—things like that.

What’s the most creative dish you’ve ever made?

I did a “Mac’a’Uni and Cheese.”  I took the idea of macaroni and cheese, but I used seasoned rice noodles and made a faux cheese sauce using uni, sea urchin gonads. I used a bit of Mimolette, French cave-aged cheddar, and combined them in an appetizer topped with sea weed and toasted sesame seeds, topped with sauce from uni and some fresh uni as well, with black truffle. This one was a home run flavor-wise. (The dish won second place at Orlando’s 2020 Fusion Fest competition.)

Name three things that are always in your fridge.

Soy sauce. Mayo. There’s a toss-up between tea and eggs. I love my iced tea.

What do you cook on your day off?

Normally, that’s when I like to break out the smoker and smoke something. Pork butt, brisket, beef ribs or pork ribs. If I have a Super Bowl gathering at my house, it’s all about the grill.

What’s the one thing that you want us to know about dining at the Grand Bohemian?

Expect an experience. We’re lucky we’ll be going through a renovation that includes Bösendorfer Lounge and The Boheme restaurant. I’ll keep the same creative approach, mixing and matching techniques from traditional to new modern and the fusion of different types of cuisine, with quality ingredients responsibly sourced.

What are your rules to live by?

Treat others as you want to be treated. I try to be a good leader. Somebody makes a mistake—I know if I made a mistake I would want a second chance. Just basically, the Golden Rule.

Inside The New Ownership at Charlie's Bakery