Story of a… Auctioneer

In his 28-year-long career as an auctioneer, Bob Ewald has handled roughly $120 million in property. 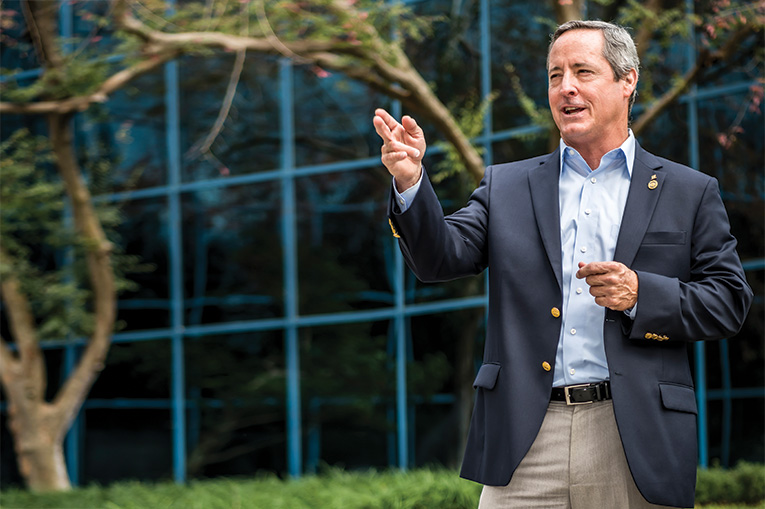 Bob on the job. Ewald started his career working at a bankruptcy law firm, where he got drafted to run auctions. In 1992, he launched Ewald Auctions, where his wife, real estate broker Tammy, works and their four grown children “have worked in various capacities.” Because he insists they call him Bob on the job, “now all my kids call me Bob. Our grandkids call me Bob.”

Getting his rhythm. Ewald prides himself on the clarity of his chant, the unique singsong cadence an auctioneer develops. While studying for his auctioneering license, he learned such typical industry phrases as uddaga for ought to go. “It’s five, uddaga 10, uddaga 30,” he demonstrates.

Find the money. Ewald often handles bankruptcy cases involving real estate and other property. He remembers a “hoarder house” in Rosemont that he was auctioning off with all its contents. “There was stuff packed probably chest deep everywhere. I had a crew in there for more than two weeks—five people just sorting through what we found.”

Rain crowds. Bad weather draws lots of potential buyers at auctions, such as the 650 bidders who showed up for a surplus auction during a thunderstorm. “Everybody thinks no one is going to go. They think, ‘I’m going to get a deal today.’ ”

Banking on the police. “I hire a cop at every auction. In 28 years, I’ve never had a problem because I always hire a police officer—if for nothing else, presence.” Police remove people who are disruptive or who fail to honor a bid. They also act as security with the large amounts of cash that can be exchanged. At one auction 20 years ago, “we had $290,000 in cash. We had seven officers. They drove us to the bank where we made a drop.”

And the winner of the bidding war is … Ewald, who gets paid on commission, and his clients. “The lowest number of bidders I’ve ever had was three. It was a piece of property we thought was going to bring $325,000 to $350,000, and we ended up getting $490,000 for it because two guys [who didn’t like each other] got into a bidding war. They didn’t want the other guy to have it.”

Arts and Events, COVID-19, Where Orlando