As Disney Springs nears completion, the new flavors dished out by famous faces are causing quite a buzz.

The Transformation of Downtown Disney into Disney Springs has created a dazzling array of shopping and prime dining. Here’s our “overhead’’ guide to the culinary part—from new neighborhoods of The Landing and Town Center, to the standbys at the Marketplace and West Side. Plus, we have some celebrity chefs for you to meet. 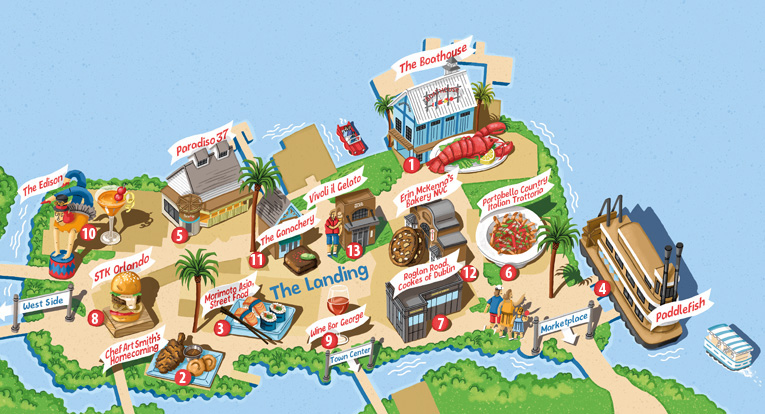 1. The BOATHOUSE
Fish and steaks populate the menu at the dockside Boathouse, and while the atmosphere is decidedly New England, there are a few Florida local seafood items available in season. A high point is the lobster bake, with Maine lobster, clams, mussels and the fixings served in an overflowing tin pail. It’s too bad you can’t actually dine in the classic powerboats anchored to the docks, but a trip around the lagoon can be had in 1960s amphicars or a 40-foot Italian water taxi. theboathouseorlando.com

2. Chef Art Smith’s Homecoming
What else would you expect from strictly Southern Art Smith than local spirits at the bar, Church Lady deviled eggs and fried chicken and doughnuts? The congenial Smith makes his home in rural Jasper, Florida, so he’s often found on Disney property. Homecoming has a Florida farmhouse feel and a significantly local presence on the menu, with a Florida fish of the day sandwich a highlight. Lunch counter burgers, catfish sandwiches and Smith’s own shine cake (soaked in moonshine syrup) are complemented by very Southern hospitality-sized pours from the cocktail bar. homecomingkitchen.com

4. Paddlefish
Executive Chef Mark Boor has been at the former Fulton’s Crab House since 2011, steering the paddleboat (yes, the paddle is returning) into one of the highest grossing eateries in the country. Styles and tastes change, and the modern upgrade into Paddlefish left not much more than the steel frame standing, bringing a new look and feel to the venerable establishment while retaining some menu staples including Florida stone crab and lobster corn dogs. paddlefishrestaurant.com

5. Paradiso 37
This two-story salute to the cuisine of the 37 countries of the Americas sits in the footprint of the much-missed Adventurers Club, trading fantastical tales of world travels for a world of Brazilian cachaca chicken, Chilean salmon, South Carolina ribs and 37 varieties of tequila. Paradiso 37 originally opened in 2009 but expanded its waterfront setting as part of the Disney Springs transformation. paradiso37.com 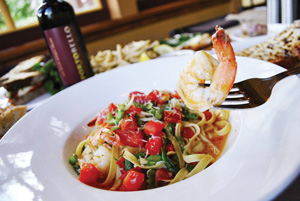 6. Portobello Country Italian Trattoria
Portobello Yacht Club was turned into a premier spot for fine Italian dining by Top Chef Master Tony Mantuano, and is now under the guidance of Executive Chef Justin Plank, who once helmed and rebranded Park Plaza Gardens with his own name. A wood- burning oven turns out a short but impressive list of pizzas, slow cooked pork ragu tops house made gnocchi, and tastes of Sicily, Calabria and Tuscany complete the menu. portobellorestaurant.com

7. Raglan Road, Cookes of Dublin
If it’s a party you’re looking for, Kevin Dundon’s ode to the Old Country is the place. Transitioning without a misstep from old Downtown Disney to the new Springs, the pub offers beers and ales brewed exclusively for Raglan nightly—sometimes hourly—high-stepping dancers and a menu crafted by Ireland’s Chef of the Year. Beef stew infused with Guinness, baked salmon topped with smoked salmon and silky baked haddock with Dubliner cheese dip are features. Outside, Cookes of Dublin offers a quick takeaway of a battered burger, Irish sausage (also battered)  and an impressive serving of fish and chips—battered, of course. raglanroad.com 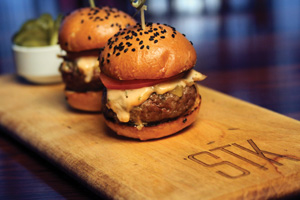 8. STK Orlando
With locations from New York and Los Angeles to Canada and Scotland, STK combines nightclub with upscale date night with family dining (creating a kids menu for Orlando was a surprise to them). The styling is slick, with a backlit bar, surrealist horn sculpture wall, live DJ in the dining room, and a menu extensive in steaks, bite-sized Wagyu beef Lil BRGs and Florida grouper. Views from the upstairs dining/dancing room give a panorama of Disney’s new look. disneysprings.com/dining

9. Wine Bar George
Orlando’s Master Sommelier superstar George Miliotes, who has designed wine programs for Seasons 52 and California Grill, steps from behind the scenes to open a 210-seat, multi-room wine and light food bar near the Hangar Bar in The Landing in late 2017. “I’ll be there every day,” he says.

10. The Edison
The Edison is working toward a spring 2017 opening. Industrial gothic, in keeping with the overall steampunk look of The Landing, and inspired by the Los Angeles nightclub of the same name, Disney Springs’ Edison will offer classic American food, cocktails, cabaret, music, even contortionists and palm readers in decor matching a 1920s-era power plant. The venue also will have a performance space called The Lab, a waterfront patio and several lounges, including the Patent Office, the Telegraph Office and the Radio Room. Rumors of underground bars and restaurants are unsubstantiated. 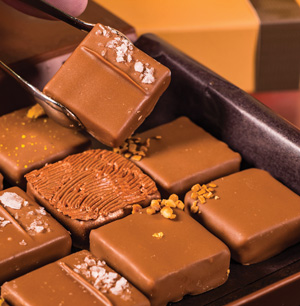 Quick Bites:
11. The Ganachery: The brainchild of Disney master pastry chef, Stefan Riemer, with jewel-like ganache and bars made daily, by hand. 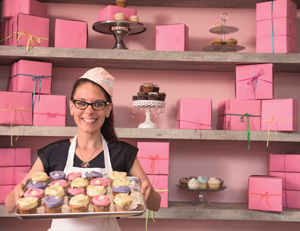 12. Erin McKenna’s Bakery NYC: Imagine how hard it is to make a gluten free, vegan, kosher bakery delicious. Mc- Kenna’s will even deliver cakes, doughnuts and cookies tableside to most Disney restaurants.

13. Vivoli il Gelato: The original landmark Vivoli started in Florence in 1932, garnering a reputation for being the best in a gelato-crazed city, and now we get the second location, with flavors made fresh every day. 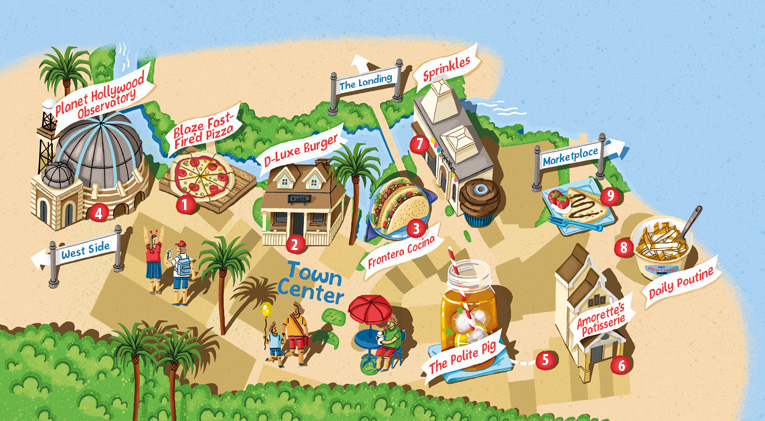 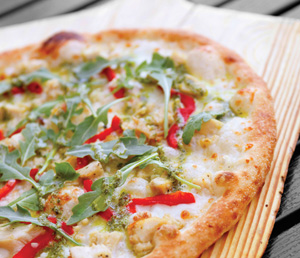 1. Blaze Fast-Fire’d Pizza
Blaze might actually be the best deal in the Springs. One price, fire-baked pizza, with in-house dough and as many toppings as you’d like—and there are a lot of toppings. blazepizza.com 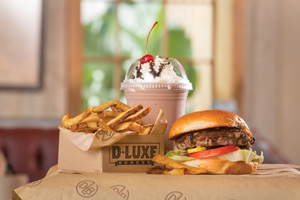 2. D-Luxe Burger
A former cattle ranch (according to the backstory), the Disney owned-and-operated shop serves beef, chicken or veggie burgers, fries and “gelato” shakes. Burgers are of a nice, hand-filling size, the El Diablo chorizo and beef is suitably spicy, and the patio overlooks the Springs. disneysprings.com/dining/d-luxe-burger

4. Planet Hollywood Observatory
The just-completed transformation of Planet Hollywood into a hybrid restaurant/turn-of-the-last-century observatory adds a theatrical flair to this already entertainment-filled eatery. Apart from a menu augmented by Guy Fieri’s burger and sandwich offerings, there will be a DJ, along with live entertainment on an outdoor bar and patio overlooking Town Center. Massive video walls and multi-level “hangout” spots feature both type of stars — the solar system and celebrities. planethollywoodintl.com/locations/orlando

5. The Polite Pig
Set to open in April 2017 just across from the UNIQLO clothing haven, The Polite Pig is owned by local food heroes the Petrakis family—James, Julie (The Ravenous Pig, Cask & Larder) and Brian (Greens & Grille), Featuring a healthy slant on barbecue, they’ll offer beer, wine, cocktails and house-made sodas, all on tap. 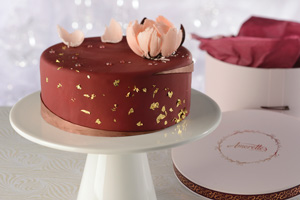 7. Sprinkles Cupcakes: Candace Nelson invented the gourmet, strictly-cupcake bakery with Sprinkles in Beverly Hills, and now has branched out to include cookies, ice cream and the bright pink Cupcake ATM.

8. Daily Poutine: a kiosk featuring the Canadian fries, curd and gravy staple along with Latin, Italian and French permutations.

9. Aristocrepes: Parisian street food courtesy of Disney animation, with savory crepes, sweet dessert rollups and wine on tap. At the edge of Marketplace on the causeway.

Rainforest Café
The elephants, the chest-pounding gorillas, the rainforest are all still there, the flame-belching volcano still erupts, the coconut shrimp and shrimp, chicken and sausage Pastalaya are still kid faves. rainforestcafe.com

House of Blues
The dining area was expanded a few years ago and the menu concept switched briefly, but shrimp and grits, ribs and Loretta’s meatloaf remain. houseofblues.com/orlando

Wolfgang Puck
Opened in 1997 and continues to be one of the highest grossing restaurants in the country, even as diners’ tastes may have moved past the somewhat staid menus and Puck’s signature pizzas. wolfgangpuckcafeorlando.com 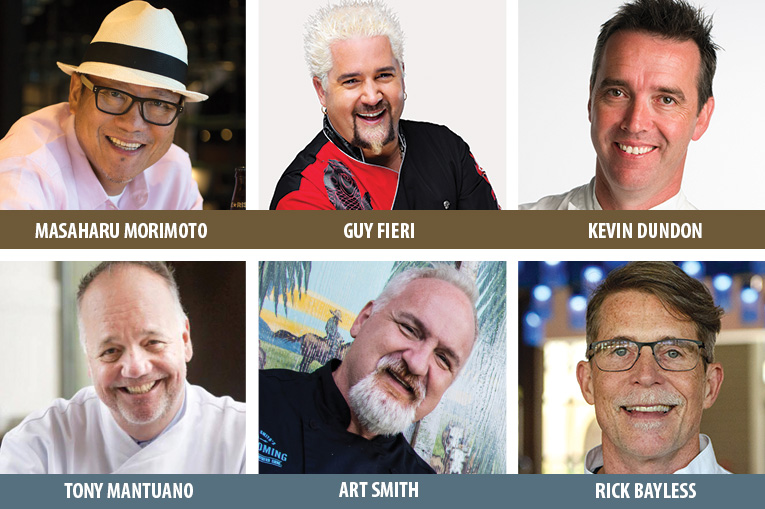 Say hello to 6 chefs who capture the diversity of the Springs.

Guy Fieri, Planet Hollywood Observatory
The fiery Fieri is a frequent visitor to Epcot Food & Wine fests, and while his ubiquitous TV shows may show him eating an unusual range of “food,” he is a hit with the fast-casual crowd and those looking for adventure on the plate. The restaurateur has crafted a burger and sandwich menu to spice up the wider range of offerings at the vastly remodeled Planet Hollywood.

Tony Mantuano, Portobello
James Beard Foundation Award-winning Mantuano is one of the most revered chefs in the business and, judging by the rating of his restaurant Spiaggia as the only four-star Italian restaurant in Chicago, one of the best. Mantuano revamped the former Portobello Yacht Club seven years ago into a refection of his love for regional Italian cuisine, and he visits often.

Masaharu Morimoto, Morimoto Asia
With 10 other restaurants around the world, Iron Chef Morimoto calls his Disney Springs venture his first pan-Asian location. As reflected in his award-winning cookbooks, Morimoto-san considers his menus to be 21st century global cooking; yet like Japanese chefs have done for hundreds of years, he’s been known to break into song while serving a meal.

Art Smith, Chef Art Smith’s Homecoming
Smith is a celebrity chef in many ways; not only a frequent star on food shows, but a chef for Oprah, President Obama and for Bob Graham when he was Florida governor. A James Beard Foundation cookbook award winner, Smith interned at the Walt Disney Magic Kingdom College Program in 1981, and is the first graduate to return to Disney property opening his own restaurant.