The menu at Southern Spice spotlights Indian dishes of a region that many diners may have overlooked. Notice is hereby served.

As Southerners ourselves (born to it or transplanted), it seems natural to embrace the foods of other Southern lands. South Korea, our linchpin for kimchi, bulgogi and extra crispy fried chicken, we adore; and southern Italy, home of eggplant parm, cannoli and, of course, pizza, is no stranger. Cantonese dim sum makes southern China very familiar indeed. Provencal France lends us ratatouille. Andalusia brought gazpacho and paella to our tables. 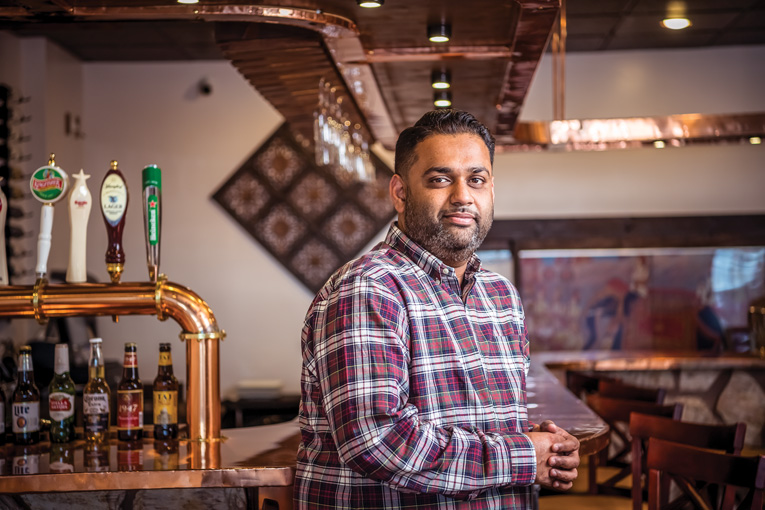 But our conception of Indian cuisine is fixated on northern Indian restaurant fare: gravies, butter chicken, samosas and korma—not that I wouldn’t enthusiastically eat any of that. But to experience the cooking at Southern Spice might mean changing your preconceptions of food from the subcontinent. It’s a change worth making.

The menu at the Southern Indian-focused restaurant from Sunny Corda, Orlando’s Indian food potentate with three other local restaurants, is enticing, exotic… seductive.

What lies beneath the baked roti cover of parda biryani ($15-$18 depending on protein), that steams and envelops the senses when opened? A mound of aromatic basmati rice, mixed with peppery masala and meat, and “cooked in the oven until it becomes one” as the menu says. And a wonderful one indeed.  Is that the sharp bite of sorrel leaves amid the star anise in tender lamb Gongura Ghost ($17)? Kingfish in a Tamilan curry or mahi enveloped with curry leaves and fenugreek—it’s all new journeys to an alluring land.

The appetizer section alone is enough for a banquet, and full of both vegetarian and meat-based items. In case you haven’t been out drinking in Southern India in a while, “chicken 65” is a fairly ubiquitous bar snack from Chennai. At Southern Spice it has become paneer 65 ($8), cubed cheese curd battered, deep fried and tossed with south Indian masala and curry leaves. Order several. Yams, lentil balls, spinach patties and crispy kale are just some of the meatless bites. Andra chicken liver ($10) is a deeply flavored and colored combo of livers spiced with coriander, cardamom, hot chili, cumin and ginger, and mixed with sliced onion. Be aware: hot is very hot, medium is invigorating. And orders of deep-fried chicken drumsticks (the noted “drums of heaven”; $8); tilapia pan-seared in ginger and garlic; and yoghurt-marinated lamb could be a very satisfying meal. 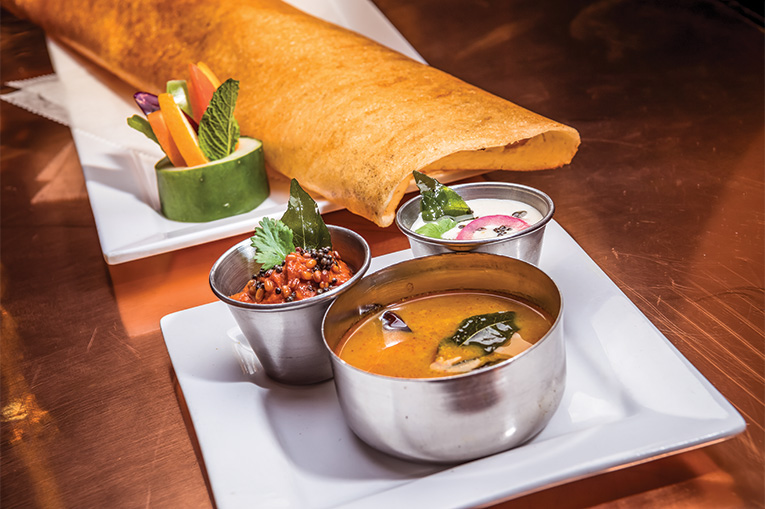 Corda brings his mother’s recipes to the table with dishes from Andhra Pradesh, unique to this southeastern region known for a seafood-rich coastline on the Bay of Bengal. In chepala pulusu ($22), a tamarind-based spicy curry surrounding tender mahi spiced with coriander, cumin, chillis and the ever-present garlic and ginger, one can find singular tastes in family traditions. Even something as simple as curd rice ($10), the salty, sharp congee of India, is a revelation, as is the appropriately rhythmically named bisi bele bhath ($14), which just translates as “hot lentil rice dish.”

The manager served as our waiter and told us the tale of “railway-style” chicken (not to be confused with the current darling of upscale dining, airline chicken, referring to a particular cut). Inherited from the time of the British Raj, the recipe tempers hot jhol curry with soothing coconut, and is a staple of train travel to this day, but difficult to find in restaurants. “My chef knows how to make it,” he said, without wanting to reveal the recipe or the chef’s name (“If I tell, another restaurant will want to steal him away.”). Served here as Chennai Express ($15), it is a spectacular curry, fragrant with turmeric and garam masala, mustard oil and garlic.

The state of Andhra is the originator of classical carnatic music, a combination of rhythm and sound that invokes an almost hypnotic state. Which is how I found myself throughout the meal, deeply involved in discovering every nuance of the food. Take achari chicken tikka ($16), “chicken breast marinated in amma’s secret pickle” as the menu says. Using achari pickling spice is sort of like repurposing pickle juice after the pickles are gone. A masala (blend of spices) that leans toward the tart (mango powder, bitter carom seed, sour asafetida), it adds a tangy, bright flavor unlike citrus or vinegar but with the same lift. It’s one of the more intricate, ingredient-intensive dishes (and that’s saying a lot for Indian cuisine).

There are ample vegetarian dishes on offer, and my complaint is not new: why not a sampler platter? I adore saag paneer (Indian cheese with spinach; $16); stuffed eggplant in coconut gravy, tamarind and mustard seeds (gutti vankaya; $15); and slow cooked masala okra ($15), but I want them all. Together. Now.

To call the cooking at Southern Spice “sophisticated” is to devalue Indian cuisine as a whole: the myriad variety of dishes from the subcontinent have been refined, tempered and mastered for centuries; it is sophisticated by its very nature, and naïvely underestimated. Southern Spice offers complex food worthy of its ancient ancestry, precisely prepared by vastly talented chefs. Whatever their names might be.