Smoke & Donuts is poised to take its food truck success to the next level. By Jennie Hess 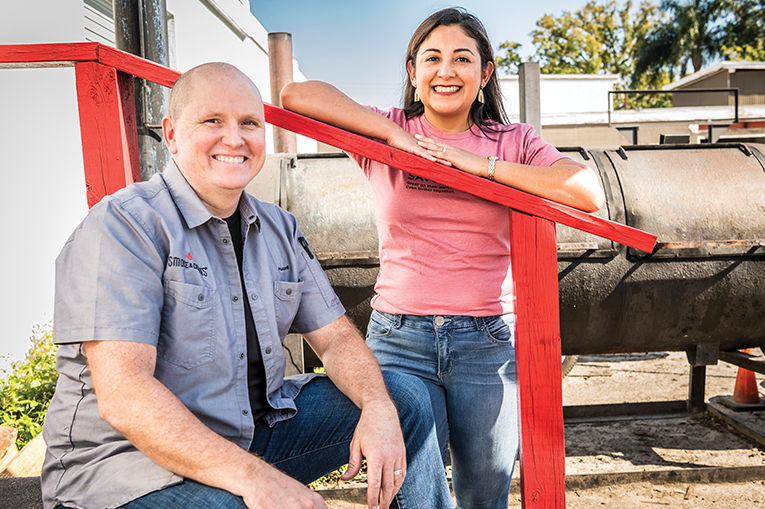 Chef Ian Russell and wife Juliana Peña in front of one the Smoke & Donuts’ barbecue pits at the restaurant’s catering location. (ROBERTO GONZALEZ)

In early 2020, someone asked Chef Ian Russell if his Smoke & Donuts food truck served a Cuban sandwich. Here’s how he rolled: “I said, ‘no, but I do love Cubans. Let’s give it a shot!’” recalls Russell, an alumnus of the Culinary Institute of America (CIA) in Hyde Park, N.Y. “It’s on a Cuban roll from Olde Hearth Bread Company. It has Virginia ham and, instead of roasted pork, it has our barbecue pulled pork, Swiss cheese and pickles—but not a dill pickle. Our pickle is a white wine vinegar house-made pickle. We made a dill mayonnaise and added Heywood’s mustard [James Heywood, the late, longest-tenured faculty member in the CIA’s history, famed for his mustard recipes].

“So, I assembled a Cuban with the ingredients I had on hand, targeting as classic a style as I could get. And we did it on the fly that day.”

The Bar-B-Cuban has been on the Smoke & Donuts menu ever since. And it will be among barbecue favorites served when Chef Russell and his team have the grand opening of their new restaurant and catering facility later this year in Orlando’s trendy Milk District.

Russell, 42, strolls through the shell of a concrete structure on Primrose Avenue, his enthusiasm building like that of a child on Christmas Eve.

His arm sweeps overhead as he describes plans for new industrial lighting and an exposed corrugated ceiling with a rustic vibe similar to Fette Sau, a New York City barbecue joint that’s a favorite of Russell’s. His grin widens as he points to the future location of the show kitchen, carving station, donut display, and five-seat beer and wine bar. Expect funky splashes of color throughout, he says. And plenty of room for barbecue fans. Tables inside will seat 40; another 36 seats will offer alfresco dining with a southern exposure. Against the north wall of the 2,300-square-foot structure that once housed a gourmet popcorn shop, Russell plans to install 1,000-gallon and 500-gallon barbecue pits.

“Being in the Milk District is the actual, physical realization of many, many dreams,” Russell says. “We cannot wait to open our doors and offer a table, bar stool or picnic bench to our guests!”

Baking chocolate chip cookies at age 7 with his mom sparked Russell’s early interest in cooking. He dreamed of a career in the culinary arts and got his start in 1999 when he began working in the kitchen of Wild Orchid in Annapolis, Md. “I loved it. I had a ton of fun,” says Russell, who lived on a sailboat before moving to New York in 2001 to cook at restaurants in Brooklyn and Queens.

He got sidetracked a year later and wound up working with his brother, Kyle, to design and build fashion-industry photo-shoot sets. He continued to cook for fun, though, and got creative in the kitchen with his treasured copy of The Professional Chef, the CIA’s cooking bible.

As the carpentry business slowed in 2007, Russell reignited his dream of a culinary career.

“One night, on a whim with my brother, I sent in the first application to the CIA, thinking there was no chance I would get in,” Russell says. He had been home-schooled all his life, never setting foot in a classroom. When the CIA accepted his application, “I was totally terrified. But I was also super psyched.”

In 2009 at age 30, he graduated with high honors and moved to Orlando to work in the hospitality industry, later meeting Juliana Peña, whom he married in 2017.

A Sweet and Salty Beginning

In 2015, as their romance progressed, Peña traveled on business frequently and often visited large cities where boutique donut shops began popping up.

“She’d call me and say, ‘Babe, you wouldn’t believe it, but in Chicago, there’s this place with pistachios and sriracha on their donuts!’ True to her love of donuts and her desire to share, she would carry them back on her lap on the plane,” Russell says. “She said, ‘You know what we should do? We should do a little pop-up at the farmer’s market on weekends. And we should do donuts because there are no boutique donuts in town.’”

At the time, Russell was working as a wine industry representative, traveling around Florida and speaking at wine events. In his free time, he was studying the science of smoking large cuts of meat “low and slow” for optimal flavor and tenderness.

“I didn’t study that at the CIA. I was very comfortable cooking French cuisine, Spanish cuisine, and modern American-style of cuisine,” says Russell, who did his CIA externship at Maryland’s VOLT with Top Chef breakout star Bryan Voltaggio. “But I was totally blind to

When Peña suggested a donut pop-up, “I said, ‘Let’s do a barbecue pop-up!’ And she said, ‘Let’s do donuts.’ I said barbecue. She said donuts,” he says, laughing about their final compromise. “We both got our way.”

On July 1, 2017, they launched Smoke & Donuts in the parking lot of a brewery, hauling equipment in a utility trailer. They sold out consistently at pop-ups. In late 2018, Russell quit his day job and bought a food truck. By 2019, he launched his catering operation out of a College Park warehouse kitchen. The menu grew with offerings that expanded on a fan favorite: brisket sliders—chopped brisket with toasted guajillo sauce on a vanilla-glazed, sea-salted donut. In 2019, scrapple sliders—a throwback to Russell’s Maryland childhood—hit the menu. The food truck found homes outside Digress Wine Bar and Belicoso Cigars & Café, finally landing in July 2020 at A La Cart Street Food & Craft Beer.

Peña recalls her early optimism about the concept of sweet and savory. “What sealed the deal for me was one our dear friends saying to us: ‘This is it!’” when he tried the donut slider. And here we are, almost six years later opening a brick and mortar.” 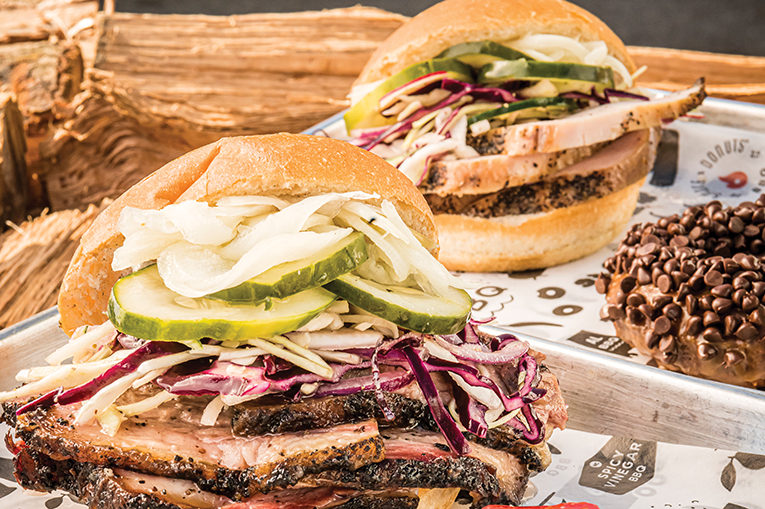 And those sides! Russell’s roasted and smashed potatoes gremolata are spud revelations. His mac and cheese made with two cheeses from Mexico, beer, crema, and mayo is a menu staple. For the grand opening, he’ll be adding cheesy grits with fontina, cheddar, sweet potato, chipotle and pickled red onion relish finished with a cilantro and scallion sauce. Seasonal braised greens and street corn rice also are on tap.

“Sides are an area where we can go off book a little bit and play with the classics,” he says. “One of the things that differentiates us is that we stay festive and playful in terms of what we offer.”

Despite the variety of donuts already sweetening the menu, Russell plans to play with those, too. “Just a plain cake donut on its own is a canvas, right?” A canvas for bourbon and maple, candied lemonade and Nutella, chocolate chips and Heath bar with brisket burnt ends, Chantilly cream cheese, strawberries, smoked sea salt and more. The possibilities are endless.

“For me, the magic of a donut is that straight-from-the-fryer, still-crunchy on the outside, soft on the inside, kind-of-falls-apart-on-you style of donut,” he says. “I think we’ll always be adding new donuts. Always!”

Inside The New Ownership at Charlie's Bakery