Slate of the Art

Whether cooking snapper or spoonbread, Slate’s Dominic Rice is a master of textures and tastes—and he operates a mean oven.

A stroll through Slate, a relatively recent addition to the plethora of restaurants on Sand Lake Road, will reveal lots of wood and brick (I’m a boy from the Northeast, I like brick), an array of banquettes and tables, and casual bar seating around the open kitchen, grill and, well, bar.

And then you round a corner and encounter the massive, hypnotic copper oven, a burnished wood-burning work of art that glows from reflected light, and from which emerges roasted entrees and pizzas that are just some of the delights at this farm-to-table kitchen. 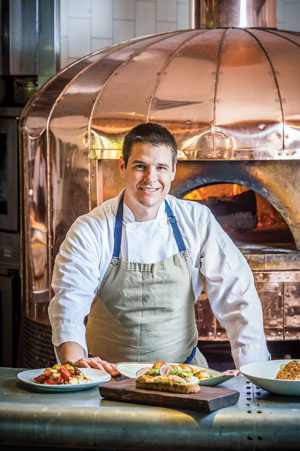 Chef Dominic Rice has a most unusual background for restaurant work. The 37-year-old Rice studied criminology and sociology at the University of Florida, and brings an empirical eye to Slate, a kind of CSI cookery. “I was an Alton Brown fan on Food Network,” he says. “The science and techniques of cooking appealed to me.” And propelled him to become a chef. He enjoys dissecting a dish and finding contrasts in feel and flavor.

“I don’t want my cooking to be too cerebral,” he says. “But I think about the placement on the tongue: the acid, the heat, the crunch. Different texture combinations, not all soft and not all hard.”

Rice, born in Michigan and raised in Sarasota, calls his cuisine a Southern twist (“Almost Californian,” he says), and seems to have a particular affinity for soft textures. An avocado toast starter ($12) tops hearty potato bread with an avocado mash and a spread of both creamy and sliced smoked salmon, accented by thin circles of radish and pops of savory brown mustard seeds.

The ever-changing menu is divided into Start, Lighter Fare, Pizza/Pasta and Mains sections, so you can grab a quick bite or stick around for heartier fare. Portions are sizable in any case; the dry-aged beef burger ($17) is jaw-bustingly large, a savory blend of cuts topped with earthy Gruyere and house onion jam.

That compelling oven, a construction of Winter Park fabricators Champion Sheetmetal that wouldn’t look out of place adorning the roof of a Victorian mansion, turns out dishes like the hearth-roasted Gulf Coast red snapper ($26). My serving, on this particular night, should have spent a couple of minutes less time in the hearth, but the flavors were still exactly right, with a mild freshness that belied its saltwater habitat. A mound of zucchini “noodles” was plain in comparison, but excelled as a base for the tangy lemongrass crema that lapped against the snapper. The accompanying cornmeal spoonbread was creamy, soufflé-ish and superb, so expertly cooked that I wanted to order seconds and thirds. “I have to admit, the spoonbread is my favorite thing in the restaurant,” Rice says. “That will always be on the menu somewhere.” 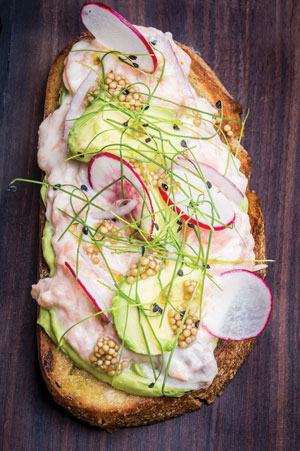 Continuing the texture theme, the mozzarella burrata appetizer ($14), is served broken, rather than in its more familiar whole oval form, so the firm cheese skin is bathed in cream—a burrata in reverse—and topped with intense oregano-infused olive oil and surpassingly fresh Waterkist Farms tomatoes from Sanford, some so small they could be called micromatoes.

As for pizzas… frankly, I wouldn’t head to Slate solely for pizza. The crust, made with good Italian OO pizza flour, is more a vehicle for toppings than a serious pie (my pizza snobbery is showing, I’ll admit) but it is a hearty bread with good, wood-roasted flavor. We ordered a plain, off-menu, cheese and sauce Margherita ($12) and it would make a fine starter; other choices include a piquant pepper pie ($14) with pimentos, spicy cherry and shishito peppers atop a Calabrian chili sauce, and a fennel sausage variety ($15) with house-made meats and mushrooms.

A graduate of the Orlando Culinary Academy (aka Le Cordon Bleu), Rice has cooked at Jean-Georges, The Tipsy Parson and Narcissa in New York, and Luma on Park in Winter Park. Almost everything on the menu is done in-house, including charcuterie, dressings and the pizza dough. Bread is from Olde Hearth and Winter Garden’s Pane D’Or.

“Farm to table, farm to plate—whatever the term is now—has become very popular,” he says. Servers at Slate introduce the restaurant by saying “We are a farm-to-table scratch kitchen.” But Rice says he endeavors beyond the buzzwords. “I want to utilize the community,” he says. “Local farmers put heart and passion into what they grow, and I want to support that. We use the small guys as an investment, for the best possible product, and to represent the area and be proud.”

The restaurant offers plenty of room to lounge, either inside around the fireplace or on a patio that opens to the outdoors. High wood ceilings are lit by lovely open flame chandeliers, which I’d guess must have required some fancy talking to get approval.

Slate combines intimacy and casual dining with greater success than many Restaurant Row establishments, and treats the farm-to-table description as more than just a trend. Pay them a visit.

Slate is a cooperative effort among local real estate developer Unicorp, design firm The Johnson Studio (which designed Prato) and Concentrics Restaurants, which has developed or managed eateries across the country and locally, including Luma on Park and the new SOMM wine bar on I-Drive. A highly attractive part of the location (aside from the Trader Joe’s next door) is the complimentary valet parking.