These five chefs operate somewhat under the radar. But their creations are high-flying taste sensations. 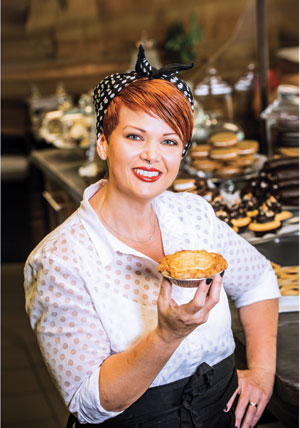 Baker, pie maker and bandanna-wearing icon Trina Gregory-Propst likes to push the limits of food you think you know. Her small, acid-green-painted shop at the corner of North Primrose Drive and East Jefferson Street has become a popular neighborhood destination, serving breakfast and lunch that, as the sign says, is savory and sweet.

Very much like her life. Gregory-Propst isn’t shy about telling her “seven bites” story—of the rigors of gastric bypass surgery and her quest to rediscover food, seasoning and flavors by limiting herself to seven bites at a time. At 40, she returned to school and spent three years in Valencia College’s culinary program. “I graduated on May 2, 2013,” she says, “and signed the lease on this place May 3.”

With an almost Asian sensibility of taste combinations, she cooks hand-made moon pies, cupcakes, luscious biscuits and gravy, statuesque cakes and a chicken pot pie that could teach a few local chefs about proper crust making.

“How much salt can I actually get in it?” she muses about taste combinations. “How much savory?”

Gregory-Propst is that rarest of residents: a local, who grew up in the Lake Como area. “My grandparents used to take me to this very spot for lunch when it was Sandwich King.” 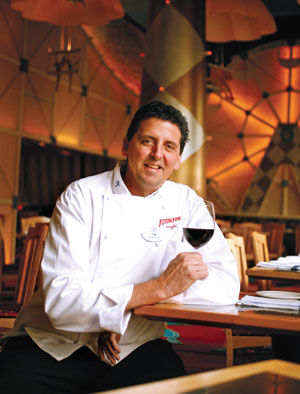 “Relationship’’ is a word that comes up a lot in Tim Keating’s conversation.

While operating under the exacting parameters of the Disney organization, Keating runs Flying Fish at the BoardWalk resort as close to an independent restaurant as possible. “I can change my menu every day. The steak, snapper and crab cake—they’re the constants; everything else revolves around what I want to cook, today.”

A longtime champion of local ingredients, the four-time James Beard Best Chef Southwest nominee works hard at connecting with nearby suppliers. “A relationship with the farmer, that’s my motto,” he says. Even if the farm is in Ocala, or in nearby Epcot’s Land Pavilion, which supplies 80-plus crates of fish and hydroponically raised vegetables each week.

Born in New Jersey, Keating spent his summers in the Cape May community of Seaside Park, washing pots at the Top of the Mast restaurant (“a real Jersey ‘family’ restaurant, if you know what I mean”) when he was 13.

“I don’t have a degree,” says Keating, 56, who went to college on a basketball scholarship. “The kitchen was my school. I don’t ever expect to graduate.” His professional career began in Southern California, and after 16 years in prestigious Houston hotels and a stint in Miami, he came to what he calls “my favorite restaurant,” the Flying Fish Café. Now, almost eight years later, he continues to satisfy diners at the sometimes overlooked café with perfectly prepared risotto, clams from New Smyrna Beach, or that enduring favorite, potato-wrapped snapper.

Defining Dish: “How can I pick just one?” Keating asks. “Would you ask Picasso to pick his favorite color?” 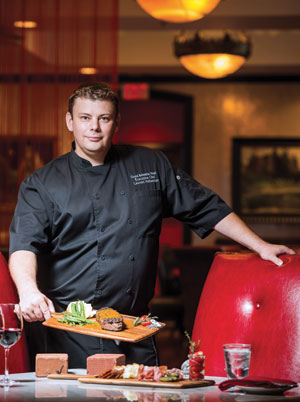 Chef Hollaender comes from Strasbourg, a French town that borders Germany both geographically and culturally, where food is a family tradition to be upheld. His father and grandfather were chefs; his brother is a chef. Hollaender, 39, grew up in the family butcher shop. His mandatory service in the French army placed him not on the field but in the kitchen, cooking for high-ranking generals.

“My two loves,” he says, “are soccer and food. I thought of being a professional soccer player when I was six. Good thing I stayed with food.”

Years in restaurants in Dallas, London, New York and Washington, D.C., including his reign as chef for the D.C. National Democratic Club, led to an executive chef position for the Art Deco-adorned Grand Bohemian Hotel Orlando in January 2012.

Hollaender’s menus touch on his native dishes: escargot, classic mussels marinières, rustic sausage and pâtè, and the tarte flambèe, a thin-crust pizza native to Alsace that he perfected during his service at the acclaimed L’Actuel restaurant in New York. “My oven cooks the tart in two minutes,” he says proudly. He also presents one of the best Sunday brunches in town. 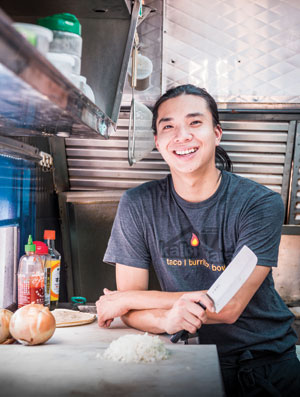 “My life was always food,” Lai says. Born in Taiwan, the youthful-looking 27-year-old grew up in his father’s restaurants, including the Golden Train in Kissimmee, housed in a replica passenger train, and worked at Dad’s Asian Harbor in Orlando when he was 15.

Lai and fellow University of Florida student Herbert Tinjaca (Lai didn’t graduate) took inspiration from the success of Roy Choi, whose Kogi truck in Los Angeles became the model for the modern food truck revolution, and hit the road with Kalbi Hau5 in August 2011. An engine fire late last year took out the business, but it was reborn (“It’s a much nicer truck now”) this past April.
“Sushi and Asian food is my passion,” he says. Lai’s popular creations are served in rice bowls, tacos or wrapped in burritos, multi-cultural delivery systems that support grilled short ribs bathed in garlic sesame-soy marinade, Korean sesame-red pepper coated chicken and kimchi quesadillas. While sushi has yet to appear on the Kalbi menu, Lai works at Seito Sushi when not behind the truck’s window.

For Lai, the best part of the truck is the ability to put new spins on Asian food. The worst part is still cleaning the truck at 5 a.m., long after the adoring foodies have departed. 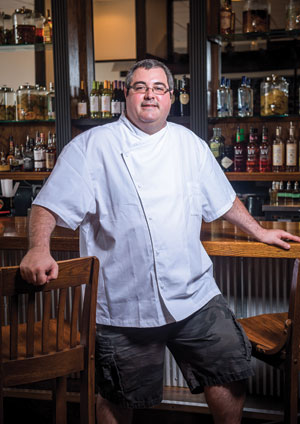 A classically French-trained chef cooking out of one of Orlando’s first food trucks pulls up his wheels and starts smoking ribs.  St. Petersburg native Balluff is that chef, schooled at the French Culinary Institute, trained at Michelin-starred Per Se in New York. He established his local credentials at Luma, the Funky Monkey Wine Company and Draft Global Beer Lounge. Deep South magazine ranked his Fork in the Road truck as one of the best food trucks in the South.

So what’s with the turn to pulled pork?

“Do what you love,” the 32-year-old Balluff says. “A restaurant was always the goal.’’ The much-loved truck still exists for private catering, but Balluff took the sudden and serendipitous vacancy of a former Holy Smoke BBQ location in a Curry Ford Road strip mall as a portent of his next venture, and opened the smokery this past June. Now he plies his farm-to-table talents by brining pork belly for seven days and serving house-infused gin and whiskeys at the bar.

His “customize your ‘cue” chalkboard features items available by the quarter-pound, like slow-smoked brisket, meaty St. Louis ribs and hot peppery jackfruit for vegetarian customers, ready to be smothered in five kinds of house-made sauce, ranging from tangy Alabama white to Texas spicy red. “Even with only two actual sandwiches on the menu,” Balluff says, “you can have it 18 different ways.”

Southern Moon is the first of several concepts he’ll be launching; after the rigors of food on
the road, stationary restaurants will seem easy.

“The food truck,” Balluff says, “is the hardest thing I’ve ever done.”

Defining Dish: All of them. “Everything I do here is from scratch, from bread to baked beans, all done unapologetically our way.”

This article appears in the September 2014 issue of Orlando Magazine.
Categories: Culinary Spotlight