A restaurant veteran takes an upscale fish camp vibe and runs with it.

The revolving door that is the restaurant business moves so quickly that you can feel a breeze. The cost of equipment and permitting is so high that, very often, a new eatery will move into a space just vacated by another, but usually the old one has simply closed, leaving customers to reminisce about favorite meals.

Imagine, then, how difficult it must be for a place like Reel Fish, the new “coastal kitchen” restaurant in Winter Park, to inhabit a space left by the almost legendary Ravenous Pig, particularly when the former tenant simply moved a half-mile down the road.

“We’re in the hallowed halls of Ravenous Pig,” says Fred Thimm, owner/manager/menu developer/idea man of Reel Fish. “What I want to create here is a neighborhood joint with great food, casual dining for people with a more discerning palate.” 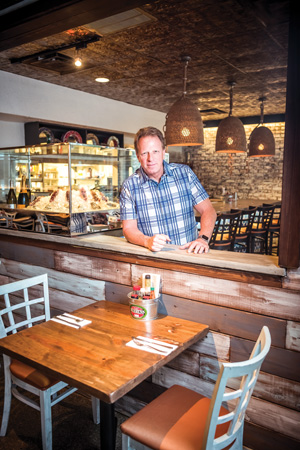 When you look at the menu, there are notes of classic fish camp coupled with Park Avenue: fish dip, but here made with house-smoked, lightly flaked trout, mixed with matchsticks of green apple ($8). My companion thought the apple was a distraction from the remarkably good, subtly flavored fish, but I quite liked the brightness it brings to the dip. I would have rather seen a half-sleeve of good saltines than the individually wrapped (and generally broken) crackers, but that’s easy enough to overlook.

A self-proclaimed “Yankee in the South,” Thimm is something of a big deal in the food business—former positions as CEO of The Palm restaurants, president of Stoney River Legendary Steaks, president and chief executive of the restaurant division of Al Copeland Investments (the originators of Popeyes Chicken and Copeland’s of New Orleans). Thimm moved to Orlando in 2012 for a gig as International VP and COO at Hard Rock restaurants.

“Being in Florida made me realize how much you need to go through to get fish on the table,” he says. After 30 years in corporate food, it’s curious that he can now be found in a fairly small upscale fish camp in Winter Park, and I think only Thimm himself will ever know the full story. “In the wake of my departure from Hard Rock,” he says, “this was a crossroads. All my life, people have said you should open your own restaurant—I’ve been waiting tables, bartending and working in kitchens since I was 14.”

In a way, his experience with theme restaurants has carried into Reel Fish—coastal fish camp is, after all, another theme, and not coincidentally a hot national trend.

“The ideas, the menu, is mine,” Thimm says, drawing on a magpie lifetime of traveling, eating and collecting menus. “I brought in a couple of guys, chefs I’ve known and worked with for years, to test out recipes.” Michael Hufler, a graduate of the Culinary Institute of America, veteran of the Atlanta food scene and original chef at Houston’s, and Michael Zajac, a restaurant consultant and onetime owner of the acclaimed High Cotton in Atlanta, worked with Thimm to fine tune the concept.

There are things that may benefit from further tuning: I didn’t care for Mike’s All-Day Fish Chowder ($7 bowl), a tomato-based Manhattan-style broth that left me cold. And the ceviche, proclaimed as their most ordered item, was on my visit slightly bitter, which I attribute to the quality of the citrus marinade and am assured has been addressed.But what they get right is strong and worthy of repeat visits. Their takes on “fish camp classics”—fried shrimp, scallops, oysters or fish—are flawlessly cooked, with a light, slightly salted batter and the taste of the sea ($15-$22). Reel’s fish tacos ($12) stray a bit from the Florida coasts (perhaps there’s a local variant of Baja), but the satisfying fish chunks dressed in pineapple salsa and jalapeño lime mayo overflow their vehicles, so who’s complaining?

With Winter Park Fish Company and the relocated Pig just steps away, is that too much seafood in one stretch of Winter Park? “You get used to competition,” Thimm says. “It’s part of the deal. One steakhouse opens and five years later there are 10.”

Thimm says he wants to bring the coastal Florida experience, found in places like New Smyrna and Sarasota, inland. “That Florida Southern attitude,” he says. “That respect for fish, we want to offer that to everyone.”

Reel Fish has the potential to grow into a powerhouse. I think the ghosts of meals past won’t hang around for very long.