Much has changed at Flying Fish. And the new cuisine created by Chef Tim Majoras is magnificent.

Tim Keating’s acclaimed 10-year residence at Flying Fish Café ended in January 2016, when Disney’s refurbishment eye lit on the revered restaurant and the chef, a four-time James Beard Award nominee, decided to spread his wings. After a six-month redo, Flying Fish was reborn under the command of Ohio native Tim Majoras, who has been in the FF kitchen since 2011.

The transition was echoed in the design and even the name of the restaurant. The Atlantic City atmosphere that resonated with Jersey boy Keating featured roller coasters, Ferris wheels and a parachute drop chandelier. It was fun and noisy and had a carnival energy along with its unmatchable food. Along with the removal of “Café,” the design has segued from Boardwalk to Pleasure Palace, as if we’ve stepped  from the midway into gilded private dining. In the new FF, glass fish navigate overhead through a sea of transparent bubbles, colors have shifted to deep sea blue, and glowing banks of golden bottles accent the bar.

But changes in décor are minor when compared to having a new chef in the kitchen, and Chef Majoras has taken to the challenge with superlative ease. 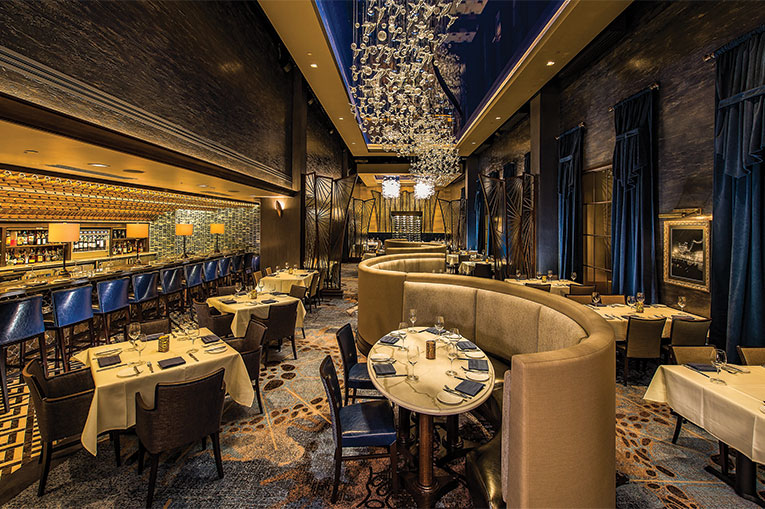 From Bowling Green, Ohio, a town best known for its National Tractor Pulling Championships, Majoras is on a continual journey of discovery.

“I grew up with the Midwest mentality,” he says. “My grandfather came through Ellis Island from Palermo, Sicily. He was a commercial fisherman, pulled walleye right out of the Great Lakes. So it’s ironic that here I am, at Flying Fish. When I moved down here to Florida, all these beautiful fish were like seeing all the colors of the rainbow.”

Majoras came to the Orlando Culinary Academy (Le Cordon Bleu) when it opened in 2005. “I watched PBS cooking shows when I was 11,” he says. “Orlando offered so much more than Ohio.” He spent a year in Chicago working for Tavistock, then returned to explore opportunities at Disney.

Flexibility is key when planning a trip to FF—a stunning dish from one visit will likely be replaced by another, equally delightful one upon your return. The menu adapts to the seasons and availability, continually reinventing itself. Items like a platter of Cedar Key clams, rock shrimp and Florida coast grouper take full advantage of local specialties. “I watch the supply chain,” Majoras says. “I take the sustainability situation seriously.”

His eye for detail extends to the bread, a seaweed-enhanced sourdough developed with Olde Hearth Bakery that is an unmistakable work of art. Any evening that begins with this caliber of bread has to be outstanding, and each meal lives up to that opening promise.

The blue crab bisque ($15) is one of the world’s great soups, generous jumbo lump shellfish laced with sherry and dolloped with tarragon crème fraîche, a sensuously fragrant mixture.

While an extraordinary Angus New York strip and slow-braised pork tenderloin are available, I come for fish, fish and yes, please, fish. A crab cake appetizer made from Maine Jonah crabs ($17), is big, moist and crispy pan fried, with rich slaw and a spicy rémoulade. The plancha-seared Hokkaido scallops ($43) are so perfectly cooked it’s as if they were born sautéed, cushioned by Anson Mills coarse grits and a beautifully contrasting tart peppadew emulsion. Sustainable sea bass, Atlantic skate and line-caught yellowfin all float through the menu.

Chef Majoras calls his Maine lobster nero pasta “me on a plate.” Lobster, poached in butter and fennel, is highlighted by squid-ink pasta, baby artichokes and a practically luminescent golden tomato sauce ($59). The dish reflects back to meals shared at his grandmother’s Sunday dinner table by his family in Ohio; something to be savored and relaxed over.

Like its well-dressed cousin, Victoria & Albert’s, Flying Fish sources the world for items such as Carabinero prawns from Spain, New Zealand salmon and heritage kurobuta pork from Idaho. A special order caviar service features sturgeon ostera from the Sarasota area, lightly salted in the malossol manner, for a mild and fresh-tasting presentation along with local microgreens, salmon rosettes, fresh grated wasabi, tiny blini and a reconstructed hard boiled egg.

The restaurant has a remarkably diverse offering of cheeses for those who prefer a before- or after-meal nibble, including coffee-rubbed Beehive Barely Buzzed from Colorado, French Brillat-Savarin and Californian Truffle Tremor.

A five-course menu is presented at the 12-seat “Chef’s Counter” area directly in front of the open kitchen, crafted at the whim of the chef and always a surprise.

When I asked what he could do in this kitchen, and how much autonomy he has in a Disney-operated restaurant, Majoras answered with a simple statement:

What the new Chef Tim desires is to shepherd a restaurant where each visit is as good as your first, and I think he might get his wish.

AbracadaBAR, the cocktail lounge adjoining Flying Fish, nestles in a former sweet shop, a plush, velvet-draped room supposedly the scene of a mass disappearance of the great stage magicians of its age. The  lounge is filled with artifacts to peruse while specialty cocktails, like the color-changing Conjurita, are served with a touch of prestidigitation and some remarkably bad jokes.